In the cubicle that serves as Owen McKagen‘s kitchen, there’s a box the size of a cat’s litter pan. A couple of coleus are sprouting out of it. It’s on top of a grey plastic garbage can that’s filled with 25 goldfish. Make that 24 goldfish — one of them is no longer with us.

The fish are swimming in the can because one of the glass panels in the aquarium has a fatal crack. Owen’s crude setup is an aquaponic garden.

The idea behind the sustainable food-production system is as simple as ABC: The fish and the plants feed off each other to survive and thrive. 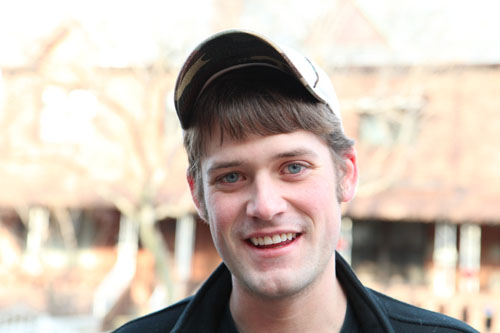 Photo by Nancy A. Ruhling
Owen is an escapee from small-town life.

It works like this: The waste from the fish is pumped to the plants, which suck out the vital nutrients like a kid chugging a milkshake, and the clean water is filtered back to the petite pond.

“The applications are boundless,” he says. “It takes so little to create so much. Ultimately, it can solve world hunger.” 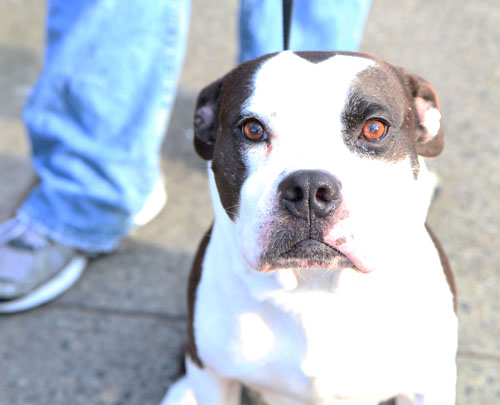 Photo by Nancy A. Ruhling
Biggs is Owen’s constant companion.

Owen, a strapping young “yes, ma’am” gentleman of the South who looks as though he stepped out of a Tennessee Williams play, aims to be a key player in the transformation. He has this bright idea to create an aquaponic device the size of a microwave that has an aquarium on the bottom and a garden on the top.

This is a far cry from Wall Street, which is where Owen always figured he’d end up. He was born in Augusta, Georgia, which gave him his gorgeous drawl, but was raised in the population-poor, church-rich town of Lamar, South Carolina. That’s where his mother, a divorcee, moved him and his two younger brothers when she remarried.

“There was never anything to do in Lamar,” Owen says. “Every single day I was there, I took a two-hour walk just to get away. I must have covered nine to 10 miles.” 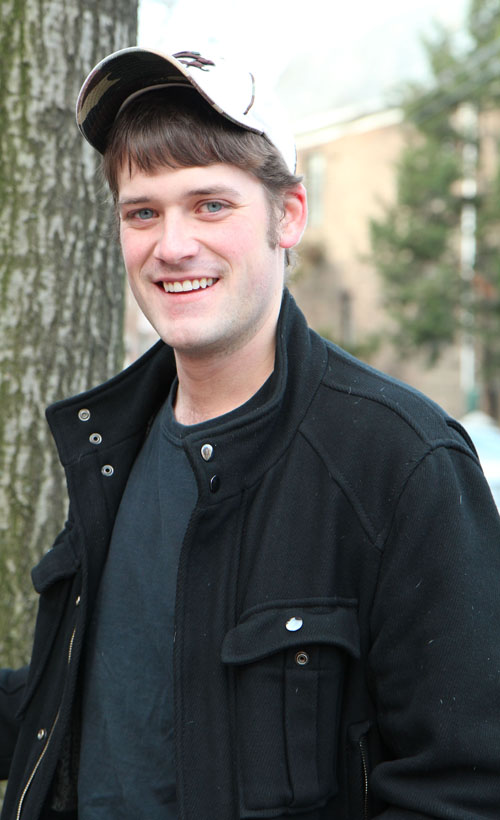 Photo by Nancy A. Ruhling
Owen spent a spell being homeless.

At 17, when he enrolled at the University of South Carolina, Owen got to live in a big city on his own for the first time. But Columbia wasn’t New York City, which is where Owen saw himself. He worked at a club and managed a restaurant to pay for his college.

He was all set for a career in high finance. He has degrees in investment finance; management/entrepreneurship; and marketing. But his future crashed with the stock market, so when he graduated in 2010, he put those dreams in the back pocket of his faded jeans and headed for big adventure in the Big Apple.

He took a job as a server at Mr. Biggs Bar & Grill in Hell’s Kitchen and signed up for a Steinway Street apartment that housed him and 10 roommates. When he lost that living space, he joined the ranks of the city’s homeless. 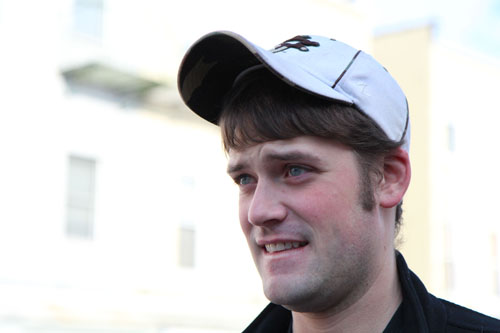 Photo by Nancy A. Ruhling
He went back home but came back to New York.

“It was shameful to me,” he says. “I didn’t think of seeking the shelters because I had too much Southern pride. I didn’t tell anybody, not even my mother.”

“During the blizzard of 2011, I spent several nights in Central Park,” he says. “All I had was a book bag and a satchel. And the Mole People took me in and made me a shelter in the storm. One time, I slept behind the Bethesda Fountain. It was the most beautiful experience of my life. It was beautiful to wake up to the shining sun when you have nothing, and you have to look for the beauty somewhere else.” 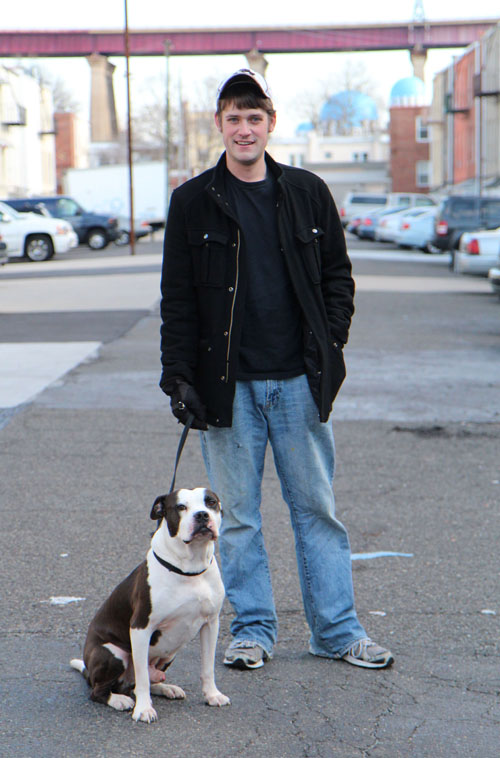 Photo by Nancy A. Ruhling
He’s betting on his aquaponics idea.

When he got back on his feet, he and a friend shared the rent on a Brooklyn apartment. After a time, Owen went back to Columbia.

“The second I left New York, I knew I had to come back,” he says. “You can’t get Muenster cheese — or anything else — at 4 a.m. in South Carolina.”

He returned late last year. This time, he has a steady job at an office and picks up extra money moonlighting at Mr. Biggs. He lives in a basement apartment. He and his roommate work opposite shifts, so it’s almost like living alone. His dog, Biggs, a loyal and loving rescue mutt, keeps him company. 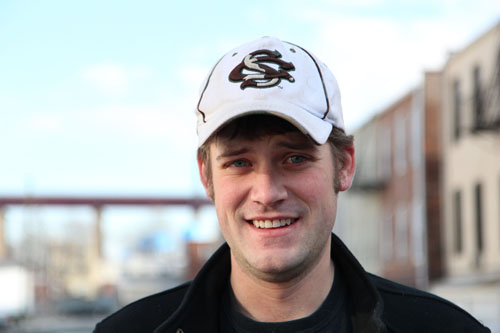 Photo by Nancy A. Ruhling
His Wall Street dreams crashed with the stock market.

His roommate made some brownies. Owen, a servant to Southern hospitality, was going to offer them, but they’re gone, so he brings out a pack of Pepperidge Farm Milano cookies and starts making tea in the fancy machine his mother sent him for Christmas.

This idea about the aquaponic garden, Owen has great faith in it. He goes to church every Sunday. He keeps the Episcopal Church’s Book of Common Prayer on top of the microwave. He means no disrespect. He doesn’t have a bookcase, and this is a handy spot. 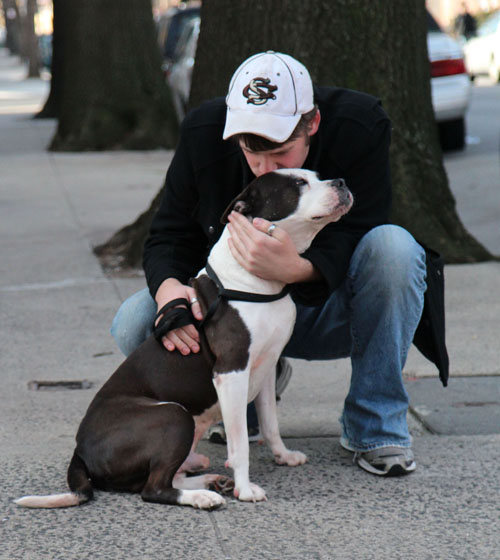 Photo by Nancy A. Ruhling
Biggs and Owen face the world together.

“Everywhere I go, everything I do,” he says, “I think about my aquaponic garden.”

The future? His crystal ball is filled with fog. “I don’t even know what I’m going to do for breakfast,” he says.

It won’t be the Milano cookies. Owen doesn’t eat sweets.