It’s not the awning. That Italian-flag green flap of fabric is pretty pedestrian.

No, what attracts attention to Cassinelli is that it’s shuttered so much of the time.

Astoria’s only pasta maker is closed on Sundays and Mondays, and even when it’s open, its front-window gate is rolled down for 30 minutes at lunchtime and again at 3:30 in the afternoon when the cappeletti and cappelloini, the fettuccine and fusilli, the ravioli and rigatoni and the tagliolini and tortellini have been packaged and packed away. 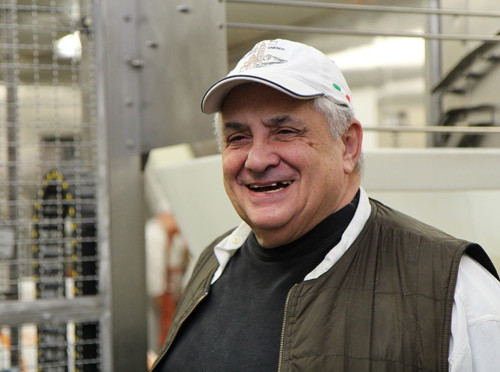 Photo by Nancy A. Ruhling
Tony’s been at Cassinelli since he was 15.

Tony Bonfigli, a big guy with a mile-wide smile, and Nella Costella, a shy, serious woman, make up the time by being there extra early. They usually are getting things ready by 6 a.m. Of course, in the old days, when they were much younger and stronger, they were willing and able to work until all hours.

Tony and Nella, co-owners and co-workers, have been together more than half a century. They aren’t husband and wife — their spouses have passed away — but Cassinelli is like their child. 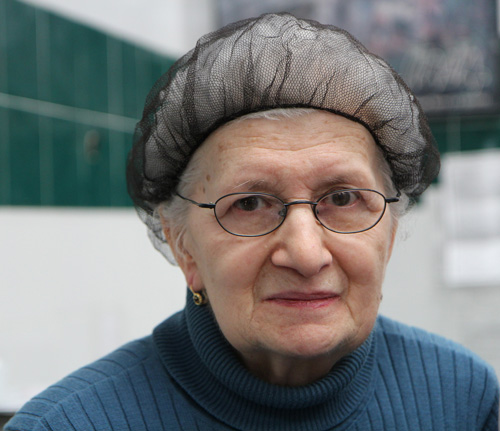 Photo by Nancy A. Ruhling
Nella was a young mother when she started making pasta.

It was Tony who came to Cassinelli first. Born in Tuscany, he and his father arrived in New York in 1956, when he was 13. His mother and brother, who were U.S. citizens, were already here.

Tony didn’t speak a word of English, so he wound up going through eighth grade again before heading to high school. 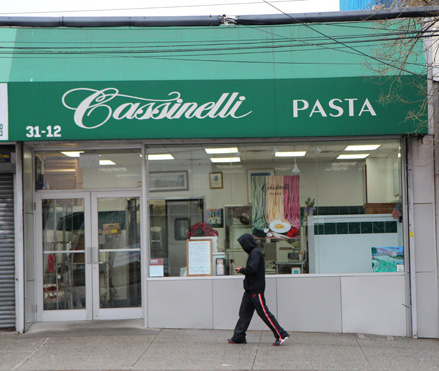 Photo by Nancy A. Ruhling
Cassinelli, established circa 1912, is on 23rd Avenue.

At that time, Astoria was home to several pasta makers. Cassinelli was in the hands of its original owners, Peter and Adele Cassinelli, and was across the street from its current address on 23rd Avenue.

Started circa 1912 in Manhattan and later located in New Jersey, Cassinelli set up shop in Astoria after the Great Depression. By the time Tony stepped through its front door, it had become a neighborhood fixture. 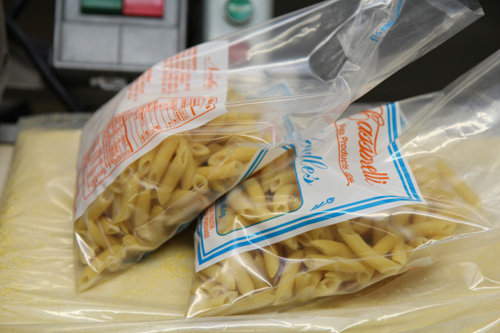 Photo by Nancy A. Ruhling
Cassinelli is served at some of the city’s best restaurants.

At 15, Tony started out washing the pasta-making machines and cleaning the floor. He liked it so much he never left.

“Making pasta really excites me,” he says. “It’s a product, it’s tangible, it’s not a piece of paper like life insurance.” 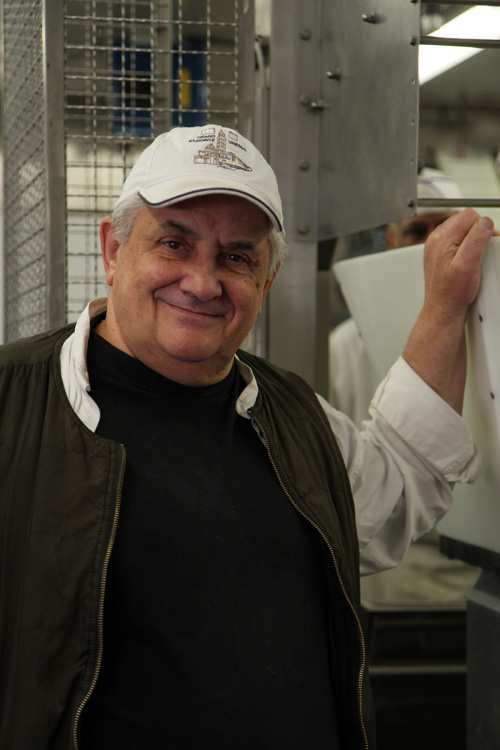 Photo by Nancy A. Ruhling
Tony loves chatting with the walk-in customers.

Nella, who was 8 years old when Tony was born, came to America from Parma in 1951, and like him, she didn’t know enough English to even say so much as yes or no. She’d already finished high school, so she took night classes to learn to speak her confounding, newfound tongue.

Until she married, she did alterations for a men’s clothing store in Manhattan. After her daughter was born in 1959, she began walking by Cassinelli with her baby carriage every day. She got to be friendly with Adele and eventually took a part-time job there. 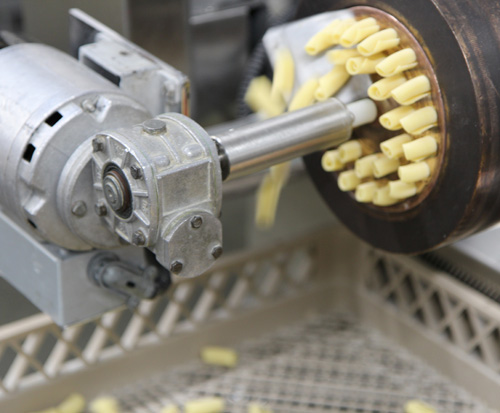 Photo by Nancy A. Ruhling
The cavatelli pasta is cut by machine.

“My first job was making pasta,” she says as she rings up a customer. “All these years later, I’m still making pasta.”

In 1972, Tony and Nella bought the business from Adele. 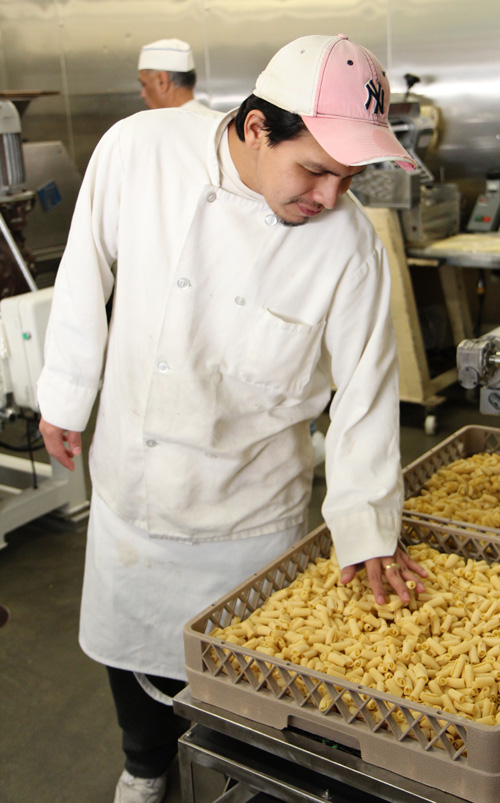 “She expressed the desire to sell it to us,” Tony says.

Pretty soon, they were working six days a week, which was a good thing because when Nella’s husband died five years later at 43, she needed the income. 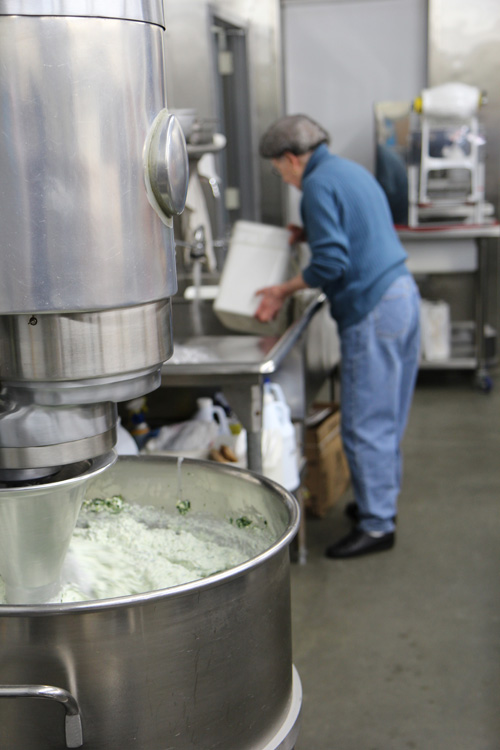 Photo by Nancy A. Ruhling
Spinach filling in the giant mixer.

These days, Cassinelli’s staff of eight makes 3,000 to 4,000 pounds of pasta a week, much of which is sold to prime retailers and premier restaurants throughout the city. The rest ends up on the tables of walk-in customers who have grown accustomed to its limited hours.

Unlike a lot of small, family-run businesses, there is a new generation ready to make noodles when Tony and Nella do decide to retire. Under the original plan, Tony’s son, Robert, and Nella’s son-in-law, Aldo Riccoboni, were going to take the helm. With Riccoboni’s death two years ago, it has fallen to Nella’s daughter, Gisel, who has been coming in four days a week, to carry on in his stead. 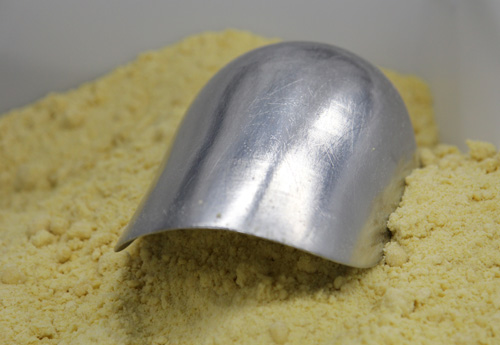 Photo by Nancy A. Ruhling
A silver scoop rests in the flour mixture.

This business of retirement: Tony, 70, and Nella, soon to be 78, have been saying for years that they can’t wait to throw in the noodles. Yet they’ve never followed through.

“I should have done it a long time ago,” says Nella. “At this age, I cannot do what I used to, but I’m still here because I like to do it.” 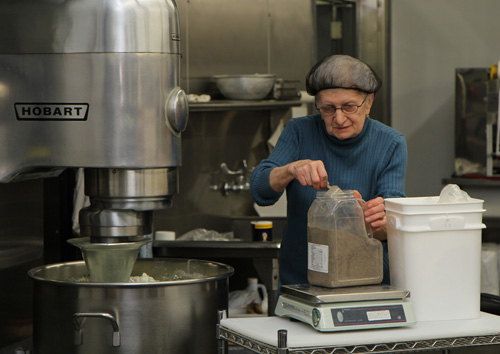 Photo by Nancy A. Ruhling
Nella’s pasta making is a delicious art.

Although she lives close to Cassinelli, she’s forced to drive because rheumatoid arthritis makes it painful to walk. Injections give her enough strength to stand during pasta making.

“I have to accept it,” she says. “The worst thing was that my son-in-law passed away.” 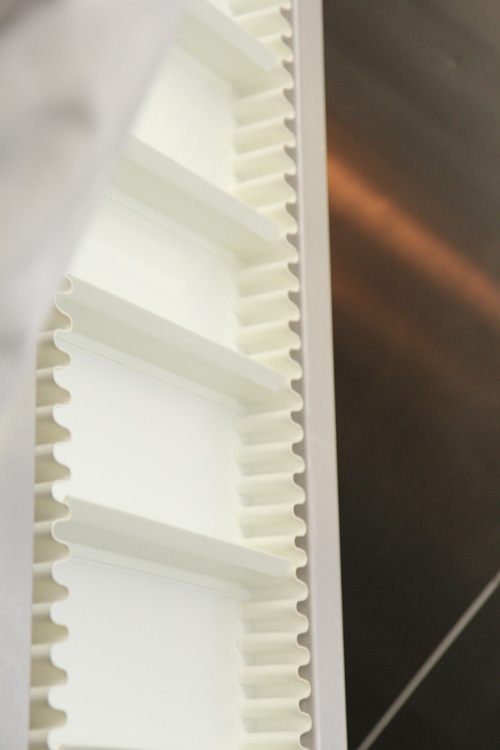 Photo by Nancy A. Ruhling
A vertical conveyor that resembles a slide sends the pasta to be packaged.

She leaves the counter when her eyes tear up, and Tony jumps in to take over.

As for him, why he can think of a least a million things he’d like to do. He owns and lives in a two-family house that needs a lot of TLC. When he’s not at Cassinelli, he likes to work in the 1/2-acre vegetable garden he’s planted at his Long Island place. Truth is, he doesn’t get out there enough. 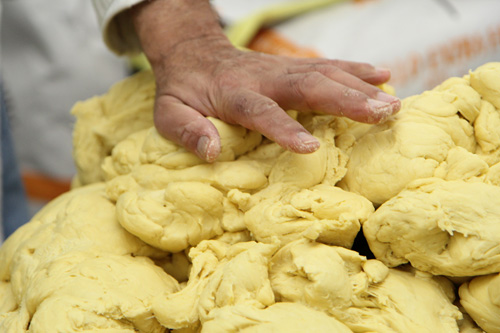 Photo by Nancy A. Ruhling
Giving the dough a hand.

It hasn’t been easy since his wife died in August, but he’s making the best of his solo situation.

“I never knew how many things she used to do for me,” he says. “In my entire life, I’ve never had to do my own laundry.”

Being at Cassinelli, where he’s a master at manning the front counter, means he has no time to feel sorry for himself.

Another customer has come in, and Tony puts on a happy face.