In a shop that has long been vacant on Ditmars Boulevard, a gleaming gold coin-shaped sign has risen like the sun.

“Cordwainers NYC” is what it says. In case you don’t know that a cordwainer is a fancy name for a cobbler, the words underneath, “Fine Shoe & Handbag Restoration,” offer a gentle hint.

The place, in the middle of a block that’s mostly residential, is meant to be as elegant as Richard Ponce is in the chic milk chocolate leather apron he’s wearing to protect his jeans and blue-and-white checked shirt. Richard, size 11 D, didn’t want Cordwainers to look like ye olde chaotic cobbler’s shop. 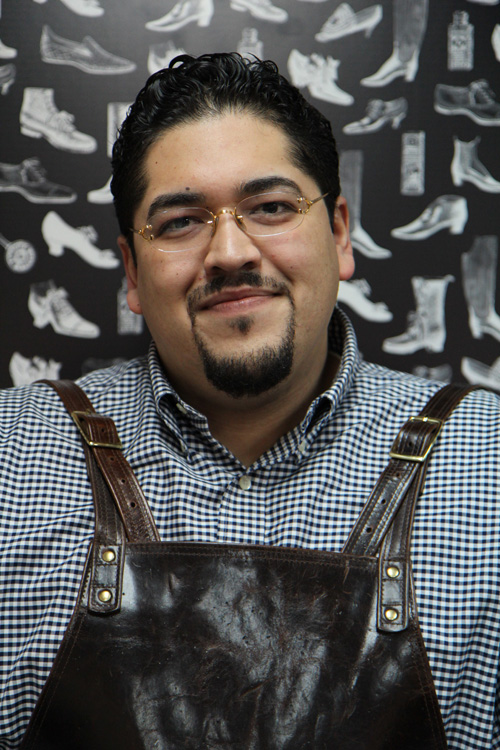 Photo by Nancy A. Ruhling
Richard, the chic cordwainer.

Upstairs, where he’s standing behind a counter that features a tape dispenser styled as a stiletto, is the showroom. Shoe-care products, from brushes to polishes to laces, are artistically arranged as still lifes on the shelves that are positioned on the newly installed hardwood floor.

Downstairs, which is hidden from public view by a pair of closed doors, is where the magic machines massage and mold the leather into shoe shape. 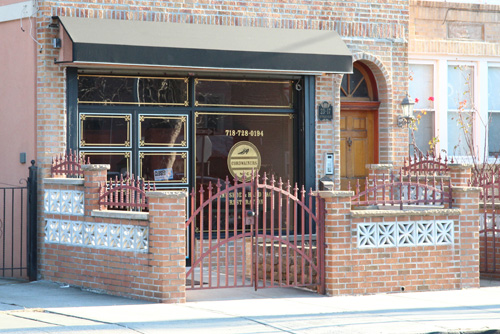 From heel to toe, it’s so quiet that you can hear one shoe then the other drop.

A decade ago, when Richard graduated from Queens College, the job market was as tight as an AAAA with a 6A heel. 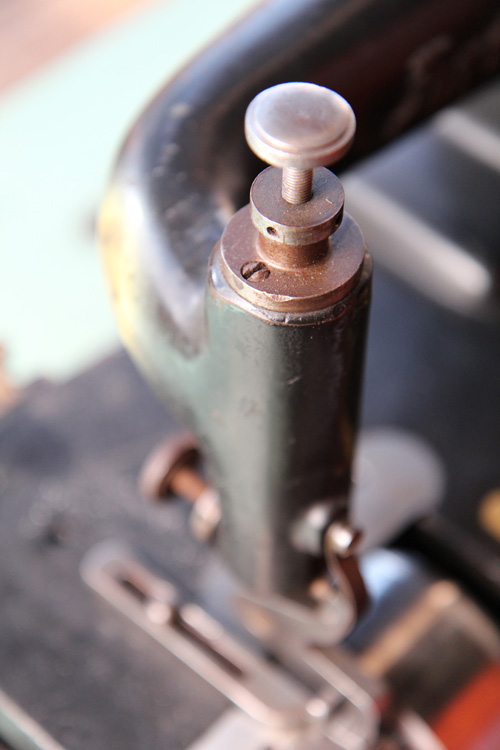 Photo by Nancy A. Ruhling
Antique machinery adds old-world elegance to the shop.

He didn’t know what he was going to do. All he had was a bachelor’s degree in sociology. And a father who was friends with a renowned Manhattan shoemaker.

That’s why Richard signed on at Shoe Service Plus (now called Leather Spa) as the customer service manager. He dealt with the famous footwear companies served by the high-end Midtown repair shop. He didn’t much like the job. 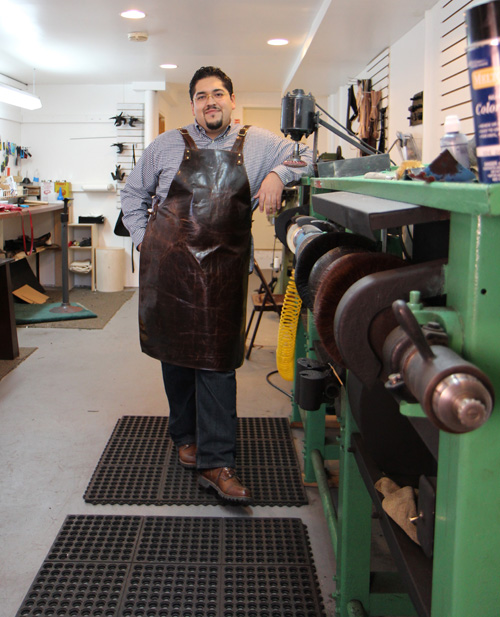 Photo by Nancy A. Ruhling
Even the workshop is charming.

“But I was interested in shoe repair,” says Richard, whose hair and goatee have the silky shine of a bottle of black polish. “I used to watch the cobbler work and ask questions.”

He started working on his own shoes — “I didn’t want to mess up anyone else’s” — and beamed with confidence when he was able to replace the rubber soles of his Red Wing/Brooks Brothers Iron Rangers. They are the ones he’s wearing to this day. 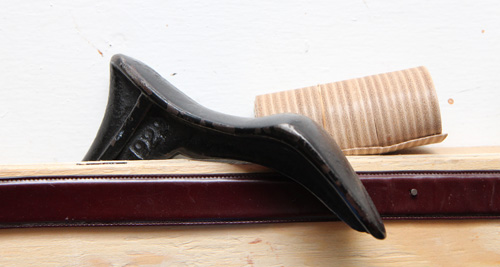 Photo by Nancy A. Ruhling
A utilitarian cast-iron shoe last becomes a work of art.

Although he eventually quit and worked in other industries, Richard couldn’t get the shoe repair business off his feet or his mind. The idea of opening his own shop danced in his head, and when he got the opportunity to buy $20,000 worth of second-hand equipment for $4,500, his commitment commenced.

“I was scared and excited,” he says. 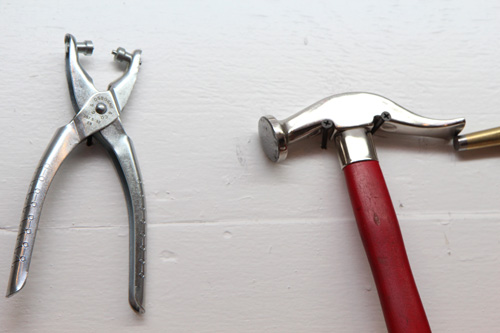 Photo by Nancy A. Ruhling
Tools of Richard’s trade include pinchers and a French hammer.

It took him two years to save the $40,000 he needed to open the front doors of Cordwainers NYC. Actually, it was a little more than that. He still has some bills to pay.

It wasn’t easy coming up with that much money. He had to move back home to Queens Village, where he and his girlfriend lived with his parents to forswear the little luxuries of life. 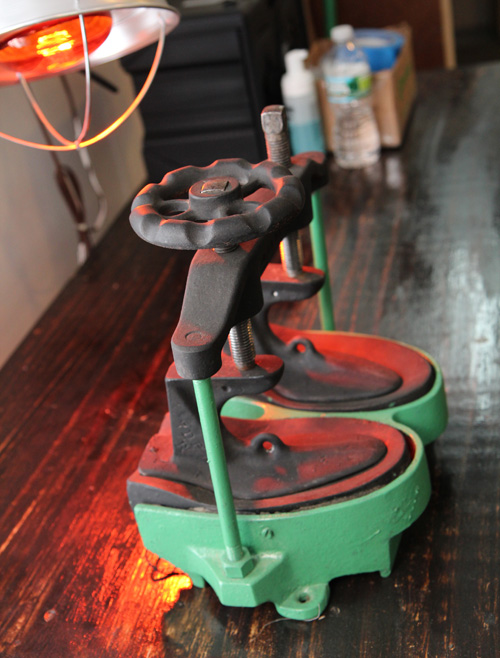 Photo by Nancy A. Ruhling
A heat lamp casts a golden glow on a cast-iron shoe press.

He chose to set up shop in Astoria, where he had once lived for a couple of years, because he liked its friendly, down-home feel. He spent two months getting the shop in shape.

“It was a labor of love,” says Richard, a tall, broad-shouldered man with shiny spectacles that match the color of the Cordwainers sign. “My father helped me with the construction.”

Although Cordwainers specializes in the restoration of quality shoes and handbags and offers expertise in retouching leather and cleaning suede and nubuck, the shop also does routine repairs that start at $3.

“The nice thing about this trade is that you get something that’s messed up that someone cares about, and you can bring back the emotional connection, the wow! factor,” Richard says. “You can see the results.” 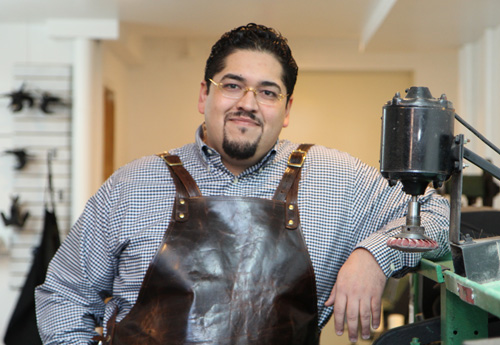 Photo by Nancy A. Ruhling
Richard has put his heart and soles into Cordwainers.

Right now, Richard is the sole worker in his sole shop, but someday he wants to hire a couple of cobblers to help out. When that time comes, he’s going to start making leather accessories like men’s wallets and money clips.

Until then, his resoled Red Wings will keep him on his feet as he works seven days a week to make Cordwainers work for him. Once he’s up and running, he’s going to move back to Astoria from Bayside so he can once again walk Max, his West Highland terrier, in Astoria Park.

Richard just knows that Cordwainers is going to take off. It has to. He has a 10-year lease. And enough spirit and enthusiasm to carry him through the next century.