Seferino Medina will be back in 10 minutes. He has to ice a birthday cake.

“Has to” aren’t the right words although these are the ones he uses. Yes, it’s his job, the one he does six, mostly seven days a week at the Broadway bakery Omonia Next Door.

But from the ballet of the batter to the pirouette of the piping, Serefino loves his job, so it’s more accurate to say that he “gets to” put the final touches on the cake.

If his English were letter perfect, and he apologizes because he’s never quite learned the lay of the lingo in the 22 years he’s lived in America, he would tell you that he “has the privilege” of icing the cake. 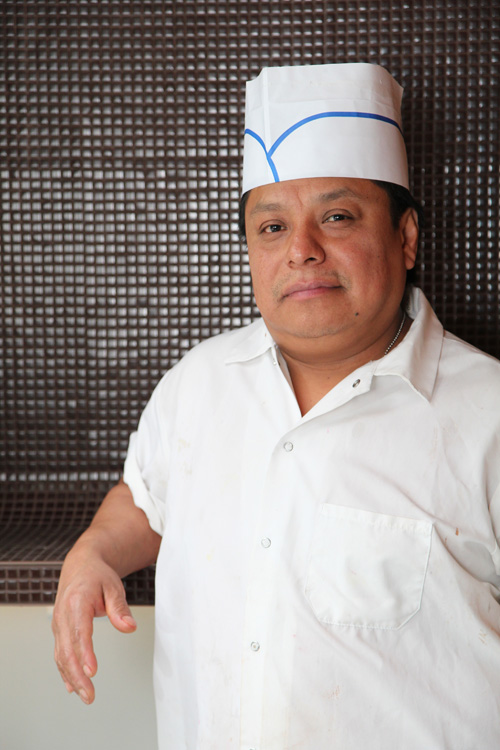 Photo by Nancy A. Ruhling
Seferino is the baker at Omonia Next Door.

The proof is in the doing. He reverently places the two-layer vanilla cake on a metal stand and brings out a batch of snow white icing that’s as light and fluffy as cumulous clouds. He plops a mound of it on top of the cake and swirls it around with a knife as he twirls the stand. He pipes fancy scrolls around the edges that look too good to eat and rings the rim with syrup-dipped strawberries.

In Seferino’s capable hands this looks easy. But it took him a long time to learn it. He’s 42, and he’s only been doing it five years. 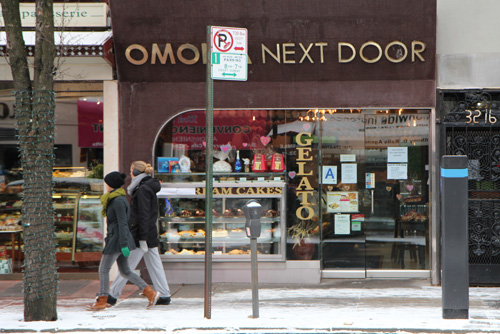 Photo by Nancy A. Ruhling
Omonia Next Door, the sister to Omonia Cafe, is on Broadway.

When he was growing up in Guerrero, Mexico, he didn’t get to eat cake. His family was too poor for such fancy foods. He and his three siblings were raised by his beloved mother, who, God bless her, is no longer with us.

“She was mother and father to us,” says Seferino, whose short stature (he can barely see over the bakery’s high counter) is dwarfed by his can-do spirit. 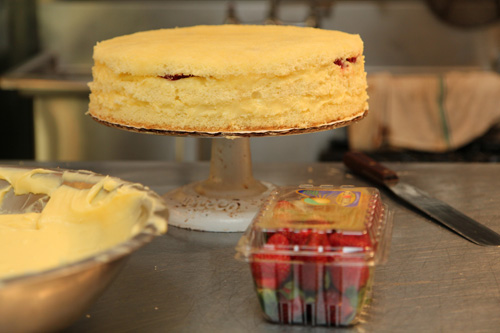 He points to the monogram — S.M.B. — tattooed on his right arm. The first two initials are his; the B stands for his mother’s maiden name and keeps him close to her.

As soon as he graduated from high school, he came to New York.

“I wanted to take care of my family, to send them money,” he says. 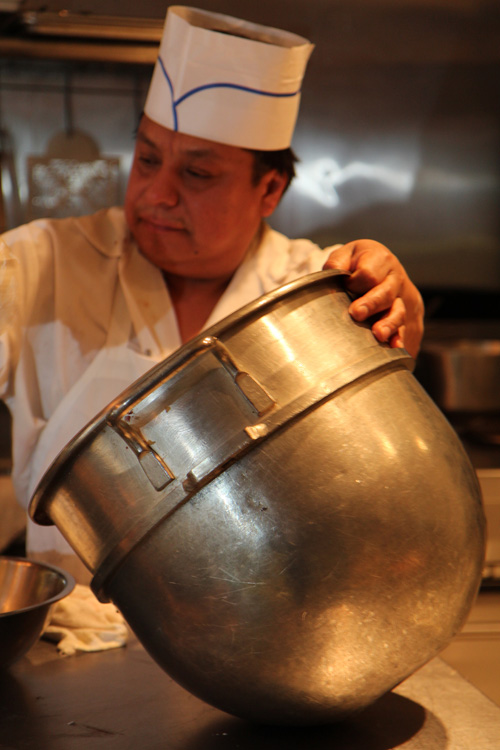 Photo by Nancy A. Ruhling
Seferino prepares the icing.

For a couple of months, he lived with his older brother.

But he did know how to work hard. First, he washed dishes. Then he delivered pizzas. He spent two years selling T-shirts, ties and socks on the sidewalks of Manhattan. 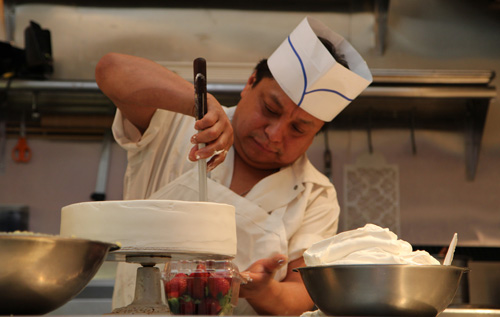 Photo by Nancy A. Ruhling
His knife is lightning quick.

He didn’t find fortune, but he did find a woman from his own country who loved him. They married, and Seferino became father to a son, and a decade later, a little girl. They scraped by. His wife cleaned office buildings.

A little more than a decade ago, Seferino took at job at Omonia Café washing the trays in its bakery. 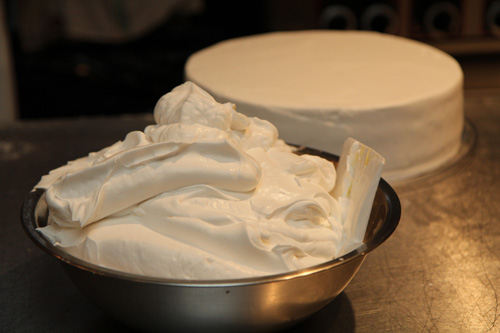 Photo by Nancy A. Ruhling
The icing that Seferino will transform into embellishment.

Everything was going well until his wife fell ill. The doctors said she had lymphoma, which is one of the few long English words Seferino has added to his limited vocabulary.

His son, who had just graduated from middle school, didn’t enroll in high school; he stayed home to take care of his mother and to translate the medical jargon for Seferino. 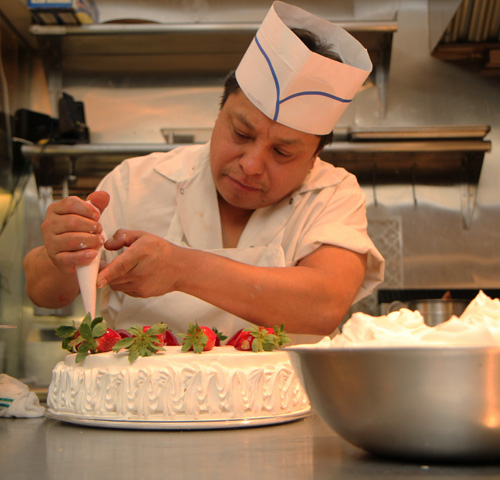 Photo by Nancy A. Ruhling
Piping with precision.

“It was a hard time,” Seferino says.

It took the lymphoma a year to fatally embrace Seferino’s wife, and when she died, Seferino took her body and his children to Mexico for two months to grieve. He got his job at Omonia Café back, but the money he was making was not nearly enough to cover the mounting medical bills. 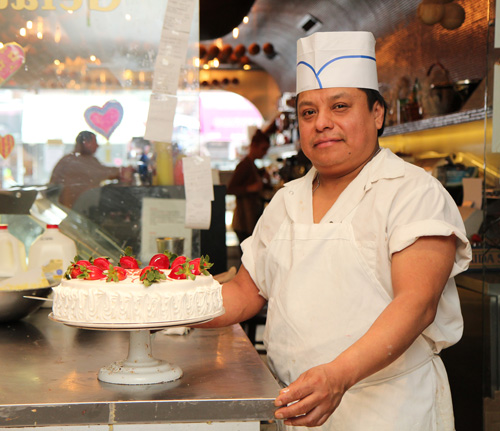 Photo by Nancy A. Ruhling
Seferino with the completed cake.

He was lonely, he was sad, and he found a little bit of comfort in the bottle.

“I used to drink after work every night,” he says. “I went to AA for almost half a year, and now I don’t drink any more because I think of my son, I think of my daughter.”

A year after the funeral, Seferino became a cake maker for Omonia Café then for Omonia Next Door when it opened in 2011.

“I learned by watching the bakers,” he says. “I like the mixing, I like everything about it.” 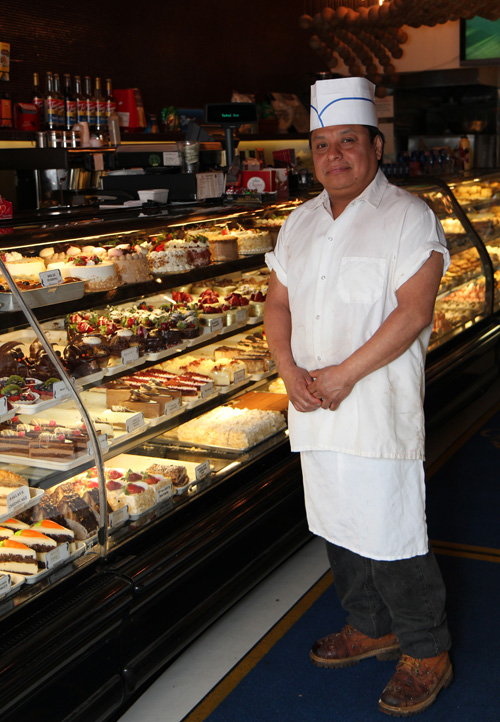 Photo by Nancy A. Ruhling
Seferino is the sweet guy behind Omonia Next Door’s sweets.

He’s proud to say that it was one of his cakes that made a star appearance in My Big Fat Greek Wedding.

Seferino makes the bakery’s cakes and cookies with a couple of helpers. He doesn’t mind coming in every day because he wants to save money for his children. He’d like his daughter to go to college.

When he does take a day off, he goes to church and spends the rest of his time cooking and cleaning and caring for his children. Although he has a few lady friends, they are only friends. 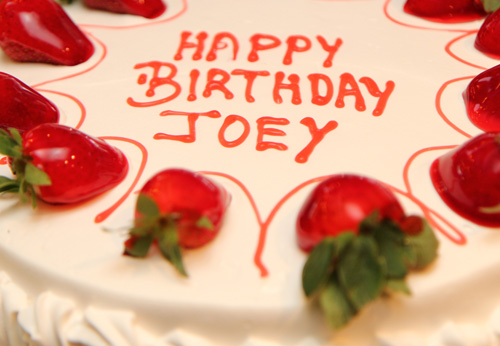 “I’m still alone with my kids,” he says, adding that six years is a long time to be without a wife. “I never found another girl.”

He shrugs his shoulders and adds the words “Happy Birthday Joey,” among the few he knows how to write in English, to the cake. He stands back to look at his work. He smiles.

Life is pretty good, it could be sweeter, but, hey, he gets to make cakes.