Seventeen thousand. Manfred Edenhofer is embarrassed to admit that that’s all the miles he has put on the 2000 ocean-grey Nissan Altima sitting serenely in his driveway.

Manfred, a bearded Teddy bear who has gasoline pumping through his veins, has made his living as a commercial truck driver. He’s logged a million or two miles on the open road.

That’s not counting the time he has spent putting pedal to pavement to make his Honda Gold Wing touring bike fly along the highways and byways. Seventeen thousand — that sorry sum puts him behind the same wheel as all those amateurs who don’t know the right way to yield the right of way. 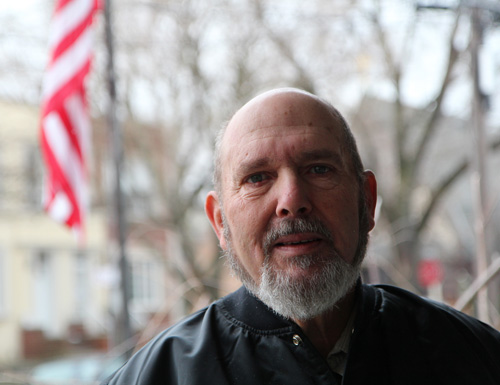 Photo by Nancy A. Ruhling
Vietnam vet Manfred made his living as a trucker.

Manfred, the muscular moniker his German-immigrant parents proudly bestowed on their only child when he was born at the old Boulevard Hospital in Astoria, is a mouthful. Some people call him Manny, but there are so many Mannys in the world and so few Manfreds that he prefers Manfred. His surname is easier on the ears when you know it means “Garden of Eden.”

Manfred’s affinity for driving may be explained by the fact that his father started teaching him to shift gears when he was 4 and gave him the keys to his grandfather’s 1937 Oldsmobile when he was 10. Manfred made his practice rides in the farm fields and newly paved parking lots of Long Island. 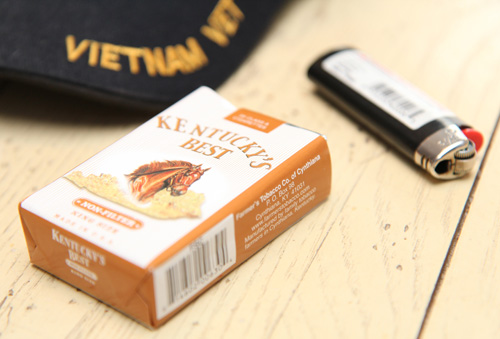 “My grandfather didn’t know we had the car,” he says. “I knew if I screwed up or put a dent in the car, I’d never be able to drive again.”

By 14, he was driving the family’s 1960 Rambler on the Long Island Expressway from Copiague to the Cross Island Parkway.

“I didn’t have a license,” he says. “My mother was in the back seat saying the rosary. When she protested to my father, he said, without so much as raising his voice, ‘He drives better than you do, so be quiet.'”

At 17, after taking driver’s education classes, Manfred got his license.

“The world was mine,” he says. 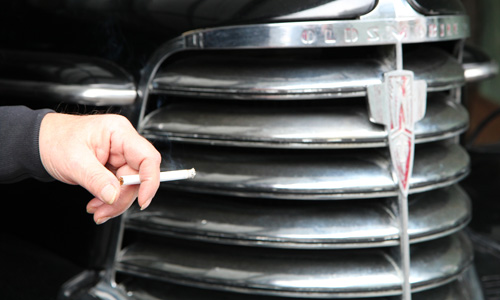 Photo by Nancy A. Ruhling
Manfred’s ’38 Olds is like the one his father drove.

That 1937 Oldsmobile — Manfred has one just like it in his garage, right next to the 1938 Oldsmobile that’s the twin of the one his father drove. A member of the East Coast Car Association, he sometimes shows them.

This is a good time to go look at them because Manfred is dying for a cigarette, and under the orders of his wife, he’s not allowed to light up in the house. By the way, the house, the only one on the block with a porch, a plastic picket fence and the Stars and Stripes waving in the wind, is the one he grew up in. Built in 1924, it has always housed three families.

Manfred’s life has pretty much followed a straight and narrow path of school and work and country, something he attributes, in large part, to his parents’ adherence to their strict German heritage. 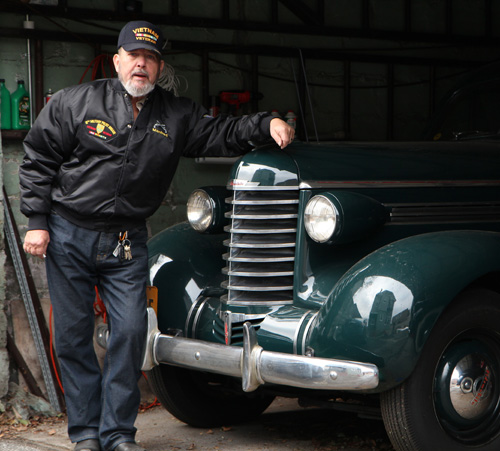 Photo by Nancy A. Ruhling
Manfred’s first drive was in a ’37 Olds like this one.

“They set me on the college course,” he says. “I had no choice. It was the time of the Vietnam War, and the government said you had to go, so I went.”

Manfred got his initial military training at Xavier, an all-boys military high school in Manhattan.

“I ended up there because the nuns at my elementary school told my mother that I’d look good in the uniform,” he says.

It was here that he fired his first shot.

“It was a rifle,” he says. “We did it in the basement. I’ve always enjoyed shooting and I’m a lifetime member of the National Rifle Association, but I’m happy I’ve never had to shoot anyone.” 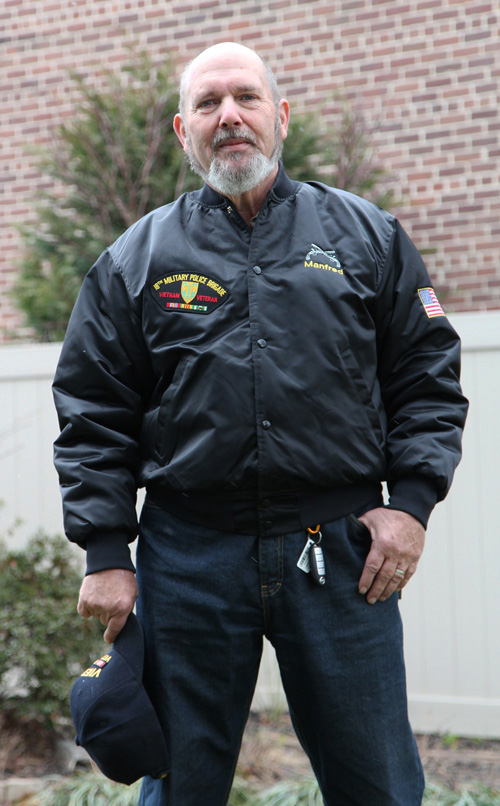 Photo by Nancy A. Ruhling
He misses being on the road.

He joined the ROTC, something he continued at Fordham University, where he earned a math degree. When he graduated, he taught high school for a year. The army sent him and his bride to Germany, where the first of his three daughters was born, before shipping him off to Cam Ranh Bay, Vietnam. He served in the military police, and it was his job to protect the harbor where PX and ammunition ships came in.

“I’m a proud Vietnam veteran,” he says, adding that he recently has begun wearing his jacket and cap to call attention to the issues affecting the soldiers he served with. “But I didn’t see combat, thank God.”

His tour of duty lasted three years, and when he returned home, he took up truck driving.

“I enjoyed teaching, but I had been away from math for too long to go back,” he says. 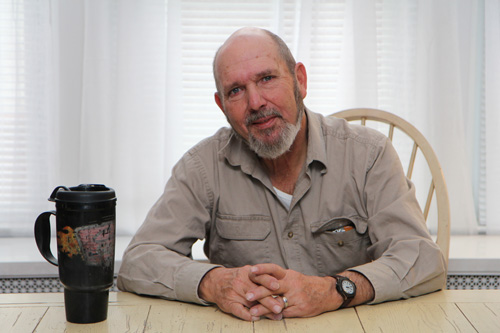 Photo by Nancy A. Ruhling
He’d rather be sitting in his truck.

The decades flew by as he and his tractor-trailer followed the white and yellow lines of his destiny, doing the Philadelphia run then the Delaware-Maryland-D.C. route. In 2000, his company was sold and subsequently closed, so he drove closer to home.

“I was never lonely when I was driving long distances — there was always a Motel 6,” he says. “I loved it because it’s a control job — you take whatever road you want, you choose your speed and where to stop. And in the old days, when I started, it was like a club — we were the good guys who stopped to fix flats and give jumps.” 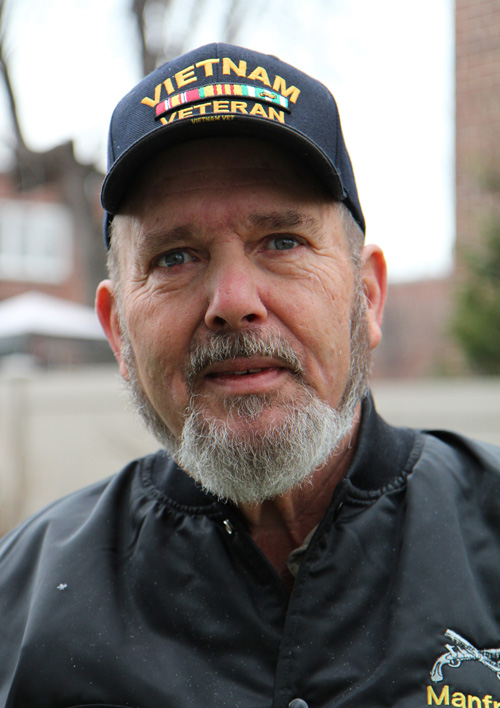 Photo by Nancy A. Ruhling
Manfred’s 2000 Nissan is calling him to the driver’s seat.

Along the ride, he got a “friendly” divorce and found another woman who became his wife.

“We met in a bagel shop,” he says. “I flirted with her and she bit, and I haven’t been able to get rid of her since.”

When Manfred turned 66 earlier this year, he turned in the keys to his truck. He doesn’t know what he’s going to do now that he’s not behind the wheel. But he’s not going to let it drive him — or his wife — crazy.

With his newfound free time, he’ll finally be able to bring the Nissan’s 17,000 up to speed.