YEAHHHHH BABY! Finally, The King of Falafel & Shawarma is in his castle.

Fares “Freddy” Zeideia — OK, you know you can’t help yourself so just call him The King — is a big guy so his YEAHHHHH BABY! is a lion’s roar. 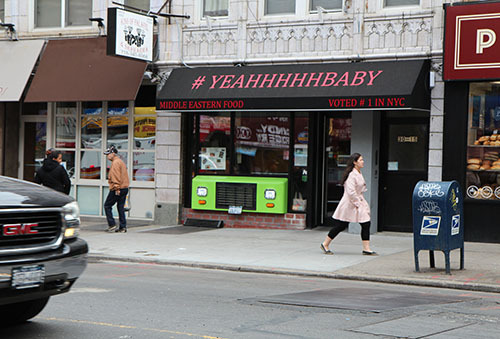 Photo by Nancy A. Ruhling
The King of Falafel & Shawarma on Broadway.

These days, The King has a lot to YEAHHHHH BABY! about because after 14 years of cooking street food out of a truck, he finally has a restaurant to call his own.

His eponymous King of Falafel & Shawarma, at the Broadway subway stop, opened in January in a former fast-food chicken joint up the block from where he parked his truck. 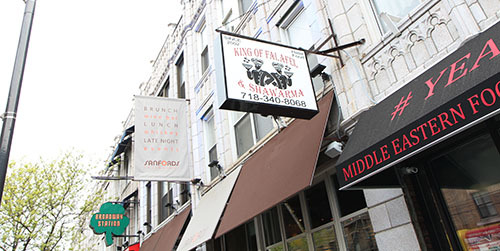 Photo by Nancy A. Ruhling
The restaurant’s right by the Broadway stop.

(In case you have the munchies, the truck’s new stop is Ditmars Boulevard at 31st Street, and there’s a cart at 53rd Street and Park Avenue in Manhattan from 11 a.m. to 3 p.m. that transfers to 30th Avenue and 33rd Street in Astoria from 4 p.m. until the customers stop coming.)

The King, who is as famous for his flashy fashions as he is for his fabulous falafel, is still trying to adjust. He’s used to squeezing his 6-foot-3, 265-pound frame into a 16-foot kitchen and working side by side, elbow to eye with his cooks.

The restaurant, the color of green and red apples, features painted murals of Manhattan and Jerusalem and an expanded menu. 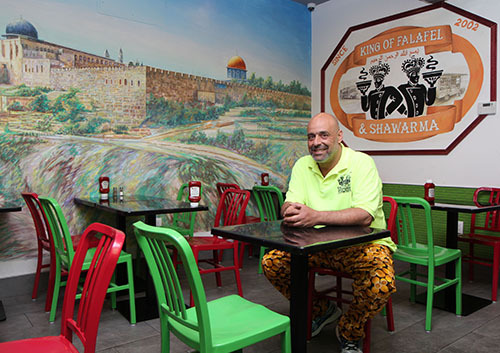 Photo by Nancy A. Ruhling
The King in his castle.

Crashing out of the front plate-glass window, there’s the spring-green fender of a food truck. Its license plate, FALAFEL1, is wrapped in a frame of shiny silver skulls.

Inside, at the counter, customers can watch as the falafel are fried.

The transition from truck to table has been tedious and traumatic for The King. Everything took more time and money than he planned. 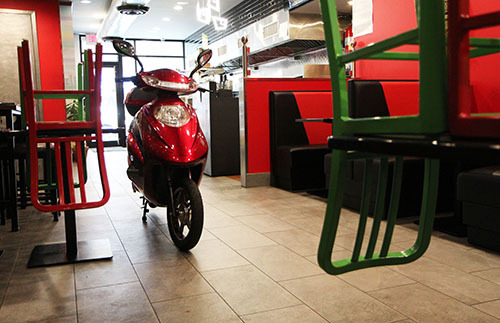 Photo by Nancy A. Ruhling
A red cycle makes deliveries.

“I was so stressed I lost 65 pounds,” he says, admitting that that’s probably a good thing but not a good way to go about it. 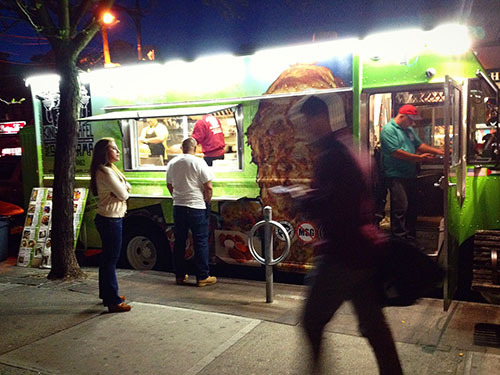 Photo by Nancy A. Ruhling
The truck on Ditmars Boulevard at 31st Street.

The move was his parents’ idea. Actually, it was more like an edict.

The oldest of six, The King grew up in Ein Yabroud, a village outside the Palestinian city of Ramallah on the West Bank. 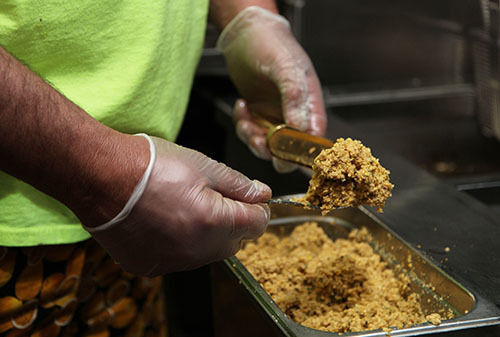 Photo by Nancy A. Ruhling
The King’s falafel is oval-shaped.

“We are Palestinians, and we left during the Six-Day War in 1967,” he says. “When we came back, we were not considered citizens and could not get Israeli IDs or Palestinian IDs. We were like people without a country, so life and making a living were hard for us.”

The King found the idea of coming to America extremely exciting. Initially, he earned $100 a week at his cousins’ pizzeria in Harlem. 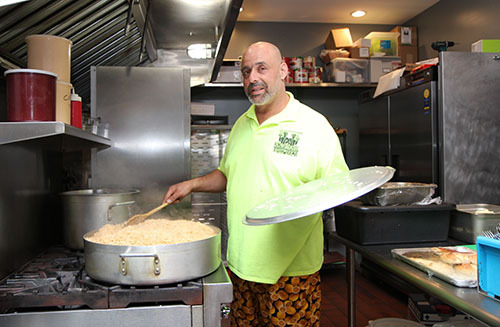 Photo by Nancy A. Ruhling
The King, in the back kitchen, stirring the rice.

“I was working seven days a week,” he says. “They fired me when I asked for a raise. Since then, I have learned not to count on anybody but myself.”

The King survived on a series of jobs. He sold linens door to door, managed a supermarket, opened a restaurant/deli for a short time that served an American menu and drove a yellow cab off and on for 17 years before setting up his fabled falafel cart in 2002. 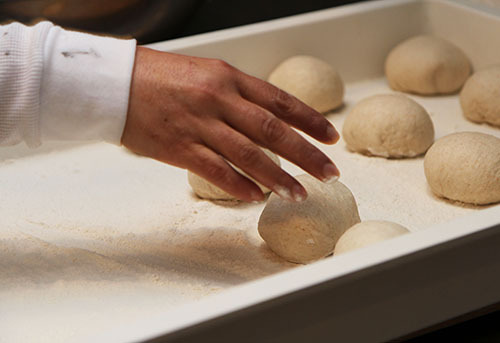 Photo by Nancy A. Ruhling
Pita bread in progress.

“I wanted to do falafel and shawarma because I couldn’t find any in Astoria that were good,” he says. “And after driving around all those years, I didn’t want to be indoors.”

From this 8-foot, open cart, The King served up his signature oval, earthy brown falafel with heaping sides of high-fives and YEAHHHHH BABYs! 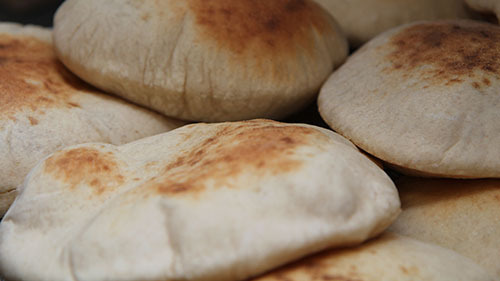 The King begins his days at 5 a.m. and seldom gets to bed before midnight. Right now, he’s stirring a giant pot of rice as the homemade pita bread is baking. 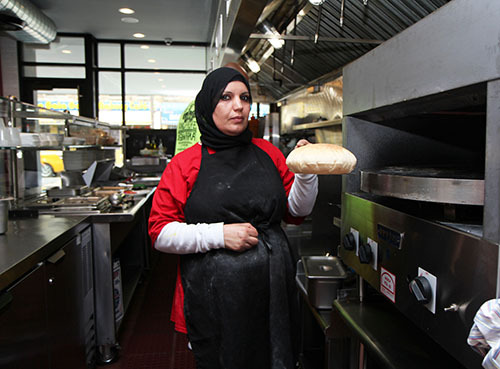 Photo by Nancy A. Ruhling
Kholood Hinnawi at the pita station.

His schedule doesn’t give him much time to spend with his wife of 30 years, three children and three grandchildren.

“The first time I went home to visit my parents, they told me I was not leaving until I got married, so I did,” he says and laughs. “I never thought to say no.”

For several years while he was driving the cab, his family lived in Palestine. 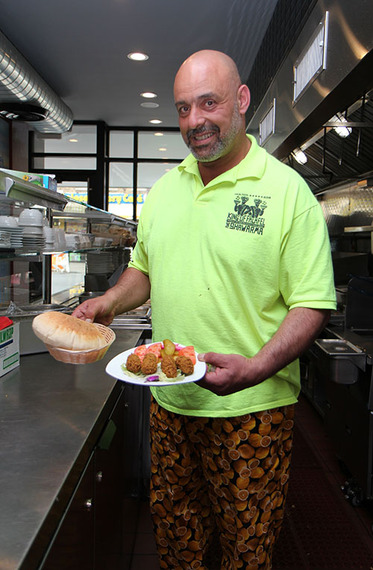 Photo by Nancy A. Ruhling
The King at your service.

“I used to work three or four months straight then go visit them for a month,” he says. “I actually saw more of them that way.”

Although The King has no intention of handing over his culinary crown any time soon, there is a Prince in training.

“My son is learning everything,” The King says. “I’m pushing him hard.” 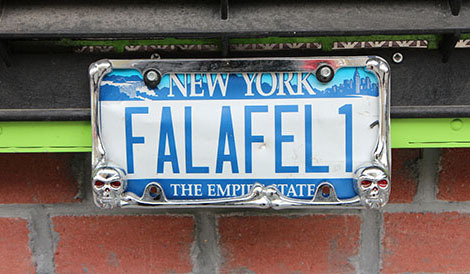 Photo by Nancy A. Ruhling
A delicious license plate.

In the meantime, The King is thinking of expanding. He’s hoping to open a King of Falafel & Shawarma in Park Slope or Brooklyn Heights.

But once he gets everything running smoothly, he’d like to climb back into the food truck.

“I miss meeting the customers,” he says. “If I’m in the kitchen here, I don’t get to see them. Even when I do, it’s just not the same.”

He drops four falafel into the hot oil.