I have a big fig tree in my back yard. When I moved in, it was nothing more than a twig, but through the years, it has grown straight and strong as an ox with no help from me.

By August, its burly branches are loaded with the purple globes that are as sweet as pure cane sugar.

Let me clarify that: I assume they are sweet for it is rare that I am allowed to taste them. Before I pick them — poof! – they vanish like rabbits in a magician’s hat. 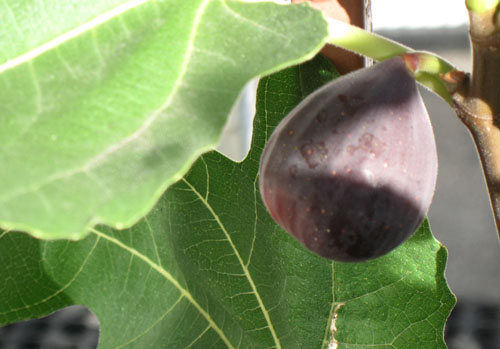 Photo by Nancy A. Ruhling
One of the few figs the Fig Thieves forgot.

At first, I thought it was the birds. I had spied a couple of black ones in its branches picking and pecking away as though they were having a summer picnic. I was more than happy to oblige them; I can always stock up at the supermarket.

Then I made a startling discovery. I was eating my fig-less corn flakes in the kitchen early one morning when I spied what I thought looked like a human hand making a nose-dive over my fence. Poised in mid-air, it plucked and scrammed like a turtle pulling into its shell.

I blinked. I looked again. I held my cereal spoon in mid-air for a full minute. Nothing happened. I made a mental note to get my eyes checked. Surely this had to have been a figment of my imagination.

As the figs ripened, I never saw the mysterious hand again. But the figs were still falling down the rabbit hole at an alarming rate. Some disappeared outright; others, bearing bite marks, were discarded like Hansel and Gretel bread crumbs along my driveway. 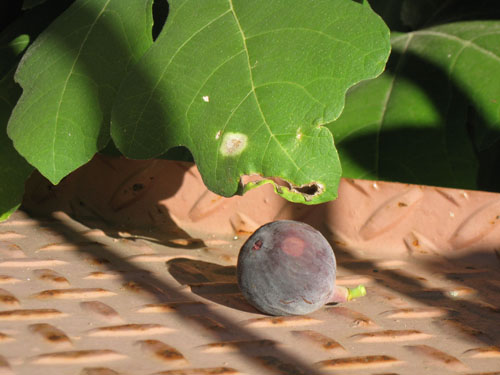 Photo by Nancy A. Ruhling
One lonely fig the Fig Thieves left behind in their haste.

Then one day, a black Mercedes drove through the alleyway and stopped at my fig tree. A man got out, took a handful and sped away before I could object. The next week, I caught a woman and two children filling their faces with my figs.

Right after they left, I heard some leaves rustling and saw the guy who owns four houses on my block using his wooden cane to cherry pick the best figs. When I opened my door to protest, he smiled and said sans regret, “You caught me!”

My stare didn’t stop him; he continued to gather my figs even though I told him that frankly, I did give a fig that he didn’t give a fig about the ownership of my figs.

Why was everyone picking my figs? I didn’t want to upset the fig cart. For all I knew this was some ancient Astoria custom: Blessed are those who pick thy neighbor’s figs.

But as the Fig Thieves continued to flee with my figs, I decided to take matters into my own empty hands. 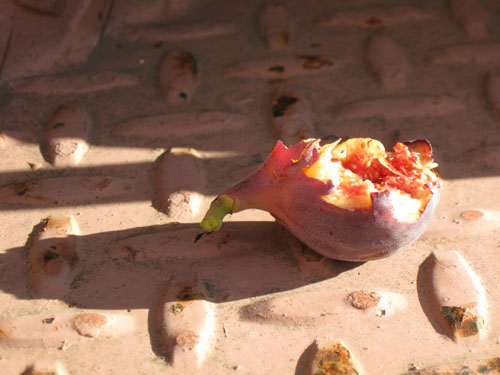 Photo by Nancy A. Ruhling
The Fig Thieves may have gotten the last bite, but I got the last laugh.

I got up before the birds and camped out under the fig tree. Within minutes, the door of the house next door swung open and a hand holding a white plastic bag hovered in the air.

It was the old Hispanic lady who lives next door, the one who pretends she can’t speak or understand English.

“Hola! ¿Como está usted?” I shouted with a smile as I jumped out of my hiding place.

Startled, the senior señora stopped in her tracks. She smiled back and surrendered her bag of purloined purples.

“I picked them for you,” she said in letter-perfect English.

“Thanks,” I said as I bit victoriously into my summer’s first fig.