There’s a guitar right in the middle of the living room floor. On the bookcase, there’s a mannequin’s head marked up with acupuncture points whose colored lines make it look like a subway map.

And in the art studio, visible through the glass-knobbed French doors, there’s an unfinished oil painting of bright yellow flowers in a vase.

The lights are low. The sweet scent of incense fills the air with Zen serenity.

“Let me sing for you,” says Kenny Lockwood. 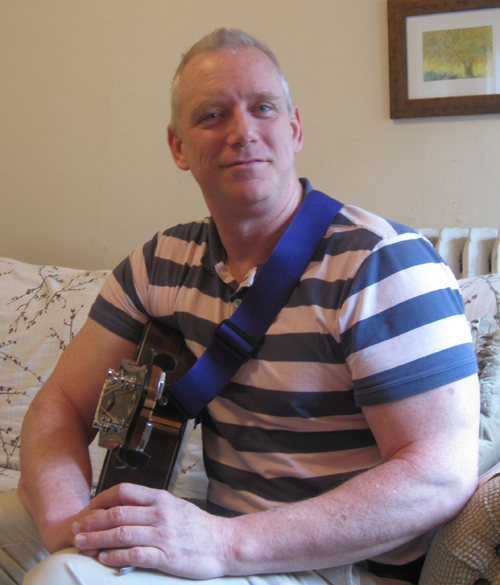 Photo by Nancy A. Ruhling
Kenny always has a guitar in his hand and a song in his heart.

He picks up his handmade James A. Olson acoustic guitar — he has named it Solomon after the wise biblical king — and brings forth “With These Hands,” one of his latest folk compositions, in a calm, clear, bell of a voice:

He stops these real hands from strumming, and a stillness that transcends silence fills the air.

“When I’m sitting with my guitar, it’s like I’m sitting on the edge of creation, and I’m able to give of myself,” he says. “It’s so much bigger than me.”

Giving of himself is no small thing. Kenny is a painter, sculptor, musician, composer, actor, writer, poet, performer, acupuncturist and probably a dozen other things he’s forgotten to mention.

“None of my disciplines — the many creative gifts I have — has never synthesized as they did when I became an acupuncturist this year,” says Kenny, a muscular man with high-voltage sky-blue eyes. “I’ve been working my whole life to do this. Art and medicine are inextricable to culture, to health and to the fulfillment of life.”

Kenny has been drawn to the arts even since he was boy growing up in Bellport, Long Island. “I saw my older brother copying comics at the kitchen table, and I knew that I could do it better,” he says. “I was four. In that moment, I knew I could draw, and I never stopped.” 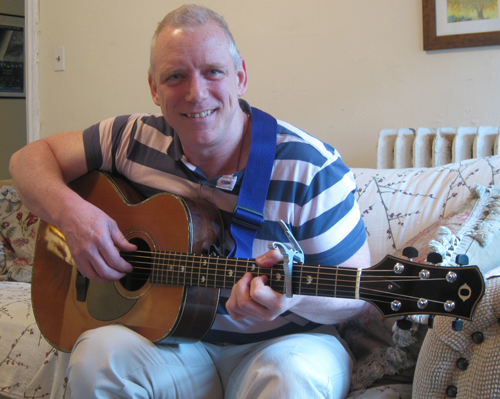 Photo by Nancy A. Ruhling
Kenny’s composition, “With These Hands,” is his mantra.

By high school, he also had discovered music and theater and made up his mind to become a world-famous illustrator or animator.

“At this time, the guys who designed album covers were like rock stars,” he says, adding that by graduation he had mastered draftsmanship. “I loved drawing because it allowed me to make contact with the form and essence of the thing I was drawn to.”

Kenny had five siblings and parents who were not well off, so he had to make his own dream come true. He earned an associate’s degree in commercial art from SUNY Farmingdale. He attended the School of Visual Arts in Manhattan for only one semester before running out of money. A year later, after working full-time in a clothing store, he went to SUNY Purchase, where he graduated with a bachelor’s degree in visual arts.

He then embarked on what would become a lifelong journey, working a series of jobs in New York and Los Angeles that included installing stereo systems in cars, doing graphic art for ABC Channel 7’s Eyewitness News and PBS’ MacNeil/Lehrer Report, working as an illustrator, painting houses and murals and playing guitar in coffee houses.

“I finally decided to take one of my creative gifts and turn it into a livelihood,” he says. “So I put music and acting on the shelf and focused on oil painting.”

He headed to Martha’s Vineyard, where he spent nine months working 40 hours per week painting so he would have enough work to hold a show in one of the more prestigious galleries. 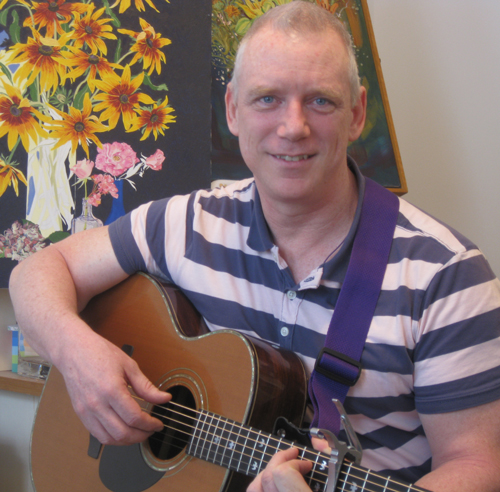 Photo by Nancy A. Ruhling
Whether it’s art or acupuncture, Kenny brings it his healing feeling.

“I was not ready to become a full-time painter,” he says. “I wanted to do other things, too, so I turned to music.”

“I haven’t made a living, per se, with any of my talents,” he says. “I have sold paintings, some for as much as $7,000, but not consistently. I’ve always tried to honor the gifts I’ve been given, and in doing so, I haven’t built a life of material possessions.”

In his quest to put his talents to their best use, Kenny opened himself up to new fields of expression. He searched for something, he didn’t know what, that would change his life.

“I knew I always was going to be creating art,” he says. “And I also wanted to do something that would be of service, something that would fascinate and challenge me and provide a decent living to any age I wanted to take it to. I started a soul search for my calling. I meditated, I spoke with friends, I researched careers and went back to my childhood to find things I was innocently drawn to. And I prayed deeply. And one day — after six years — the light came on: acupuncture.”

After three years of study at the Swedish Institute‘s College of Health Sciences, he earned a B.P.S./M.S. in acupuncture under the 88th-generation Jade Purity Foundation’s renowned Daoist teacher/priest Jeffrey C. Yuen and this year set up his private practice, Ancient Form Acupuncture, in Manhattan.

He points to the framed certificate on the wall and the two hand-painted characters framed right next to it.

“The characters represent distance and king, and when Dr. Yuen gave them to me, he told me that I was someone who is a king of my own destiny. He said, ‘You don’t stop, whatever the distance, you see your way through to seeing your destiny.'”

When Kenny does acupuncture, the healing is finished before the first needle even breaks the skin. “I’m watching people’s lives transformed,” he says. “It’s not my doing, I’m only a vessel, but it’s an honor.” 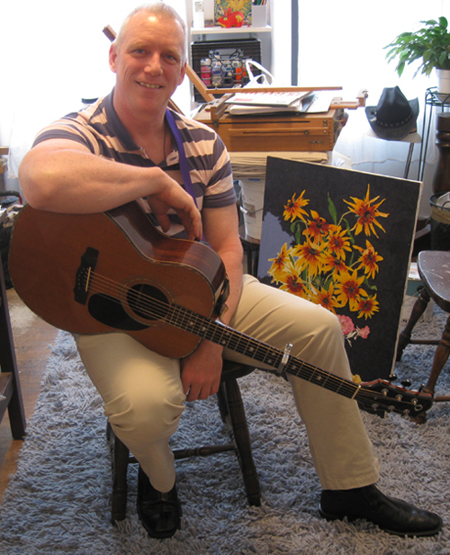 Photo by Nancy A. Ruhling
For Kenny, the journey is just beginning.

Acupuncture has served to heighten Kenny’s other talents. In any given week, he paints, writes, plays music and tends to his patients. He does yoga, meditates and lifts weights. It’s all part of his brain/body balancing act. Recently, he dipped his brush into watercolors; he loves their spontaneity. And he’s been making his own kiefer.

“A lot of times in my life I have felt lost,” he says. “But my nature has never been lost. My nature has carried me like a boat. My nature is my essence, my heart as opposed to my mind.”

With his hands — the ones that play music, make art and heal — Kenny lovingly slides Solomon back into its case and arranges his needles in his brown leather doctor’s bag. He has a session with a patient this afternoon.

“Let me give you a hug,” he says in parting.