That’s what we’ve all been asking since spring, when Harry Fiegelson didn’t show up on his usual corner at 31st and Ditmars to sell us his used books and to show us that everything was right with the world.

At first, when he didn’t pop out with the crocuses, I wasn’t concerned. Perhaps he was waiting until the weather was warmer. But when his spot was taken over by an interloper selling fruits and vegetables, a thousand alarm bells went off. 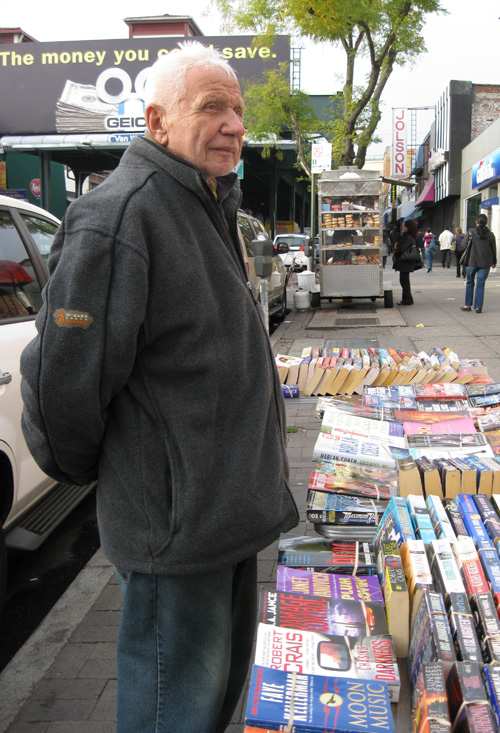 Photo by Nancy A. Ruhling
Harry made 31st and Ditmars his corner and our lives more interesting.

I knew Harry wouldn’t desert us, not for anything or anyone. I waited a decent amount of time and called his apartment. I feared the worst and didn’t want to hear bad news.

The phone didn’t ring. It wasn’t disconnected; all it did was click.

In the following months, I had heard a rumor that Harry had had a stroke, but I couldn’t confirm anything. I had all but given up hope when two weeks ago my phone rang.

The caller thought she had dialed a nursing home in Astoria. I was about to hang up when she asked me whether my name was Nancy. When I said yes, she told me she had found my number in her uncle’s wallet. Immediately, I knew she was talking about Harry.

The caller was Diane Giovanniello, Harry’s niece, the one he had told me lived in Florida.
In March, Harry had become ill, so ill, in fact, that he couldn’t summon help. Apparently, he suffered for days until his sister in Manhattan called, and he, by some miracle, was able to answer the phone. The firefighters across the street from his apartment were called to get him to the hospital, and he had emergency surgery on his stomach. 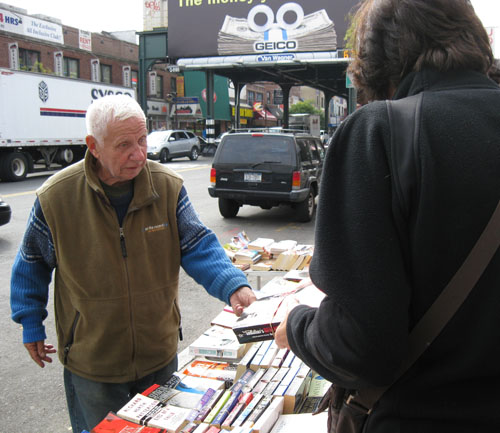 Photo by Nancy A. Ruhling
Harry sold more than books: His kind words gave us hope.

“We thought we were going to lose him,” a sobbing Diane tells me.

After that, Harry spent two months in a rehab center in Astoria. In June, when he was well enough to travel, Diane and her family moved him to their home in Florida.

“He could barely walk,” Diane says. “I didn’t want him to be in a nursing home. He’s always been there for me my whole life, even when I was a little girl. He took care of everybody in the family. Now, it’s his turn to be taken care of.”

Harry, I’m glad to report, is making a marvelous recovery. He’s getting stronger every day. Diane bought him a kitten, which he named Rosie after his mother. 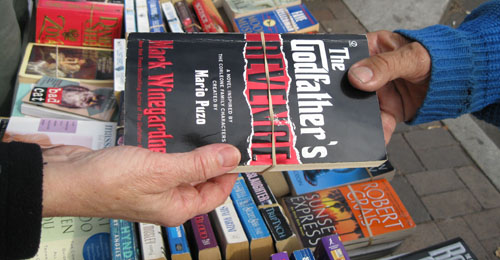 Photo by Nancy A. Ruhling
Harry used his used books to brighten our days.

“Harry took care of his mother all his life,” Diane says. “He lived with her until right before she died.”

Harry spends his time soaking up the sunshine, reading a little of this and that. “I feel fine,” he says. “I’m well. I love being with my niece; she takes good care of me. But I miss the people in Astoria. I made a lot of friends there.”

Harry would love to hear from you; send your best wishes to him at:

Although Harry still needs some assistance when he walks, he’s looking forward to dancing again. “I could dance if I want to,” he insists. “If I got up on the dance floor, I could do it.”

Back in the day, Harry’s hoofing was the talk of the town. “He jitterbugs,” Diane says. “When he was a teenager, he used to tap dance and dance on tables. Up until he got sick, everybody went crazy when he danced.”

Harry turned 83 on July 22, and Diane and her family — husband Angelo and sons Angelo Jr. and Randy — cherish their time with him. “We have him telling us all his stories, and we’re making videotapes,” Diane says.

The important thing is that Harry is safe, happy and getting healthy again. 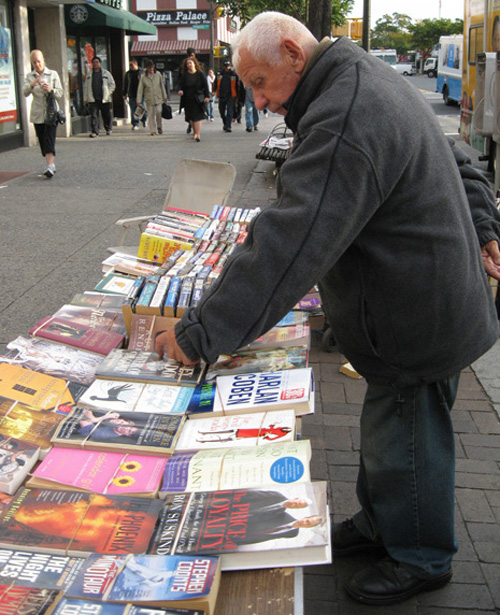 Photo by Nancy A. Ruhling
Harry, although you’re not on the corner, we’ve saved a spot in our hearts for you.

“I’ve been trying to get him to live with me since I moved here seven years ago,” Diane says. “I was even trying to sell my home so I could move back to New York to be with him. My Uncle Harry, he’s one in a million. He has a heart of gold. Now, we’re making up for lost time.”

Harry, we miss you. It doesn’t matter who else is standing in your space, it will always be your corner.