I saw it under the light of the streetlamp outside my house. Something — or someone — was staring at me.

As I walked to the front gate, I realized that it wasn’t one face but four that were peering out at me.

One was smiling, one was frowning, one was mouthing off, and one was gleefully sticking out its tongue.

Like many of the houses in my neighborhood, mine has a wall out front. When I moved in, the wall was falling down, raining bricks on the sidewalk as people passed by.

I tore it down and put up a stronger wall, one that was, at least to my mind, a work of art. It is red brick with four red-brick pedestals, each of which is crowned by a white concrete Colonial Revival ball that makes a glorious reference to the historic style of the Roaring Twenties row house. 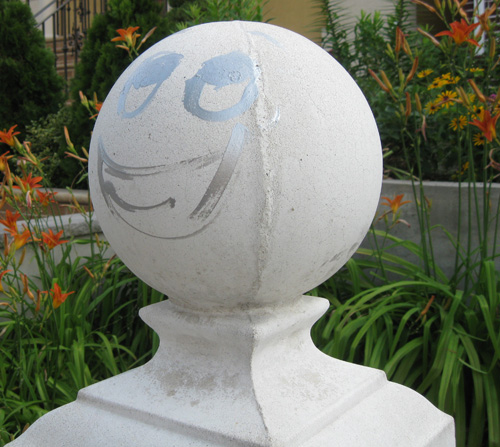 Photo by Nancy A. Ruhling
Smiley

It was this quartet of billiard balls that served as the blank canvas for some budding Banksy.

And here’s the rub: this was not the work of an amateur artiste. This was no spray-and-run job. No, the shiny silver paint was applied with delicate, nuanced brush strokes, and the simple design, a take on the iconic Smiley Face of the 1960s, was a mashup of Warhol and Murakami.

There was no signature, not even a tag, so I couldn’t commend the creator — or beat the silver shit out of him.

This was not the first time my wall had been the scene of destruction. No sooner were the Colonial Revival balls set in wet cement than some neighborhood kid with Superman strength toppled them to the ground. When I patched them up and put them back up, the kid did it again.

I guess a smarter person would have taken the hint, but I didn’t, and after I stood guard over them for a day, the balls finally stuck. 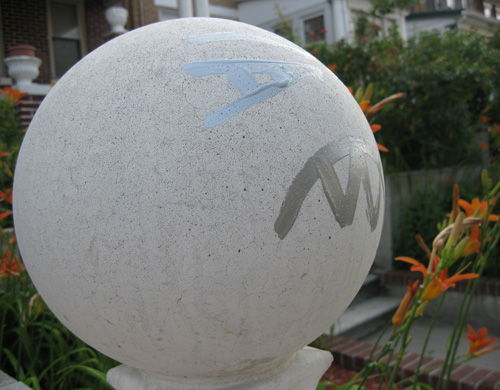 Photo by Nancy A. Ruhling
Frowny

No sooner were they permanently installed than someone with a black Sharpie and no artistic talent doodled all over them. And last winter, during the blizzard, someone topped them with snowballs and transformed them into jolly snowmen that made me smile through all the shoveling.

Now, I got really proud of this wall, seeing that it is between two houses guarded by silver chain-link fences that look as though they escaped from Sing Sing in the 1930s.

But not everyone, it seems, has my fine eye for art. As time went on, the wall did become quite a neighborhood attraction but in a way I never imagined.

An old woman with wild grey hair, weary eyes and cracked leather shoes took to sitting on it every day as if it were her private park bench. And the kids from the private high school started using it as a bar counter, planting their half-drunk Coke cans and Starbucks cups there. Once, a father lifted his toddler onto the wall so she could pick my day lilies.

So when I saw the silver faces, I smiled, then I frowned, then I mouthed off, then I stuck out my tongue. 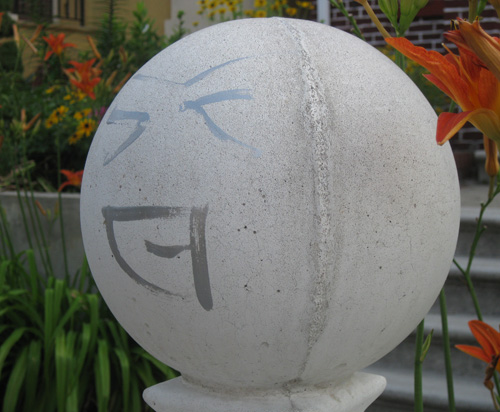 Photo by Nancy A. Ruhling
Mouthy

And I was going to leave them — who was I to dare erase such high art on such a low wall? — mainly because I never thought the paint would come off.

But I made a trip to the paint store anyway. The wise guys behind the counter snickered and shook their heads when I told them about Smiley, Frowny, Mouthy and Tonguey.

Like much in life, they couldn’t guarantee me anything. What they could tell me was that I needed a spray can of heavy-duty graffiti remover, a stiff wire brush, a cotton face mask and $16.14.

Thus armed, I suited up in ripped jeans and torn turtleneck and made my way to the wall at the crack of dawn. To my store-bought equipment, I added a bucket of water and a wet rag.

As I sprayed each face, I started to cry. It was a shame to erase such lovely art. And the hazardous fumes got into my eyes. 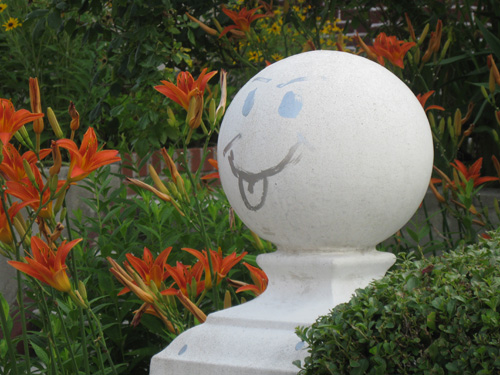 Photo by Nancy A. Ruhling
Tonguey

Using the wet rag, I peeled away the paint, pummeling the stubborn spots with the wire brush, as neighbors on the way to the subway stopped to tell me how lucky I was to have attracted such a creative vandal.

When I was finished, I stood back to admire my handiwork. I felt pretty smug. In less than an hour, I had defaced the defacement.