“I can sum up my life in one sentence,” declares Maki Hirose. “I’m a young, straight, very available guy.”

“Very” is the key word, he emphasizes.

Maki’s a photographer, and he’s shy when he’s not behind the shutter, so his straightforward, single-minded Match.com-like description leaves out a lot of things that need to be included for the sake of total accuracy and complete honesty.

Let’s start our Maki snapshot with sweet and funny and add sensitive, kick-ass smart and absolutely adorable, and we get closer to the mark. Oh, yeah, and really, really cute, with a killer British accent. 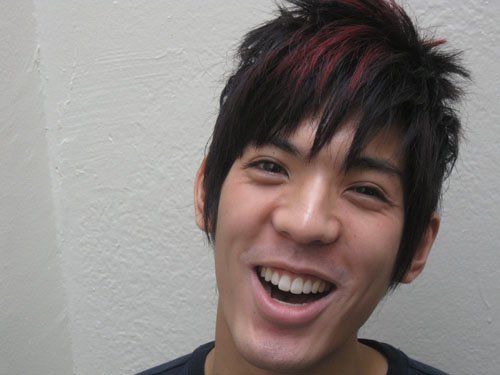 Maki is full of promise. He just turned 26, but he looks 16 — young enough to be carded at the bars where he orders vodka. He’s so proper that he eats French fries with a fork and cuts melted cheese sandwiches into bite-sized pieces.

He’s had girlfriends, to be sure, but he hasn’t had that one special relationship. “I used to want something serious,” he says, “but nowadays, I’m open to suggestion. I’m young; I don’t want to commit to a five-year plan yet.”

Maki, whose spiked black and cherry-red hair gives him the look of an androgynous
manga superhero, is a fusion of Asian/Anglo roots. An only child, he was born and reared in London; his parents are natives of Japan, and he speaks Japanese fluently.

He’s been taking life pretty seriously ever since he was seven. His parents wanted him to go to a top all-boys day school, so he spent a year studying intensively to get in. 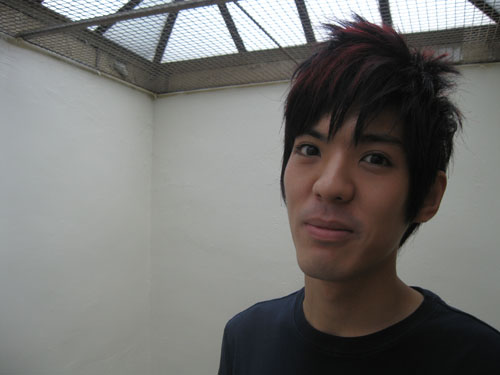 Photo by Nancy A. Ruhling
Maki strikes a pose.

“The school was tough and painful,” he says, adding that he was a straight-A student. “I had to wear a uniform with a school tie and keep my shirt tucked in. We all studied really, really hard; it was like being in a factory.”

When he was 13, thank heaven, he discovered punk, heavy metal and industrial rock. “I played guitar in a few bands,” he says. “Every week, my friends and I went to shows, and I’m still a huge, huge fan of awesome head-banging rock ‘n’ roll music. This shaped my teenage years.”

Maki’s new interest spawned a new look, which didn’t go over well at his stiff-upper-lip school.

“I spiked my hair then dyed it dark blue,” he says, adding that the color led to the threat of suspension. To appease the masters, he dyed it claret red. “The classrooms were pretty dark, so the teachers didn’t notice it,” he says.

His parents went to the University of Chicago — it’s a long story; they were married in its chapel — and Maki decided that he wanted to continue the family’s American education tradition. After a whirlwind coast-to-coast tour of schools, he settled on New York University’s Tisch School of the Arts. 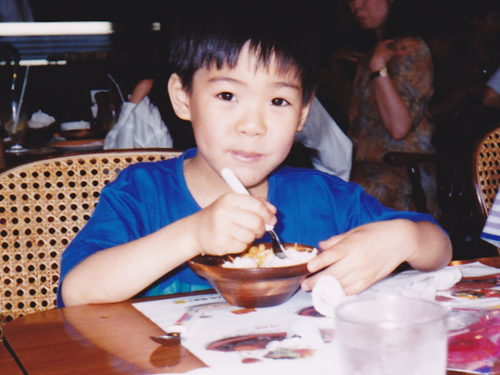 Maki when he was five.

“I wanted more than a good education,” he says. “I wanted to meet people who would become friends for a long time. I wanted to have four interesting years.”

And that’s what he got. He wasn’t sure what he wanted to major in, but he ended up taking some photography courses.

“I didn’t even own a camera,” Maki says. “I struggled that first year with black and white and color film. I was so burned out that I figured I’d never do photography again, but I knew I wanted to do something with images.”

He tried video but didn’t take to it. When he took a course in digital photography, it clicked. First he shot landscapes, then he segued into portraits. 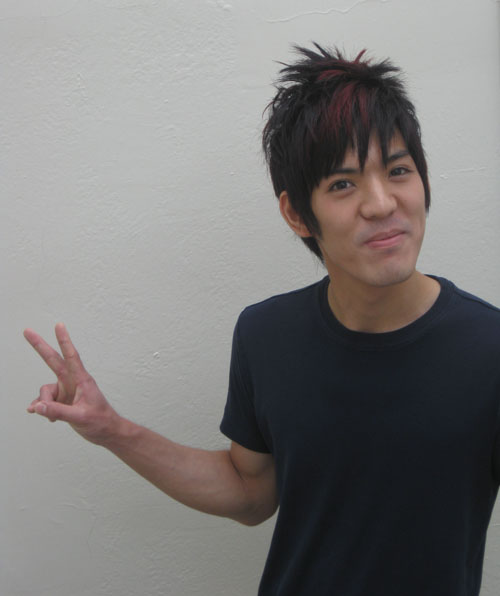 “After I photographed a friend’s sister,” he says, “I was hooked.”

When he graduated, he landed a full-time job as a digital imaging specialist for a large photo studio in Manhattan. In between shoots, he takes portraits for his portfolio; he wants to be a commercial photographer.

“I take pictures of people because I can’t explain them in words,” he says. “Taking photos is like listening to a favorite piece of music and discovering something new in it each time.”

Maki likes to capture the brighter side of life. “Getting people to smile is really tricky, especially if you have a camera,” he says. “I don’t have a set formula for making people comfortable. I try to be myself. Sometimes I crack a joke.” 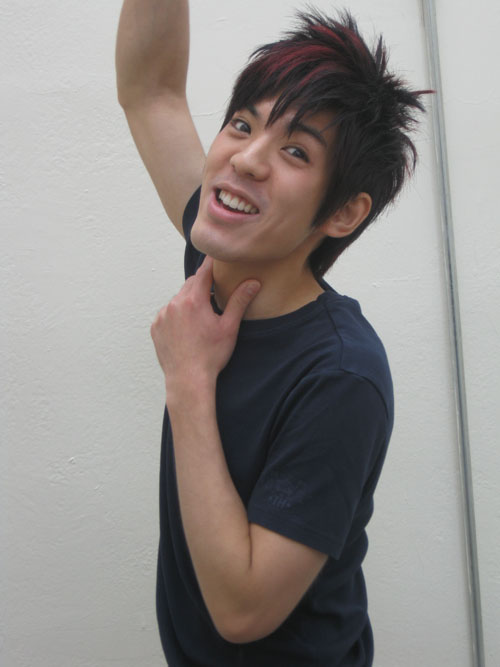 What do you get when a snowman sleeps with a vampire?

When he told this one to his yoga class — he was in crow pose — his fellow students didn’t groan. They ohmed.

“I don’t take credit for originating the jokes,” he says, adding that this joking business is new for him. “I’m surprised, I’m shocked that people think I’m funny.” 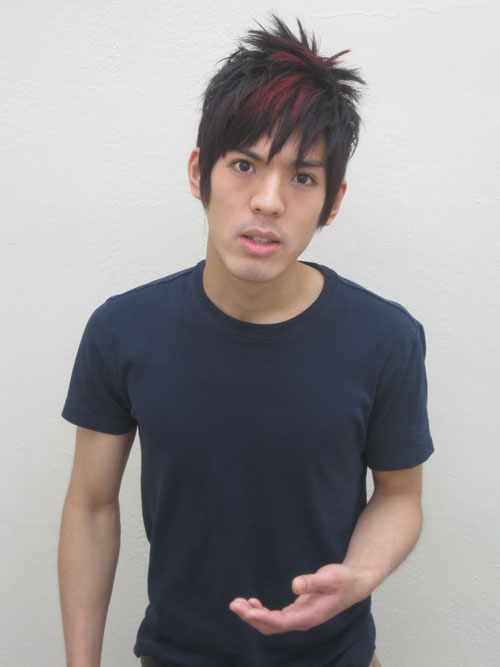 Getting Maki to do a crow pose is a lot easier than getting him to sit comfortably for his own portrait.

“I’m always on the other side of the camera,” he says. “I’m not really photogenic.”

Sometimes the studio shoots Maki works on run 10 hours straight. So he goes to the yoga classes to unwind. He’s a movie buff — “I’ll watch almost anything except romance. I’m a guy, so the action superhero nerdy stuff is awesome” — and his idea of a good time is hanging out with his friends.

“I’m into things like super action heroes and Japanese manga comics, especially the wide-eyed expressions of the characters and the ink marks that convey movement in the scene,” he says. “These are qualities I try to capture in my photographs.” 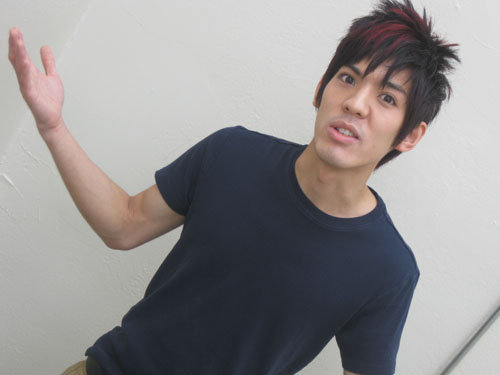 A self-described “microwave wizard,” Maki eats in as much as out. He shows off a plastic pasta cooker. The container shows how much spaghetti to put in for one serving and for two. Alas, Maki’s only made single servings. For the sauce, he follows his mum’s recipe.

His mum. The last time she and Maki’s father visited, she found fault with his housekeeping. Can you believe that? His apartment is spotless, and everything is in its place as if waiting for a military inspection.

Maki may not have everything figured out, but he doesn’t believe in absolutes. The perfect girlfriend he’s waiting for? There is no such thing in his lens or in his future. 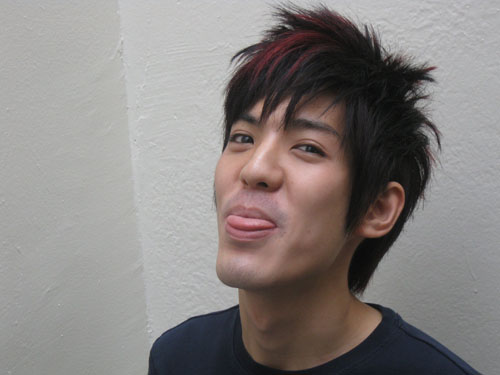 “Perfection is unattainable,” he says. “What kind of a woman am I looking for? I have no idea. Perhaps someone who can equally hang loose.”

Maki, who summed up his life so succinctly in the beginning, says that he has a lot more to say. “What do you want to know? I can keep telling and telling things,” he says. “When someone says there’s nothing more to tell, they’re either lying or joking.”

So he starts in again… Why did the man cross the road?