He doesn’t mean it to be funny, but it is.

He pulls off his white plastic rock-climbing helmet, the one that makes his head look like Humpty Dumpty, and straps it to the handlebars of his bicycle.

Clark is long and lean like a telephone line, so he’s not an easy fit for this tyke of a bike that’s the color of a ripe Georgia peach. 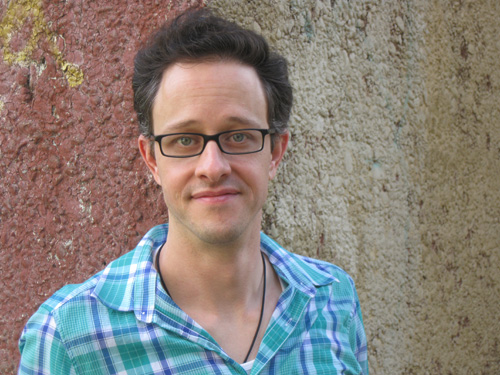 Photo by Nancy A. Ruhling
Clark always goes for the guffaws.

Actually, it’s mango. Clark knows that because he’s its first and only owner. He’s had the one-speed Redline Freestyle for 22 years, ever since he was 12.

Clark, who is wearing a turquoise-plaid button-down shirt that matches his eyes, doesn’t always ride his bike. Usually, he takes the subway, but it’s the weekend, time for the N and Q trains to run as slow as Vermont maple syrup. He used to have a car, but the 10-year-old Honda Civic wasn’t as colorful as his wonder wheels, so after its license plates were stolen, he drove it back to his parents’ house in Colorado and parked it there permanently.

Today, he didn’t want to be late, so he got his size 9 navy blue Converse sneakers to push the size 3 pedals of this Lilliputian locomotive, and here he is, right on time. To get a laugh. 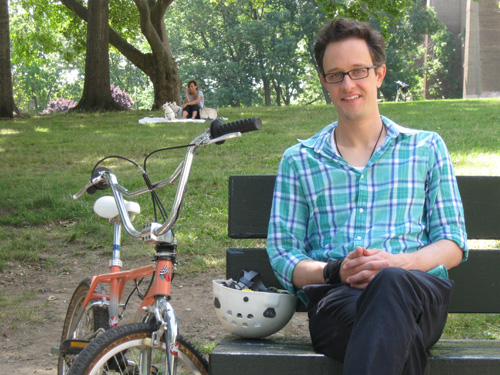 Photo by Nancy A. Ruhling
Clark and his mango Redline Freestyle, comic not chic.

Mind you, Clark isn’t going for a laugh, but he gets one anyway. It’s always this way.

“My last name’s Gookin, and I have an incredibly high forehead,” he deadpans.

When Clark really wants to be funny, he doesn’t have to say anything or do anything. All he has to do is be himself, and everybody cracks up like eggs in an omelet.

The lift of his eyebrows, the popping out of his blue-green eyes, the tilt of his head, the innocence of his high-pitched voice or the riding of his bike, that’s all it takes. 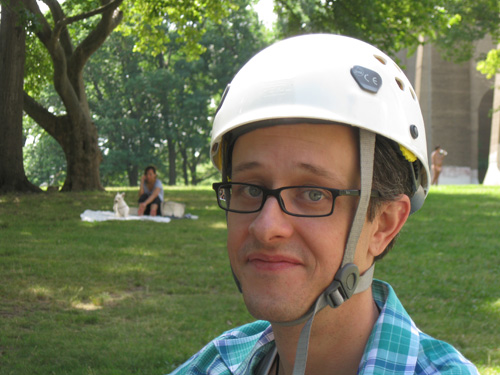 Photo by Nancy A. Ruhling
How can you not laugh at this?

Clark, who grew up in Colorado, started acting up when he was an eighth-grader. “I was playing on the school football team, but when I broke my femur, that career was over,” he says. “Since I couldn’t do PE, they put me in theater, the only other class available at that time.”

He was a sucker for the sound of applause, and by 17, he had decided that an actor he would be.
After graduating from the University of Evansville in Indiana, he earned a master of fine arts degree from Rutgers University. An agent persuaded him to move to Los Angeles.

“I did lots of auditions for commercials, but I didn’t get any work,” he says.

So after a year, he moved to the East Coast, coming to Astoria two years ago after his fiancée decided to say, “I don’t.” 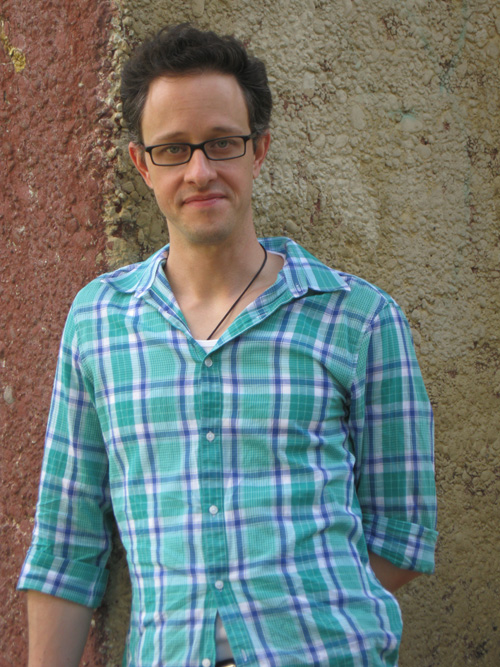 Photo by Nancy A. Ruhling
Clark does serious.

Now, he’s making the rent by being a night-time cater waiter, but he’s also done a number of odd jobs, including rehabbing houses. “I’m a jerk of all trades,” he says.

He’s done work in theater, commercials and film. He spends his days auditioning.

“I prefer comedy because of the immediate gratification,” he says. “You get a laugh — or you find out you screwed up. There’s often comedy in drama, but it’s lost. I’m good at drama, but I’m built for comedy. I’m tall and skinny, my hair has never cooperated. I have the physicality for comedy.”

Clark, who looks as though he could be Stan Laurel’s great-grandson, isn’t searching for celebrity. “I want to make my living as a performer,” he declares. “I don’t want to be famous or win awards.” 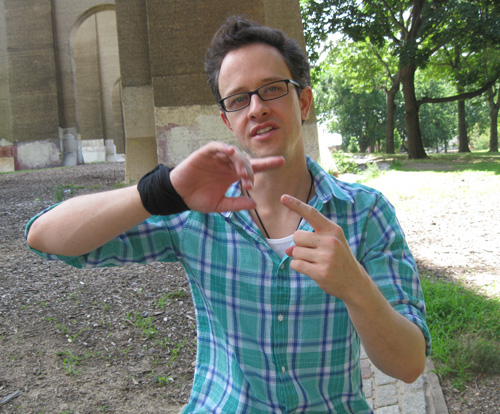 Photo by Nancy A. Ruhling
The world according to Clark.

Despite all the headshots he’s posed for, Clark is shy about having his photo taken. This is no joke. “You’re going to want pictures of me in the helmet, aren’t you?” he asks. “Please, no, not the helmet. I know you think it’ll be funny but …”

He puts on the helmet and a preposterous pout. “My humor is self-aware,” he says. “You have to be able to make fun of yourself.”

Clark certainly is willing to do that. His standup routines dissect his life. “If you’re not funny, you have no one to blame but yourself,” he says.

Which is why it didn’t take much arm twisting to make him put on the helmet. 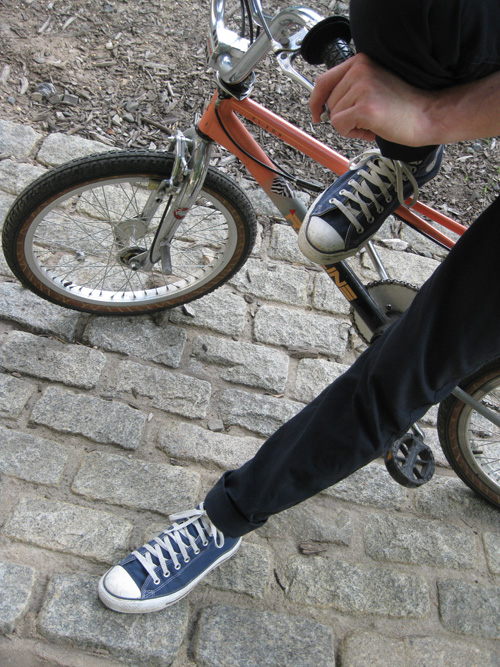 Photo by Nancy A. Ruhling
Clark’s big shoes have little pedals to fill.

“Can I take it off now?” he pleads with puppy eyes.

Let’s get back to some serious stuff.

“I love doing standup because I have control of what I do and don’t do,” he says. 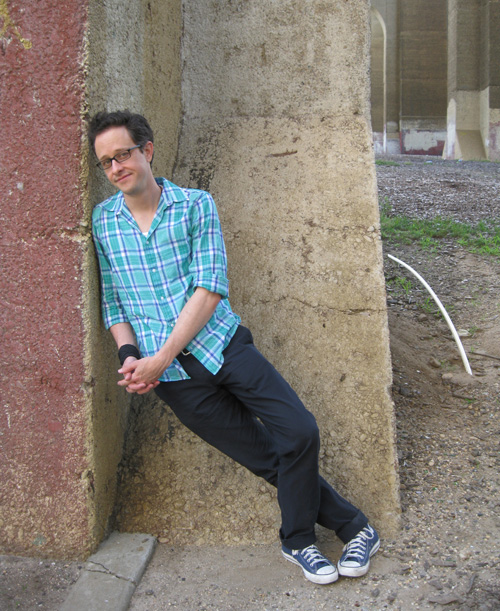 Photo by Nancy A. Ruhling
Clark holds a pose — and holds up a wall.

If Clark, whose black curls have slivers of silver, doesn’t make it big, he doesn’t know what he’ll do. He has considered teaching acting, but every time he thinks he’s going to call it quits, he gets a callback.

“I’m a slow burn,” he says. “I’m not going to walk into a room and dazzle you. When casting directors see me, I hope they think, ‘He’s great, he’s not right for this, but he will be.'”

And when the weight of rejection gets him down, Clark’s sense of humor lifts his spirits. 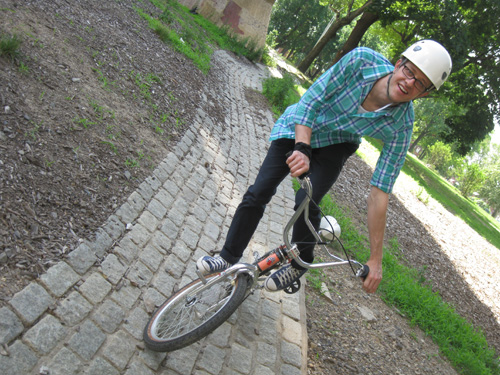 Photo by Nancy A. Ruhling
Clark and his crash helmet careen off into the city sunset.

Clark straps on his helmet and jumps on his bike. Oh, dear, there’s a lot of traffic out. He hopes he doesn’t crash; the strength of his hard-plastic hat hasn’t been tested.

He pedals down the boulevard, a tall man balancing on a child’s bike. There’s a notebook full of jokes in the bright purple knapsack he wears on his back like armor.