He draws lines for a living, and this routine, sometimes with a pad and pencil, other times on a computer tablet, helps his brain get in the right frame of mind for the day’s designs. 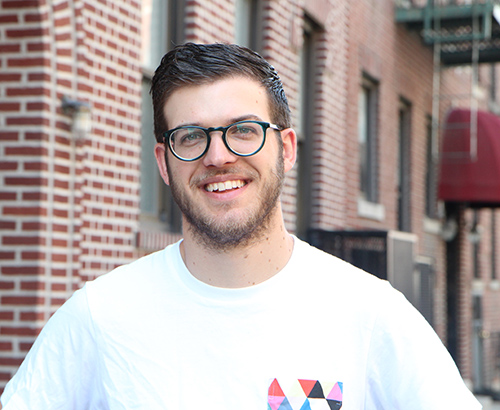 Zach has been drawing for nearly a quarter century.

He creates his cute kid-centric cartoon characters in his apartment.

He doesn’t have a dedicated space – he likes to roam from room to room. There is a compact computer desk in the living room and a tiny table in the kitchen where he keeps a plastic bag of crayons.

Zach doesn’t have to tell you that he’s one happy, lucky guy. 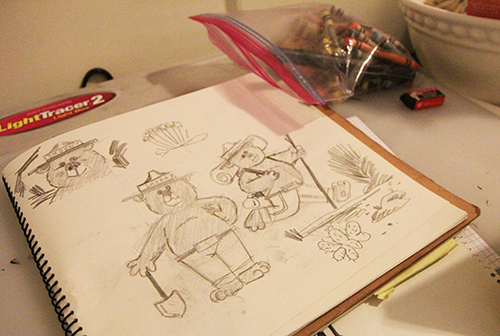 Some of Zach’s latest sketches.

He lets his illustrations speak for him. In this case, it’s the stick-on mural right above his head.

Its giant electric-yellow umbrella, gleefully grinning, has unfurled itself to protect a flower garden from blue-meanie raindrops that are falling like bullets.

If you haven’t met Zach, you’ve probably seen his work. The senior design director for Astoria’s home-grown Bareburger restaurants, he created the logo and branded merchandise for its smokehouse sibling, Salt & Bone. (The Bareburger logo was completed before his time.)

“I try not to take myself too seriously,” says Zach, a tall man whose little-boy face is framed by grown-up glasses that change from green to blue depending on the light. “My work is child-like and child-friendly.” 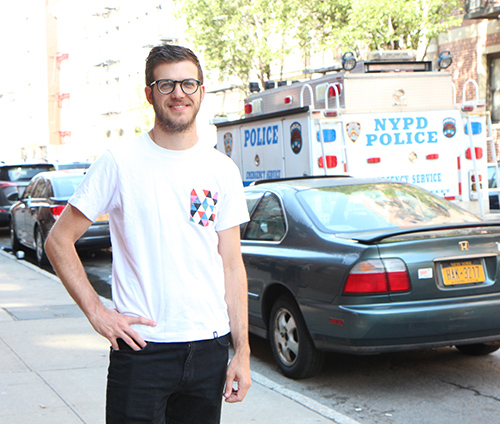 Zach has a degree from the Savannah School of Art and Design.

Zach, whose giggle-generating illustrations are a mash-up of Maurice Sendak, Disney and 1940s styles, has spent a quarter century – his entire life — drawing.

He offers a thumbnail sketch of his 25 years, which he considers a very, very long time to have been on this planet.

He grew up in Elizabethtown, which is in Pennsylvania’s Amish country a couple of bites from the candy Kisses-topped streetlights of Hersheypark.

His mother, a schoolteacher, gave him unlimited access to art supplies. 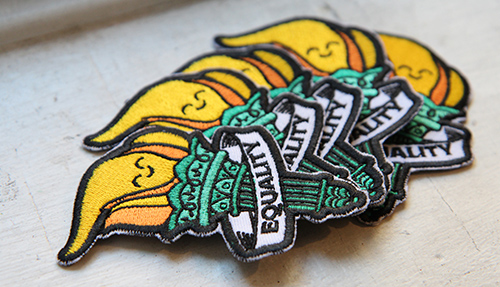 “I never drew on any walls when I was a child,” he says, “but I probably did manage to make marks on some furniture.”

Cartoons shaped the crayon-colored works of his early years.

“Disney’s The Jungle Book showed me characters that had personalities that brought them to life,” he says. “When I saw it, I knew that that’s what I wanted to do and that’s what I strive to do in my work – give characters life so they inspire the next generation.”

Captivated by the celluloid characters, Zach wrote to their animators. 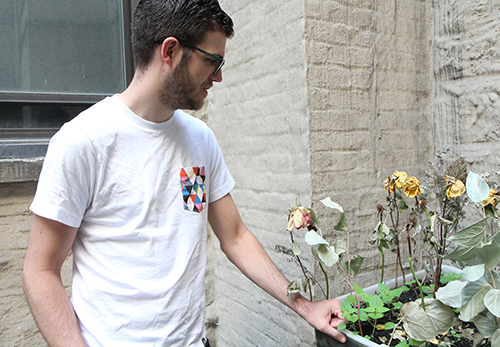 “The people at Pixar actually answered my letters,” he says. “I was 11 or 12, and that motivated me.”

By the time he was a freshman in high school, Zach knew that he wanted to make animation art his life. He set his sights on studying at the Savannah College of Art and Design.

“I only applied to it and one other college — the second choice was my safety school,” he says.

Savannah changed his life. He met his wife, Kara, there.

They were freshmen, and she was studying photography.

“I liked my dorm roommates, but they were smelly and dirty, so I hung out with some other friends upstairs,” he says. “Kara leaned out her door and yelled at us for being too loud.”

Meeting Kara may have been an accident, but changing his career was not.

“I took my first animation course during my sophomore year,” he says, “and I absolutely hated it. All I was doing was making someone else’s ideas. So I switched to illustration, and it’s been fantastic.” 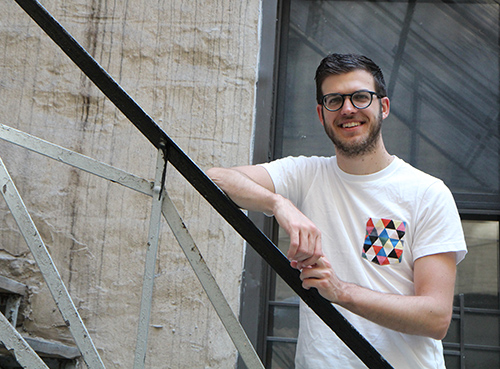 The senior designer at Bareburger, Zach was in charge of the Salt & Bone campaign.

In 2015, Zach further defined his life. In May, he and Kara graduated. In June, they moved to Bushwick, Brooklyn. And in August, they got married.

Yes, Zach admits, that’s a lot of important changes happening in a short period of time. He shrugs. It all worked out.

OK, Brooklyn was a mistake, but it led him to Astoria, so it’s all good.

“We moved to New York because it is the hub of my industry,” he says. “Kara had a job lined up, and I told myself that I would find something.” 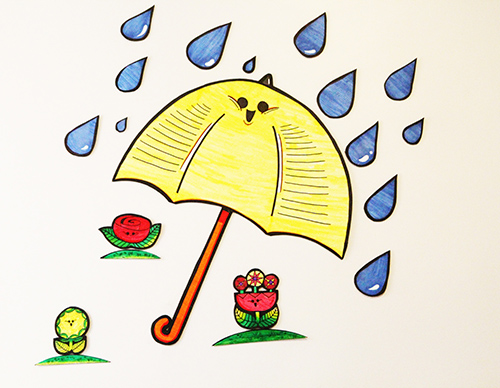 After three months of looking, Zach was about to give up when he saw an online ad for a job at a place he never heard of — Bareburger.

“I got an immediate response,” he says. “I went for an interview on a Tuesday, an hour and a half after they contacted me. On Thursday, I had an interview with one of the owners, and on Friday, they offered me the job. I started on Monday.”

At that time, Salt & Bone was in the works, so Zach did all the design work from the menu to the logo.

“I won the lottery with Bareburger,” he says, “because it has so much personality with it and about it. Kara and Bareburger gave me confidence in myself and my art.” 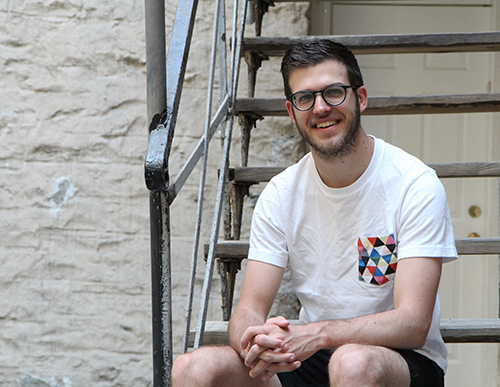 Zach’s work is inspired by Sendak, Disney and 1940s styles.

When his Bareburger day ends (usually at 6 p.m. but often later during what he calls the “crazy” weeks), Zach works on his “wife time.”

They recently took up bouldering, which he says is more fun than it sounds, and Zach is learning hand lettering.

“I love to soak up knowledge like a sponge,” he says.

In their free time, Kara and Zach collaborate on designs for their ecommerce site. 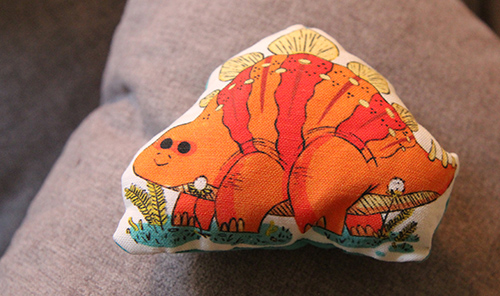 A prototype for a pillow.

Their latest project is children’s pillows that feature the images of dinosaurs.

“When I came to New York, I was hell-bent on getting into the children’s book industry,” Zach says. “So this is a roundabout way of doing that.” 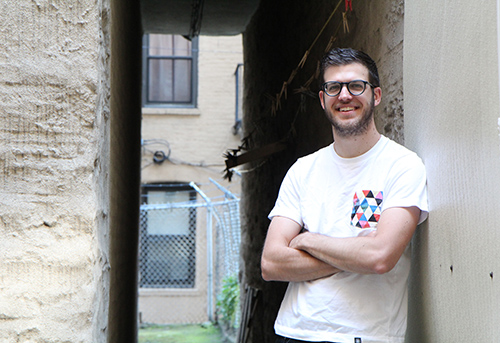 Having a day job and a night job has proved ideal for Zach.

“I love the idea of being an independent illustrator because I only answer to myself,” he says. “But I also love the collaborative aspect of working with other people.”

The balance, he says, is what keeps his imagination working overtime.

It is sponsored by Bareburger and Salt & Bone.