A comet’s tail of hair streaking in the air behind her, Audrey Dimola power-pedals to the front gate of Socrates Sculpture Park on Cherry Bomb, her single-speed Schwinn. 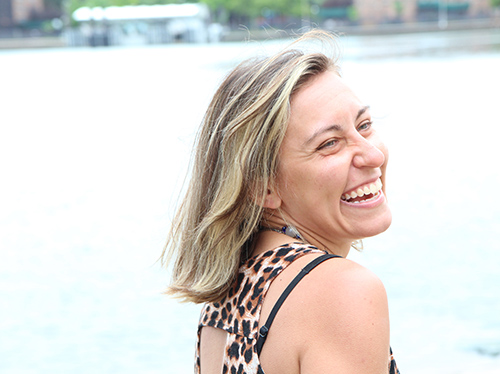 Audrey’s the director of public programs for Socrates Park.

She jumps off her burgundy “chariot of fire,” which is her constant commuter companion, and jubilantly raises her arms in a V.

Because she loves her job. (She’s the park’s director of public programs.) 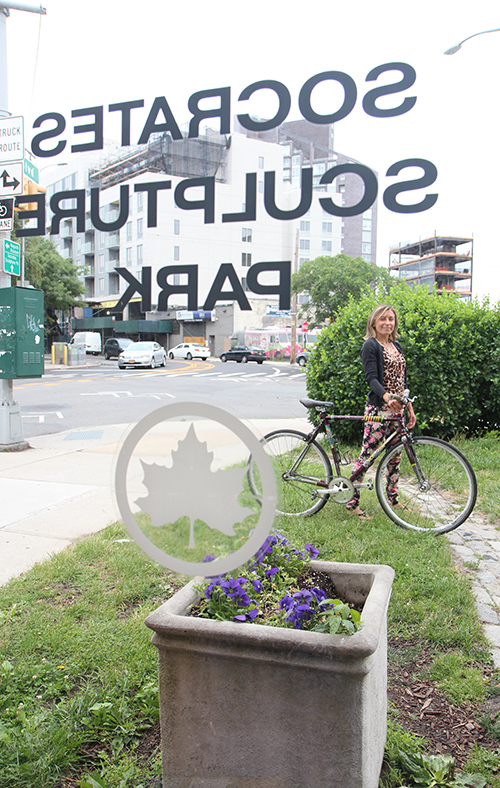 Audrey and the park grew up together.

Because why not? (She’s a proponent of passion and the positive power of the present moment.)

Audrey, for reasons that will become obvious, calls herself Wildfire. She grew up with the park, which was right by her childhood home. 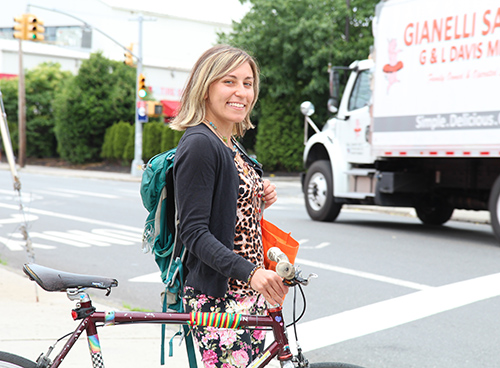 Audrey with Cherry Bomb, her chariot of fire.

In fact, not only are she and Socrates Park BFFs, but they also are the same age: 32.

That, she says, cannot be a coincidence.

After she securely stores Cherry Bomb, Audrey takes a walk in the park. 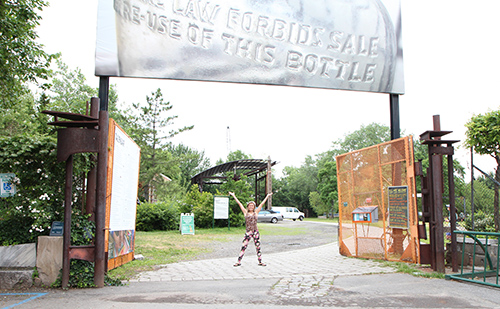 This is how Audrey feels every day.

Well, given that it’s Audrey, it’s more like a run and a climb and a wade in the water.

Audrey, who is colorfully, clashingly and chicly clad in a low-cut leopard print top and black tights abloom with the kind of pink cabbage roses typically seen on old-lady wallpaper, kicks off her black flip-flops and scrambles up a tree, stopping near the top.

Then she sunbathes for a second on the park’s signature stone stage – it doesn’t seem to bother her that it’s a chilly, grey day threatening rain. Next, she plants herself in a border of rhododendrons, softly stroking their leaves. 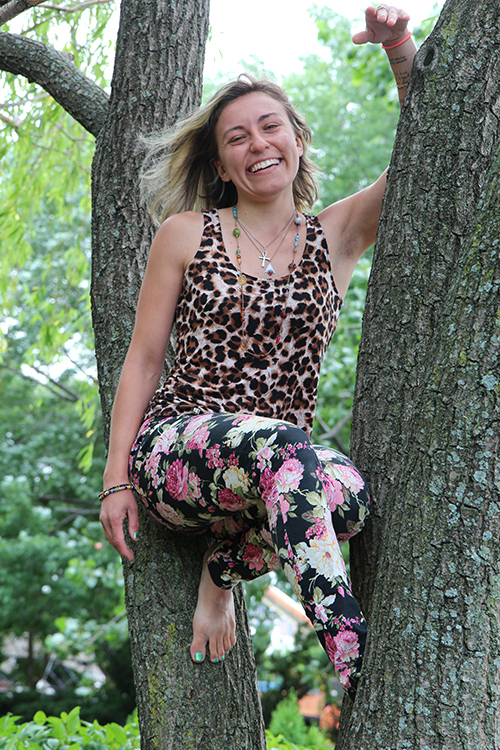 Oh, she has to go to the water! She sits by the skyline, drinking in the view, then leads the way to the park’s baby beach, where she perches on a rock like a statue as the waves do a dance around her toes.

She’s just about to head to her office, which is across the street, when she realizes that she hasn’t spent any time on Virginia Overton’s balance beam. 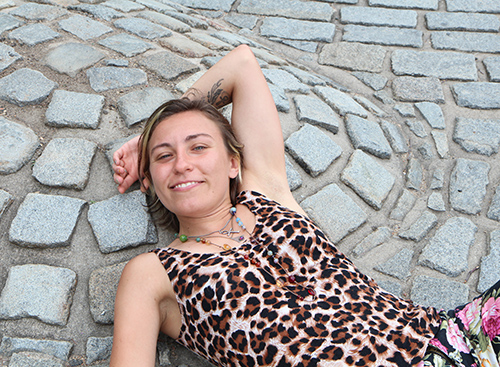 So she scales the swaying sculpture and walks serenely across, toes pointed like a ballerina’s.

Although Audrey’s been in the park thousands of times – that’s where her job requires her to be, hooray! – it’s as if she’s seeing it for the first time every time.

That’s because Socrates has always been Audrey’s sanctuary. 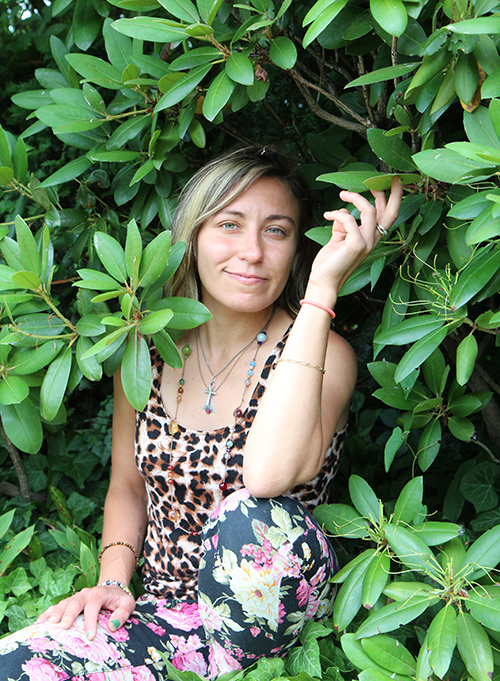 Peeking out of the rhododendrons.

“I feel free when I’m here,” she says. “And whatever was going on in my life, I would come here to sit by the river and write.”

Audrey, a self-described child ham, planned to have a creative career. But by the time she was studying at Hunter College, her creativity had all but come to a halt, so she settled on what she thought would be a safe degree, in media studies, and got a job with a Long Island City arts magazine, where she quickly rose to the position of managing editor.

Two years later, she switched to a blog, producing stories about the neighborhood. After a year, she became a project manager for an Astoria-based tech start-up. 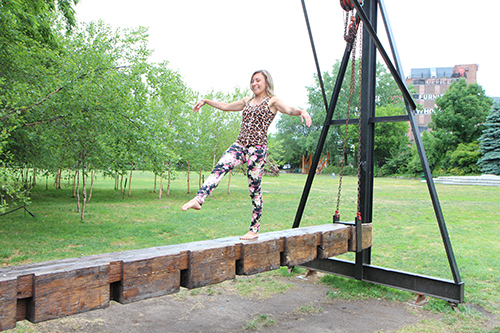 “I loved all these jobs because I got to do a lot of things, and I learned a lot,” she says.

But in 2012, Audrey began a series of jobs that didn’t feed her passion. 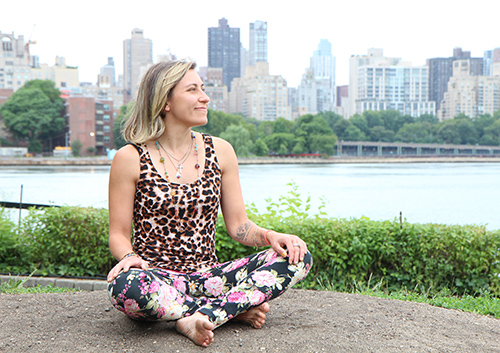 Drinking in the water view.

“I did things on the side, like writing books,” she says, adding that she published Decisions We Make While We Dream that year. “That’s how I kept myself going.”

Audrey, who calls herself a “sojourner,” finds that long walks are conducive to her creativity.

“I consider myself a messenger,” she says. “Writing, especially writing poetry, is my lifeblood. Everything speaks to me. That’s why I walk around with my marbleized notebooks — to find beautiful moments of aspiration.” 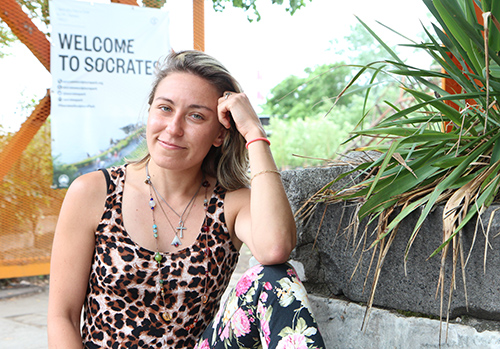 Audrey and Socrates were born the same year.

Eventually, Audrey found her way back into project management. She wrote her second poetry/prose book, TRAVERSALS, got engaged to an artist and moved to Brooklyn.

“In 2015, I called everything off – I left the guy and the job, and I crashed-landed with my parents at my childhood home,” she says. “The first thing I did was go to Socrates’ Halletts Cove Beach. All I could think was, ‘I’m almost 30. What the hell have I done? I’ve shattered my life, and I can’t fit back in my old life. I guess this is the beginning of the real story.’”

At first, Audrey’s life was more like a sequel than a new beginning. She had more time than money so she took any and every job that came her way. 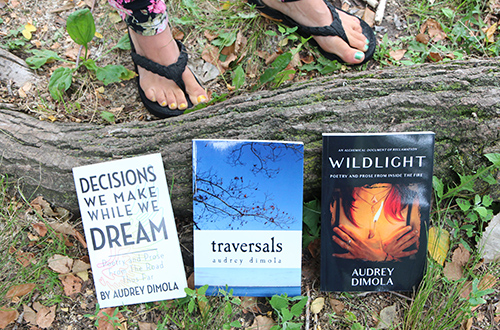 Audrey is the author of three poetry/prose books and is working on No. 4.

“That’s when my life literally changed forever,” she says. 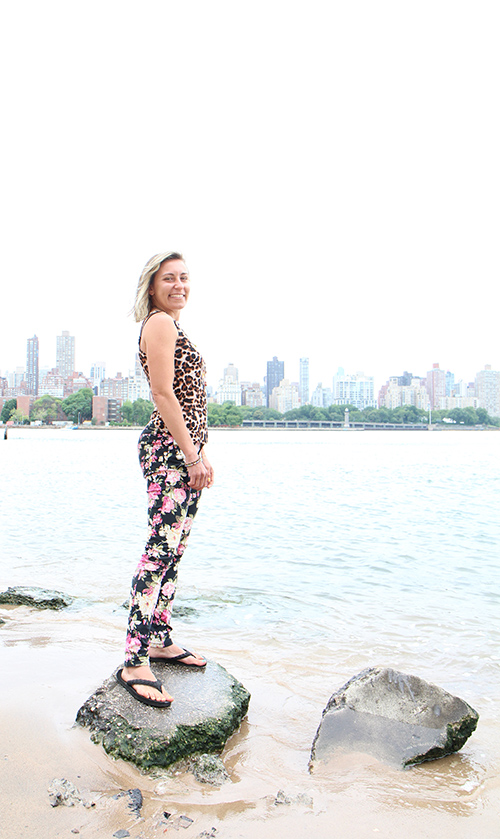 Photo by Nancy A. Ruhling
Audrey at one with her environment.

Later that year, when the director of public programs decided to leave, she encouraged Audrey to apply for her position.

“She saw me with a capital S,” Audrey says. “And she made me realize I had a place at an arts institution.” 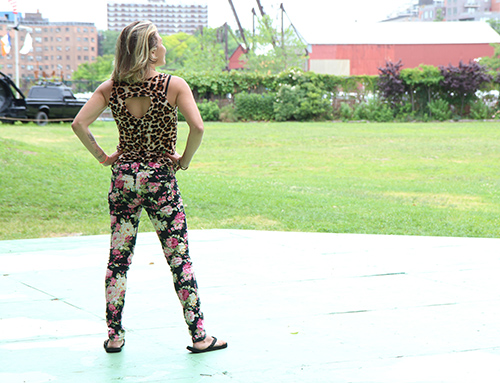 Audrey on stage at Socrates, right where she belongs.

In January 2017, Audrey became the director of public programs. In that role, she has produced a variety of free public events ranging from musical performances and dances to yoga classes and kayaking.

“Working at Socrates is such an incredible opportunity,” she says. “I feel aligned with the original energy of the space, and I feel it’s my responsibility to uphold it.”

Audrey, who has just published her third book, WILDLIGHT, and is getting ready to write No. 4, says she and Socrates have had such a long history and are so in sync that she can’t see herself being anywhere else.

“This,” she declares as she stands on the stage and looks out over the park’s lawn, “has become my life.”

A free, public event, it is sponsored by Bareburger and Salt & Bone.