He never would have done it if he hadn’t lost his job. But John Colgan got bored. He’s not the kind of guy who can sit on the sofa surfing channels. No, he has to be out doing something.

When his paychecks stopped, he moved back to his childhood home and the company of his mother. As he sat on the front stoop, he watched the rest of the world walk by. That’s when he noticed the fire alarm pull box on the corner. 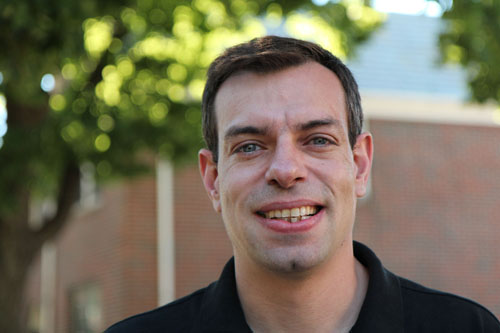 Photo by Nancy A. Ruhling
John lost his job and found a purpose in life.

He and that box had grown up together. In those days, the 1980s, there was a car arsonist who lit a match just about every weekend, and John was one of the kids who got to pull the lever to summon the fire trucks.

Like John, the box looked as though it needed a little help. It was painted Pepto-Bismol pink, so John threw a coat of Apple Red Rust-Oleum on it to make it more presentable.

“I wanted to do something to help the community bring pride back to the neighborhood,” he says. “I already had covered up the graffiti on the light poles and had painted the fire hydrants black and silver.” 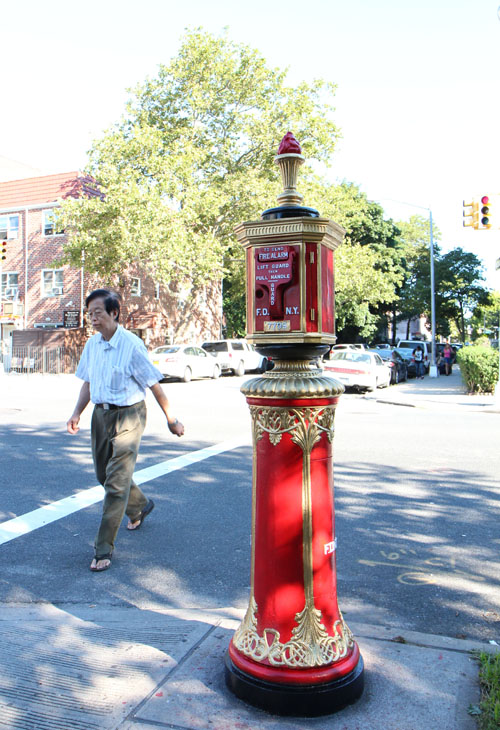 Photo by Nancy A. Ruhling
John’s handiwork at 54th Street and 32nd Avenue.

John, a blue-eyed beanpole, and his spray cans and baby brushes followed the boxes, and before he knew it, he had painted the 13 along 51st Street to 61st Street from Northern Boulevard to 30th Avenue.

At first, John made them all red, but soon he started to cherry-pick the details in gold. He began with the flaming torch on top and worked his way around the scrollwork on the base.

“But they still didn’t look right,” he says. “Then one night I had a dream where I saw how all the lines of gold connected. I got right up and started painting.” 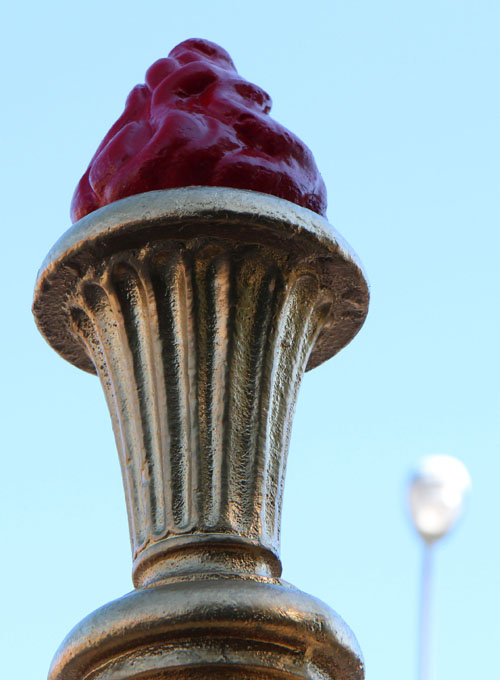 Photo by Nancy A. Ruhling
The fiery torch of an early alarm box.

In a way, painting the boxes connected John with his own past. The youngest of four, John was the “buttered bun,” the happily spoiled child who could do no wrong. His mother wouldn’t let him: She was a sixth-grade teacher the neighborhood kids looked up to.

From her seat in the living room lounge chair, she reminds him that he was really good at putting together model airplanes and ships when he was a boy. Oh, he had forgotten that.

At an early age, he learned the value of volunteerism. In high school, he worked with the handicapped, and his family took in a mentally challenged neighbor when he was a youngster. They still keep in close contact with her. 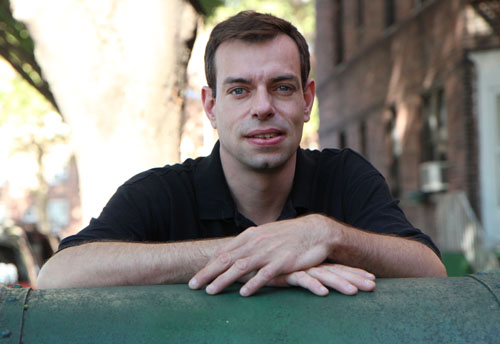 Photo by Nancy A. Ruhling
John started with light poles and fire hydrants.

John tried his hand at college, but a good job always intervened.

Through the years, he worked in offices and on construction sites. He always landed on his feet. Until two years ago.

So he has made the fire alarm boxes his life’s work, pouring his passion into his painting. 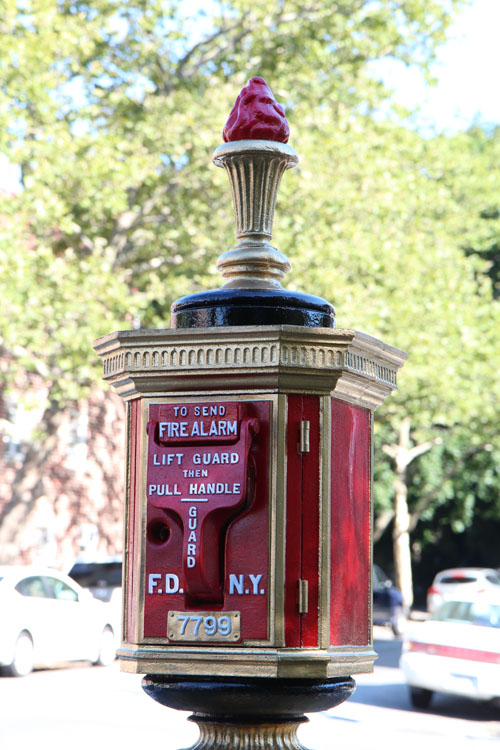 Photo by Nancy A. Ruhling
It takes John up to 24 hours to paint one alarm box.

“It’s become an obsession,” he says.

Generally, he and his bright orange ladder are out in the evening; it’s cooler then, and the paint dries better. He works on three styles of boxes — the fancy 1921 and 1931 versions and the sleeker 1957 models.

It takes John about 24 hours to complete a box, and he’s had to repaint several five or six times since he started. He’s spent about $1,000 on the project. His mother gave him the money. 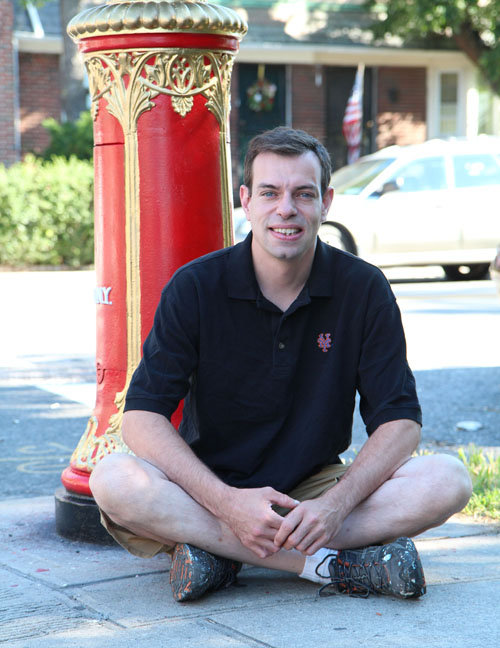 “People always stop to watch,” he says. “Sometimes, they tell me that it looks great or that there’s too much gold. Other people have told me that it reminds them of temples they have seen.”

Of course, not everybody gets what John does. A couple of people told him they were going to call the cops. 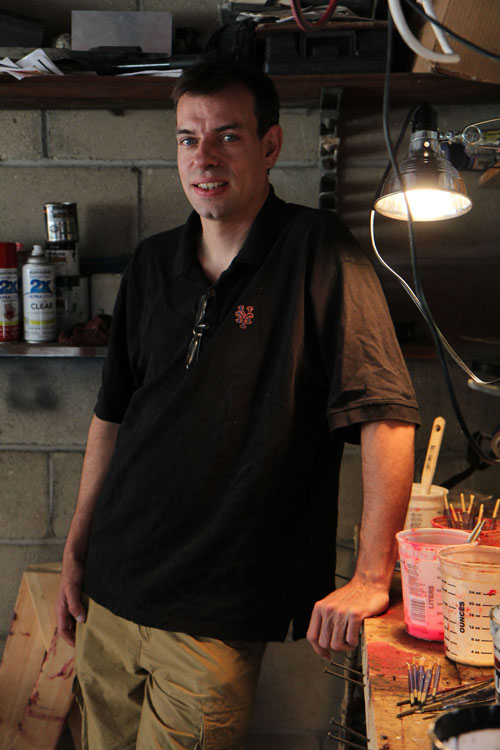 Photo by Nancy A. Ruhling
John at fire alarm box central: The workbench in his mom’s garage.

And his girlfriend left him over it.

When he’s not on his ladder, he’s upstate walking in the woods with Tiffany, his dog, who follows him around his mother’s house and whines when he leaves to paint the boxes.

She’s a chihuahua mix, and she wasn’t supposed to be with John. An ailing friend asked him to take care of her, and the arrangement became permanent.

“She’s the love of my life,” John says as Tiffany sits next to him on the sofa. 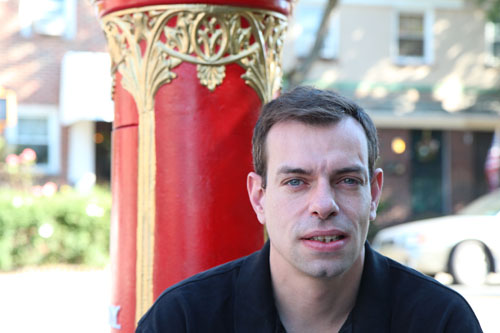 Photo by Nancy A. Ruhling
He’s not ready to put down his paints.

Even when he gets a full-time job — he could land one any minute now — John will not abandon the alarm boxes. In fact, he’s hoping, and this is a real long shot, that he could make his living teaching others how to paint them as part of neighborhood beautification projects.

When he thinks about the box outside his mother’s house, the one he just spent 18 hours retouching, he frowns.

He’s worried about the gold. He’s tried several kinds of paint, but the harsh rays of the sun strip the shine. Is there anybody out there who can tell him what to do about this?