They answer the door in that order — Dom Tancredi, Tom Tancredi. They have their routine down to a T. In this case, Dom’s T has a bright blue pyramidal design that matches the color of Tom’s T. Different yet just enough alike to declare their common identity.

There’s a reason the Tancredi twins go by Dom and Tom: It’s the rhyme. “We have a little brother named Joey,” Dom says mischievously. “He broke our rhythm.” 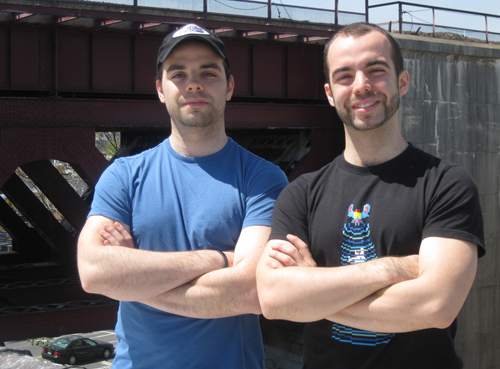 Photo by Nancy A. Ruhling
Tom and Dom, in that order, look alike but aren’t quite doubles.

The web and mobile app developers, whose company is aptly named Dom & Tom, are huddled around a stark black work table in their apartment, Apple MacBook Pro laptop, iPhone, iPad and Kindle at the ready for any and all questions.

“Sorry that the iPad screen is all smudged up,” Dom says jokingly. “We just got it, and we’ve been so excited we’ve been pressing our noses against the glass.”

In a whirlwind conversation traveling faster than a speeding e-mail, Dom (the funny man) and Tom (the straight man) touch on everything from rooftop barbeques, Alice in Wonderland, the artwork in their apartment by childhood chum Jeffrey J. Kmoch and the Android smart phone to Lucky Charms boxing briefs, Eagle Scouts and forensic accounting.

To set the record straight, Dom and Tom are fraternal, not identical, twins. Dom is a full two minutes older than Tom, not that it makes any difference to them. “We are like this,” says Dom, holding up his fingers to form a crooked square. “Anything I can’t do, Tom can do.”

“I’ve been having a lot of fun working with Dom,” Tom says, confiding that “I’ve known him for a long time.”

Dom shoots him an if-you-only-knew look. “I’m gearing up for a one-on-one; I’m going to buy you out,” he jokes.

The twins settled in Astoria because it reminds them of their hometown of Chicago. The Windy City is only two hours away by plane; Dom and Tom easily can make it home in time for dinner. They have had a twin interest in the gaming of technology since, golly, it must have been after they graduated from kindergarten.

“For seven years — from about first grade until about our sophomore year in high school — we used to have sleepovers with our friends where we tried to come up with a game per weekend,” Dom says. “So we were game programmers and developers before we even knew what that was.”

They found that they liked to hang out together, and they pursued some of the same interests. They both are Eagle Scouts and gymnasts. Dom gives the parallel bars a workout; Tom prefers the pommel horse.

“We’re into doing funky things with the body,” Tom says.

Adds Dom, “We have to engage the mind, too.”

Dom’s dancing on the treadmill, well, that was a little too funky for Tom; Dom still thinks it’s a good idea.

“It’s definitely tough being twins,” Tom says, “because you find your best friend and worst enemy is your twin. I used to always wonder with girls why they wanted to be with Dom and not me. I would think, ‘Why are you into this guy who is 99 percent like me, and you’re not into me? I can give you the 100 percent!'” 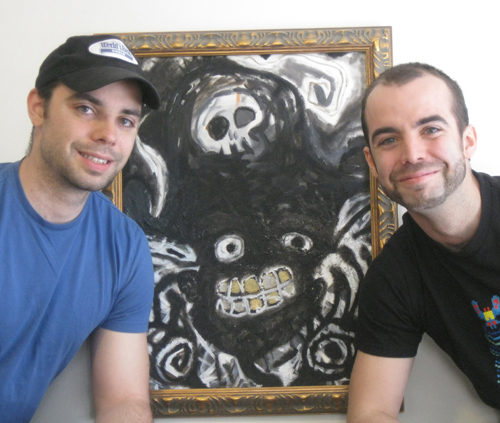 Photo by Nancy A. Ruhling
Tom and Dom with art by Jeffrey J. Kmoch.

When it came to college, Dom and Tom enrolled at Loyola University in Chicago. They were roommates. “We got to sleep in bunk beds, which we hadn’t done since we were nine,” Dom says. “Hey, we should do that again. Our girlfriends would love it!”

Then, a week before 9/11, Tom transferred to New York University. Tom earned a bachelor’s degree in TV writing from NYU; Dom graduated with bachelor’s degrees in theater and computer science from Loyola.

When Tom didn’t get a job in TV, he began working in the financial department for a large law firm. And when Dom graduated, he began traveling around the world and doing freelance technology work.

“I was couch surfing with random people and living out of my backpack,” Dom says. “I don’t need a lot as long as I have my laptop.”

Tom quit his job and earned a master’s degree in finance from Baruch College. Dom found a 9-to-5 technology job and continued to work with private clients.

So it was that Dom and Tom moved in together and two years ago became Dom & Tom Inc. 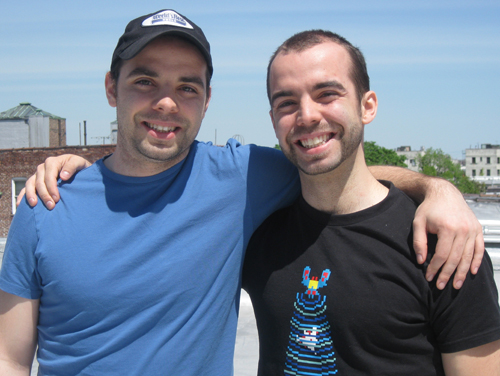 Photo by Nancy A. Ruhling
Tom and Dom, aka Dom and Tom Inc., brothers and BFFs.

Although they started out working in their apartment, Dom and Tom now have offices in Manhattan. New York University recently gave them incubator space and they have a growing cast of team members and off-site developers. At the annual iPadDevCamp 2010 NYC, their “Ghost in the Machine,” an Ouija-board like iPad app game, won the “Best Use of an iPad” award and will be sold on iTunes.

“Where do I get my ideas?” Dom asks. “I look at the object, whether it’s a phone or a surfboard, and ask myself, ‘What can I do with this?'”

Dom and Tom say that Dom & Tom will always stay ahead of the curve. “Doing the new thing is what keeps Dom going,” Tom says.

Says Dom, “Our goal always is to do good work with good people. In the future, I’d like to do something that merges live entertainment with multimedia.”

Right now, though, the twin thing is still on their minds. They point out that they don’t look enough alike to pass for each other. “It does work on the phone, though,” Tom says. “Sometimes we can fool our girlfriends.”

And they don’t dress alike, although they do wear each other’s clothes. “We did have the same underwear at one time, and we didn’t even know it,” Dom volunteers. “There were two pair of Lucky Charms boxers floating around the apartment.”

He looks at Tom’s baseball cap, the one that declares he’s “The World’s Best Uncle.”

“We are uncles,” Dom says, “but Tom bought that cap for himself.”