Near the end of a residential street of attached row houses, there’s a small storefront whose plate-glass window proclaims “ALPHA SCHOOL OF MUSIC” in bright gold letters that are surrounded by a melody of dancing musical notes. The front door is adorned with a golden treble clef.

In the waiting room, whose walls are lilac with dark purple trim, an eclectic variety of stringed instruments that range from the oud to the electric guitar are suspended from the ceiling like clothes in a closet. There’s an overstuffed sofa and an extra-wide, extra-comfy chair. The faint scent of long-ago cigarette smoke lingers like the last guest when the party’s over. The coffee table is filled with magazines and books; several issues of Men’s Journal are stacked next to kiddie lit like Dora’s Nursery Rhyme Adventure.

The door to one of the studios opens. Musician George Vlesmas, Alpha’s owner, emerges with his student, a middle-aged man who is carrying a bouzouki. 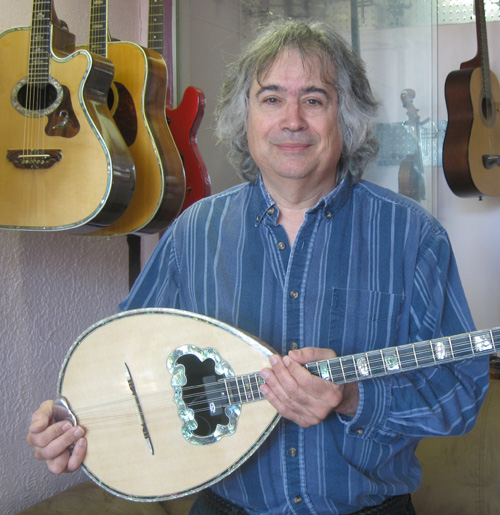 Photo by Nancy A. Ruhling
All his life, George has been singing the praises of the bouzouki.

“I had a good time,” the student says as he places his instrument back in its case. “What a blast!”

George, a broad and tall man with a shaggy head of shoulder-length hair that once was all black, smiles. He has devoted his life to the pursuit of the bouzouki, the Greek stringed instrument with the pear-shaped body and swan-length fretted neck that resembles a mandolin and sounds like a chiming harp.

“Greek music is in my blood,” says George, who spent his childhood between America and Greece. “I grew up with it.”

George, who was born in Chicago but never lived there, started his musical career in his formative years. “My father was a clarinet player,” he says. “I used to hear him play music all the time. By the time I was 16, I was playing professionally at weddings and specialized in the bouzouki.” 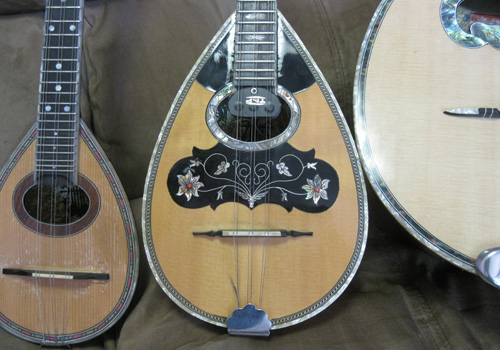 Photo by Nancy A. Ruhling
The bouzouki resembles a mandolin.

He chose the bouzouki because “its music comes from the soul. Most bouzouki players don’t read or write music, and it doesn’t involve so much theory. It’s not a matter of notes all written down because each person will phrase it differently. It’s not like Mozart where you have to play the notes the same way.”

Other kids may have been into rock and roll, but Greek music sang to George’s soul. “It has a particular sound,” he says. “What attracts people to this kind of music is what the player has to say. You can identify with it, whether it’s pain or happiness. When I was growing up, most of the songs were sad, which reflects the drama of the culture.”

Soon, George hit the Greek nightclub circuit, which was hot in Astoria in the 1970s and 1980s as waves of Greek immigrants arrived. “I also played the double bass,” he says. “I was going to Julliard during the day and the nightclubs at night. When the schedule got too rough, I dropped the college.”

Photo by Nancy A. Ruhling
George’s bouzouki is beautifully decorated with intricate inlays.

For a quarter century, he played at the clubs and for special events, including weddings. From 1986 to 1997, he was one of two principal bouzouki players in the Trio Bel Canto, a famous Greek band that traces its history to 1948.

After he left the Trio Bel Canto, he began teaching, and in 2000, he opened Alpha, which has the distinction of being the only music school in Astoria where the bouzouki is taught. Its four teachers also give instruction in piano, guitar and violin. 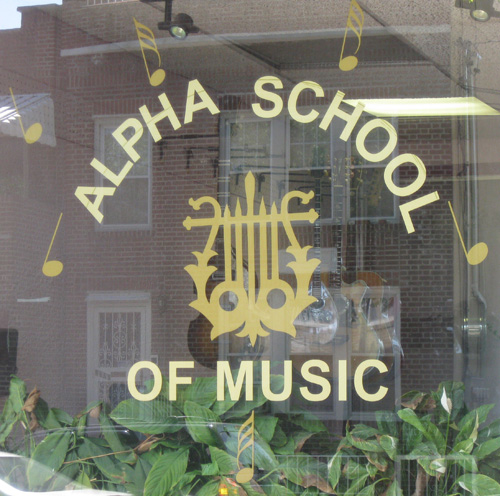 Photo by Nancy A. Ruhling
Alpha is the place musicians go to learn the bouzouki.

Students from as far as Hartford, Conn. and Philadelphia come to Alpha for bouzouki lessons with George, who also teaches one student in Spokane, Wash. and one in Switzerland via Skype.

“My students play the bouzouki because they love the music,” he says. “For them, it’s personal enjoyment, an escape from the world. They have no desire to become professional musicians.”

Although Alpha is open seven days a week, George is only on the premises Mondays through Fridays. On the weekends, he plays at events in his own band, Alpha Music.

“I’ve played all kinds of music,” George says. “There was a time when I stopped playing the bouzouki. I reached a point where I just had too much of it, and I wanted something different. A couple of years later, I came back to it.”

He’s composed his share of music, and he made an album. “It was only for myself,” he says. “It was a combination of music from all over the world. I even used the bouzouki to do Brazilian music.” 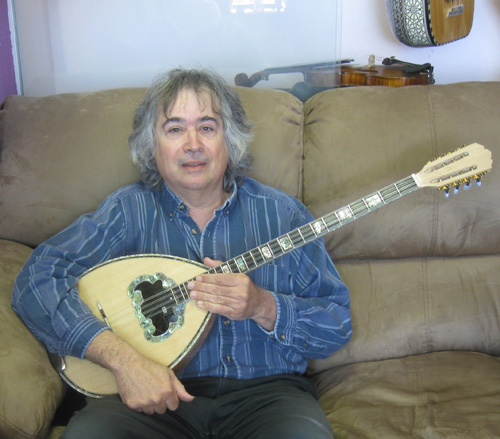 Photo by Nancy A. Ruhling
George and his bouzouki make beautiful music together.

George is no philosopher. He goes where the notes lead him. The destination is immaterial, and it’s not something he’s consciously thought about. He likes this gig and as far as he’s concerned, he’ll be content to make Alpha his omega.

Right now, his attention’s on the present moment. It’s time to give the next lesson. The student, a professional percussionist of Egyptian origin, picks up a bouzouki and begins strumming.

“I love the sound!” he exclaims.