At the top of the stairs, Dexter the pit bull is waiting exactly where Wendy DeSarno told him to sit when she went to answer the door.

His pencil-thin tail is wagging, and he’s sniffing and licking me as I stand as still as a statue, but his cute little butt is glued to the floor until she gives the word.

Wendy is a dog trainer. She has CPDT and CTC behind her name. But Dexter doesn’t know that. He also doesn’t know that CPDT stands for Certified Professional Dog Trainer and that CTC means she is a Certified Trainer and Counselor. He’s only a puppy — he’s a 1 1/2-year-old rescue dog — and he’s come for a visit, not a lesson. 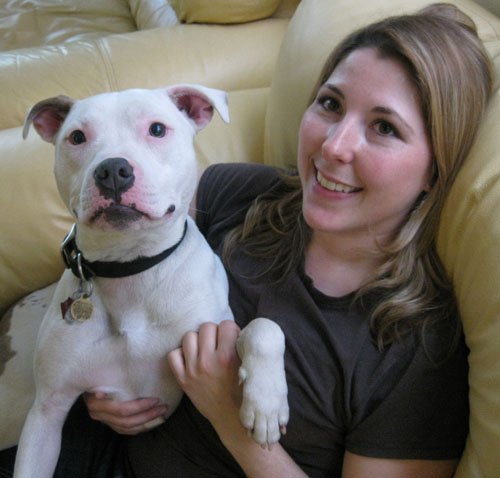 Dexter, whose white body has spots the color of instant coffee and Wendy’s hair, follows his new friend to the living room and sits at her feet as she commands.

“Good Boy, Dexter!” she exclaims as she pulls a treat out of her little black doggie bag. Dexter gobbles the dried beef fillet and trains his light brown eyes on her.

“I’ve always loved animals and felt a connection to them” says Wendy as Dexter gives her a big sloppy kiss and nuzzles his nose in her hair. “I was never afraid of them.”

Wendy doesn’t have a dog now — the pitter patter of puppy paws is not allowed where she lives — but she’d love to own a pit bull like Dexter, who at her invitation has settled in for a short snooze on the sofa. 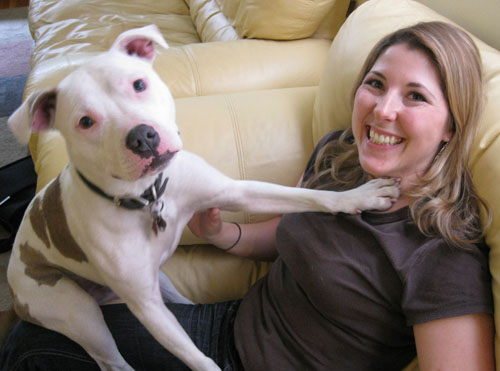 Photo by Nancy A. Ruhling
When Wendy speaks, Dexter is all ears.

“I love big, fluffy dogs, but there are so many pit bulls in shelters who need homes that I’ll probably end up with one of them,” she says. “Pit bulls have such a bad reputation, but they are the sweetest dogs. You shouldn’t stereotype them. They are companion animals.”

There, unfortunately, has been only one dog in Wendy’s life. “I kept asking for a dog when I was a little girl, and every Christmas, it was the only thing on my list. I used to write D-O-G in big letters,” she says.

There really was no reason not to have a dog. Wendy, an only child, lived in Franklin Square, Long Island. She had a typical American suburban childhood. “I guess you could say I’m a mutt,” she says. “I’m part Italian, English and Hungarian.” 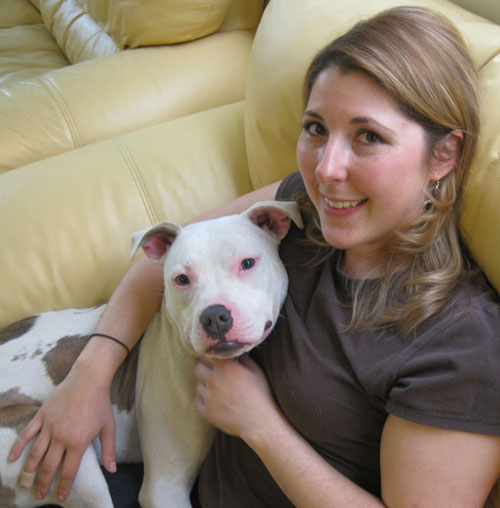 Photo by Nancy A. Ruhling
Dexter is a puppy: He’s doing his best to obey Wendy.

The house didn’t have a white picket fence, but it did have a back yard big enough to let a dog run around in. Finally, at age 12 — “that’s an eternity for a child to wait” — Flopsy, a 10-month-old bearded collie from the North Shore Animal League, joined her family. “We didn’t know anything about dog training,” she says, “and we had the usual little accidents like chewed shoes.”

By the way, where’s Dexter? Oh, he’s wandered into the bedroom; he’s exploring because he’s never been here before.

“Dexter!” Wendy calls. And, sure enough, Dexter trots out. As Dexter discovers, Wendy is sweet yet strictly business: He only gets a “good boy” not a treat because his timing was slow.

Anyway, Wendy thought perhaps she’s be a veterinarian, but she ended up earning a communications degree from Hofstra University and taking a “lame corporate job” after graduation.

It was only after she broke up with her boyfriend, who owned a lab/shepherd mix named Dakota, that she changed her career course. “I realized that I liked the dog more than the guy,” she says and laughs.

Soon, she was volunteering with The American Society for the Prevention of Cruelty to Animals in Manhattan. “I’ll never forget the first dog I attempted to train,” she says. “It was a pit bull — her name was Megan — and she was high energy and a handful. The staff trainer coached me step by step. It was so cool that the dog was listening to me and learning from me and I thought, ‘I have to do this for a living.'” 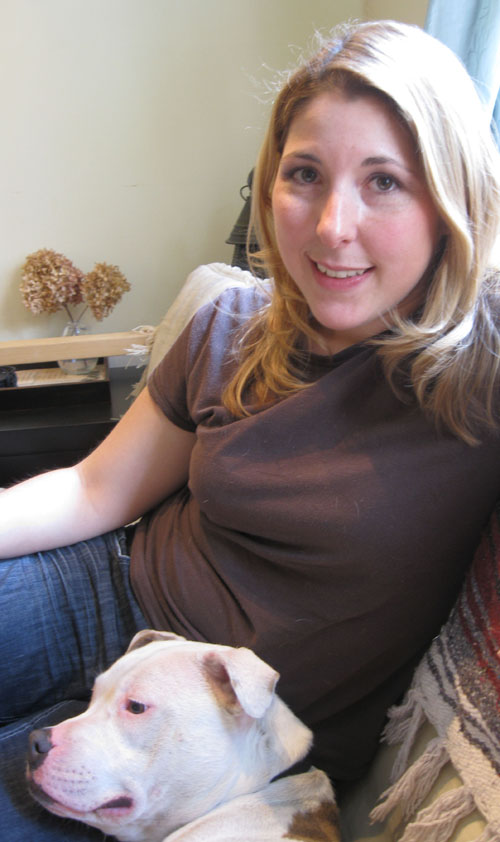 Photo by Nancy A. Ruhling
Training is hard work, and Dexter is one pooped puppy.

Wendy has impressive dog tags: She earned her Certificate in Training and Counseling from the San Francisco Academy for Dog Trainers, aka the Harvard of its breed, and her CPDT from the Certification Council for Professional Dog Trainers.

Now, with her own business, Good To the Bone, she makes house calls in the New York metro area, working with other trainers, and holds group sessions at The Jumping Bulldog in Astoria.

“I love feeling the connection with the dogs,” she says. “I love the communication across species lines. I end up not only treating the dogs but also the owners. When the owners get the connection and get that ‘aha’ moment, that’s what I find rewarding.”

Using Dexter as her demo dog, Wendy shows how simple it is to get him to do her bidding. There are two techniques: With capturing and shaping, the dog is rewarded for “guessing” what the owner wants; with luring, the dog follows the treat to get the moves right.

“The biggest mistake people make is unintentionally rewarding unwanted behavior,” she says as she gets Dexter to sit and roll. “If your dog barks and you give it a treat to get the barking to stop, guess what: You’ve just taught your dog to bark to get a treat! You need to teach what’s ‘yes’ before you treat what’s ‘no.'” 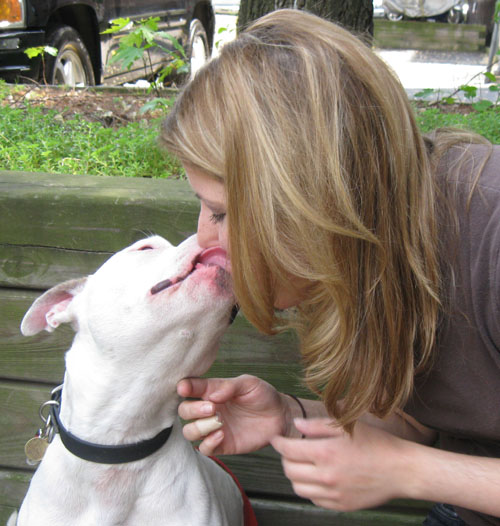 Photo by Nancy A. Ruhling
The ultimate reward: A well-trained dog and a well-planted kiss.

Dexter, who hasn’t completed his schooling for rolling over, gets about a C for his average efforts, which are greatly improving. “There’s no such thing as an un-trainable dog,” she says as Dexter sits at her feet. “It’s a matter of how consistent and dedicated you are.”

Someday, Wendy wants to open her own training center and in addition to private lessons, train therapy dogs to work in hospitals and senior citizen centers.

“I’d like to be the face of Astoria dog training,” she says. ‘But right now, I’m having a good time helping people with their pet dogs.”

With that, she leashes up Dexter, who sits, tail wagging, eager to obey her every command.