The sound swells like an ocean wave until it fills the room with its eerie, otherworldly vibrations. At its height, it screams like a Siren then suddenly sinks into a soulful sotto voce.

Does this tune come from heaven or hell?

It emanates from a saw — the carpenter’s tool that’s used to cut wood.

“People tell me that it doesn’t sound anything like they thought it would,” says The Saw Lady, who gives the instrument its voice. “Some people even think I’m singing, not playing. I like to liken it to being near a big bell or a gong that is ringing.”

The Saw Lady, she of the fiery eyes and the ravishing, flaming-red Pre-Raphaelite locks, took to the saw some two decades ago. It was desperation not desire that drove her to its flashing steel. Up until that time, The Saw Lady had been Natalia Paruz, a dancer, taking lessons in everything from tap and flamenco to ballet and jazz. 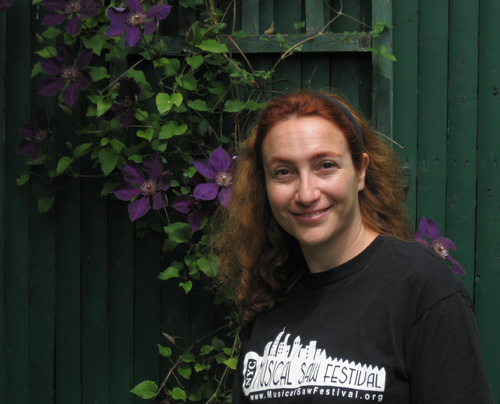 Photo by Nancy A. Ruhling
Natalia didn’t see a saw in her future.

Born in Israel, Natalia grew up traveling the globe — her mother was a concert pianist and her father was an academic — playing several musical instruments, including the piano and the guitar.

“I had tried all the traditional musical instruments but none of them grabbed me, so I went into dance,” she says.

After serving her mandatory two years in the Israeli Air Force, two decades ago, Natalia followed her parents to Manhattan, where she studied with Alvin Ailey and Martha Graham. “I fell in love with the Martha Graham technique,” she says. “It’s all about telling a story through dance. It’s acting through dancing.”

Just as her career was beginning, it ended when she was hit by a taxi as she was leaving Lincoln Center. She suffered a permanent injury to her upper spine. “My whole life was taken away from me,” she says. “I feel a constant, dull pain. I can walk, I can run, I can play the saw, but I can’t dance.”

She remained at loose ends until she saw a saw on stage during a family trip to Austria. “I was mesmerized by the sound, which is not only very unusual but also very visual because the entire instrument moves and bends in the air,” she says as its undulating form flashes in the sunlight like a leaping lightning bug. “It’s like dance.”

Soon, she borrowed a saw and figured out how to make it sing. “I experienced the art form in the traditional way,” she says. “I didn’t take lessons — I couldn’t find anyone to teach me. In the old days, you didn’t take lessons, you tried to figure out how to do it, and if you did, you were meant to play.” 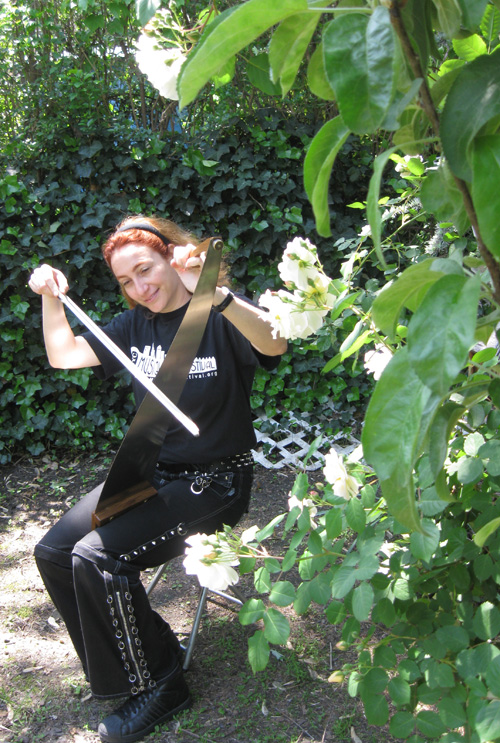 Photo by Nancy A. Ruhling
The Saw Lady puts her instrument through its paces.

Her first gig was for the Salvation Army in Astoria. “My neighbor had heard me practicing,” she says. “Before I knew it, I was booked at lots of senior centers.”

Natalia, who believes she is the only person in the world to make her living playing a saw, has performed with the Israel Philharmonic Orchestra and at Carnegie Hall, Lincoln Center’s Avery Fisher Hall and on NPR radio’s A Prairie Home Companion. She’s working on her second album and getting ready for Saturday’s eighth-annual Musical Saw Festival, which she founded in 2003. Last year, the festival set the Guinness World Record for the “largest musical saw ensemble” when 53 players put bows to steel.

“There aren’t many women who play the saw,” she says. “You have to be physically strong to do it. When I started out, I used to sit and watch TV while I practiced bending it.”

Natalia, who practices four hours every day and gives an average of three performances per week, has some two dozen saws in her collection. When she rehearses, her six cats are all ears.

Her favorite instrument is a 32-inch custom stainless steel saw made in France that has a range of 3.5 octaves. “The longer the saw’s blade, the more notes it has,” she says. “Mine is toothless because I play in a lot of public spaces, and the police told me they considered it a weapon.”

Once Natalia mastered her saw music, she began exploring other unorthodox instruments. She has a collection of more than 700 bells that range from dinner bells to doorbells. They stand mute most of the time on the shelves that reach the ceiling of the 1905 wood-frame house that’s painted forest green. Not so with the cowbells: She plays tunes on them.

“I first saw them in Austria, on the same trip where I saw the saw,” she says. “I noticed that each cow had a bell and that the pitch changed from herd to herd. ‘Happy Birthday’ was the first tune I played.” 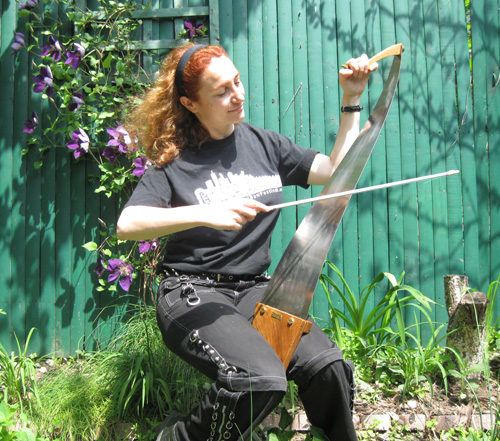 Photo by Nancy A. Ruhling
Natalia’s performance is all about hearing — and seeing.

Her newest instrument also is her oldest. She points to a circa 1830 box that looks like a child’s coffin and opens its lid to reveal a glass harp: 25 hand-blown glasses whose stems are standing in wooden anchors. They are perfectly pitched — each contains a handwritten label from the previous owner, a museum director — and cover two chromatic octaves.

She washes her hands to get the oil off and dips them into a container of water. She runs her fingers across the top of one of the glasses and like magic a crystal-clear sound emerges and reverberates.

The harp is fragile; Natalia won’t be taking it to any public performances, but she’s excited about the prospect of featuring it in a future recording that will include all the bells and saws. 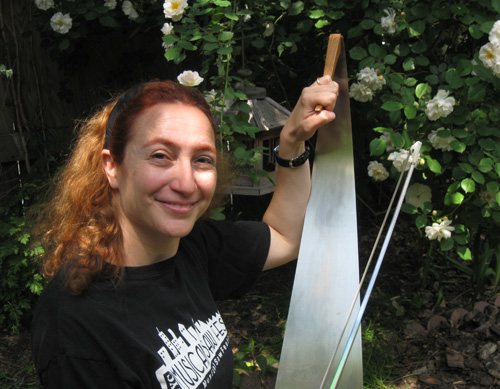 Photo by Nancy A. Ruhling
Natalia wants the world to see the saw as a serious instrument.

Which reminds her of another instrument, this one of her own invention. Natalia likes wind-up music boxes, so she removed the movements of seven and mounted them together on the wall in a mesh-covered speaker box. She turns them all on so she can listen to the crazy chorus of crescendoing cacophony; it’s a distressing dissonance like chattering chipmunks and chirping canaries conversing.

“You can’t tell which melody is which, which is why I like it,” she says, grinning. “I try to train my ear to decipher the different tunes, but it’s impossible.”

Her makeshift music box, now that’s a true novelty, Natalia says. But when it comes to the musical saw, she’s as clear as a cowbell that although it has a reputation as a novelty instrument best played during gag gigs, it is a serious player. She points out that several composers, including George Crumb, have written solos for it in their compositions and that its range includes everything from American musicals’ tunes and orchestra pieces to pop and rock songs.

“I hope to not only preserve the musical saw as an art form but also to push it forward to the point where it’s here to stay,” she says. “I want to introduce it to today’s composers and prove that it has a place in today’s serious music.”