It was a muggy August night when Steven Feigenbaum sent the text message – “I have something that will change your life” — that set everything in motion.

What’s surprising is that Dan Bowen could have Rollerbladed over, but he didn’t. He hopped on his motorcycle. He arrived on Steven’s stoop at 8 p.m. “I’d like you to go across the country with me,” Steven told him. “On Rollerblades.”

As calmly as if he were agreeing to go to the corner deli for a turkey and cheese sandwich, Dan said yes.

The plan was simple: The friends who met at the New York Sports Club in Sunnyside would make a three-month roll from St. Augustine, Fla., to San Diego to raise $1 million for charity. 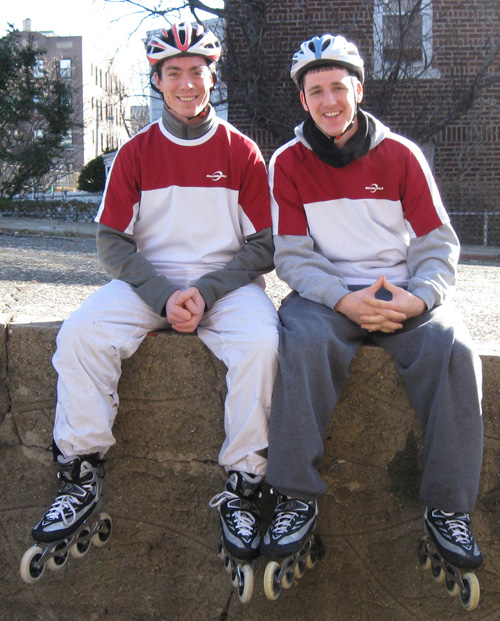 Photo by Nancy A. Ruhling
Dan and Steven are on the move for a good cause.

All Steven and Dan had to do was make it happen, and that’s exactly what has happened. Yesterday, Steven and Dan and another friend, Sandor Sienkiewicz of Manhattan, began their In Motion for a Million to raise money for the Huntington’s Disease Society of America, The Leukemia & Lymphoma Society and Garden of Dreams.

“It’s three athletes, three causes and 3,000 miles,” Steven says. “The million in the name can mean many things. It can be 1 million people to hug, 1 million reasons for hope or 1 million people each giving $1 to raise $1 million for the charities.”

Steven, who returned late last year from a one-year assignment teaching English in South Korea, came up with the idea when he was visiting his cousins in Georgia in 2008. “My aunt had died of Huntington’s disease, and my cousins are at risk,” he says. “I’m a package of energy, and I decided to Rollerblade on a 100-mile trail that went from their house to Alabama. And, bang! It hit me, and I said, ‘I wonder what it would be like to Rollerblade from coast to coast. I’m going to do that.”

Dan is a production assistant for his father, Steve Bowen, who is the president of novelist James Patterson’s entertainment company empire. He also is a marketer for Tahitian Noni Juice. Dan and his father had already spent three months on a cross-country motorcycle trip. “My mom died of Hodgkin’s lymphoma when I was 5,” he says. “This is an awesome way to remember her.”

Sandor, who has an 8-year-old daughter named Sky, chose Garden of Dreams because of its focus on children.

Dan, who grew up in Westchester, and Steven, who was raised in central Jersey, have been avid Rollerbladers since they were around 10 or 12. “As soon as I put on my first pair of blades and didn’t fall down, I was in love,” Steven says. “The world is my rink.”

They have been in rigorous training for this trip. They Rollerbladed and did weight training every day and spent the weekends playing roller hockey. “We have to be physically and psychologically prepared,” Steven says. “We were two very skinny guys who weighed only about 135. We pigged out and each gained about 20 pounds.”

Tall and lanky with dark, closely cropped hair, they still look like two rail-thin kids, and even though they are pushing 30, they have all the enthusiasm and colt-like energy of 16-year-olds. If they hadn’t said otherwise, one would assume they were brothers. Dan plays the showman to Steven’s serious sidekick.

Like choreographers, Dan and Steve have mapped out every roll of the trip. They rise with the sun and Rollerblade through the afternoon. Some cities are farther apart then others, so some days they will cover 20 miles. Other times, they will have to do 70 to keep on their schedule of 40 to 60 per day. “Texas is so big it takes a month!” Steven exclaims.

A friend of Dan’s arranged for them to have a recreational vehicle and a driver. Sandor’s mother, Julie, is their chef and a chief source of support. And a crew of documentary filmmakers is recording their every major roll.

Steven, too, is psyched. “I have no trepidation or doubts about making it,” he says. “There was a 72-year-old man who walked from the Space Needle in Seattle to the Empire State Building. If you flip his age, it’s 27 – my age. And we’ll be Rollerblading, not walking.”

On the last day, they’ll celebrate by jumping into the Pacific, Rollerblades and all.

After that, things are up in the air. Steven has dreams of teaching overseas again. Dan hopes to continue working with Patterson and Noni.

But there’s much time to think of the future. Steven and Dan, blades flashing like lasers, roll off into the sun.

To follow the adventures of Steven, Dan and Sandor, go to the official fan club page:
http://www.facebook.com/home.php#/pages/In-Motion-For-a-Million/119858767522?ref=ts