There are no cupcakes in Michael Cyril Creighton‘s apartment. Something is terribly wrong.

Since July, the world has been watching with delicious delight as Michael stuffs his face with Bakeway cupcakes on Jack in a Box, the comedy series he created for YouTube whose second season starts today.

“I do not like cupcakes; Jack does,” he says emphatically in his stage-perfect diction. “I would prefer a taco. I’m more savory than sweet.”

This is a blow, especially after the workout of the five-floor walk up to his apartment. But Michael – unlike his alter ego Jack – aims to please and repairs the PR disaster with panache. “I do have a croissant for you,” he says, a note of apology in his voice.

It’s a good thing Jack isn’t here. If he had a cupcake or even a croissant, there’s no way he’d share it. Nope, if he knew you wanted it, he’d eat it right in front of you. Then he’d give you a snarky smile and tell you it was the best one he ever had. “I’m a little better than Jack,” Michael says. “Jack has all the hidden bad qualities I have as Michael.” 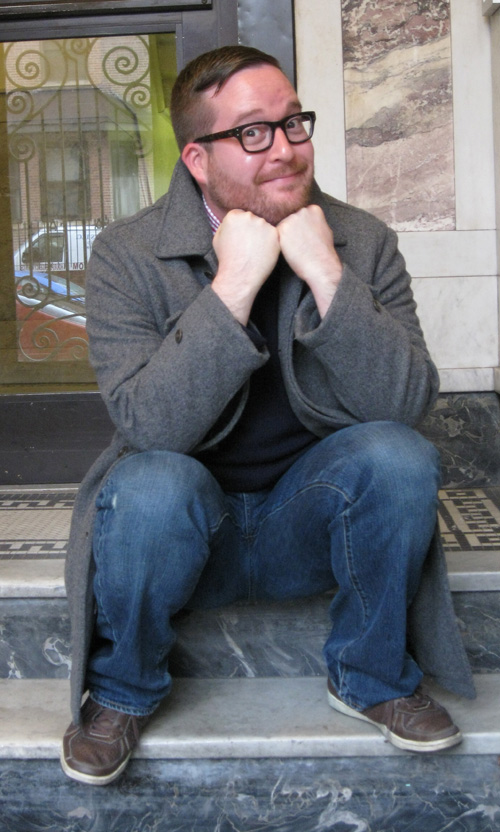 Photo by Nancy A. Ruhling
Michael, aka Jack, the star of Jack in a Box.

Unlike Jack, Michael, whose horn-rimmed glasses style him a young, slender Drew Carey, acts more Shakespeare than sitcom. For Jack, it’s service with a smirk and a smart remark: He puts customers on hold while he eats lunch, grosses-out a co-worker so he can rehearse alone and licks tickets so he can share his strep.

For Michael, the consummate gentleman, it’s service with a smile: He helps guests on with their coats, serves coffee, and even in the rain, walks visitors to the corner in broad daylight. He dresses in Ralph Lauren Polo, and his apartment looks like a spread from the West Elm catalog.

They may disagree on cupcakes, but Michael and Jack do have some key things in common. Aspiring actors/comedians, they each work in a Manhattan theater box office between auditions, and they each have to deal with crazy customers and flaky friends and family. “The ideas for the episodes are sparked by real-life situations,” Michael says. “But the characters are fictional.”

Having said that, Michael adds that Jack’s mother – the one who constantly dials him at work on his cell phone and croons “I Just Called To Say I Love You” — is based on his grandmother. “When she saw the episode, she called me and said, ‘Do you really make those faces while I’m singing?’ Then she started singing another song!”

Jack in a Box debuted right after Michael’s 30th birthday. “I wanted to take ownership of something,” he says. “Unlike Jack, I don’t think that having a full-time day job means you are a failure as an actor. But if I had to do only that, like Jack, I would be very depressed. I’m a character actor, and I need to make my own opportunity, and that’s fine with me. I wrote a script, and the YouTube videos are based on bits of it.”

The first episode was far more popular than Michael – or even Jack – ever dreamed. It has been viewed more than 12,000 times.

The episodes, which are shot in a theater box office in Midtown with a single high-definition camera equipped with one light and one mike, take about two hours to complete. “I start with an image or a character and write down a line here or there,” says Michael, who shows up on the set with a box of croissants, not cupcakes, for the cast and crew. “Then I write each episode in about 20 minutes.”

The cast is culled from Michael’s acting friends and has included well-known New York thespians like Marylouise Burke, who played Miles’ mother in the film Sideways. 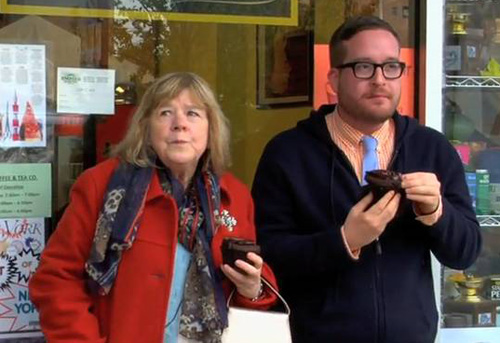 Photo from ‘Jack in a Box’
Jack and his new friend, Marylouise Burke: ‘Let them eat cupcakes.’

“For me, this is a labor of love,” he says. “My main hope is that people find it as humorous as I do.”

Everybody knows all about Jack in a box, but what about Michael out of the box?

Michael grew up in Kings Park, Long Island, and was raised by a single mom, an English teacher who exposed him to language, literature and arts and culture. His grandparents lived next door.

“By the time I was in high school, I knew I wanted to be a performer,” Michael says. “It was then that I starred in my first real play that wasn’t a musical.”

The stage, he finds, suits and seduces him. “When you’re doing a play, there’s an instant collision of friendship that’s like family,” he says. “It’s real quick. Then it’s over. It’s exciting when you keep repeating that fast burst of intensity.”

After he graduated from Emerson College, where he majored in acting, Michael got a job in a box office in Manhattan very much like the one he and Jack work in. After several years of the three-hour round-trip commute, he settled in Astoria, where he has lived for seven years.

Michael is a creative creature of habits. He starts every morning with coffee – skim milk and two Splendas and every once in a while a chocolate croissant — at Bakeway on 30th Avenue, and even though it’s three subway stops away, he gets his closely cropped hair cut every two weeks by Alex at Allan’s III Barber Shop on Ditmars Boulevard.

When Michael’s not Jack or Michael, he’s any number of characters. In September, he was in the critically acclaimed off-off-Broadway production MilkMilkLemonade. Even Jack would not have recognized him: He was the religious elderly grandmother who has cancer and runs a chicken farm. “It was flattering and strange to be asked to do the role,” he says. “It was a stretch – I had 44 DDD breasts made of kitty litter! They were really heavy.”

This month, he’s playing a variety of roles in The Debate Society production You’re Welcome, which he describes as a love letter to bad theatre.

The season one finale of Jack in a Box, which came out in December, ended with a chocolate cupcake of a cliffhanger. Jack, while licking his wounds and his frosting, has a revelation of epic proportions: He wants out of the box.

“I haven’t decided what he’s ultimately going to do,” Michael says.

So it is that Michael will let Jack have the last cupcake, but he’ll save the last laugh for himself.