Amando De Guzman is gazing out the window. His eyes are restless. He’s staring at the people walking on 23rd Avenue, but all he’s seeing is the rubble of Port-Au-Prince.

“In my imagination, I saw bodies in the destroyed buildings,” he says, his voice soft and sad. “I was shocked by the condition of Haiti and all the suffering. It’s much worse than the photos.”

Amando, a registered nurse, is a pro at dealing with emergencies. His is one of the first faces that people see when they come to the emergency room at Mount Sinai Hospital of Queens. The Philippines native gets to know more patients than most of his peers because he speaks Arabic, so his co-workers give him the honor of being interpreter. Everyone remembers the calm, caring man with the black hair, ready smile and nice laugh.

“I talk to people, I touch them, and I make them feel better,” he says. “To be a nurse, you have to have compassion.” 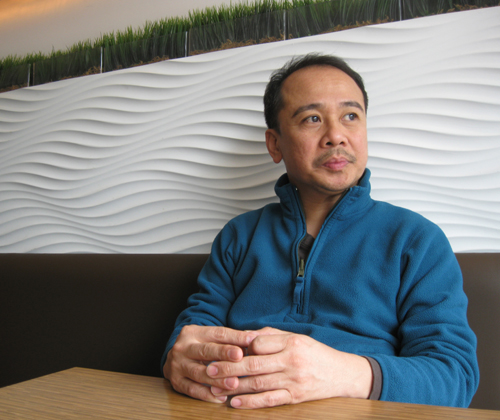 Photo by Nancy A. Ruhling
Amando’s in Astoria, but his mind’s back in Haiti.

For eight days last month, he took his compassion to Haiti, where he joined 26 medical professionals from Manhattan’s Mount Sinai Medical Center in a relief effort. “I considered myself very fortunate to be the only one chosen from the Astoria hospital,” he says. “It was a life-changing experience.”

The team worked in an undamaged wing of National Hospital, where doctors set up an operating room and performed an astounding 12 to 16 surgeries a day. At night, they were transported by bus to a house on a mountain. A generator provided only enough power for lights and ice-cold showers.

“In the beginning, we were packed into two cars like sardines,” Amando says. “When we got the bus, we always got lost because the driver couldn’t find the road in the dark. I never got used to those cold showers.”

No matter how hard he tries, Amando can’t erase from his mind the horrific images of masses of people lining up for food and living on the street. “I’ll always remember the kids,” he says, “because we had to struggle to get them to stay still while we put in the IVs. They were scared; they didn’t speak English, so I would look into their eyes and use sign language and give them a thumbs-up to get them to understand.”

The poverty, too, had a profound impact on him. “My country, the Philippines, is a poor third-world country, but this was worse,” he says. “I kept saying, ‘We’re blessed in the Philippines and in America, thank God, we’re so blessed.'”

Amando’s parents had a rice farm, and Amando was sent to work the fields, standing barefoot in the knee-high water for hours, when he was 6. “There were many times when we didn’t have shoes or clothes or enough to eat,” he says. “When rice wasn’t in season, my father worked at a factory making rattan furniture.”

Although Amando’s parents wanted him to have a career in business, he decided to become a nurse. “I liked the idea of taking care of people and learning about them,” he says. “And I knew it would bring me many opportunities.”

He made sure it did. After working in a general hospital in the Philippines, Amando got bored. So he took a nursing job with Saudi Arabia’s national guard in Riyadh during the Gulf War. “We were on standby,” he says. “We picked up those who were injured in the bombings.”

Then he transferred to a general hospital in Jeddah, and when he got tired of that, he moved on, this time, to New York. His first job was in Amityville, Long Island, as a nurse attendant in a hospital emergency room. Then he worked in a Brooklyn hospital and the Wayne Center For Nursing & Rehabilitation in the Bronx.

Three years, ago, eager for change once again, he came to Mount Sinai. He works 12-hour shifts three times a week; on his days off, he works part-time for the Wayne Center. “My parents taught us to work very hard,” he says.

Up until a year ago, the rest of his family was in the Philippines. Now, his sister, her husband and their 15-year-old son live with him in his one-bedroom condo in Astoria. She’s a nurse in a nursing home, and he’s a home-care aide. “I told them it was not easy here,” Amando says. “I’m glad they are here because I was lonely.”

On the rare occasions when Amando isn’t working, he likes to travel; he has visited Asia and has spent time in Texas, California and Florida. He loves exploring New York City neighborhoods.

“The subway is my life,” he says. “I also like antiques. I can spend hours looking at these objects.”

He hastens to add that the few antiques in his collection are small. “I don’t have much space for them,” he says.

But there’s another reason: He’s been in Astoria three years and he’s been a nurse for a quarter century, so he’s starting to get a little bored again. “I have a five-year plan,” he says. “After that, I may move someplace else. I may even go back to the Philippines and start a business. I don’t know. But for now, I’m happy here.”