“I love the women,” says Angelo Grivokostopoulos. “I want to make all the women in the world beautiful all the time.”

As he says this, he artfully arranges himself like a model on the sleek white leather sofa. He’s wearing a black T-shirt paired with skin-tight jeans, and when he crosses his legs, he displays his black leather cowboy boots to good effect. The ensemble highlights his black hair, which is peppered with just enough silver to make it sexy chic.

Angelo, who styles himself a hair stylist, languidly unzips a leather Louis Vuitton case. It contains 8 X 10 glam fashion shots of beautiful people in ball gowns and wedding dresses. Each has a fabulous Angelo hairstyle. 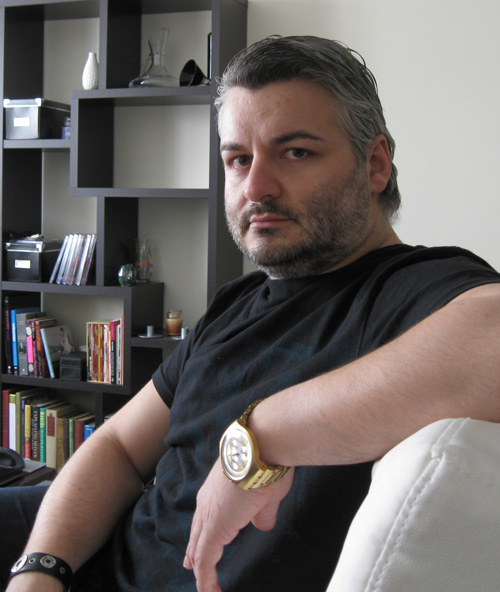 Photo by Nancy A. Ruhling
Angelo has chosen Astoria over Athens.

“All my life I’ve been interested in hairdressing,” he says, flipping through the photos. “I try to make something perfect to fit each woman.”

Angelo, who hails from Greece, knew he was destined to come to New York ever since he was a schoolboy. “I used to watch The Bold and the Beautiful on TV when I was eight and nine,” he says. “I knew I wanted to live here.”

But the journey took him decades. Angelo grew up on an olive farm. The oldest of three children, he felt stifled by the country life, even though Athens was a short car ride away.

“Farmers stay in the same place and do the same thing all the time,” he says. “I didn’t want to do that.”

Although his family was middle class, Angelo began working when he was 12. His first job was in a gas station; later he worked in a café bar. “I wanted to have my own money,” he says.

After high school, he moved to Athens and went to interior design school. “I worked full time in a hair salon, and I loved it,” he says. “At night, I worked in a bar.”

So it was that he came to make hairdressing his profession. For more than a decade, he stayed in Athens, working in a salon and cultivating private clients. In 2008, longing for adventure, he packed his scissors and his ambition and came to New York City.

“I had visited beforehand, for 25 days,” he says. “I had a friend here, and she helped me from the beginning.”

Although he had spent six years studying English, he was unprepared for the transition. “I felt like a zero,” he says, dramatically drawing a circle in the air. “I was nothing in the middle of nowhere, so I had to begin at the beginning.”

Angelo’s Greek came in handy even before he came to Astoria. Shortly after his arrival, he was on the N train speaking via cellphone to his mother, telling her that he had to find a place to live.

“A Greek woman on the train — a stranger — heard me and gave me the names of some people in Manhattan who were looking for roommates,” he says. “They took me in.”

It wasn’t long before he started picking up private clients. In fall 2009, he moved to Astoria. “I wanted to live alone,” he says. “And I wanted to see if I could make it on my own. It’s cheaper in Astoria, and the apartments are bigger.”

The hairdressing profession is different in Greece, and it took Angelo a while to adjust. “We are taught to do everything,” he says. “In America, everyone is a specialist, and a client can see four or five people, including a colorist and hair cutter.” 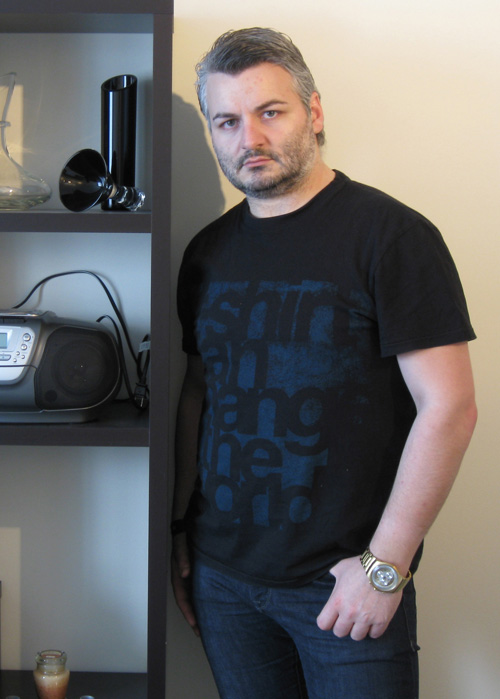 Photo by Nancy A. Ruhling
Angelo has dreams of Hollywood hair styling

Twice a year, he makes time to go home to Greece. He stays for a month each visit. “I don’t call my mother every day,” he says, guilt shading his grey-green eyes. “But I do consult her frequently, about every three to four days.”

Although Angelo has made many sacrifices, he wouldn’t want to live anywhere else but New York City. “I have less than I had in Greece,” he says. “But I love it here. If you take the same street every day, you can see different things every single time.”

For now, hairdressing is OK, but Angelo has bigger ideas. He’s not sure whether he’d ever want to own his own salon, but he does have his eyes on Hollywood.

“I love fashion, I love magazines,” he says. “I’d like to be a stylist for the stars. That’s my dream. I know I can make it.”