Alfred C. Ronzoni Jr. arrives at the Greater Astoria Historical Society right on the dot. He puts his black backpack on the floor and places his paper cup of Lipton tea on the Formica folding table.

Everyone is in jeans and sweats. The 45-year-old Al, a barrel-chested bull who looks as though he pumps iron every spare second, is wearing a dress shirt and tie.

Al — “I’ve always gone by Al” — is the society’s treasurer, and he’s come to the office to work on a lecture. He conducts the history roundtables and book discussion groups.

“This is why I love it here,” he says as he takes a vintage book off a shelf of the voluminous library. 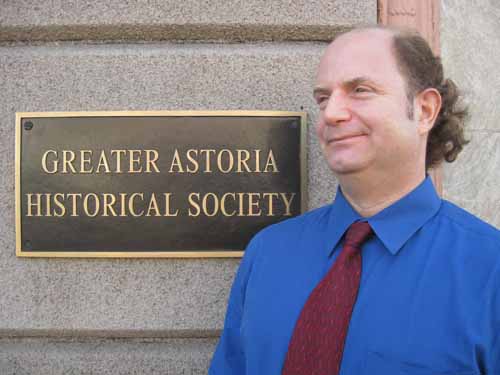 Photo by Nancy A. Ruhling
Al, the historical society’s treasurer, is a student of history.

Ever since childhood, Al has been interested in history, which is probably a good thing because his family is steeped in it. Al, in case you didn’t figure it out, is one of the pasta-making Ronzonis. It was his great-grandfather, Emanuele Ronzoni of San Fruttuoso, Italy, who founded the company in 1915 and opened its first plant on 35th Street and Northern Boulevard.

As the decades went by, Ronzoni became a big family company — sons, daughters, aunts, uncles and cousins all worked there, and two pasta plants were opened in Long Island City. “My father, Alfred Sr., was the vice president of production,” Ronzoni says. “His father, Angelo, had the same job; so did his dad’s dad, Emanuele.”

Al, the oldest of four, grew up in Manhasset, the part of Long Island’s Gold Coast that is home to the Miracle Mile shopping mall. “We lived a middle-class life,” Al says. “We had a ranch house, and I couldn’t have everything I wanted.”

He wasn’t exactly famous, but everyone knew who he was. “Every time I would go to a friend’s house, the mother would open the kitchen cabinet and pull out a box of Ronzoni,” he says. “And the kids all called me Pasta Boy and Ronzoni Noodles.”

It goes without saying that pasta was prominent on the Ronzoni family’s table. “We didn’t have it every day, but we did have it every Sunday,” Al says. “That’s when we went to my mother’s parents’ house in Elmhurst. It was a small apartment, and it was packed with family. I have fond memories of kids playing and fighting and everyone shouting.”

For the record, Al does eat pasta, not necessarily Ronzoni, usually on Sundays, just as he did when the family was spreading sauce together. “I’m pretty much into wheat pasta,” he says. “The Sunday pasta, that’s a holdover from my memories of my grandmother’s house.”

It seemed that Al was destined to enter the family business. He worked at the plant during the summers when he was in high school. 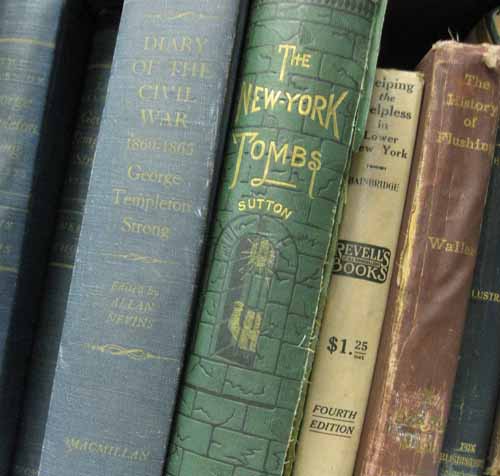 Photo by Nancy A. Ruhling
Al loves to comb through the society’s vintage volumes.

In 1984, however, the family sold the company to General Foods, which was pretty much alright with Al. “I had mixed feelings,” he says. “It might have been nice to build it into something bigger, but this left me free to move into other areas that I was interested in. I didn’t know if factory work was what I wanted to do. I was very interested in history and creative writing.”

The sale left Al’s family if not rich at least comfortable. “There were so many family members in the company that the money each got wasn’t that much,” he says. “We got a bigger house as my two younger brothers and sister were getting older, but it was in the same neighborhood. My parents did have enough to pay for my college.”

After Al graduated with a bachelor’s degree in history from Boston College, he earned a master’s in history from the C.W. Post Campus of Long Island University. “But I ended up in financial services,” he says. “I fell into it.”

He worked for several companies, eventually moving to Astoria in 1997. His apartment, at Crescent Street and Broadway, is a wooden spoon’s throw from 50-02 Northern Blvd., where the Ronzoni plant was from 1950 to 1998, when it’s then-owner, Hershey Corp., vacated it. Later, it was razed and became the home of a Home Depot. The other plant, near the 59th Street Bridge, still stands but no longer is in the pasta business.

“I didn’t realize at first that I was so close to the Northern Boulevard plant,” he says. “I’ve since found out that when Ronzoni built the plant, Madison Square Garden Bowl, a famous open-air arena, was torn down.”

Shortly after settling in in Astoria, Al got hooked on the historical society. “When I was a little boy, my parents bought me a history book, and it fascinated me,” he says. “I still have the same enthusiasm for the subject, and the society fits right in.” 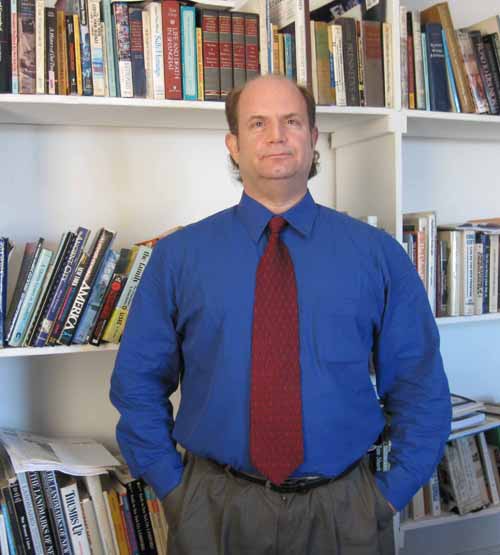 Photo by Nancy A. Ruhling
Ever since childhood, Al has been taken by times gone by.

Since that time, he’s worked up a lecture on the Ronzonis, which he has delivered to several groups in the metro area, and the society has a permanent Ronzoni exhibit that includes vintage photos and the shining steel R from the outside of the Long Island City plant.

Al, who is between jobs, is thinking of a career change. “My heart’s not in finance,” he says. “It’s here, in history.”

He might go back to school to get a doctorate so he can teach college. He’s been writing a lot in the last year — he has a monthly column in the Western Queens Gazette, and he’s a contributor to the Conducive Chronicle, which focuses on social issues.

“The historical society is a good home base for me,” he says. “It’s got all the old newspapers, books, maps and atlases I need.”

Of course, he could do the obvious and write a history of the Ronzoni family. “No one has done it yet,” he says. “I’d need to do a lot more research.”