It’s on the top floor. To get there, you must pass through a spiral of boring hallways whose numbing palette is grey upon grey upon grey.

The door to the dollhouse of an apartment opens straight into the cubby of a kitchen, whose table is spread with crystal, silverplate platters and a pretty pink and yellow chintzware tea set edged in gold.

There’s a sleeping area off to the side, and the bed’s done up in frilly bridal white. Straight ahead, in the living room, where the flat-screen TV is tuned to toons, the sponged-gold walls are filled with unframed old masters ranging from Rembrandts to Rubenses.

Mikele Arapi is sitting on the contemporary black leather sofa sipping coffee out of a china cup in this unexpected gallery, the elaborate valances of the window drapery framing his head like a halo. 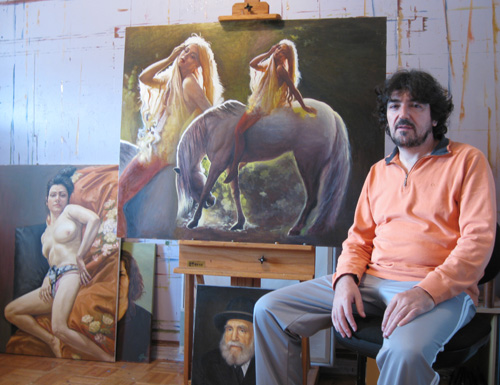 Photo by Nancy A. Ruhling
Mikele’s own work has been influenced by the masters.

Mikele, who has long, tapered fingers and dark Christ-like curls, is an artist. It is he who painted the copies of all these classics in the room in his apartment he calls his studio. “Rembrandt is my favorite,” he says. “The details of his paintings are perfect — the faces, the movement of the bodies.”

He stares at the painting over the sofa, enraptured anew by its beauty. He says he’s not good at expressing himself in words; English is his third language, and he’s used to letting his paintings speak for him.

Aside from all the copies, there are his own compositions, which were inspired by the classics. “I like to work with symbolism,” he says. 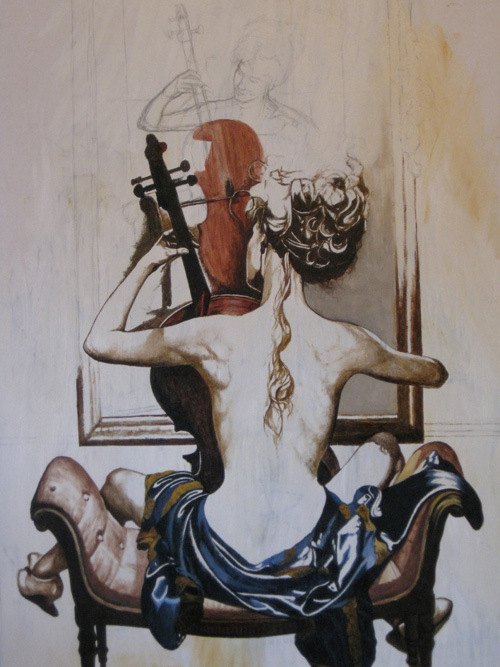 Photo by Nancy A. Ruhling
One of Mikele’s works in progress.

He brings a painting in from his studio and studies it. It’s a white-clad couple hugging in the middle of a lake, surrounded by swans. It is, of course, a depiction of endless true love. “I always knew, since age three, that I wanted to be an artist,” he says. “I used to sketch every object I saw and copied the pictures that were in my schoolbooks.”

Mikele grew up in Korce, Albania, a second-tier city that he likens to Boston. He is the oldest of five children. “We were very poor,” he says. “When I was a boy, I used to work every summer.”

At 13, he was among a few high-achieving students selected to attend high school in Triana, the capital city, where he also boarded. After graduation, he was accepted to the Albania Art Institute in that same city. It was there that he earned his degree and became an art teacher.

“I learned to copy paintings in school, and I continued to do this while I was teaching because I wanted to perfect my technique while I was creating a body of my own work,” he says. 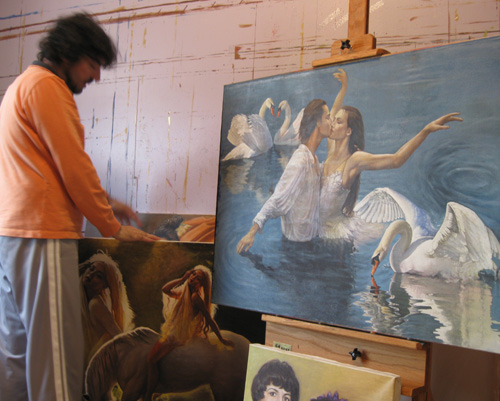 Photo by Nancy A. Ruhling
Mikele is working religiously to create enough work for an exhibit.

After two years, in 1992, he got the age-old artist’s wanderlust and decided to live in Greece. “I had never seen another country, and teaching wasn’t paying well,” he says. “I chose Greece because I knew friends there.”

He got a job in an Athens art gallery, which allowed him time to pursue his own work, too. Three years later, he ended up painting icons for a church in Thessaloniki. “I painted them straight on the wall while on a scaffold,” he says. “I also was doing my own work but every time I finished a painting, somebody bought it, so I never got enough to do a show.”

Although Mikele hated to leave Greece — “it was a beautiful place” — he and his wife, Ornela, won an immigration lottery and jumped at the chance to come to Astoria.

“We came here because we knew that many people from Greece are here, and we speak Greek,” he says. “We didn’t know any English when we came here. We tried to take lessons, but it was too hard.”

Mikele has been making his living painting icons for Greek Orthodox churches in Brooklyn and Queens, including Astoria’s St. Irene Chrysovalantou. “This is all I know how to do,” he says. “My hands know only how to hold a spoon and a brush.” 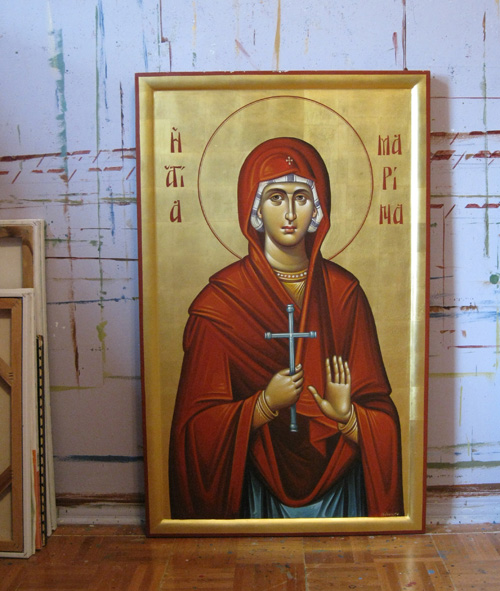 Photo by Nancy A. Ruhling
Mikele got his art start painting church icons.

The transition to American life has not been without its ups and downs. “It’s been hard for us to make friends,” he says. “We work hard all the time, and we don’t know many people who speak English, so it’s hard for us to practice it.”

Mikele longs to give up the church work so he can spend every minute creating his own paintings.

Fifteen. That’s the magic number he hopes will change his life. That’s how many paintings he has to complete to have a show of his own.

“I don’t know how long it will take me to produce enough paintings for an exhibition,” Mikele says. “It could take me a year, it could take me three years or five years. But I’ll do it.”