One thing has to be perfectly clear at the start: Joan Murphy doesn’t have much to say. So she’s set the kitchen table for tea. And she’s made some of her banana nut bread so things won’t be a total loss.

Joan, a stoic, sensible woman with Wonder Bread-white hair, fiery blue eyes and a throaty Midwestern accent that’s as broad as a wheat field, isn’t used to sitting, but she can stand sitting in the wingback chair for this short stretch. Heck, she’ll even go out all and prop her feet on the ottoman.

A lot of things have happened to her in her 84 years, but Joan sums them up tidily: “FATE,” she declares, “has always played a big part in my life. And I’ve been though everything you can imagine. Nothing shocks me.” 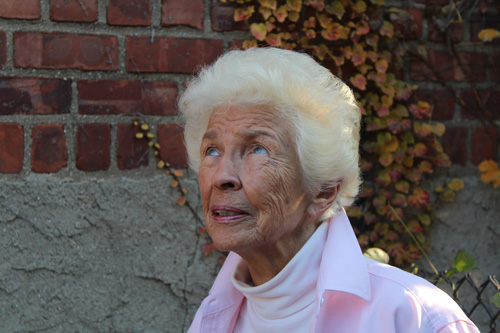 Photo by Nancy A. Ruhling
Joan came to Astoria from Indiana after she retired.

Joan isn’t her legal name. When she was born in Rockford, Ill., her mother christened her Betty but called her Joanne, which she wrote out as Joan.

“She was a little confused about spellings,” Joan says.

In 1931, when she was 3, her parents moved to Greenfield, Ind., to open a movie theater during the dark days of the Great Depression.

“I’m the same age as Shirley Temple,” Joan says. “And when I was a little girl, my hair was the same as hers.” 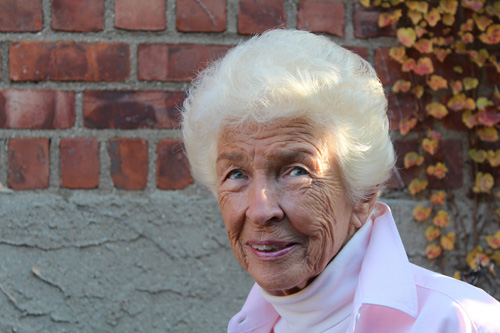 Photo by Nancy A. Ruhling
Joan’s seen it all and done it all.

So it was that the tiny town — at last count, the population didn’t top 15,000 — that was home to the Eli Lilly pharmaceutical company and James Whitcomb Riley, aka “The Hoosier Poet,” added Joan to its family.

“What you’re hearing from me is only a pea in the pot,” she says, jumping up to stretch her legs.

Joan didn’t much like high school and didn’t bother to go through the graduation ceremony. Nope, she didn’t ever think of enrolling in college. She got a “helluva job” at Eli Lilly, working in the filing department and subbing for the receptionist. 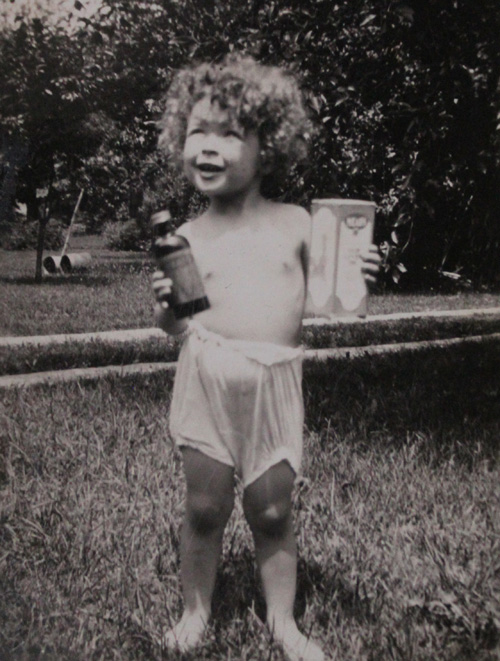 Photo by Nancy A. Ruhling
At 3, Joan looked like Shirley Temple’s twin.

It was at this time that she met her first husband. Bob Bateman was a seller of heavy equipment, and he had a good 10 years on Joan. She’s not really sure what the attraction was but says that “he had beautiful white teeth, and we had common interests — he liked to swim.”

They moved to Fort Wayne and spent weekends in Greenfield, tapping his clients between the cities on the back-and-forth trips.

“Bob didn’t want me to work, and he didn’t want children,” Joan says. “I spent my free time learning how to cook. Would you like a piece of banana nut bread?”

After a couple of years, Joan got “dissatisfied with the whole ball of wax,” and divorced him, a move that set the small-town tongues wagging and got her excommunicated from the Roman Catholic Church. Not that any of this bothered her one bit. 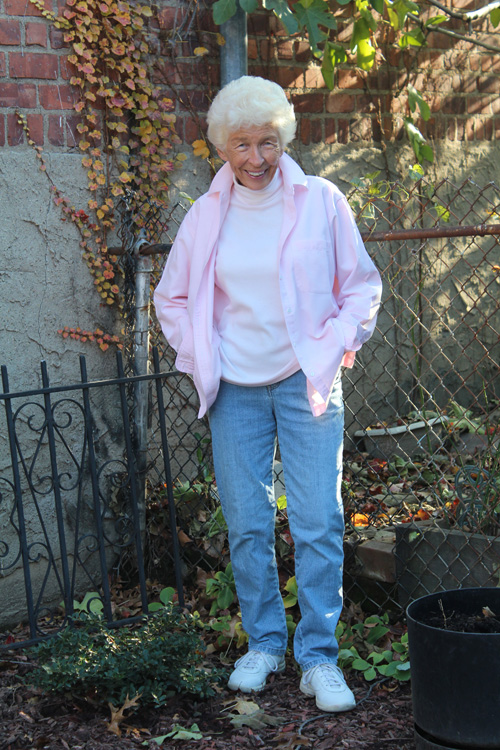 Photo by Nancy A. Ruhling
One thing you can say about Joan: She’s not a sitter.

She thought about going back to Eli Lilly, but the new job that was offered required her to sit all the time.

“I knew I couldn’t do it,” she says, jumping out of her chair again.

But FATE stepped in and gave her a whole new life. It started out innocently enough. She had gone to a nightclub in Indianapolis with a girlfriend, and when they were leaving, the owner offered her a drink and eventually a job.

“He was a man about town and he was married and his wife was pregnant, but at the time, I didn’t know it,” Joan says, adding that she later found out that he had many mistresses. “I guess we had an affair, but I didn’t fall head over heels. I’m a little free bird.” 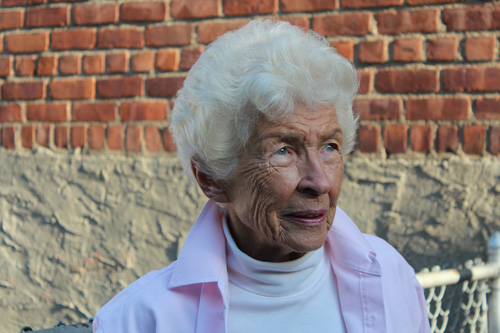 Photo by Nancy A. Ruhling
Joan thrives on adventure.

Suffice it to say that sparks flew and things happened; you’re likely to be scandalized if you know all the details.

Joan’s beau liked to race sports cars, and she took up the hobby. She got a Jaguar Roadster and one of the first Corvettes to roll off the line. (In case you’re wondering, Joan paid for them herself.)

Never mind that white-gloved ladies back then didn’t do these things. When Joan sets her mind to something, she’s a bulldozer.

“I came in third in my first race,” she says. “We were flabbergasted. You don’t get money, you just get trophies, and I won a few.” 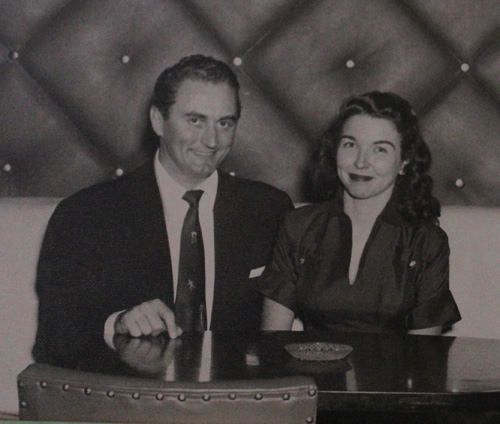 Photo by Nancy A. Ruhling
Joan and Jack in 1954 at his Indianapolis nightclub.

Joan’s mystery man entered Mexico’s Carrera Panamericana, the world’s most dangerous race, and Joan drove there with him. She carried his gun across the border in a Kleenex box.

“I think it was a German luger,” she says.

Speaking of cars, which Joan does a lot, there’s a tame lipstick-red 1994 Ford Tempo in her driveway that’s logged 169,000 miles. Joan’s still a fast but careful driver who thinks nothing of making the 600-mile trek to Indianapolis solo. She almost got a speeding ticket once, but that was lifetimes ago. You’re not going to believe this (or maybe you will): She sweet talked her way out of it.

About her guy, if you must know, his name was Jack. It probably won’t hurt to tell you because he died some four decades ago, but please don’t press Joan for more. There are other people in this triple triangle who might not want the tale told. 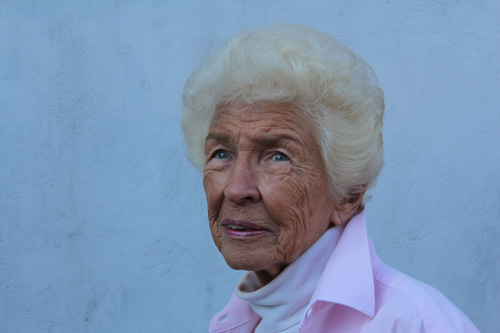 Photo by Nancy A. Ruhling
Joan worked in a gas station and did duty as a mailman.

“I guess you could say he was the love of my life,” she admits. “He brought out my personality that had been left beside the roadside.”

Joan continued to work in Jack’s various businesses, but by this time there was another man in her life. John Murphy had admired Joan since they were in high school, and when he was in seventh grade, he vowed to make her his wife. At that time, she saw him as “a real pest.”

After several dates, “I don’t know how it happened, but he plunked an engagement ring on my finger,” Joan says. “As I was driving to the wedding, I said, ‘If I’m not supposed to go, God, strike this car with lightning.'”

She made it to the justice of the peace in one piece and subsequently had a daughter then two sons. John owned a gas station, and Joan became a stay-at-home mother, who sometimes filled in at the filling station.

After a short stint as a substitute mailman on the town’s longest route, Joan went to work pumping gas full time. 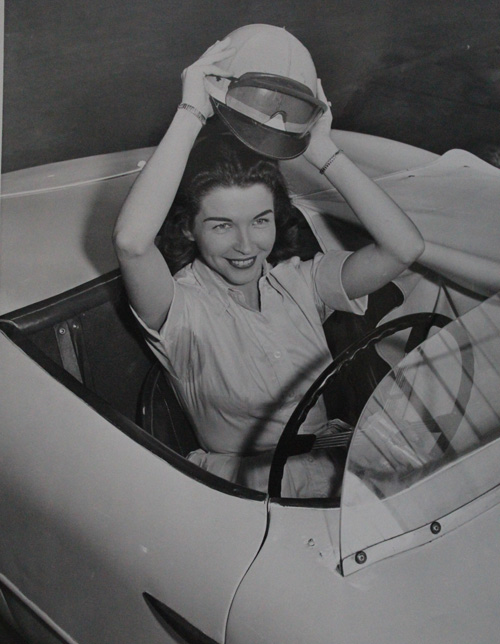 Photo by Nancy A. Ruhling
Joan in 1957 in her racecar days. The car’s a Cadillac Allard.

The marriage had its ups and downs. John was a gambler, and the wins and losses were tallied on his racing forms. Eventually, they had to sell their house to pay off his debts.

Then FATE entered again: A truck John was repairing fell on him, and Joan took over the management of the station while he started a career as a car salesman.

With the children grown and the business on its feet, life was starting to be good again. Then their older son killed himself shortly before his 21st birthday. Joan found his body in the yard of the empty house next door. She didn’t see the shotgun; the detectives told her it was there. 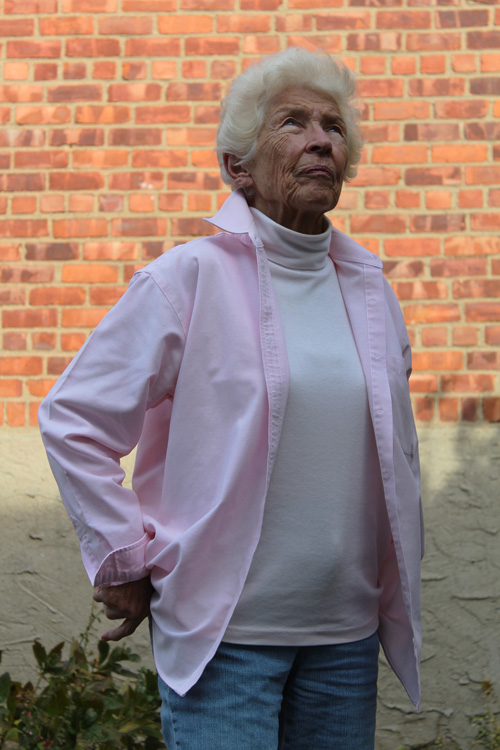 Photo by Nancy A. Ruhling
Joan devotes her time to her daughter and grandson.

When John died in 1997, Joan continued to work, retiring in 2000 at age 72. A couple of days before 9/11, she moved to Astoria to be close to her daughter and grandson. She helps them out a lot, especially since her son-in-law died last year. And she’s proud to be the oldest volunteer at P.S. 122.

OK, this all sounds pretty tame for such a racy dame, but Joan’s no hot-house orchid. If push comes to shove, she still would pull a Conestoga wagon to Oregon and back just for the pure adventure of it.

My word, Joan sure has talked a lot for a woman who doesn’t have much to say. After four hours, she’s starting to get hoarse, but she doesn’t let that stop her.

After she became a widow, she had a couple of flames. She managed to put them out, but that’s a whole other story.

The move to Astoria did get rid of her last suitor, thank goodness. Going half way across the country was such a graceful way to say so long.

“I don’t want to put up with any man any more,” she says. “I’ve had three different kinds; nobody can match what I’ve had.”

She puts another piece of banana nut bread on her plate. It was Jack’s favorite.