It’s breakfast time, and John Sung Park is at the front door with a big grin on his face.

He’s been up since 4, and he still has a lifetime to go before he closes his juice bar, Paris Health New Direction, at 7 p.m. 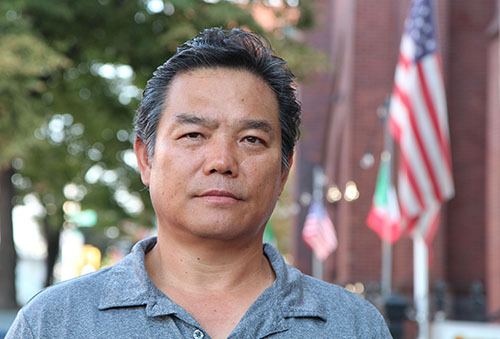 Photo by Nancy A. Ruhling
John’s from Seoul, South Korea.

Early rising aside, Paris — and John — have always been ahead of the times. Paris, which started out as a doughnut shop nearly three decades ago, swapped the sweets for healthy treats 14 years ago.

“Nobody else was doing this here,” he says.

He points to the ceiling. The acoustic tiles are painted the color of spring grass. 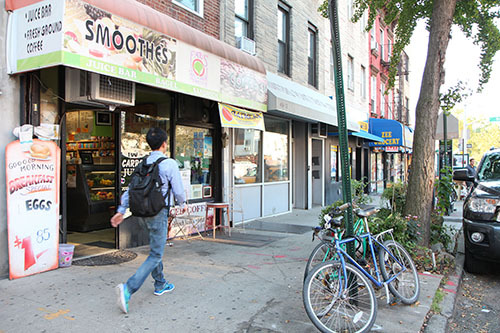 Photo by Nancy A. Ruhling
Paris Health New Direction is at 49-11 Vernon Blvd.

John, who had greying hair and the enthusiasm of a college student, opened Paris three years after he left Seoul, South Korea, where he was born and raised.

His father had died and his mother decided to move the family to New York, where other relatives lived.

John was doing duty in the army, and when his mandatory three-year hitch was up, he followed them. 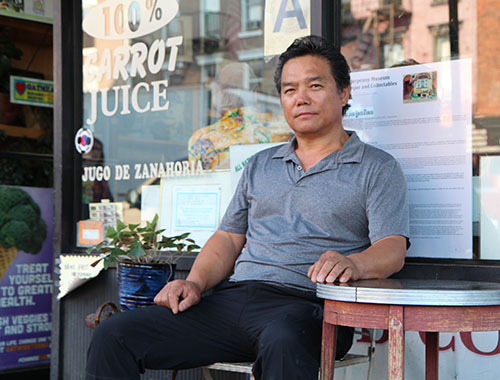 Photo by Nancy A. Ruhling
John opened Paris in 1988.

“I didn’t know any English,” he says. “I remember standing in a long line to get Kentucky Fried Chicken. When it came time to order, I could not tell them what I wanted, so I went to the end of the line. I did this three times. Then I pointed to items and kept saying ‘yes’ to everything they asked me.”

For a short time, John worked in a vegetable store in Brooklyn.

When his uncle opened a Dunkin’ Donuts in Freeport, New York, John joined him. Later, he ran his uncle’s second store in Astoria. 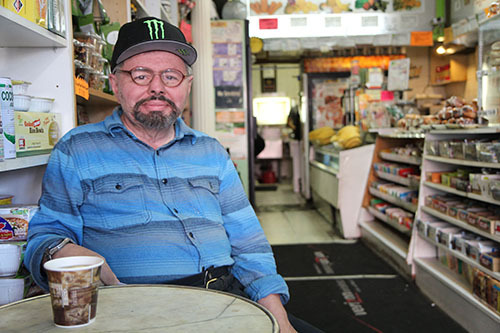 He has fond memories of that store for that is where he met his wife, Vena, who is from Tyre, Lebanon.

“She fell in love with me first,” he says. “We must have done something right because we have been married for 29 years.” 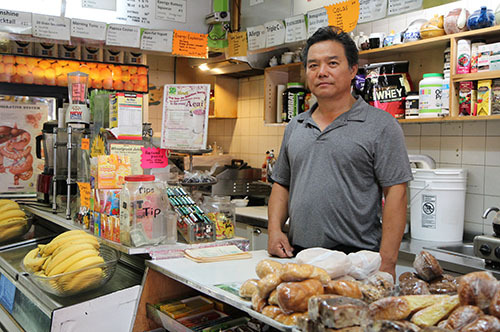 Photo by Nancy A. Ruhling
Paris sells 50 kinds of juices and 15 flavors of smoothies.

“I had this idea to become a multimillionaire,” he says. “I wanted to open satellite stores and sell wholesale to the city.” 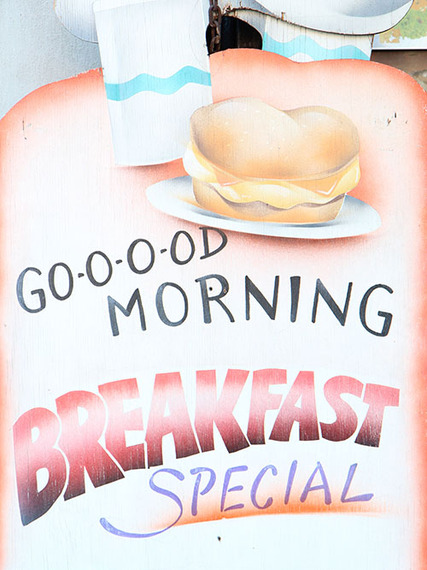 Photo by Nancy A. Ruhling
Welcome to Paris!

That never happened, and John could not be happier.

“In my mind, I’ve been a millionaire a long time because money doesn’t mean anything to me,” he says. “Health is more important.”

Paris, which is on Vernon Boulevard in the shade of a gingko tree, may have continued being a pedestrian pastry place had it not been for 9/11. 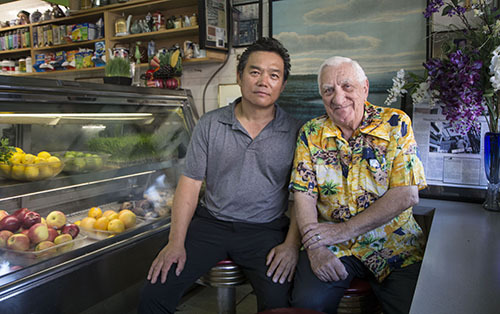 Photo by Nancy A. Ruhling
John with pal Frank Carrado.

“It was getting hard to get deliveries,” John says, “so I started offering carrot juice.”

Today, Paris, which still sells some pastries, offers 50 varieties of juice, ranging from Green Power to Berry Blast, and 15 flavors of yogurt smoothies. 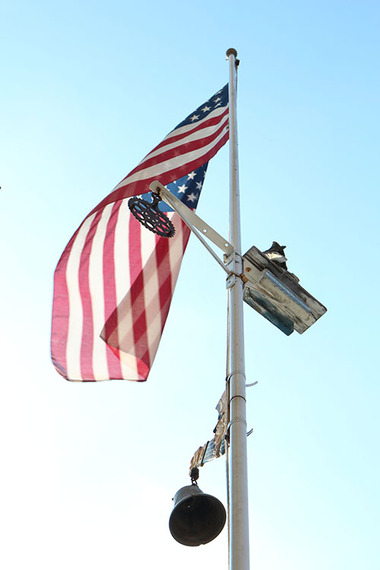 Photo by Nancy A. Ruhling
A flag waves over Underpenny.

The place is always packed because it’s the size of a juice glass. Aside from four stools at the front window, it has one tiny table that’s barely big enough for a pair of chairs.

The healthy snacks (care for some veggie straws?) are stocked in floor-to-ceiling shelves and share space with a variety of vases and vintage teapots.

Funny you should notice these. They are the overflow from John’s other business, the Underpenny Plane & Cast Iron L.I.C. Museum/antiques shop around the corner. 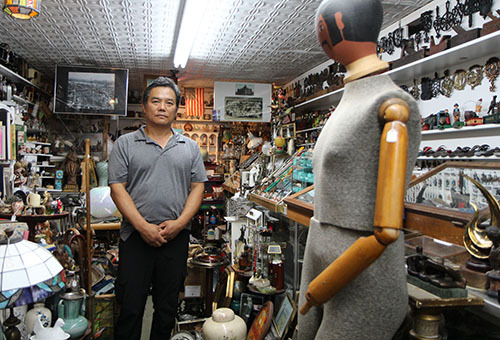 Photo by Nancy A. Ruhling
Underpenny is a museum and antiques shop.

John started collecting antiques about 20 years ago, and the museum/shop is his way to share his collection — and keep his Maspeth home from becoming a storage unit.

Even if you’re really skinny and careful, it’s hard to walk down its single aisle without bumping into a gilded picture frame or a mannequin while you’re distracted by John’s collections of jewelry, Bakelite radios, duck decoys, sunglasses, pottery, child-size sewing machines, hand-blown glass trinkets and other miscellaneous items like the firefighter’s helmet and leaded-glass lamp shades. 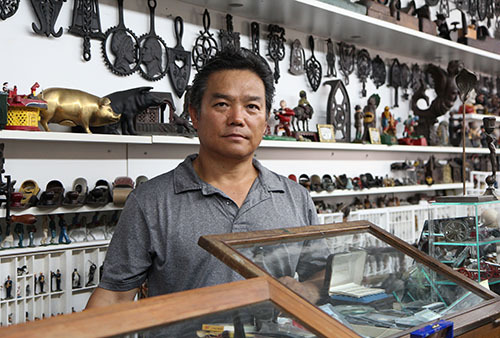 Photo by Nancy A. Ruhling
John’s cast-iron collection started with a trivet.

As for the cast iron and planes, they are displayed on one wall like art. Long ago, John lost track of how many he has, but he’s pretty sure that the trivets alone number 1,000.

“The cast-iron pieces are heavy, deep and dark,” he says. “They are attractive to me because they were made by humans.”

John’s antiques collecting came about by accident. His other passion is fishing, which is why he found himself on the North Fork of Long Island on a day that was too windy to cast a line into the water.

He wandered into an antiques shop, and after his first trivet, he was hooked. 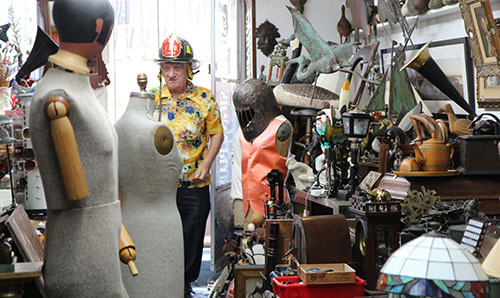 Photo by Nancy A. Ruhling
Underpenny sells everything antique and collectible.

When he’s not manning the shops, John is on the road antiquing. Generally, he goes to Long Island estate sales, but sometimes he heads upstate or even to adjoining states.

You have to be early to find the good stuff, so John gets into the car at 2 a.m. By noon, he’s finished and back at Paris.

“I have a little daytime dream,” he says. “I want to make the museum bigger so I can share it with others. I want them to enjoy it as much as I do.” 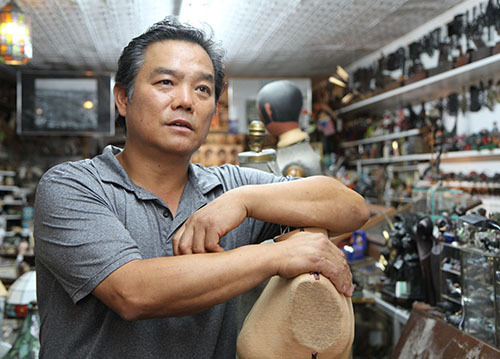 Photo by Nancy A. Ruhling
John has big plans for his museum.

Retire? Sure, John, who is 55, could do it now. His son, Noel, just graduated from LIU Post with a master’s degree in hospital management.

“I’m really tired,” he says. “But I love my customers. As long as they come, I will stay.”

A cool guy in shades and shorts, juice in hand, shouts out “this is amazing” to John as he walks out Paris’ door.