The guy behind the desk gets up to answer the phone. In the blink of an eye, he’s back. 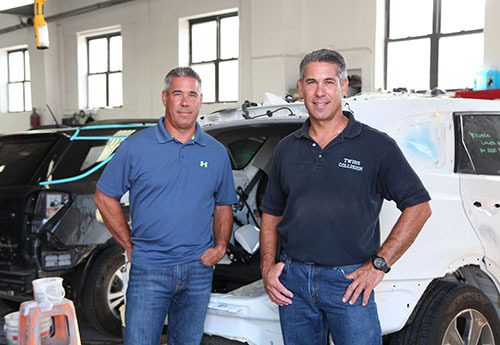 Photo by Nancy A. Ruhling
Richard, left, and Manny are identical twins.

But wait a second. He’s wearing a black shirt. When he left, it was blue. How did he do that?

The unintended joke’s on you: He’s not one but two. Manny Varela Jr., the black shirt, and Richard Varela, the blue shirt, are identical twins. 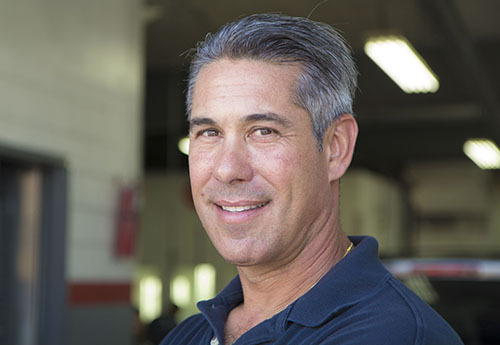 Photo by Nancy A. Ruhling
Manny’s the older — by 5 minutes.

Manny is quick to point out, unprompted, that he’s the older — by a whopping five minutes.

People have been mistaking them for each other ever since they were born in Astoria on July 17, 1972. 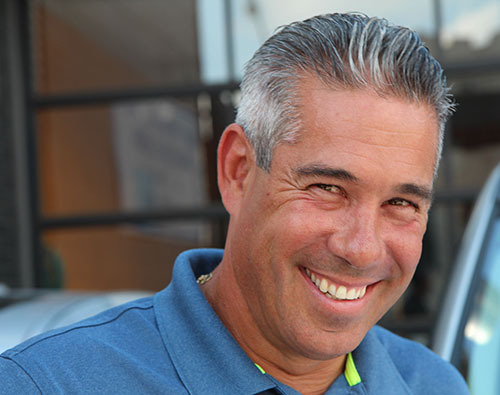 Photo by Nancy A. Ruhling
Richard: We are not alike.

They get that people get confused, but they don’t see it. 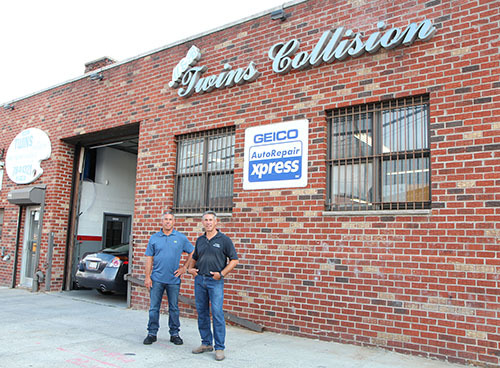 Photo by Nancy A. Ruhling
Twins Collision at 37th Avenue and 22nd Street.

“We are not interchangeable parts,” agrees Richard (or is it Manny?) “All you have to do is look at the back of our heads to see it.”

Try that, and you’ll do a rubberneck double take that would cause you to have an accident if you were driving a car. 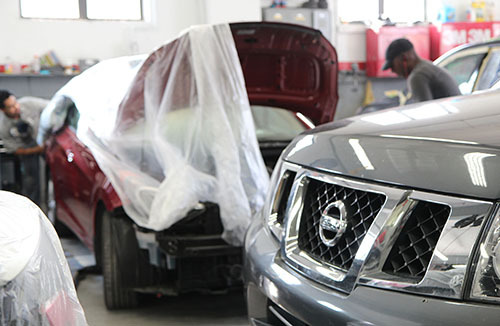 Photo by Nancy A. Ruhling
Twins fixes 40 cars a week.

If that happened, it would be most convenient because Manny and Richard are the owners of the fix-it shop Twins Collision.

The shop was started by their father, Manny Sr., an immigrant from Galicia, Spain, the year before Manny and Richard came into the world together. 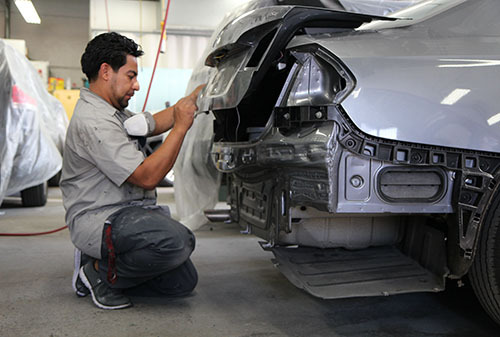 Photo by Nancy A. Ruhling
Willy Castro works on a wreck.

After he settled in New York, he went back to Galicia to find a bride and brought her here.

(For the record, Manny and Richard have an older sister and a younger brother. Neither works for Twins Collision.)

Before the sons got involved, it was called M & B for Manny and his partner, Benny, who left after the first five months. 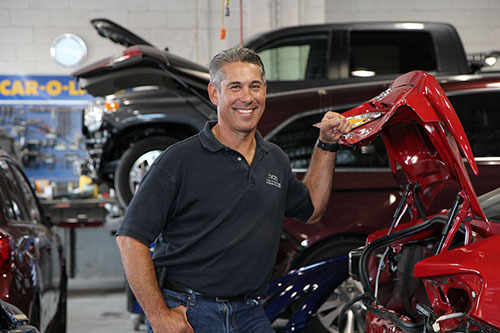 Photo by Nancy A. Ruhling
Manny heads the body shop.

The twins — OK, they would rather you call them Manny and Richard because, after all, they are different people who lead very different lives — got interested in cars early and began helping out at M & B when they were 13.

“We always knew we wanted to do this,” they say together. 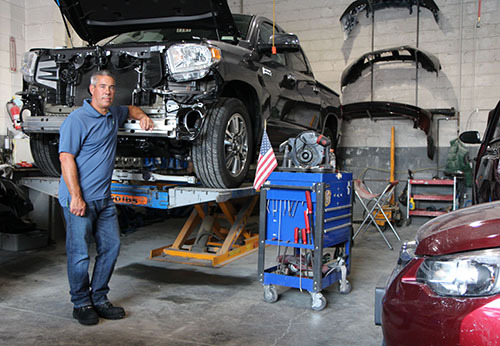 Photo by Nancy A. Ruhling
Richard says he and Manny always loved working on cars.

When it came time for college, they went to SUNY Farmingdale to study automotive engineering, volunteering that at the time only a two-year degree was offered.

They immediately joined M & B as employees Nos. 4 and 5. Richard did the painting, and Manny handled the bodywork. 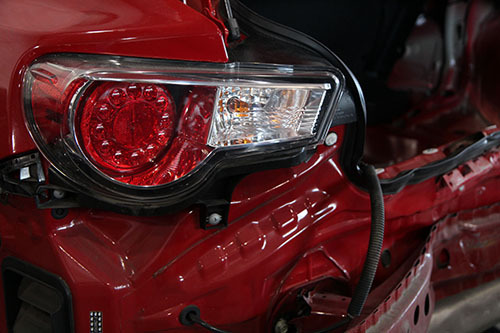 Photo by Nancy A. Ruhling
A car awaiting surgery.

When they took over in 1999, they added Twins Collision to the name.

Richard and Manny don’t think it’s unusual that they are working the family business together. 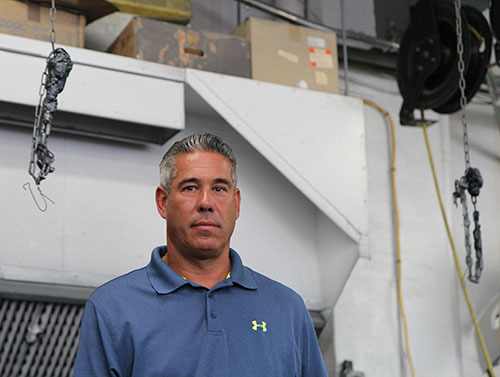 Photo by Nancy A. Ruhling
Richard says Twins will expand in Astoria.

They pretty much like the same things — they are avid deep-sea fishers, for instance — and didn’t begin spending time apart until they married.

And they almost did that together: Manny took his vows first, and the next year, Richard tied the knot.

Their wives are not twins and can vouch for the fact that their husbands are, most decidedly, not identical. 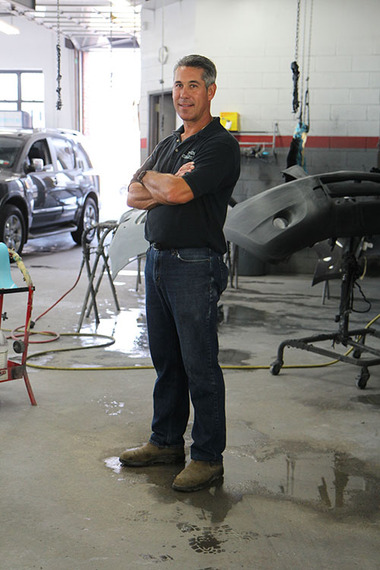 “We lived with our parents until then,” says Manny. “But we work together 12 hours a day, so it’s not like we don’t see each other all the time.”

Besides which, they live close enough to each other in Manhasset to carpool. 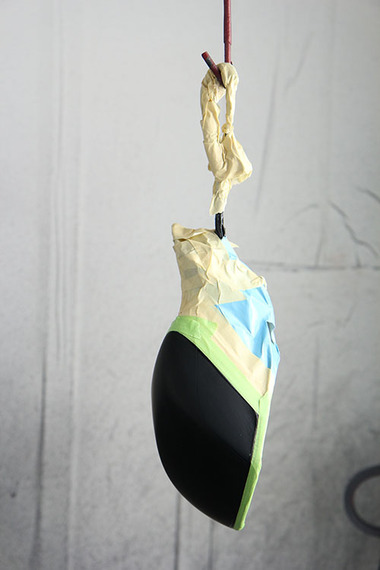 Photo by Nancy A. Ruhling
A side-view mirror gets a makeover.

Richard drives into the shop in a 2008 Ford pickup truck, and Manny arrives in a 2010 Chevy Suburban. But the cars are the same color — black.

At Twins Collision, Richard is the one who works the office, and Manny manages the body shop. 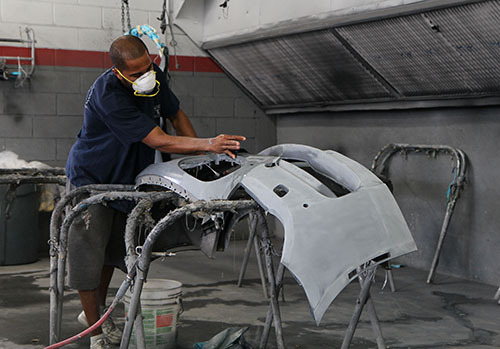 Except when they switch roles, which is often enough to fool even longtime customers.

“About 20 times a day, people comment about us being twins and think it’s really funny to say they are seeing double,” Manny says.

“The twins joke is getting old,” Richard and Manny say simultaneously. 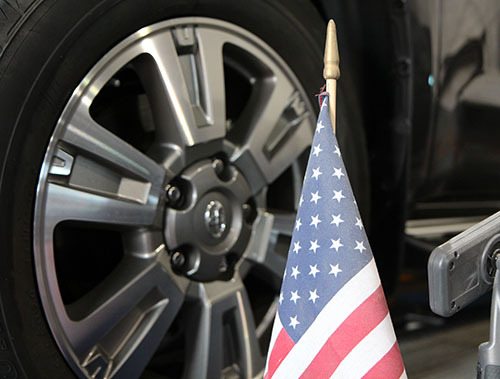 Photo by Nancy A. Ruhling
Cars and the red, white and blue.

But the success of their business is no mere punch line.

Under their leadership, Twins Collision has grown to encompass four buildings on 37th Avenue at and around 22nd Street and 28 employees who do surgery on some 40 cracked-up cars each week.

“We are the most up to date shop in terms of equipment in the metro area,” Manny says proudly. “And we have customers who come from all five of the boroughs.” 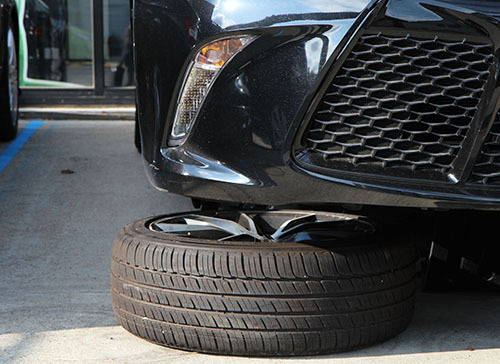 Photo by Nancy A. Ruhling
Will someone call me a cab?

Richard adds that they will keep Twins where it is, simply buying more property in the neighborhood. 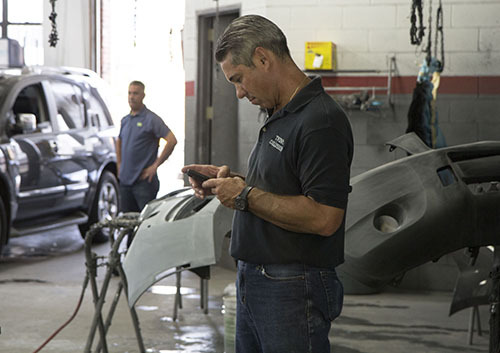 Photo by Nancy A. Ruhling
Richard and Manny hope their children want to take over.

They see Twins Collision as their legacy and are encouraging their children to take over when the time comes. Richard has a 6-year-old son. Manny’s daughter is 14, and his son is 10.

“We have proved that it’s not the worst thing in the world to work with your hands,” Richard says.

Manny adds that “it’s an opportunity to make a good living.”

A customer comes in, sees them together and stares open-mouthed.