There was a pole and a pulley at the end of my driveway when I moved in. This cave-man apparatus was tethered to the back of the house by an ancient umbilical cord. 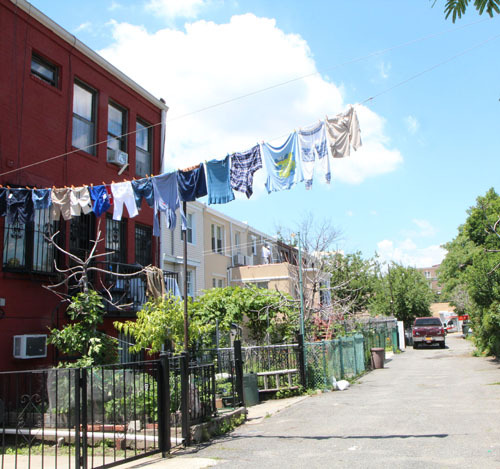 Photo by Nancy A. Ruhling
Letting it all hang out.

I cut this lifeline to the past without a second thought. Its significance didn’t dawn on me until months later when my neighbors heralded the warm weather by letting their laundry flap in the wind, sending celebratory semaphore signals to the spring sky.

The only time I had ever seen such a contraption was in the 19th-century black-and-white photos of impoverished people in inner-city tenements that were in my elementary school history books. 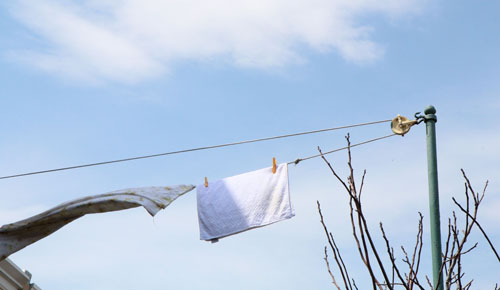 Photo by Nancy A. Ruhling
A line that goes back in time.

Back home in backwater Missouri, my mother had had an aluminum laundry line that opened and folded like a cheap made-in-Japan umbrella. She planted it in the center of the back yard like a Christmas tree. I used to play hide-and-seek between the sheets.

We hung our laundry on the line to let it soak up the sweet smell of the grass-fed suburban sunshine and to save money. We didn’t care whether the neighbors saw our underwear. Dryers were expensive. Penny for penny, it was worth the loss of privacy. 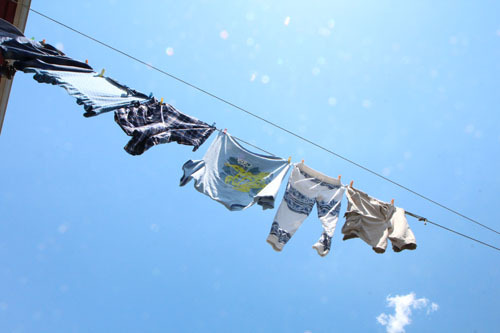 Photo by Nancy A. Ruhling
Sunning themselves.

But I wasn’t in Missouri any more. I didn’t understand why anyone would want their intimate apparel to smell like p.u. de Con Ed, whose smoke billows in the background of our block.

This wasn’t about being green. A decade ago, when I arrived, sustainability wasn’t spoken in Astoria.

Nor was it about an avant-garde art happening. Nobody was entertaining Yoko Ono’s idea of discussing dirty laundry (and how it got that way) with guests. 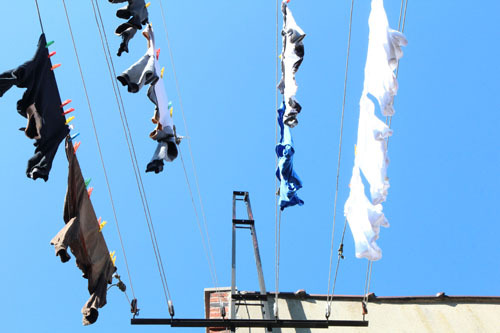 Photo by Nancy A. Ruhling
Waving to the breeze.

If anything, it was about waving the flag of tradition.

Many of the houses in the neighborhood are owned by people who came to this country 30, 40 and even 50 years ago. Their drip and dry pays homage to the homeland. 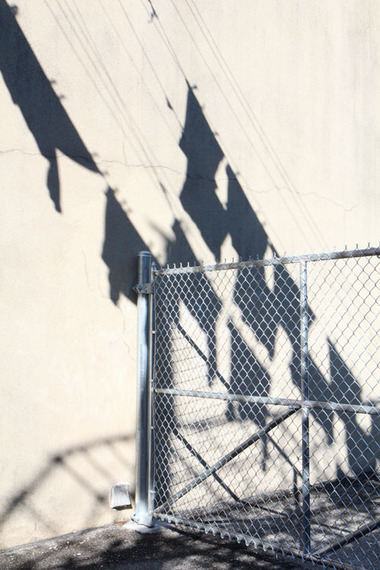 Photo by Nancy A. Ruhling
Clothespins and chain link.

The other day, I knew summer had finally arrived because my 40-year-old neighbor hung her laundry on the line. She’s Italian. Her parents, who live a street away, came here in the 1980s.

As I stared at the soccer shirts and snow-white sheets that were strung across her second-story porch like a necklace, I asked her why she didn’t put them in her dryer.

She said her mother always hung them out. So, she supposed, had her grandmother. And her great-grandmother.

Bra by bra and brief by brief, her son and daughter will add themselves to the family’s laundry lineage. They already know how to pull the rope.