On the gleaming coffee table in the surgically spotless living room, there are only three items: a scrapbook, a binder and a pamphlet. They’re lined up like soldiers standing at attention.

Beatrice Frish, a white-haired woman with blue eyes and an ear-to-ear smile who wouldn’t top five feet even in stilettos, unfastens the white ribbon of the scrapbook and starts flipping through the pages.

Things begin on Aug. 13, 1874. That’s when her maternal grandparents got married. Beatrice — “mostly I’m Bea” — points out the engraved invitation that heralded this auspicious event. 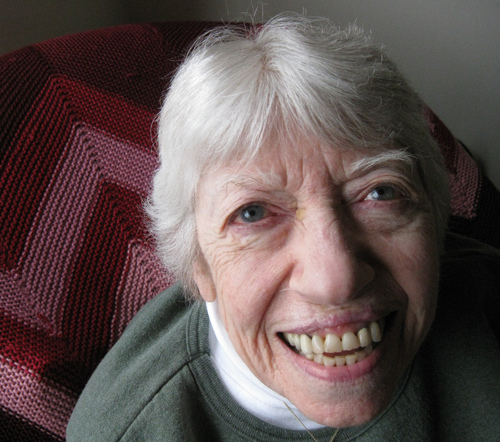 Photo by Nancy A. Ruhling
Bea and her winning smile.

Here are the photos from their 50th wedding anniversary, which was celebrated in 1924, the year before Bea made her grand entrance into their world. The occasion’s menu, which Bea has saved, includes pineapple surprise, whatever that was.

A couple of pages later, and just like that, it’s 1944. Now, they are marking their 70th anniversary with a cake and a big kiss for the camera. 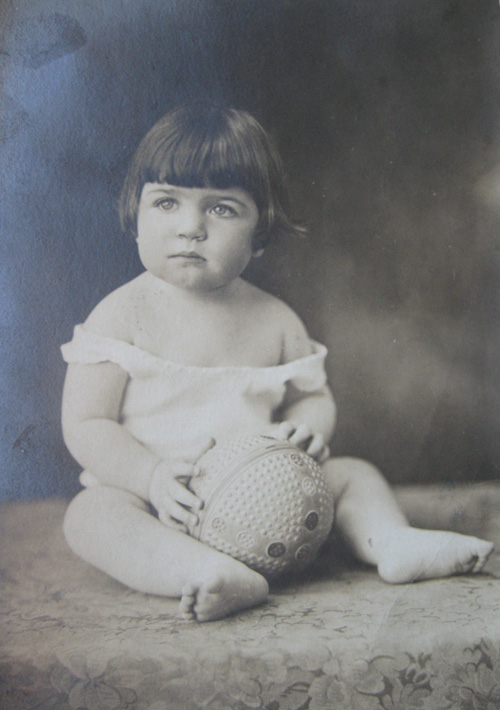 Photo by Nancy A. Ruhling
Bea, cute as a button, in her baby picture.

“You know, my grandmother was alive when Lincoln was shot,” she says, running her hand over the tissue paper seating chart she made that identifies the scores of guests at this last party. “I don’t know who all of them are, but I tried my best to fill in names.”

As she says this, she’s sitting in an easy chair that’s covered with an afghan knitted by her mother-in-law. On the wall behind it are the portraits of Beethoven and Schubert that belonged to her father and the drawing of her husband, Erwin, that was done by one of his army buddies while they were serving their country in WWII.

The carved Chinese table in the foyer was her mother’s, and the framed drawing of the chandelier was done by her father when he was a student at Cooper Union. 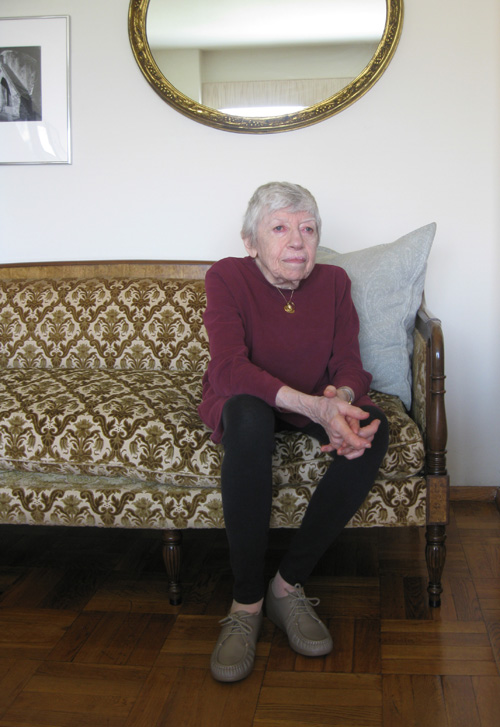 Photo by Nancy A. Ruhling
Bea fills her days with activities and happy memories.

The scrapbook she made in junior high for her civics class, she’s kept that, too, but it’s packed away. “LaGuardia was mayor, and it was a very exciting time to be in New York City,” she says.

Saving nearly a century and a half of family memorabilia is a remarkable feat. “I’m a keeper,” the 86-year-old Bea says, pointing to the pin her grandmother is wearing in the photo; she has that, too. “I don’t like a lot of little things cluttering, but my closets are bulging.”

Now, Bea turns her attention to the binder. This is where she keeps her stamp collection. “Every time I got an unusual stamp, I threw it into a box or an envelope,” she says. “I’m most interested in U.S. stamps that depict America’s history. I almost never buy stamps later than 1950, and I never spend a lot of money on them.” 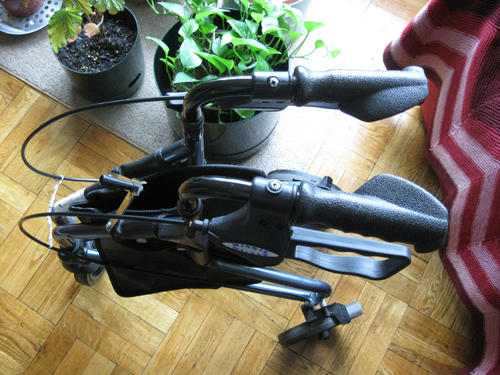 Photo by Nancy A. Ruhling
A walker helps Bea keep in step with life.

She stops at stamps featuring Franklin and Eleanor Roosevelt. “I remember hearing FDR’s first inauguration address on the radio,” she says. “I sat on a little stool, and it was just thrilling. The country was so hopeful, and it was such a rotten time.”

So rotten, in fact, that Bea’s father lost his job and the family of four — Bea has an older sister — was forced to move in with Bea’s grandparents, the ones in the photo album, for two years.

“We weren’t poverty-stricken, but we had a very difficult time,” she says. “When my dad couldn’t find work, he decided to start his own electrical contracting business, but it was the Depression — not the right time for that.” 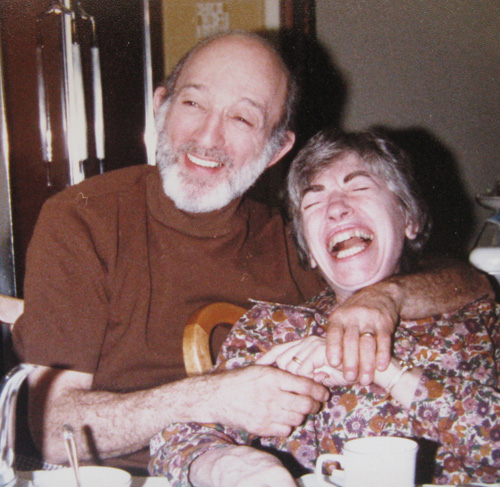 Photo by Nancy A. Ruhling
Bea and Erwin are all smiles in 1981.

Bea’s paper trail down memory lane ends with the last item, the seniors newsletter she used to put out twice a year for her co-op. She spent a lot of time on each issue, serving as writer, editor, copy editor, proofer and ad salesperson. But when Erwin died six years ago, she lost heart and gave it up.

Ah, Erwin. What a sweet and kind guy he was, and what a wonderful sense of humor he had. She met him at a dance. She was a working woman with a master’s degree in public administration and closing in on 30, a pretty old age not to have a husband. Not that anyone ever said anything.

“Erwin was an excellent dancer,” she says. “I loved to dance, but I wasn’t very good; I always stepped on his toes, but he didn’t care; he just liked holding me.” 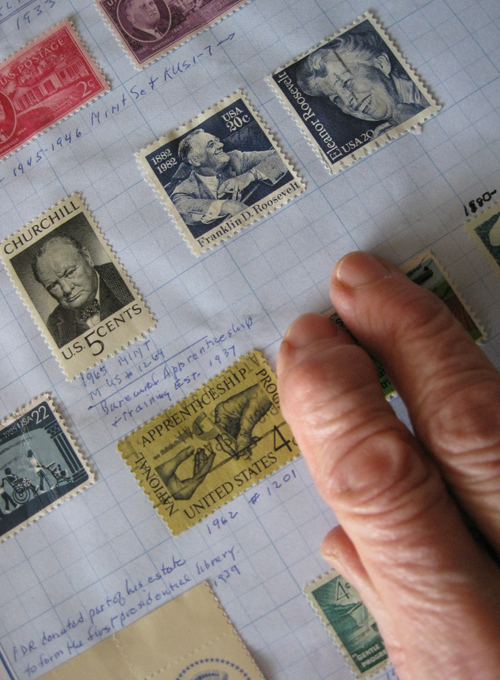 Photo by Nancy A. Ruhling
Bea’s stamp collection keeps her in touch with history.

Bea doesn’t dance any more. Her walker, which she started using a couple of years ago after she fell and chipped her femur, isn’t such a good partner. And her scoliosis makes it hard to breathe.

After the children arrived — she has two daughters — Bea went back to work part-time and when they were grown, she took a full-time job at the New York City Health and Hospitals Corp. She was an interviewer for patient accounts.

She stuck with it until she retired some 20 years ago. Everything was grand because Erwin also had stopped working, and, at last, they had time to spend together. 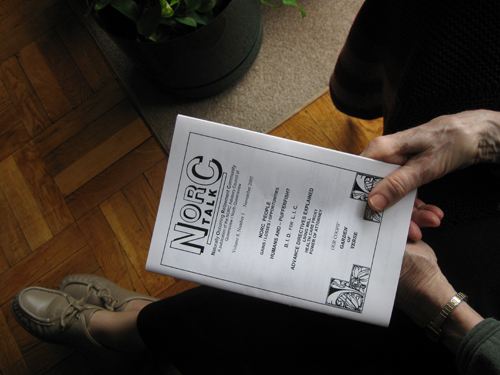 Erwin’s unexpected death was a shock. “I had to make do,” Bea says. “I’m a practical person, and when this happened, I was determined that I wasn’t going to fall apart.”

She didn’t. She befriended other seniors at her co-op, and she took to visiting her daughters — one’s in Chicago, the other’s in Connecticut — and her grandchildren more often.

“I drive to Connecticut all the time,” she says. “I know the road quite well. But I’m careful, and I don’t drive at night.” 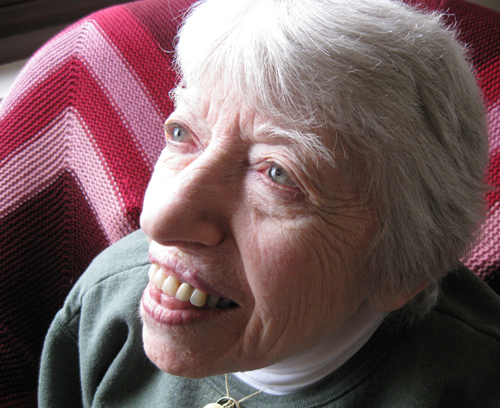 Photo by Nancy A. Ruhling
Bea’s hoping to make it to her late 90s.

Bea anticipates she’ll be around for a decade or so more. After all, her maternal grandfather hit 101, her grandmother lived to be 94, her mother was 96 and her father was 90.

“I’ve had a reasonably happy life,” she says. “I had a good husband and children who give me joy.”

But there are still things she’d like to do. “I have bookcases filled with English and American classics, but my time to read them is running out,” she says.

That’s why she has to finish her scrapbook of family photos. It’s her history book to her grandchildren.