Who’s that guy? The one at the back of the pool hall. See him? You can’t miss him. He’s the big dude, the one with the scary scorpion inked on his arm and the spiky porcupine hair the color of the 8 ball he just sent flying across the felt like a meteor.

Before the answer comes, he trains his eye on the nine ball. He’s right on the money. He pockets it and cashes in.

Alaska. That’s what everyone calls him. If you’re gonna be a big-time pool player, ya needa nickname. Alaska’s from Alaska, and Sean Christopher Morgan‘s been stuck with that state moniker ever since he and his pool cue came to New York City a decade ago. 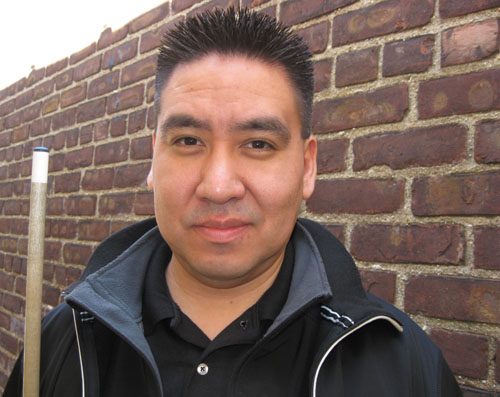 Photo by Nancy A. Ruhling
Alaska is his nickname; pool is his game.

Not that he minds; it’s all part of his game plan to be a pro player. “It’s not about the money,” he says. “I love and respect the game, and I live for the competition, the cheers of the crowd.”

Alaska, who’s proud to tell you he’s American Indian, Alaska native and half Italian-American, took up pool when he was 16. By then, he was more man than boy. He was raised in the fly-speck village of Unalakleet then the big city of Anchorage by a single mother who took to drinking with the same passion he took to pool.

“My mother and I fought a lot,” he says. “I got a work permit at 13 and dropped out of high school when I was in my sophomore year. At one point, I must have been 13 or 14, I was living on the street.”

By the time he and his friends wandered into an Anchorage pool hall, Alaska had a steady job and an apartment. 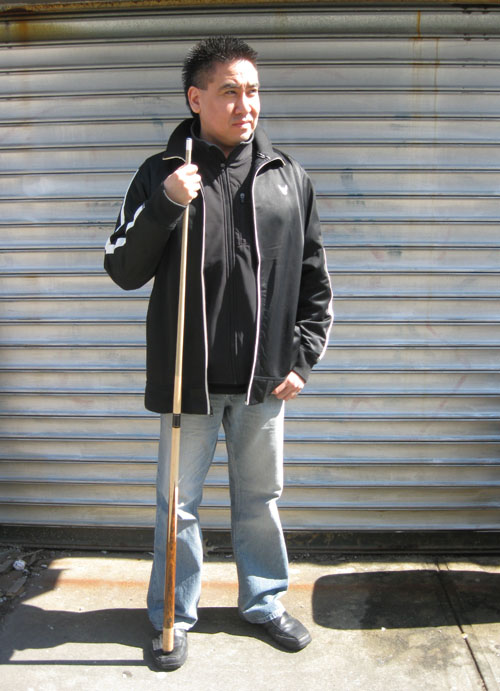 Photo by Nancy A. Ruhling
Alaska got into the game as a teenager.

“A guy there asked me to play for money,” Alaska says. “My pockets were always full because all I did was work. I told him I’d never done it before and he’d have to teach me.”

Boy did he learn a lesson! They played three sets for $20 each.

From that day on, Alaska has devoted himself to the game. “Pool was a godsend,” he says. “Up until that time, all I did was work. Pool made life exciting.” 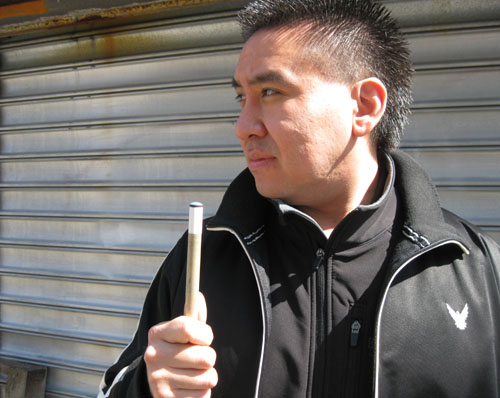 Photo by Nancy A. Ruhling
When he ran out of people to play, Alaska came to New York.

The thing is, Alaska got so good that he pretty well beat all the players in The Last Frontier. After winning the Fur Rondy and the state’s Men’s Nine-Ball Open in the same year, Alaska, at age 25, was forced to put down his cue.

“The competition became very limited, and I became very depressed,” he says. “I beat everybody who had ever beat me.”

And then he met a girl. Or should we say she met him. She asked him to come back to New York City with her. She thought he was coming for a vacation; he knew he’d never leave. 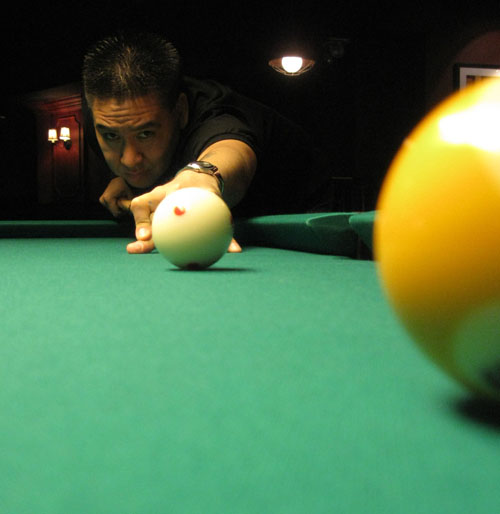 Photo by Nancy A. Ruhling
Alaska takes his best shot.

And that’s what he did. Soon, he was racking up wins faster than he could rack up his billiard balls; he was victorious at the New York City Championships, the New York Mayor’s Cup and nine tristate events, and he became a regular at Society Billiards in Manhattan.

But there are only so many players, and as he had done in his home state, Alaska left them all in the chalk dust. 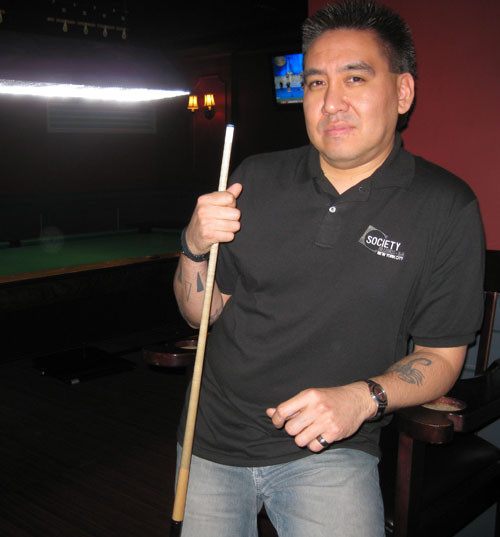 Photo by Nancy A. Ruhling
The pool hall is Alaska’s second home.

“The pool world is very small, and my name became so big in the tristate area that the money games have diminished,” he says. “Nobody wants to play me because they know they’ll lose.”

That’s why Alaska has a part-time job at a Manhattan steak house, and that’s why, lately, he’s been giving pool lessons.

“It hurts me, it crushes me that I can’t play pool all the time,” he says. “It’s hard because a lot of the tournaments are on the weekend, and I have to work so I can’t go. But I have to sacrifice so I can pay my bills.”

Alaska plays it straight and narrow. He’s not a party person — “I didn’t have my first drink until I was 23, and I don’t drink now,” he says — and between work and pool, there’s not much time for anything else, which is just the way he likes it. 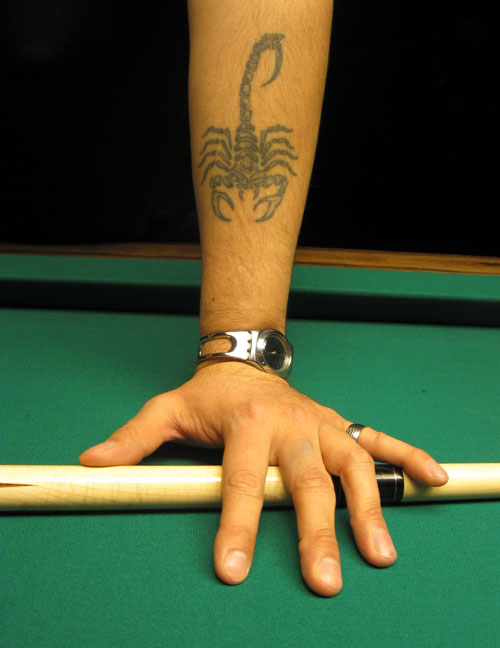 Photo by Nancy A. Ruhling
Alaska wears his sun sign on his arm.

Alaska believes in the game and in himself. He’s confident that he can come out a winner. “Someday, I’d like to be a touring champ,” he says, “and I can picture myself owning a pool hall.”

In the meantime, he’s putting his money and his eye on the nine ball. 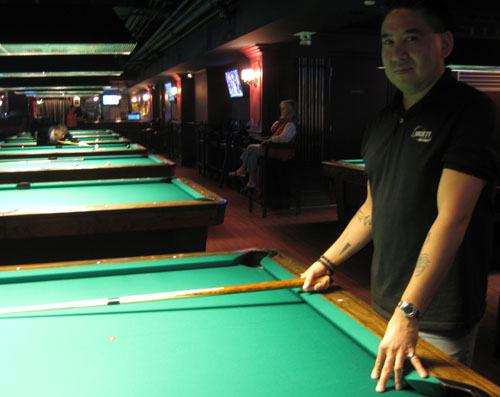 Photo by Nancy A. Ruhling
Alaska sees a bright future in the pool hall.

He picks it out of the pocket and peers into it as if it’s a crystal ball.

“This is my world, and I love it,” he says, cradling it in his hand like a priceless gem.