The convent of Immaculate Conception Church is jailed from 31st Street by towering black bars. The nuns don’t use the double front doors, crossed with wooden crucifixes.

So it is that Sister Margaret McCabe, a wisp of a woman as sturdy as an oak, answers the bell at the side entrance.

The convent has been her home for a quarter century, shortly after she became the chaplain of the Robert N. Davoren Center on Rikers Island. She leads the way to a single-windowed, cell-like room. 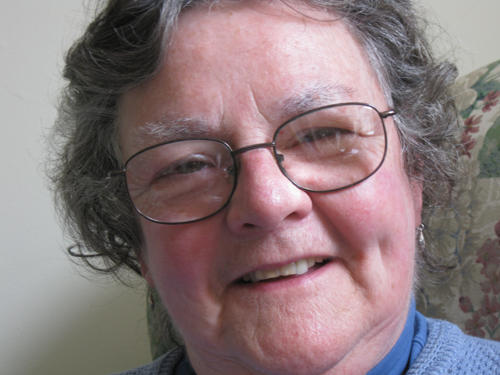 Photo by Nancy A. Ruhling
Sister Margaret was in grade school when she decided to do God’s work.

It contains a pair of chintz-covered wingbacks, a red sofa, a 1920s folding dining table and an end table illuminated by a solitary lamp. Like Sister Margaret, these hand-me-downs are praiseworthy, practical and plain.

Sister Margaret, who just turned 70, was raised on Crescent Street, a handful of blocks away. Her parents — her father came from Ireland as did her mother’s parents — were upstanding, church-going people, which is how she came to be enrolled in Immaculate Conception’s school.

The oldest of three girls, Sister Margaret was a tomboy who played sports and piano, danced like a dervish and ran like the wind.

“I wasn’t the most probable candidate for religious life,” says Sister Margaret, who clips her words are precisely as a gardener trimming boxwood hedges. “But when I was eight, I had to write a composition for school on what I wanted to be. I really wanted to be a sister. The awe of the holy, the sense of being close to God, that’s what attracted me.”

The nuns at Immaculate Conception were Holy Union Sisters, an order devoted to teaching. When it came time for Sister Margaret to go to high school, she chose Holy Union Prep, in Rhode Island, and after three more years of formal training, she pronounced her vows of poverty, chastity and obedience in 1961. 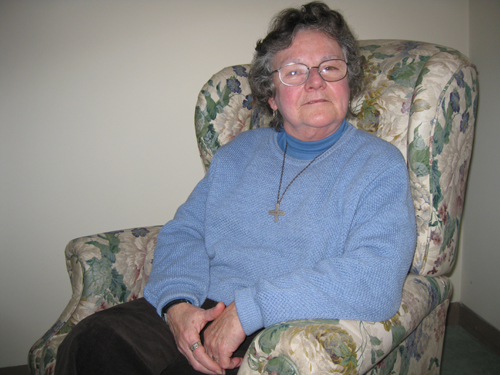 Photo by Nancy A. Ruhling
Sister Margaret has been at Immaculate Conception for a quarter century.

Her first assignment was teaching second-graders in a Catholic school in Baltimore.

Sister Margaret embarked upon religious life at a time when the world and the church were on the cusp of change. Through the decades of her devotion, habits would get shorter and more stylish before being replaced by street clothes, and sisters such as herself would get more freedom in choosing what they wanted to do and where they wanted to work.

“I wanted to do this, so the strict rules didn’t matter,” she says. “I don’t think my life was any harder than my sisters’, who both married, and I didn’t feel I was missing anything.”

Her teaching took her to various states and exposed to her a variety of subjects and students. She went to college part-time, eventually earning a bachelor’s degree from the College of the Sacred Hearts. She also earned a master’s degree in guidance and counseling from Loyola University and a professional diploma in counseling and personnel services from Fordham University.

“I realized, at some point, that I was good with adolescent kids who had problems,” she says. 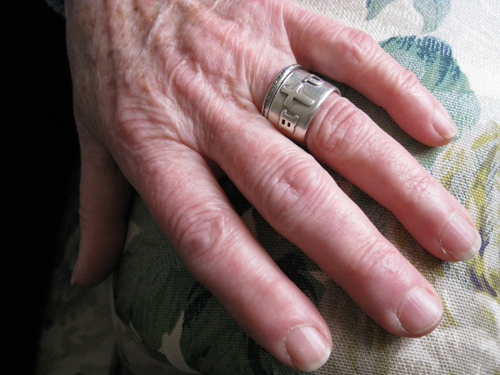 Photo by Nancy A. Ruhling
On her left hand, her mother’s wedding ring and a religious ring are married.

Eventually, she volunteered to be the principal at St. Francis de Sales High School in Harlem. She served there for seven years before getting the post at Rikers, where she works with adolescent boys and adult men.

Sister Margaret may be only five foot three, but she stands tall at the jail. “Some people think you have to be six foot five and a bruiser to do this job,” she says, chuckling.

What she offers inmates is simple — love with no toughness or any other strings attached.

“These people have no one who cares for them,” she says. “And I tell them that I love them, that God loves them.”

She remembers a young man named Augustine. Tall and slender, he came to her office with his head down. Sister Margaret shook his hand — “I always feel the human touch is very important” — and proceeded to listen to his story. 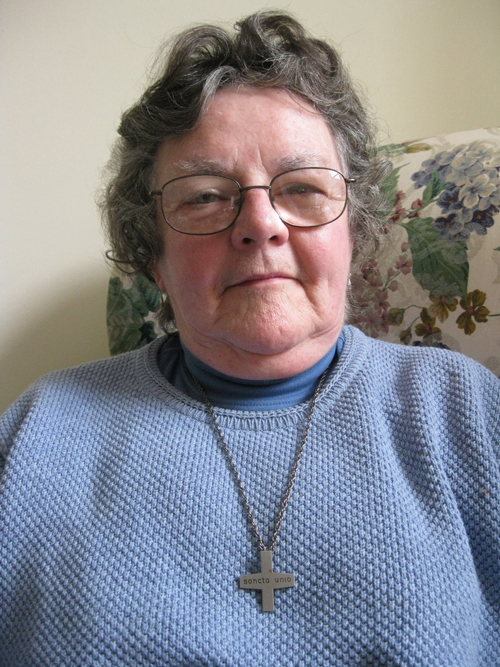 His mother, he told her, was mentally ill and to cope, he smoked pot and stole cars.

“When he finished, I set up another appointment with him, and I asked him what else I could do for him,” she says. “He told me, ‘A hug would do.’ And it did.”

Sister Margaret, as the chaplain for the Emerald Society of the Correction Department, marches in the St. Patrick’s Day Parade. She was given a medal by Mayor Mike Bloomberg last year for her service to the city.

“I was shocked when I got it,” she says, still amazed. “I get my medals every day because people are good to me.” 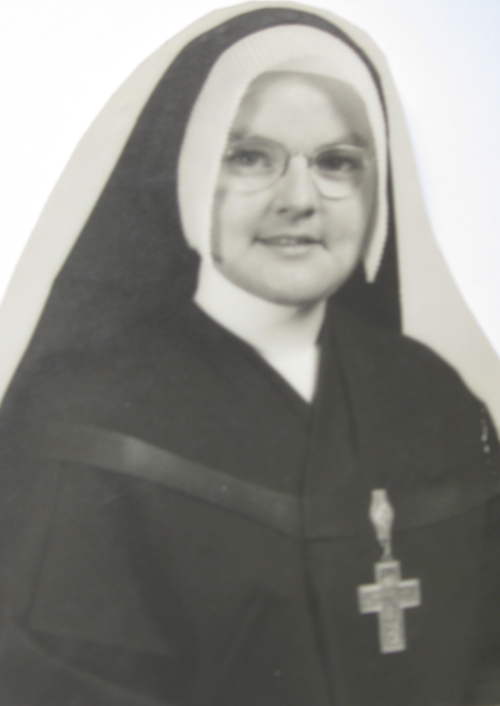 Photo by Nancy A. Ruhling
Sister Margaret in the 1960s shortly after taking her vows.

Being a Rikers chaplain is much more than a job to Sister Margaret. “The people in my jail are my parishioners,” she says. “Working at Rikers is part of my life, of who I am. And I always feel I get more than I give.”

To unwind, Sister Margaret takes daily walks to the river and reads espionage thrillers. Robert Ludlum is one of her favorites. 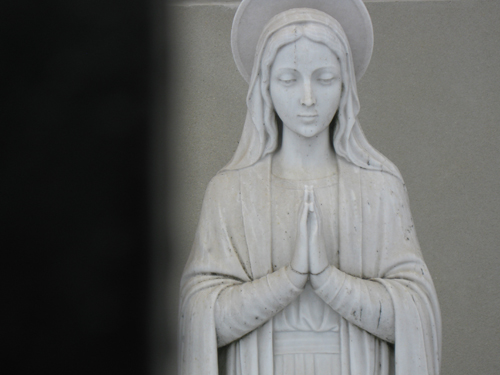 Photo by Nancy A. Ruhling
The Virgin Mary stands guard behind the convent’s bars.

When she’s not doing jail duty, she’s working in the convent, where, like the other sisters, she helps with the cooking, cleaning and shopping. Outside its walls, she spreads God’s word through lectures and presentations. Saturday, she’s a participant in History Roundtable: Sisters of Compassion at the Greater Astoria Historical Society.

“People, not things, are important to me,” she says. “I don’t own anything. My salary goes to the sisters, but I do get a budget for personal and business expenses.”

The serviceable suits and sensible shoes she wears to Rikers, she gets them on sale. “I am, after all, my mother’s daughter,” she says. 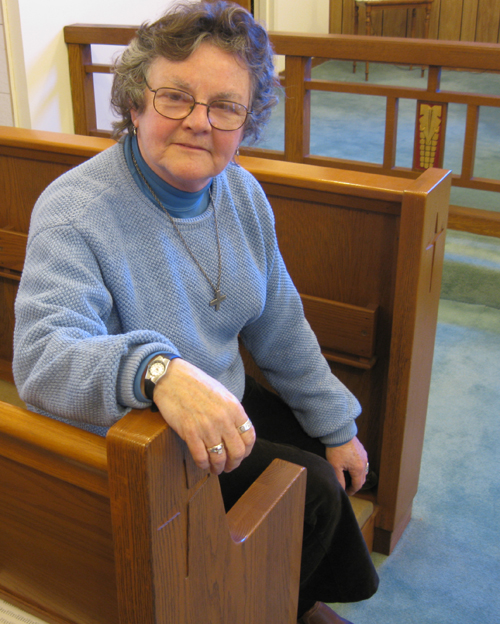 Photo by Nancy A. Ruhling
Sister Margaret in the convent’s chapel.

Sister Margaret knows she can’t turn around the life of each inmate, but she does hope that she makes a difference. “If I judged my success by my own values — having all the inmates become good Catholics and never returning to jail — I would have retired long ago,” she says.

God willing, she’ll continue at Rikers for at least five more years. “When I get to the point where I can’t walk up and down the corridors, I’ll give it up,” she says. “But Catholic sisters don’t retire while we’re well.”

When Sister Margaret leads me out of the convent, she puts out her hand to shake mine. Then she stops herself.

“Hon, you deserve a hug,” she says, throwing her arms around me.