Way back in the corner of LaGuli Pastry Shop next to the swinging door that leads to the bakery, Rosario Notaro is sipping a cup of coffee and munching on a crusty piece of Italian bread.

Rosario, a compact man with big milk chocolate eyes and the energy of a youngster, doesn’t like cookies and cakes; perhaps it’s because he’s been baking them nearly all of his 74 years. Or maybe being around sugared treats all the time has soured his sweet tooth. 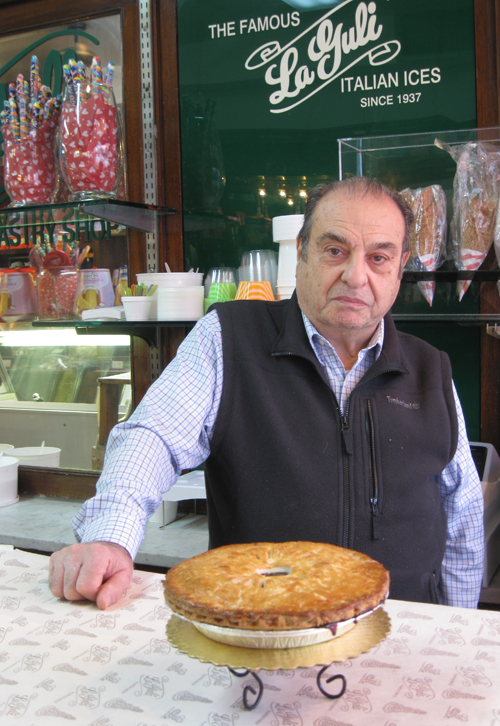 Photo by Nancy A. Ruhling
Rosario and the bakery were born the same year, 1937.

Rosario, an only child, and LaGuli were born in the same year — 1937. Rosario entered the world in February, and by June, the pastry shop had joined the two other bakeries his parents, who were from Palermo, owned in Manhattan.

LaGuli, the name, was inspired by Guli, a well-known bakery in Palermo. The Guli made the Astoria shop sound famous; the La made it sound fancy.

“We lived upstairs, and I used to sleep under the racks of paper bags when I was a baby,” he says. “When I was five, my father made me a little bench so I could reach the scale to weigh the cookies. And I worked in the back with the bakers; I used to put the glazed cherries on top of the cookies and break the eggs into the batter. It was fun at that time.” 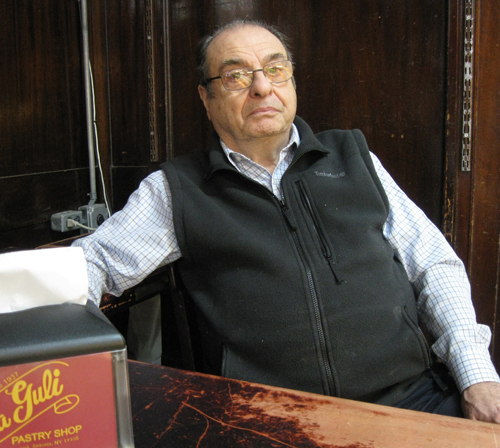 Photo by Nancy A. Ruhling
Rosario came out of retirement in 2005 to come back to LaGuli.

Rosario’s world became a cakewalk around LaGuli. After completing kindergarten at P.S. 122 10 blocks away on Ditmars Boulevard, he went to school at Immaculate Conception, which is on the same block as the shop. He spent his free time at LaGuli, doing tasks like filling the chocolate-coated cannoli.

During his second year at Bryant High School on 31st Avenue, his father had a heart attack, so he joined the family business full time.

“I wanted to do it,” he says. “The only part I hated was the holidays when my friends from school came in all dressed up, and I had to work.” 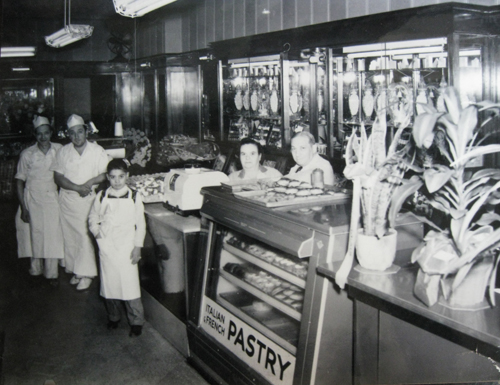 Photo by Nancy A. Ruhling
As a child, Rosario’s job was to put the cherries on top of the cookies.

By 1953, when Rosario was 16, his father decided to retire and moved the family back to Sicily. He kept the Ditmars building and left the bakery in the hands of his brothers and brother-in-law.

“In Italy, I was a son of leisure; I liked doing nothing,” Rosario says.

When his father died, in 1956, Rosario returned to LaGuli. “But I was phased out in a sense; my mother passed it to my uncle, and my uncle sold it to my cousin, who had it for 30 years.”

Rosario had a fiance, Concetta, in Sicily, so he returned there and started a family. “But I couldn’t make it in a bakery in Italy, so in 1962, we all came back to Astoria,” he says. 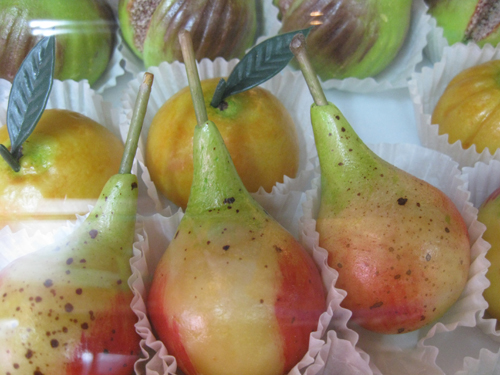 Photo by Nancy A. Ruhling
One of LaGuli’s specialties is marzipan fruit.

Eventually, he opened two bakeries — one in the Bronx and one in Mount Vernon. “My kids — by this time I had a daughter and two sons — used to help out after school occasionally,” he says. “I didn’t want them to work there much because I didn’t want them to have to make the sacrifices I had.”

In 1979, the family went back to Italy for what Rosario hoped with be the last time. But in 1988, they crossed the Atlantic and again settled in Astoria. Rosario worked in Manhattan bakeries until he retired in 2002.

But he didn’t get much time off: In 2005, Rosario’s daughter, Maria, bought LaGuli back. “It’s been like a roller coaster the last 50 years going back and forth to Italy and getting the store back again,” he says. 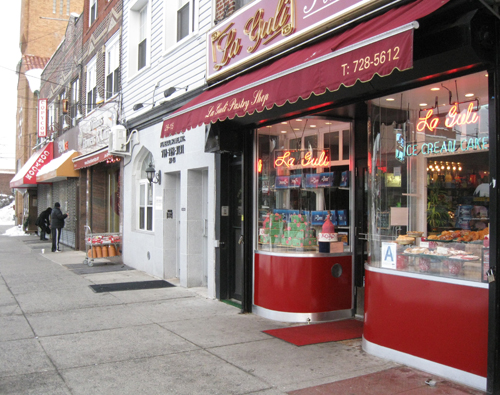 Photo by Nancy A. Ruhling
The pastry shop looks much as it did in 1937.

Every day, Rosario gets to LaGuli at six to get things up and running; he generally leaves by noon. Sometimes, he makes deliveries. When he’s not at his table, he’s standing on the sidewalk under the maroon awning. His face is illuminated by the neon sign in the display windows, where LaGuli’s signature Barbie doll birthday cakes are on display.

Things on Ditmars Boulevard have changed, he says, a bit of longing in his voice. There used to be a mom-and-pop grocery, an ice cream parlor, a German deli, a fruit store and even a toy store. Why, the only thing that’s older than LaGuli, he marvels, is O’Shea-Hoey Funeral Home next door. 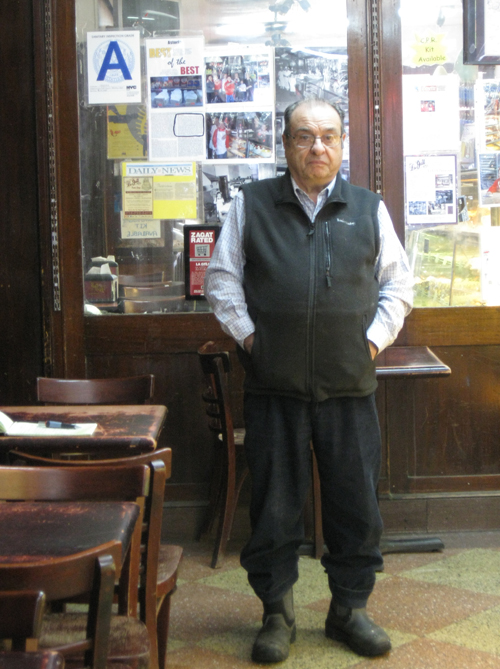 Photo by Nancy A. Ruhling
Rosario mans the early shift at the bakery.

Rosario’s sweet spot, LaGuli, looks much as it did when the two of them made their grand entrance. His grandchildren — 16-year-old Marco and 12-year-old Cara live in Germany and baby Sara calls Rome home — like to help out when they are in town for the holidays.

“I can’t see myself retiring completely,” he says as he greets a longtime customer by name. “Every time I step through the front door of LaGuli, it’s like coming back home.”