The first thing you see is the pink poodle prancing like a princess. Her Liberace collar dances in the sunlight, nearly blotting out her pipsqueak escort, a Pomeranian promenading in a mohawk.

They’re leading Leia Gatch and her 6-year-old tow-headed son, Alex, down Ditmars Boulevard. It takes them an eternity to walk a block. They are catnip for smartphone shots. 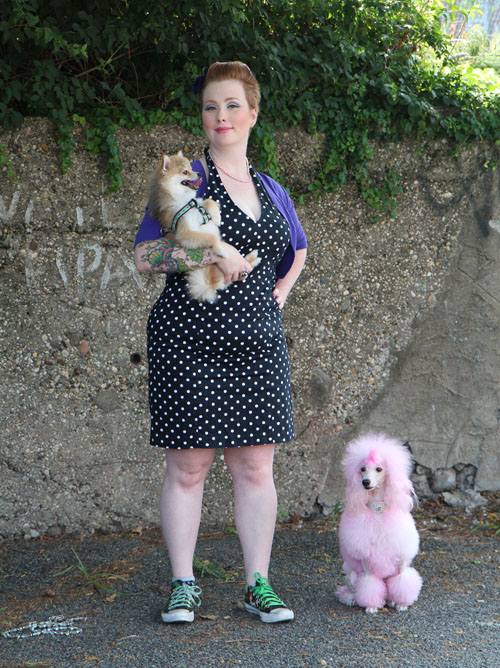 Photo by Nancy A. Ruhling
Leia and friends: The pink poodle is Bridget. The Pom is Trevor.

Despite what it looks like, this is not a circus act. It’s life as art, or at least that’s what Leia calls it. Bridget, the poodle, and Trevor, the Pom, just think it’s fun. Alex considers it cool; he likes to be the center of attention.

Leia, a Rubenesque cherry-lipped kewpie doll with tattoos running down her right side like a river, embraces her celebrity, playing up to the Paparazzi. She hides her eyes behind starlet sunglasses.

If you must know, Leia isn’t famous. She’s a dog groomer. She dyed Bridget pink as an artistic experiment.

“It’s vegan dye,” pipes up Alex, adding that their other Poms, Audrey and Logan, have conventional haircuts and their cat, Brisco, isn’t a fancy feline. “I’m a vegetarian, and mom’s vegan, so it’s all right.”

Alex loves animals almost as much as Leia did when she was growing up in Forest Hills. 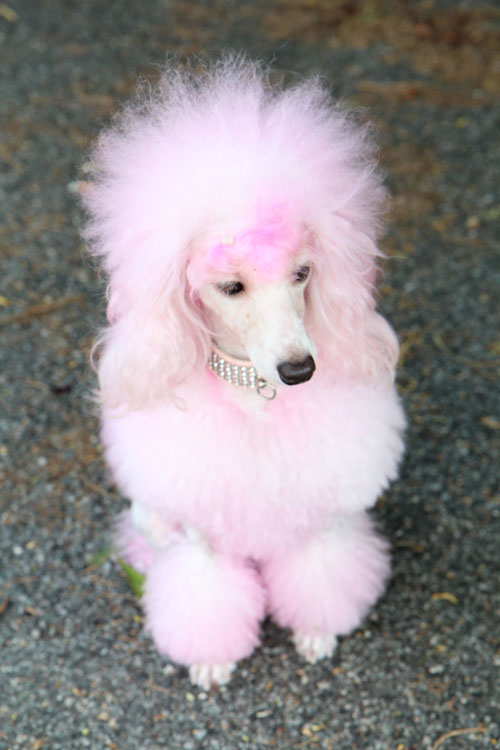 Photo by Nancy A. Ruhling
Bridget is one of Leia’s live art projects.

“I’d bring home every injured animal,” she says. “It drove my mother nuts and made my dad crazy because he was allergic to all things with fur.”

From the start, it was her intention to devote her life to animals. That’s why she decided to become a veterinarian.

“I didn’t like dissection,” she says. “And when we had to dissect a cat, I dropped out of school.”

She fell back on her second love, art, and enrolled in graphic design classes. But it was too difficult to go to college and hold down two jobs. The paychecks won out, and she began working as a graphic designer for a furniture company. 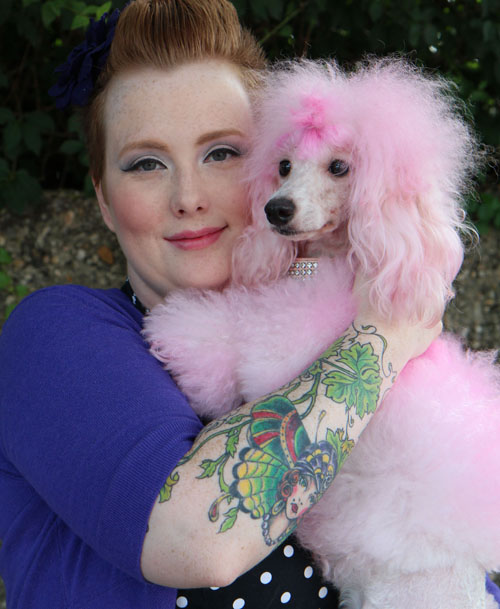 Photo by Nancy A. Ruhling
Poodle pink and arm ink.

That was a long time ago, but one memory that she wishes would go away stands out. On 9/11, Leia was supposed to be in the Twin Towers photographing a furniture installation. But she forgot her camera, so she decided to go to her Chelsea office instead.

“We were lucky,” she says. “All of our people got out. But it was truly terrifying. I had seen the hole in the towers. It took me five years to get that image out of my mind.”

By the time she settled in as a marketing director for another furniture company, she was married and living in New Jersey.

“I was totally focused on my career,” she says. “I have an autoimmune disorder and was told I couldn’t have children. So we got a quarter of an acre and six dogs instead.” 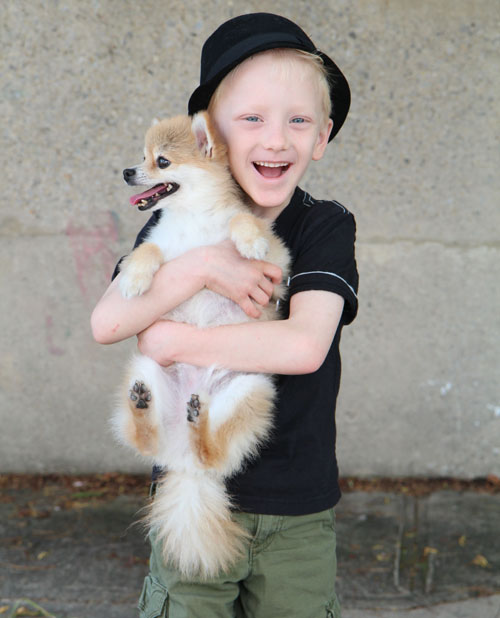 Photo by Nancy A. Ruhling
Trevor gets a bear hug from Alex.

But once Alex was born, Leia didn’t want to go back to work.

“I felt terrible every time I left him,” she says.

She enrolled in grooming school when he was 6 months old.

“I love working with animals,” she says, adding that she recently started a house-call business with another groomer that lets her meet dogs all over Astoria. “Doing it allows me to combine my interest in art and animals.” 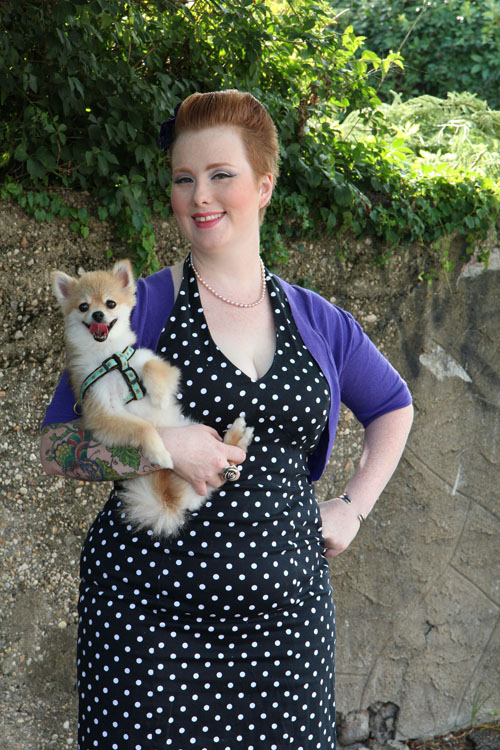 Photo by Nancy A. Ruhling
Trevor savors his celebrity.

When she became a single parent — she declares she’s “happily divorced” — she moved back in with her parents. About a year and a half ago, she and her menagerie moved in with her boyfriend, Tony Sherwood, a meat-eating web designer, who, Alex reveals, introduced him to “real” bacon.

“I’m very grateful to have found him,” she says.

Leia, who paints, sculpts and carves in her spare time, sees art in everything, even Bridget’s hot-pink hairdo and the shoulder-to-shoulder witch tattoo that flies across her own back on a wicked-looking broomstick. The witch is no accident: Leia is a wicken who runs her own coven. 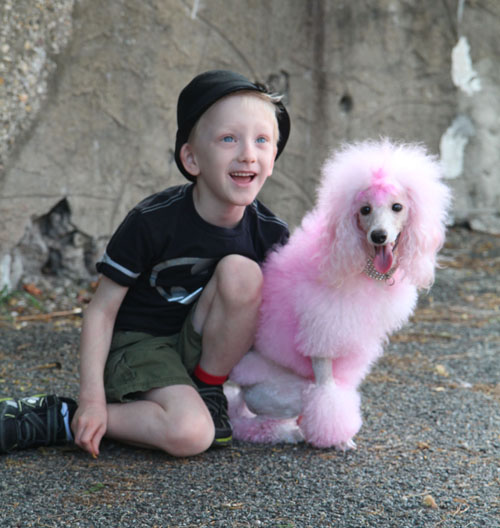 “It’s nature-based spirituality,” she says. “It’s about reverence and love for all creatures.”

The wicken stuff started in junior high when Leia began being seriously involved with the Catholic Church.

“I wanted to lead masses, but women are not allowed to do that,” she says. “I loved Catholicism, but the pieces didn’t all fit for me.” 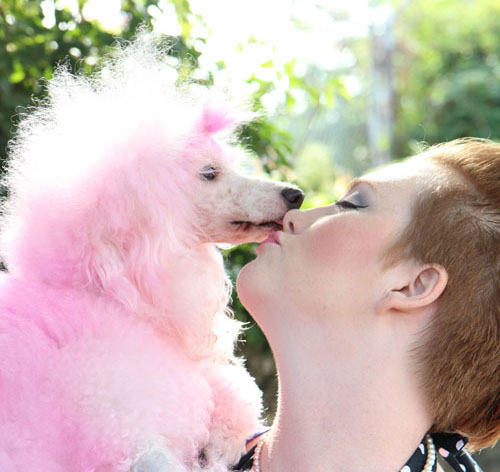 Leia may be doing a lot of things, but she makes it clear that her priority is and always will be Alex.

“He comes first,” she says. “That’s how I live my life. I don’t want to miss a single minute of his childhood years.”

Bridget barks, and Alex scoops Trevor up in his arms like a baby.

When they are ready to make their grand departure, Leia arranges the dogs in the rolling carrying case that matches her lipstick and heads to the subway.