When Chubby Icaza opens the door, the sweet scent of baking bread spills out into the street where Tom Cat, which is sheathed in translucent turquoise windows that look like the deep blue sea, is king of the block.

The nose doesn’t expect such a thrill so close to the car-clogged 59th Street Bridge. After 23 years, Chubby is used to the mouth-watering aroma. But each time he breathes it in, he breathes a sigh of relief. If it were not for Tom Cat, he wouldn’t be here. 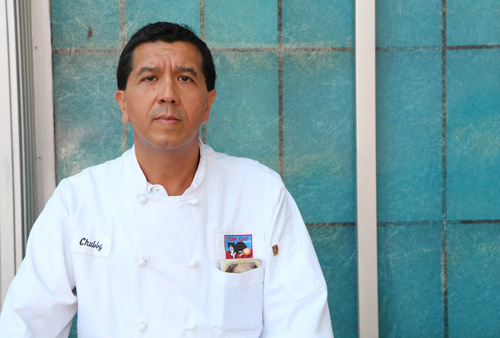 Photo by Nancy A. Ruhling
Chubby has been with Tom Cat 23 years.

Chubby (it rhymes with ruby) spent the first 26 years of his life in Ecuador. Soon after he was born in the agricultural city of Quevedo, his parents divorced, and he and his mother moved in with her parents. Chubby remained an only child until his mother remarried three years later and gave him seven siblings.

In those early days, Chubby’s head was filled with lofty ideas. He had an aptitude and appreciation for construction and mathematics and pictured himself as a civil engineer. He was sent to Guayaquil, his country’s biggest and most populous city, for high school and college. But a degree for him was not to be. 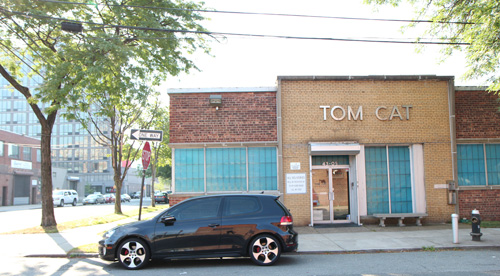 Photo by Nancy A. Ruhling
Forget GPS: The nose knows the way to Tom Cat.

“I had to quit at the start of my third year,” say Chubby, a tall man with black hair who wears his baker’s whites with a flair that belies his serious air. “The grandfather who helped raise me got sick, and I went back home to work on his farm.”

For three years, Chubby tended the coffee, cocoa and soy fields. By this time, his parents and some of his siblings had established themselves in New York City, and Chubby had a wife and infant son of his own. 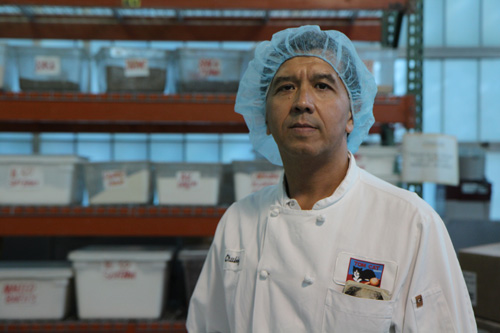 Photo by Nancy A. Ruhling
Tom Cat is Chubby’s first and only job in America.

In 1990, Chubby joined them in America, leaving his own family behind. 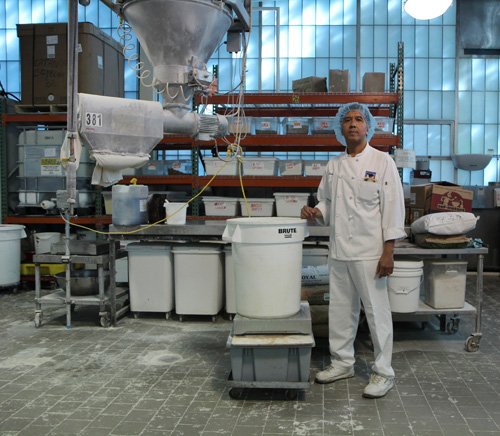 Chubby didn’t have much trouble adjusting to his new country. He had a good grounding in spoken and written English, and his stepfather had gotten him a full-time job working with him at Tom Cat.

If he were lonely, he didn’t have much time to feel sorry for himself. Tom Cat, founded in 1987, was an independently owned boutique bakery; the workers treated each other like family, and everyone pitched in to do all the jobs. 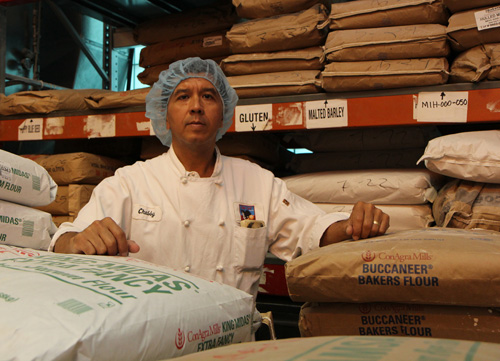 Photo by Nancy A. Ruhling
Three generations of Chubby’s family have worked for Tom Cat.

“I started as a helper and learned how to do everything,” Chubby says, adding that he originally worked the night shift. “A couple of months later, my stepfather and I were made supervisors.”

What wages Chubby didn’t send home he put aside for his son’s college education. 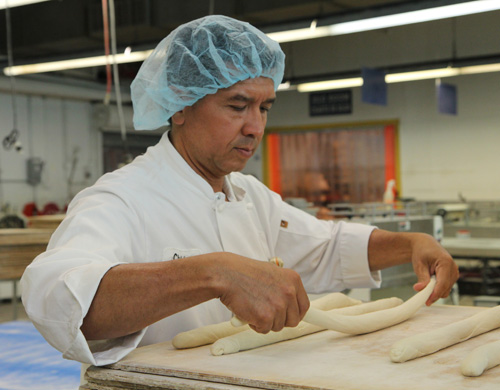 Photo by Nancy A. Ruhling
He likes to work the dough.

Once the family was reunited, his obligations increased when his second son, Hans, was born.

“One of my proudest moments was when I became a U.S. citizen,” he says. “It opened more opportunities for me here.”

After nearly a quarter century with Tom Cat, Chubby, supervisor of the day shift, still finds every day exciting.

Although he officially starts at 7 a.m., he usually is so eager that he’s at his desk at 6:30, checking emails about orders and jotting reminders in the little dog-earned notebook he keeps close to his heart in his vest pocket. 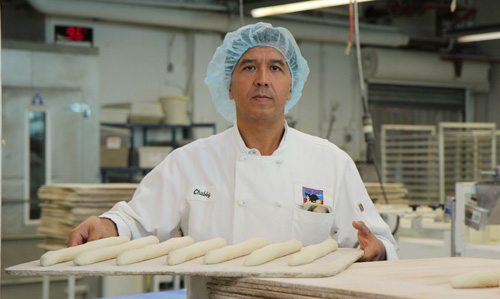 Photo by Nancy A. Ruhling
Chubby started out as a helper in 1990.

The desk work is OK with him, but he still loves the feel of the silk-soft flour sifting through his fingers and the push and pull of kneading the dough.

“I walk the floor and work for a couple of hours every day making and shaping the breads,” he says.

Sometimes, he stops to talk to Harry, who is working part time in customer service. 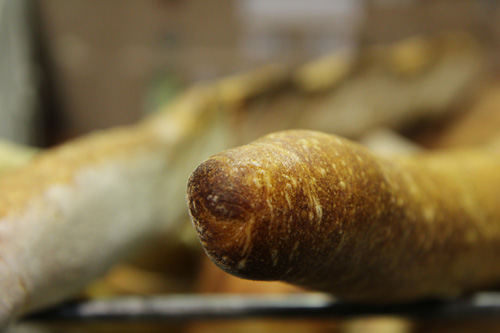 “I’m very happy,” Chubby says. “I thank God every day because I’m working and it’s at a place that I like. As long as Tom Cat is here, I’ll be here.”

He’s only 49, so he has hundreds of thousands of loaves to go before he can break bread. But when he does finish his final kneading, he thinks he’ll head to Florida, a state he’s visited many times. The warm climate reminds him of Ecuador and what might have been. 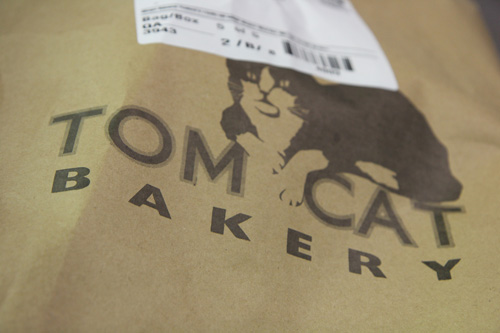 Photo by Nancy A. Ruhling
Tom Cat in and on the bag.

His musings are interrupted by Harry, who has popped into his office to ask a question. Chubby pulls up a photo on the computer. It’s of a doe-eyed, five-year-old Harry holding a Tom Cat baguette that’s almost as big as he is. It was snapped on one of the boy’s many visits to the bakery. 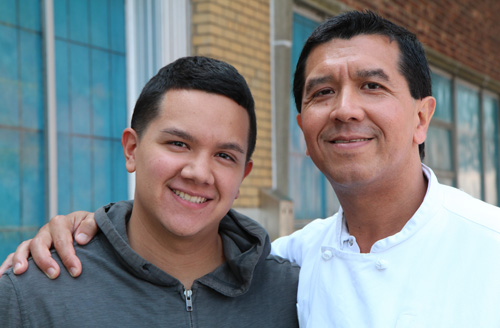 Photo by Nancy A. Ruhling
Chubby with Harry, his older son.

At 23, Harry is only three years younger than Chubby was when made his first loaf of Tom Cat bread. Chubby is proud to say that there has been no flour on his first-born’s hands and there will be none in his future. Soon, his boy will earn a diploma from John Jay College of Criminal Justice.

And that, Chubby says, has made every sacrifice he’s made in his life worthwhile.