With a pair of playful purrers padding at her sensible sandals, Sister Tesa heads to her office. The walls are papered with hundreds of snapshots of children, none of them her own yet all of them hers.

As solemnly as a Sunday-morning sermonizer, she recites their names. This is no mere exercise in rote-memorization even though some of their smiles have been frozen in place for nearly three decades. 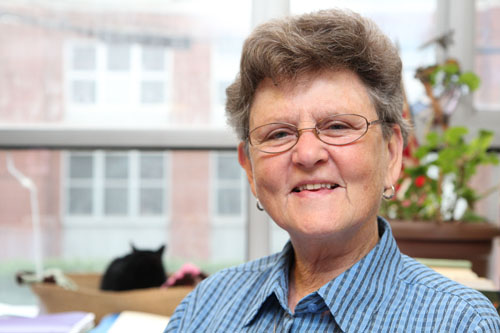 Photo by Nancy A. Ruhling
Sister Tesa is the founder and executive director of Hour Children.

“If I’m worried about any of them, I move their photo where I can see it,” she says.

There’s a crowd staring at her from her desk, where the cats, Richy and Romey, have planted themselves to help her file her papers with their swishing tails.

Sister Tesa, the founder and executive director of Hour Children, has good reason to be concerned. The people in the photos are the mothers and children her nonprofit helps get back on their feet when the women get of jail.

Sister Tesa, short of stature and tall of heart, is no stranger to hard times. She started out life as Teresa Fitzgerald and was raised on Long Island, where her Irish immigrant parents worked as servants on the great estates. She and her three siblings shared a cramped two-bedroom bungalow and wore thrift-shop clothes. 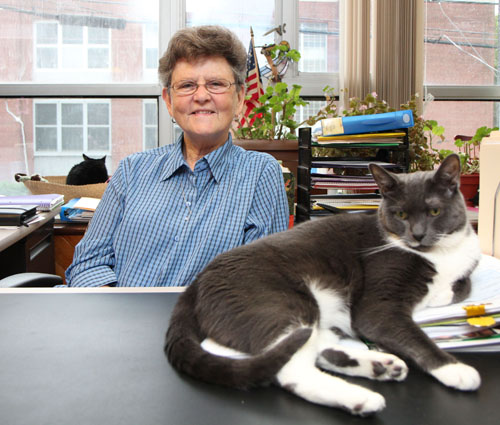 Photo by Nancy A. Ruhling
Sister Tesa with Romey and Richy, her little helpers.

“I had an empathy for the poor,” she says. “And I realized later that I was poor, but I never felt poor.”

She was sent to Catholic schools and by the time she was in high school, she knew she wanted to devote her life to God.

“I liked the idea of service,” she says.

At 17, she entered a convent in Brentwood, joining the Sisters of St. Joseph. The good sisters gave her a college education and sent her to teach in Puerto Rico then in several schools in Queens. Eventually, she became the principal of a Brooklyn school. 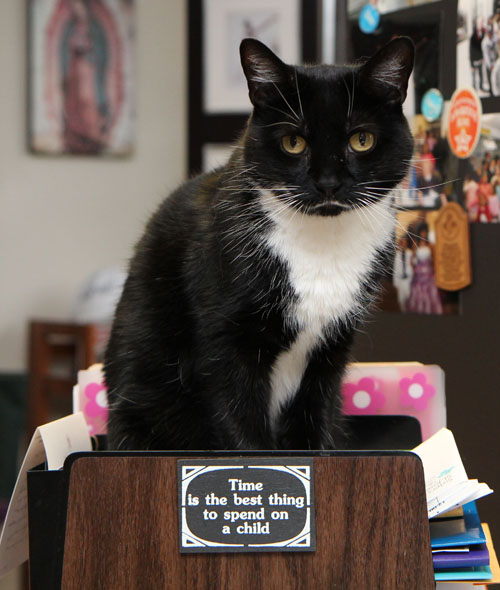 Photo by Nancy A. Ruhling
Romey takes a stand.

“It was right after Vatican II,” she says. “By the time I was teaching, nuns were wearing secular clothes, what we called ‘clothes of the city.'”

She loved teaching and had no intention of ever leaving the field, but God had other things in mind for her. She established Hour Children in 1986 after a sister nun invited her to join a movement to help those released from jail.

“Nobody was doing this at the time,” Sister Tesa says. “People could not understand why I was leaving education when I loved it so much.” 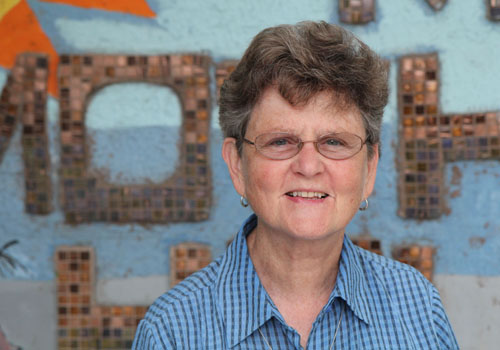 Photo by Nancy A. Ruhling
She’s devoted to God — and helping others.

But they had never met Nate, the 15-month-old girl Sister Tesa took in while her mother finished her jail sentence.

The mothers of children like Nate changed my heart. They never had a chance as children and wanted more for their own children. They had no experience with fatherhood — that’s another piece of their poverty — and they needed someone to believe in them.

Today, the group has developed a “village” sandwiched between the Ravenswood and Queensbridge Houses projects that includes two thrift shops, a food pantry, living space for 55 families, a licensed child-care center for the community, an after-school program, a summer day camp and a computer-equipped office where women recently released from jail are trained to re-enter the workforce. 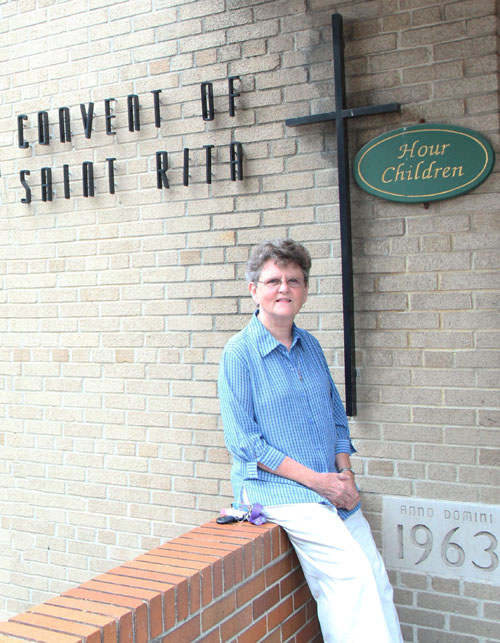 Photo by Nancy A. Ruhling
Hour Children was officially established in 1995.

There is much work to be done, which is why Sister Tesa greets her office cats at 5 a.m. and doesn’t give them a final pet until well near seven at night.

She lives in one of the communal homes, but her duties there are light: The cooking and cleaning are done by others.

Much of her day is spent visiting the Hour Children properties and programs. It’s slow going. She can’t walk down a single street without someone stopping to shoot the breeze with her. 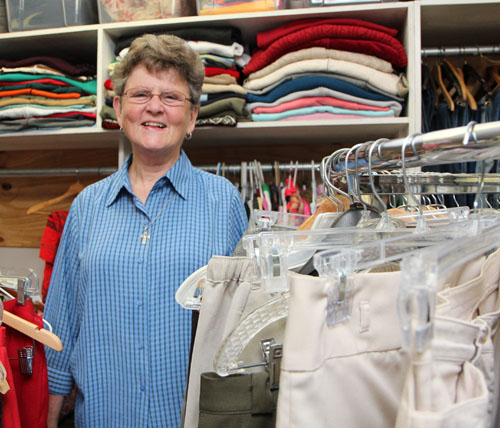 She spends her spare time with her own relatives, who include eight nieces and nephews and 13 grand-nieces and grand-nephews. It is their photos on the stand behind her desk.

“I don’t look at this as a seven-day-a-week job,” she says. “It’s a lifetime commitment.”

Although there’s no question of retirement, Sister Tesa, who just turned 67, is making plans for Hour Children to continue when she can’t. 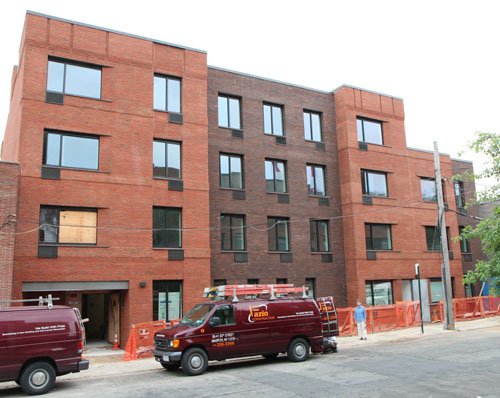 Photo by Nancy A. Ruhling
The new apartment building will house 18 families.

“I’ve been talking to people here about succession planning,” she says, “because I want it to continue to grow without me.”

Other communities have expressed interest in using Hour Children as a model for their own programs. The prospect thrills Sister Tesa because there are so many who need help. 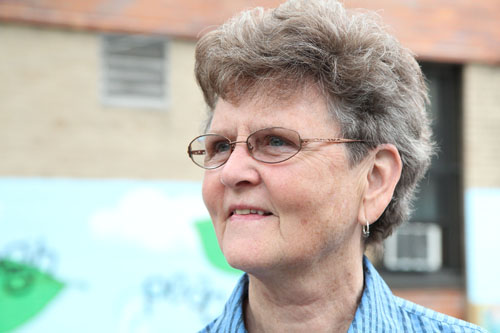 Photo by Nancy A. Ruhling
Sister Tesa has grand plans for Hour Children.

By 10 a.m., Sister Tesa has hit the street. She pays a visit to the Fancy Clothes Thrift Shop and stops to see the progress on Hour Children’s latest project, an 18-family apartment building across the street from the Convent of St. Rita.

With a determined look on her face, she stands in the hardhat area, seeing the red bricks that will replace jail bars. She’d like to buy the entire block. This is not a whim. She’s done some research and knows that the properties she wants belong to a single owner.

All she needs is $1.7 million. She chuckles and gazes toward God.