Attilio Poli is standing tall in the asphalt drive of his back yard. He’s gazing at his fig trees and grapevines, but there’s a faraway look in his eyes that takes him all the way to Venice.

He hasn’t stepped foot in the city of his birth for nearly a half century. At 93, he thinks about what might have been. 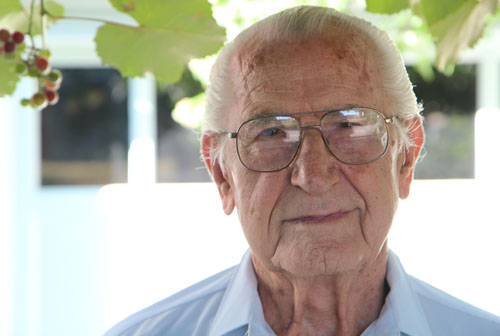 Photo by Nancy A. Ruhling
Attilio’s a very young 93.

“I cannot get my country or my people out of my mind,” he says. “My brothers and sisters are all dead. I’m the only one left.”

Attilio, who is slim, straight and silver-haired, is going to take the stairs back to the dining room because his long legs feel OK today. Usually, he ascends like a king in a power chair.

As he passes by the garage, he mentions his 1978 Cadillac, the one he recently gave to his grandson. Although Attilio hasn’t been able to see well enough to drive for years, he liked having it around. The empty space reminds him of the passing of time.

“It was a beautiful car,” he says. “The color was pewter.” 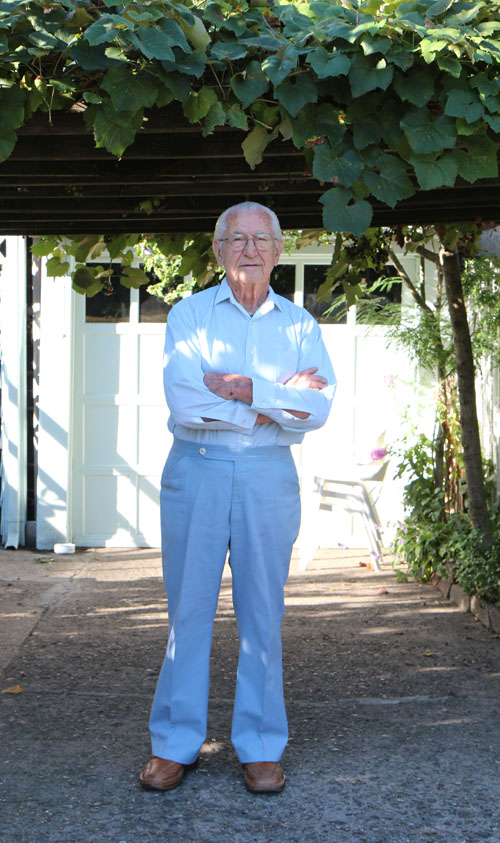 Photo by Nancy A. Ruhling
The fig trees and grapevines remind him of Venice.

Now if you want to see real beauty, he says, go to Venice. It has, of course, changed a lot since his youth. In those days, times were hard, especially for Attilio, who was one of seven children.

“We didn’t always have enough to fill our stomachs,” he says, “but we survived. We ate a lot of polenta.”

That’s why he was working full time in a shipyard when he was 14.

“I didn’t think anything of it,” he says. “Mostly everybody I knew went to work at that age.” 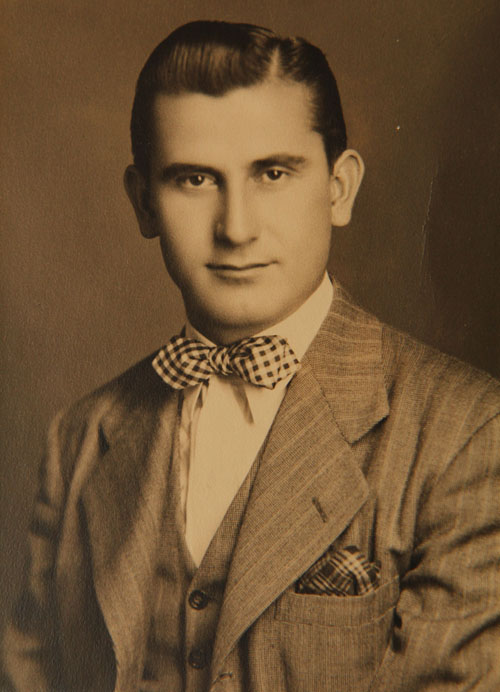 Photo by Nancy A. Ruhling
Attilio around the time he was courting his wife.

This was not to be a career by any means. His life, he knew, would be shaped by the country’s compulsory military service. In 1940, when he was called up, World War II was in full swing, and he was sent to a ship that laid minefields.

It was in the legendary, deadly German air raid on the Italian port of Bari, Europe’s “Little Pearl Harbor,” that Attilio nearly lost his life. When the bombs hit, 28 ships, including his own Barletta, went down.

“I had only minor injuries. I hit my head and fell on my buttocks,” he says. “But we lost 44 men. The upper structure of the ship was destroyed, and I carried people to the rescue boats.” 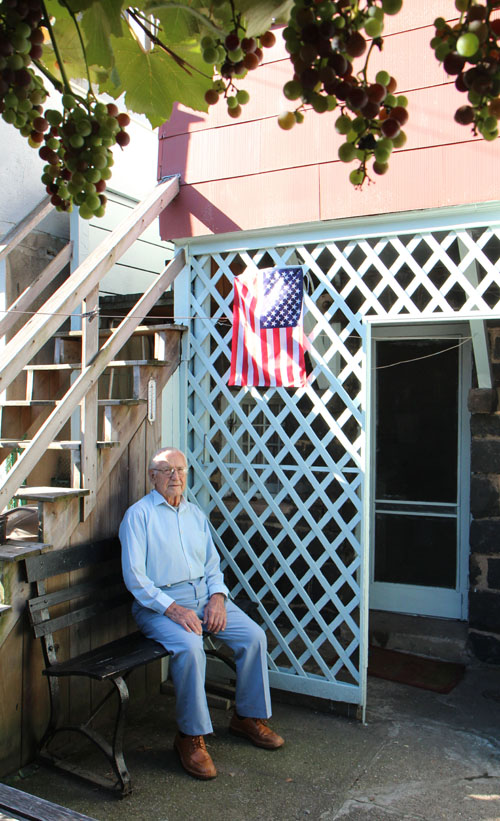 Photo by Nancy A. Ruhling
Attilio is proud to be a U.S. citizen.

When there was nobody left to save but himself, Attilio stripped off his heavy uniform and plunged into the icy water. The other two crewmen who remained on the ship strapped on lifesavers and floated, waiting for rescuers who would never arrive.

“The water was filled with mustard gas that had been on the ships,” he says. “I was covered with it and with oil. I’m a very good swimmer, and when I reached the shore, I jumped into a truck that was taking the wounded to the hospital. Lots of people died on the beach waiting for help to come.”

Temporarily blinded in one eye and “sick as a dog,” Attilio was not expected to recover. 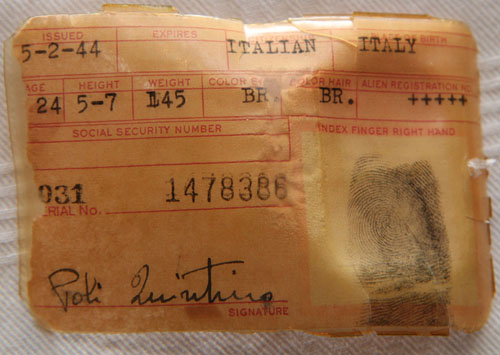 Photo by Nancy A. Ruhling
Attilio’s paperwork from the Sestriere.

“A priest was summoned to give me last rites,” he says.

He pulls up the shirt sleeve on his left arm.

“I still have the scar where my watch was,” he says.

After Attilio got out of the hospital, he was ordered back into battle. But when the Sestriere, an Italian cargo ship on its way to America, put out a call for signalmen, he cast his fate with it, arriving in New York City on May 2, 1944. 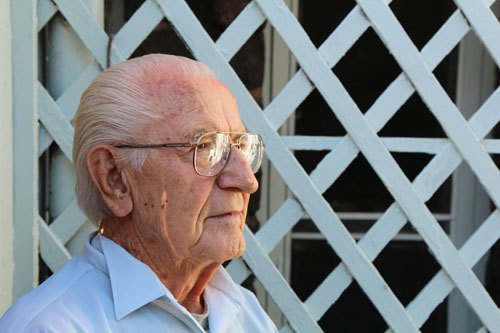 Photo by Nancy A. Ruhling
He takes things one day at a time.

“I deserted the Italian Navy,” he says. “I was always afraid to go back to Italy because of that.”

And there was no need to: Because of a communications snafu, Attilio had been declared dead. It would take him two years to clear up the matter and notify his grieving mother of the grievous error.

Once he came ashore, an employment agency got him a job in a restaurant, where he did everything from busing tables to making ravioli and hosing off the sidewalk. He spent the rest of his working life as a cook.

He learned his letter-perfect English in the movie theater and met his wife, Mafalda, when he was on his way to see a film. 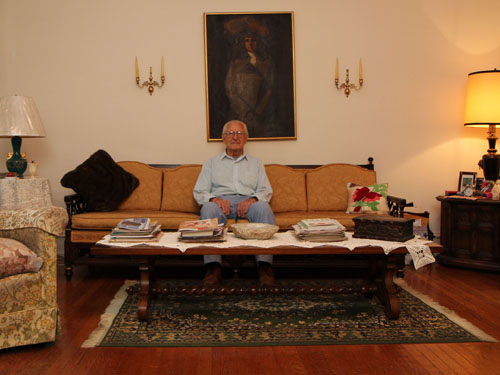 Photo by Nancy A. Ruhling
Life revolves around home and family.

“I had seen her earlier, but she didn’t pay any attention to me,” he says. “She was standing on the corner waiting for a friend. I was looking good. I had on a suit and bow tie, and I walked up to her and said, ‘Are you waiting for me?’ And she said, ‘No.’ I asked her to go for a walk, and we started seeing each other. We got married a year later. That was 66 years ago.”

Attilio and his “beautiful, quiet” bride moved into a three-room apartment in Manhattan that had no steam and no hot water. The toilet was down the hall. Eventually, they took over her parents’ apartment, which is where they raised their three children.

It took some doing — the Italian Consulate arranged it — but Attilio did become an American citizen, a fact that makes him proud.

In 1971, a year before the family came to Astoria, he took a trip to Venice. It wasn’t the same as he remembered, and he never went back. A couple of months ago, a nephew he never had met came to visit. It made him a little sad. 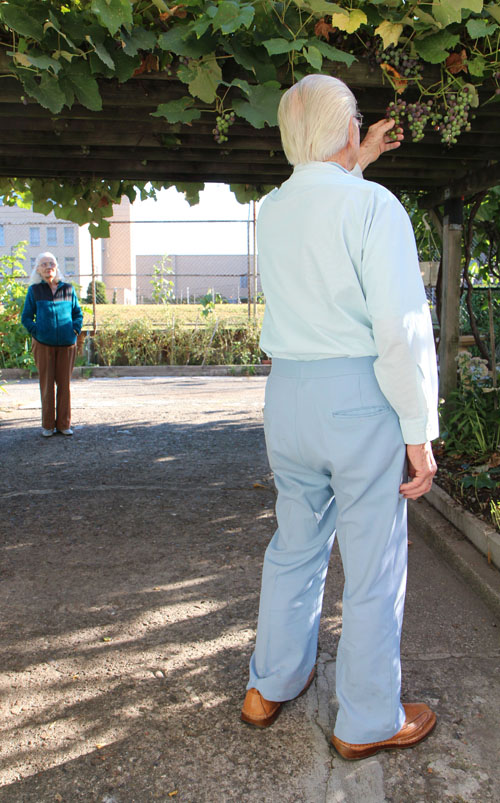 Photo by Nancy A. Ruhling
Attilio with Mafalda, who likes to stay in the background.

Time is taking its time with Attilio. He has a Pacemaker, and there is the macular degeneration that kept him from getting behind the wheel of that Cadillac. He no longer does the tango or foxtrot or goes to the opera. But he still sings the arias.

In the living room whose windows are covered by drapes Mafalda made decades ago, two recliners face the flat-screen TV. Life revolves around the small circle of his wife, his children, his five grandchildren and the senior group at Immaculate Conception.

He excuses himself for a moment. When he comes back, he presents a bottle of wine and a basket of figs and baby tomatoes he picked from his garden.