I’d like to tell you that I saw it shining in the light of the moon. That would be more romantic.

But it was in the glare of the pre-dawn streetlight that it caught my eye. I was walking my dog on Crescent Street at 5:30 a.m. on trash day, and it was out at the curb with the cans. 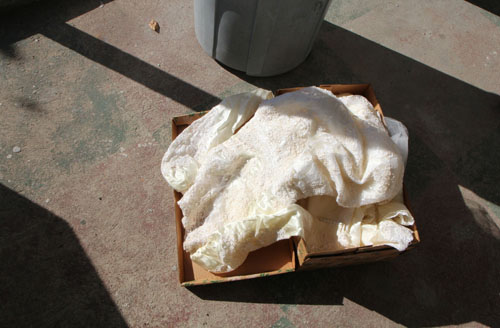 Photo by Nancy A. Ruhling
The boxed gown was at the curb on trash day.

I never would have seen it if the lid of the crude cardboard box that enclosed it like a casket hadn’t been lying on the side.

At first, I wasn’t sure what it was. As I moved closer, I realized that the sparkle was coming from a wedding gown. In the dimness, I couldn’t tell what it looked like or whether it was something old or something new.

I tucked the box under my arm and reverently carried it home. It was as light as a beating heart. 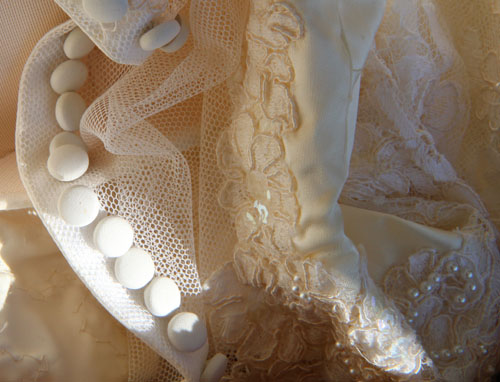 Photo by Nancy A. Ruhling
The beaded gown buttoned up the back.

When I opened it in the light, I discovered that it contained not only a size 4 sequined and pearl-beaded gown with 29 baby buttons down the back but also a detachable silk train, a veil, a heart-shaped pillow with a tiny brass ring, two frilly garters (one blush pink, the other virginal white) and fragments of silk-flower bouquets.

And that pretty much would have been the end of the story except that hidden under all the decaying Miss Havisham tissue paper was a single unaddressed ecru envelop.

Inside, an invitation announced in scrolling script that one Helen, of Crescent Street and a long Greek name, and one Demetre, of a short and simple surname of the same ethnicity, were to be united in matrimony on Sunday, the fifth of October, 1986 at 6 o’clock at Saint Katerine Church on 33rd Street in Astoria. The newlyweds invited everyone to toast their blessed union at 8 that night at a reception at a catering hall in South Hackensack, New Jersey. 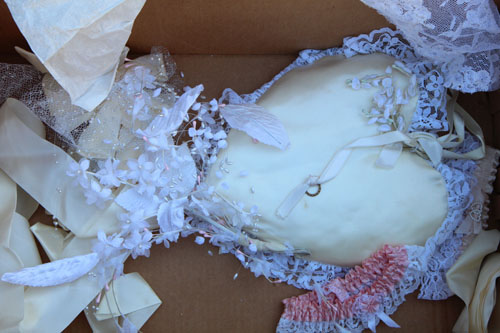 Photo by Nancy A. Ruhling
The box also contained a heart-shaped pillow, garters and bouquets.

Intrigued, I decided to try to track down this couple; a cursory internet search told me they still lived in Astoria, around the corner from the Crescent Street apartment house, which apparently is still owned by her family. So I called Helen and told her I had her wedding gown.

She was eager to get it back, but she didn’t tell me how or why it got out on the sidewalk. I offered to hand-deliver it to her doorstep, but she told me to leave it where I found it. I told her I would put it on the porch, not at the curb.

I would have liked to tell the story of Helen and her errant dress, but it was not to be. Perhaps it’s better this way; a bit of mystery makes better fantasy. 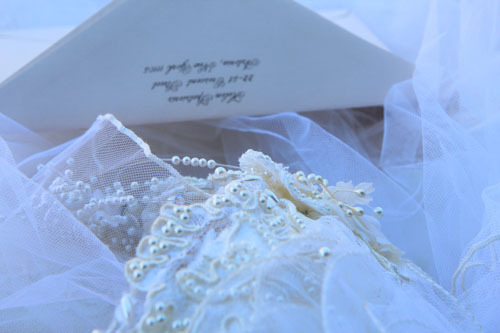 So I can only speculate about what happened after Helen walked her dress down the aisle 27 years ago this week. I’d like to think Helen and Demetre lived happily ever after. I’d like to give them a couple of kids and a handful of grandchildren. I’d like to present Helen with a pearl necklace on her 30th anniversary.

The true course of their love and their lives doesn’t really matter; it’s how the gown got in the trash that I’m most curious about.

Did a middle-aged, mature-figured Helen wake up one day and discover that the gown didn’t fit her any more and, in disgust, decide to discard it? 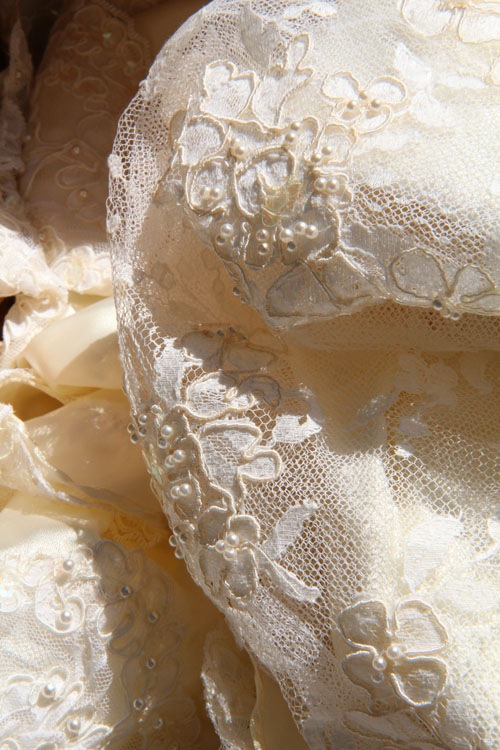 Photo by Nancy A. Ruhling
The classic gown was in nearly perfect condition.

Did some new tenant clean out the apartment house’s basement and toss it out without even looking inside?

Or is this how it always ends up — sentiment is cast aside when the blush is off the bride?

In the end, I guess it doesn’t matter. 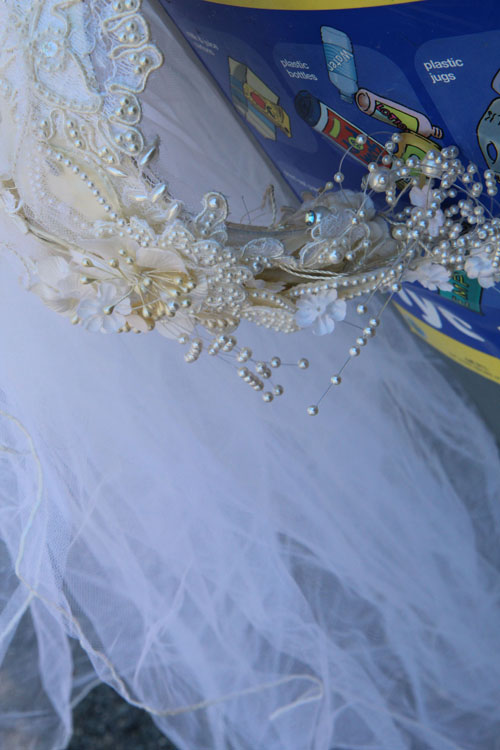 Photo by Nancy A. Ruhling
Back in the closet or back in the trash?

I put the box on Helen’s porch with a sense of sadness for loves long past.

I hope she does come to pick it up, and I hope the daughters and granddaughters my imagination has given her get to wear it someday.