Sometimes it takes a long time to figure out who you are and who you want to be. 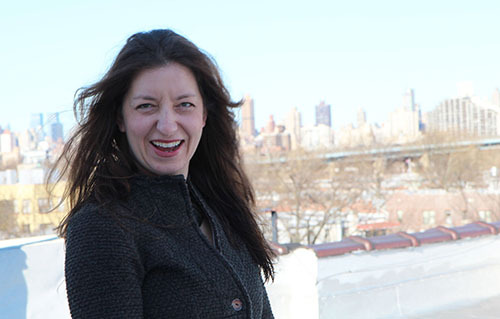 Photo by Nancy A. Ruhling
Juniper started drawing as a child.

For Juniper Foster, this is a very welcome work in progress. 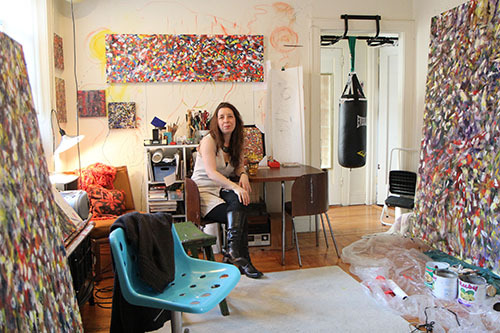 Photo by Nancy A. Ruhling
Juniper’s living room serves as her studio.

This is something she gets to do a lot because she paints in the cramped living room of her one-bedroom apartment.

Her abstract canvases, emotive, spur-of-the-moment riots of color, hang or lean on the white walls or rest on easels, creating a stirring and singular gallery of her subconscious mind.

Other works, most of them on paper, line her bedroom walls. 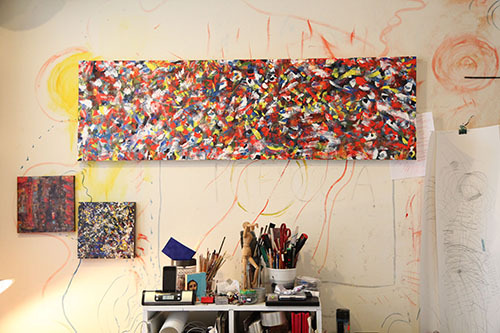 Photo by Nancy A. Ruhling
Juniper’s works are riots of color.

Juniper, who has long brown hair, brooding grey eyes and a sober smile, has always been creative. She was forced to be.

She was born and raised in Hadlyme, Connecticut, a town with a ferry and a castle that she describes as insulated and isolated. 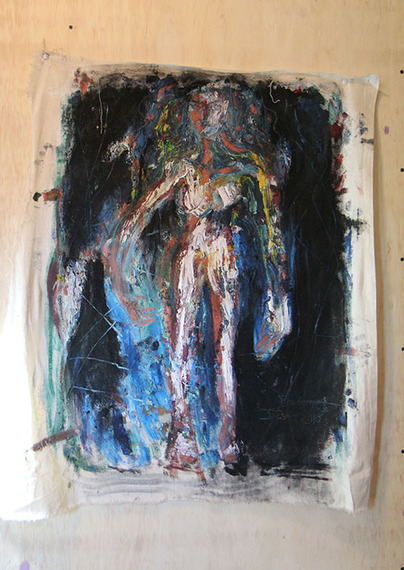 Photo by Nancy A. Ruhling
An early work that inspires Juniper.

Art provided her with a fun and quick way to pass the time, and she exhibited her first painting at 14.

She was so bored that she started working that same year.

Her first job was in an antiques shop, where her duties included beating rugs, a chore that she grew to be rather fond of.

Her mother, a potter, and her father, a stained-glass artist, had moved there from Manhattan shortly before the birth of her older sister.

When Juniper was 2, they separated, and her mother struggled to pay the bills while raising two daughters and leading an artistic life. 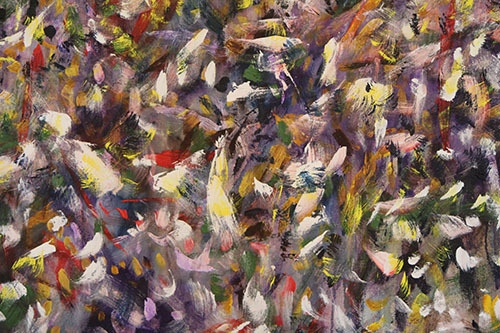 Photo by Nancy A. Ruhling
Juniper’s works are layered with meaning.

“We lived out in the middle of nowhere,” she says. “My dog was my best friend, and painting became a form of liberation.”

It also was an escape, which is something Juniper didn’t get to actually do until she went to Goucher College in Baltimore. 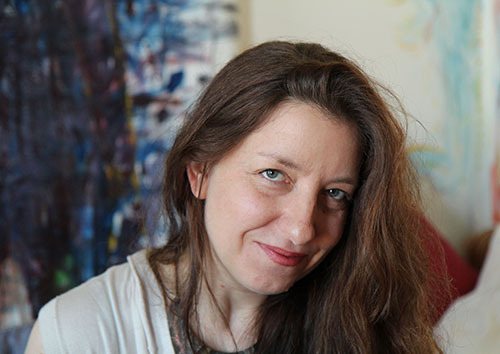 Photo by Nancy A. Ruhling
She paints after finishing her 9-to-5 jobs.

After earning a degree in fine art, Juniper jumped coasts and headed to Los Angeles, ostensively to visit her sister but more to have an adventure.

Her stay stretched to two years, and during that time, she continued to draw while she worked as a freelance production designer for low-budget films and photo shoots. 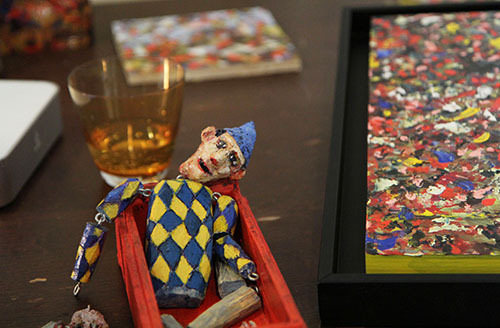 Photo by Nancy A. Ruhling
She’s playing with 3-D works.

She returned to New York to study acting, which she had discovered during high school, and bounced from freelance job to freelance job until a head-on car collision put her out of commission.

“I had a broken wrist, but my mother, who was driving, had to learn to walk again, so I kept going back to Hadlyme to take care of her,” Juniper says. “It was like revisiting my childhood.” 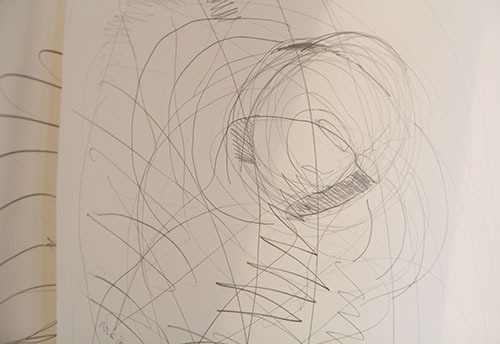 Photo by Nancy A. Ruhling
Swirls of emotion.

Around that time, she moved to Astoria and immersed herself in the arts. For seven years, a modest insurance settlement and scrimping and saving allowed her to follow her heart.

When the money ran out nearly three years ago, she started juggling jobs.

Things might have stayed the same had she not stepped into an elevator and met an artist named Harry Folsom, who invited her to show him her work. 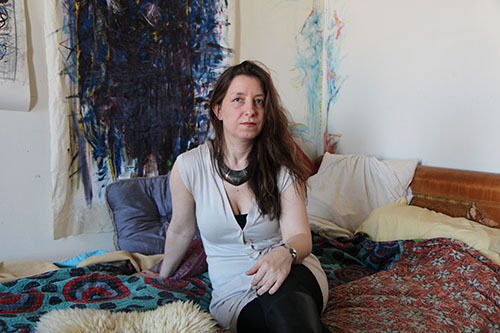 Photo by Nancy A. Ruhling
Her second gallery is in her bedroom.

“It took me a while to get up the courage to do it,” she says. “One of my works, the one I almost forgot to show him, brought him to tears.”

With that validation to spur her, Juniper began creating works for her first solo show, Emerging Worlds, which runs through April.

“Having 37 of my paintings in one place is a great gift,” she says. 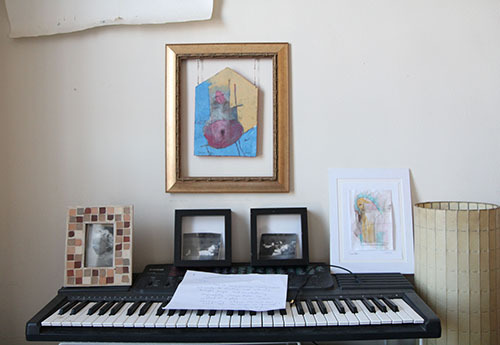 Photo by Nancy A. Ruhling
A real-life still life.

Juniper’s abstract canvases, cerebral and spontaneous, are layered with meaning, images and texture, allowing viewers to see and feel what their eyes and minds desire.

“I don’t want people to understand my work,” she says. “I want them to experience it.” 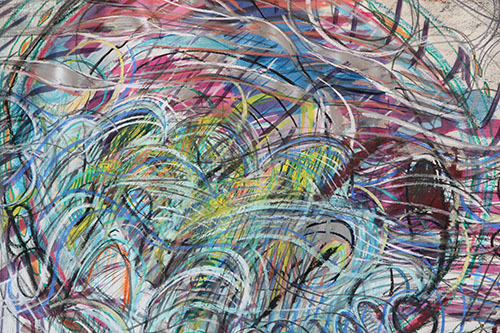 Juniper doesn’t plan a painting so much as let it lead her where she and it end up.

“My process is dangerous,” she says. “I strive for an unencumbered aliveness. I pick a color and try not to think too much. I try to feel the color, and I try not to get too attached to what it is. I go into a place where anything can happen; I never know how the painting is going to turn out.” 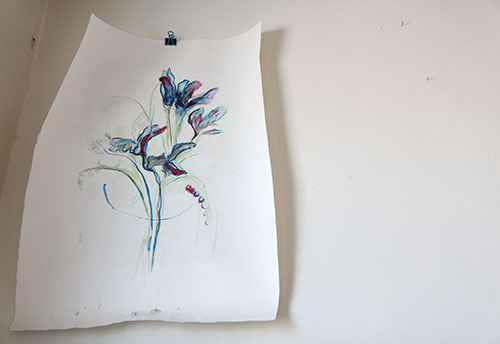 Photo by Nancy A. Ruhling
A work in progress on paper.

Or, for that matter, when it will declare itself finished.

“My works are vibrant yet fragmented,” she says. “They are complete yet mysterious and dreamlike. It breaks my heart sometimes that the first layers are mostly hidden at the end, but I leave viewers a trail of clues so they can perhaps feel some of what I felt as I painted.” 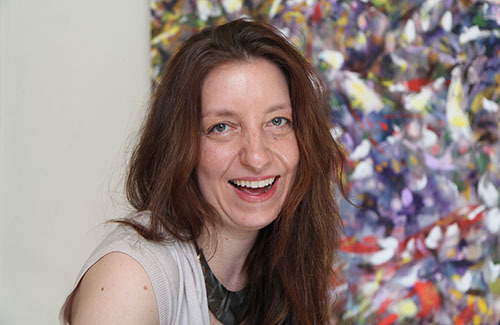 Photo by Nancy A. Ruhling
She’s excited about the show.

And what she feels stems from who she is: a woman, a Jew, a child of a broken home, a sensitive human being and most of all, an artist.

Right now, Juniper reserves her painting for the evenings that sometimes stretch to dawn. 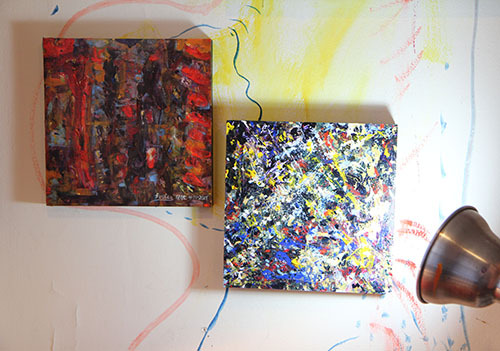 Photo by Nancy A. Ruhling
Emerging Worlds runs through the end of April.

But someday, she hopes to have the luxury of being able to pick up a brush any time she feels like it.

“I want to make this my career because it is how I express myself,” she says. “I’m painting some large pieces that reach the ceiling of my apartment, and I’d like to get a studio to do even larger ones.” 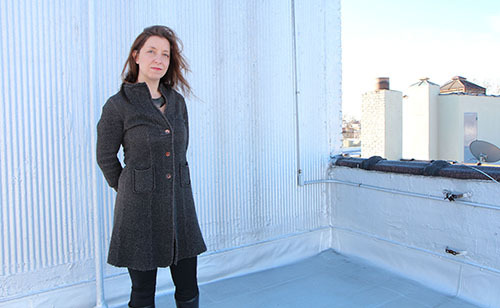 Photo by Nancy A. Ruhling
Portrait of an emerging artist.

Regardless of where her art takes her, Juniper and her brushes are prepared to make the journey.

“It’s not like I’m going to stop painting,” she says.