Ellen Evans climbs the three flights of stairs to Terrafirma, her pottery studio, balancing four cups of steaming coffee and a brown paper bag of doughnuts. 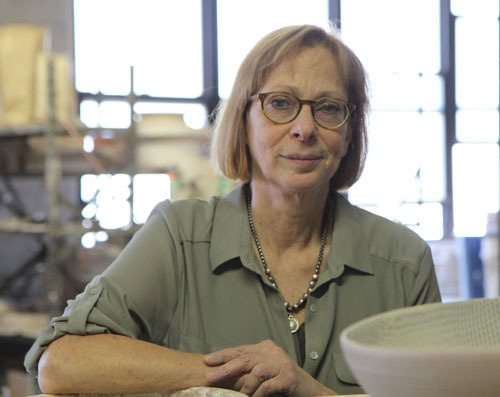 Photo by Nancy A. Ruhling
Ellen opened the Terrafirma pottery in 1980.

As she has done every day for the last dozen years, Ellen, a woman of slight stature and sturdy hands, unlocks the metal gate and rolls it up like a window shade, revealing the 5,000-square-foot work space that has come to be her second home.

It is not a pretty place. For this, Ellen makes no apology. Pottery molds are stacked on ceiling-high shelves, the sink is bathed with splattered clay and there’s a fine coat of snow-like dust everywhere. 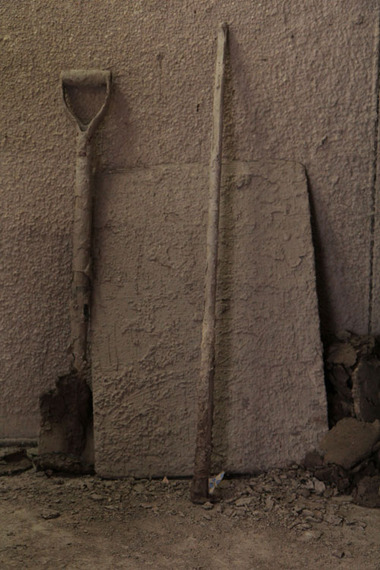 Photo by Nancy A. Ruhling
A serendipitous sculpture in the studio.

From this Pompeii valley of ashes rises a brawny beauty of great daintiness that is the product of Ellen’s singular vision.

Ellen, the daughter of Russian immigrants who settled in Manhattan where she was born and raised, officially opened Terrafirma in Manhattan in 1980, a couple of years after she graduated from the University of Michigan, and moved the pottery to Astoria in 2001.

It wasn’t what she thought she was going to do. She had planned on a career in archaeology, but she got hooked on ancient art instead.

“Music always was the drumbeat of my family,” she says. “But I gravitated toward the visual arts. I took pottery classes in college then started teaching it privately.” 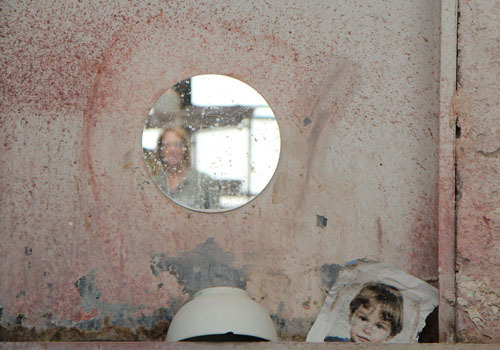 Photo by Nancy A. Ruhling
Ellen reflected in the mirror above the sink.

Ellen’s first pieces were large, elaborate urns influenced by the Minoan and Mycenaean designs she had studied. Eventually, she shifted to the tableware and accessories that have become her hallmark.

“My pieces are strong and functional because they are made of clay,” she says. “But they look delicate because they are covered with a layer of porcelain, and their lacey-like patterns are made by painting through vintage fabrics that I travel all over the world to find.”

The signed and dated pieces take at least a week to make, and Ellen and her eight employees generally produce close to 8,000 per year. 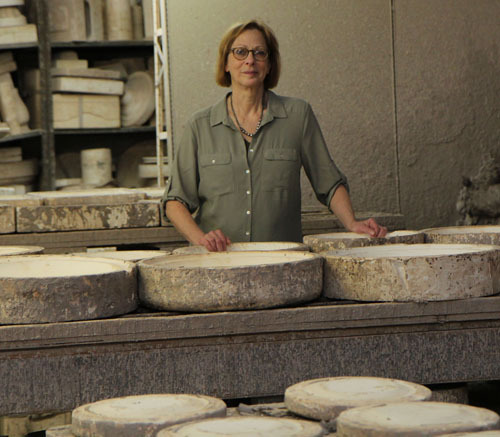 Photo by Nancy A. Ruhling
Ellen with some of the pottery-plaster molds.

It’s a long, labor-intensive process. Clay powder manufactured to Ellen’s own special formula and water are dumped into a mixer the size of a washing machine that churns them until they look like melted milk chocolate. Workers with Popeye arms pour this soup into hefty water-absorbing pottery-plaster molds, cover them with sheets of plastic and leave them to dry overnight.

The pieces that ultimately become plates, platters and pitchers are then shaped and tooled on a potter’s wheel and hand painted with a coat of porcelain. Colors and patterns are applied to this “sandwich,” which is left to dry for up to six days. 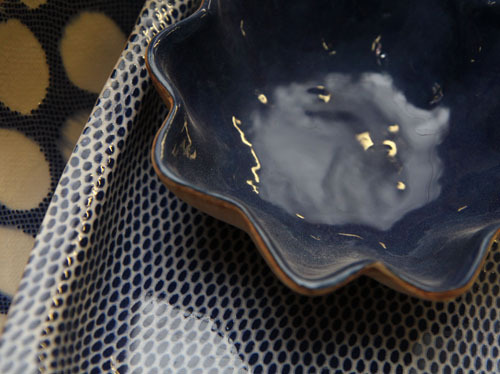 “You can’t rush ceramics,” she says. “They crack or break if you do things too quickly.”

Although Ellen, a self-described “hands-on” potter, is involved in every aspect of production, designing is her favorite part of the process.

“I love putting the patterns together,” she says. “There’s not a moment when it’s not exciting. We always have a lot of fun.” 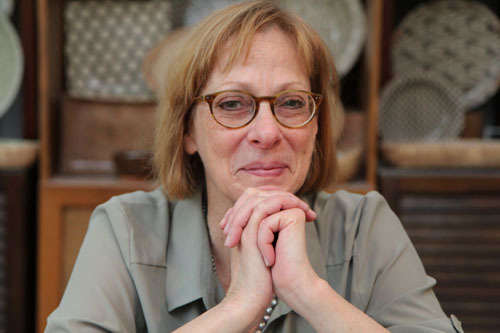 Photo by Nancy A. Ruhling
Ellen’s a hands-on potter.

It’s not unusual for Ellen to be at the studio six days a week. She’s not the first one in. Six a.m., the opening time that’s right for the kilns, is a little too early, considering she often works into the evening. But after more than three decades, she’s trying to cut back.

Her husband, who ran the business end of the studio, died four years ago. She went through a tough spot until she hired a replacement.

She’s hoping her daughter will someday join the company. 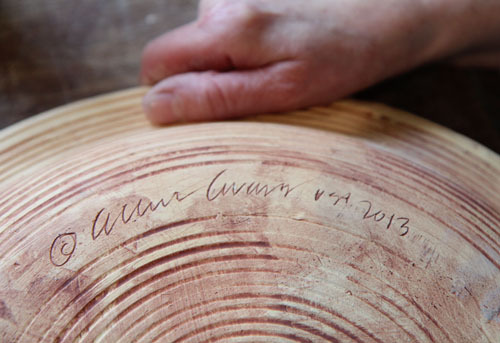 Photo by Nancy A. Ruhling
Terrafirma’s pieces are signed and dated.

“She practically grew up in the studio,” Ellen says. “She’s in college studying writing, but she really enjoys selling. I would love it if she came.”

It’s time to open the kiln. This is something Ellen has done tens of thousands of times, but the fire is fickle. Sometimes it manufactures destruction. 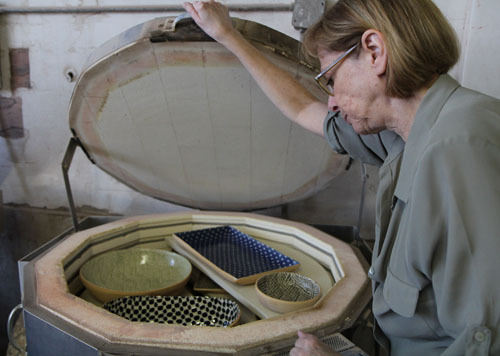 Photo by Nancy A. Ruhling
The pottery packed in the kiln.

There aren’t many potteries left in New York State, and among the few in New York City, Terrafirma is the largest.

“I’m very proud of the fact that our pottery is made right here,” she says. “I like the idea of creating things that people use and love.”

She opens the lid of the circular kiln, which looks like a dishwasher on steroids, and smiles. The gods has been kind this time. All the pieces are intact.