It happened at a summer camp in the Catskills.

It’s where Mike and Allison Hayhurst met; it’s why they share the same surname. 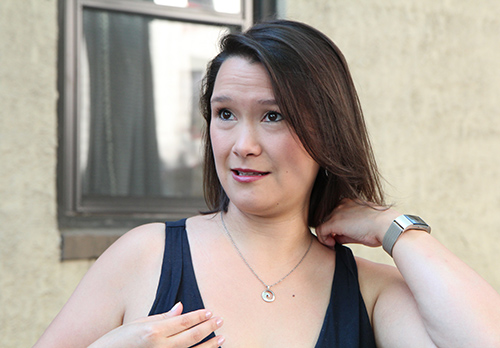 Allison, who doesn’t have a Southern accent, is from Alabama.

Mike, who is from Leighton Buzzard, England, was teaching theatre there.

So was Allison, who was from the other side of the Atlantic Ocean, specifically Huntsville, Alabama. 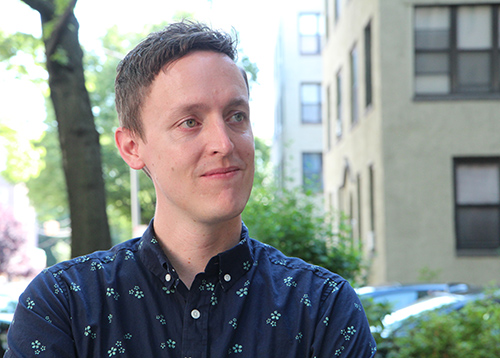 Allison: “At the last minute, a friend asked me to design costumes for Grease. It was just for three weeks, and I thought, ‘It’s not gonna change my life.’”

He, who is all straight lines, grins like a Cheshire cat. 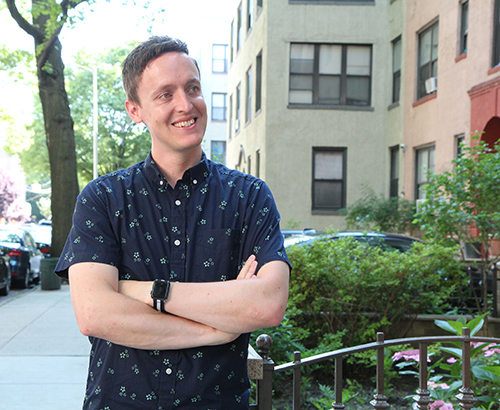 Mike is a producer and director for theatre and film.

She, who is all C and S curves, doesn’t react.

Mike: “I know you still don’t believe me, but the first time I saw you, I just knew you were an incredible person.”

As it happened, Mike and Allison performed in the staff’s improv comedy show. Afterward, they chatted at a bar while celebrating her 21st birthday. The conversation has never ceased. 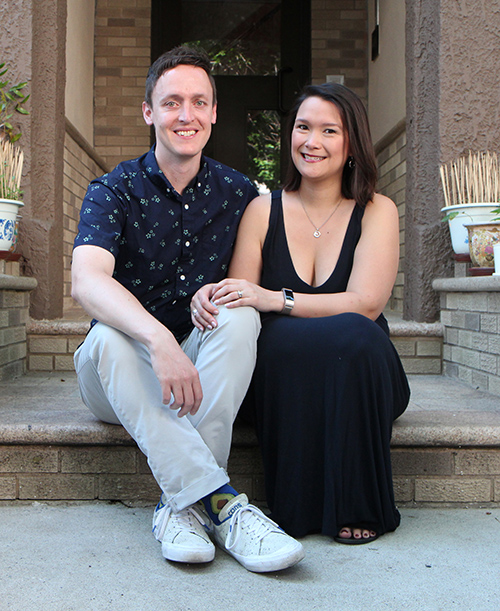 Two years ago, they set up a production company, Evening Squire.

Mike: “I used the show as a ruse to speak to you. I kept thinking, ‘Why would she pay attention to me?’”

Allison: “I was attracted by the accent; I didn’t know I loved you for quite some time.” 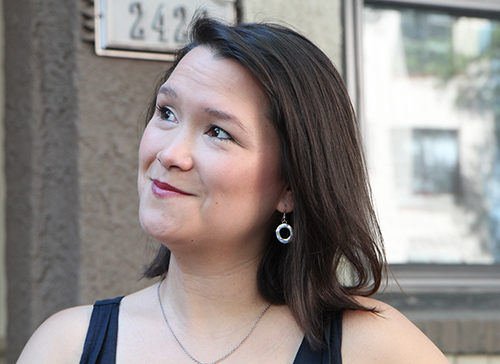 OK, it wasn’t quite that cut and dried; she cried when they parted.

Allison: “I knew he was staying in the United States an extra two weeks, so I used the money I earned at the camp to buy him a plane ticket to Alabama.” 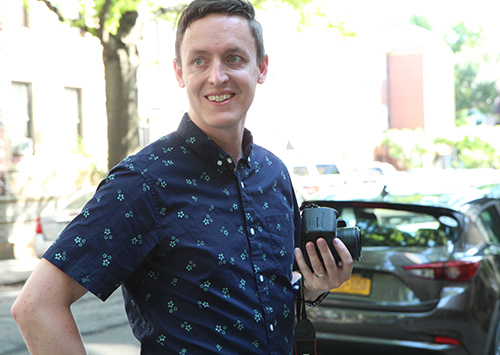 Allison: “I barely had enough money to cover it.”

Mike: “I couldn’t believe she paid for it.”

That was in 2007, and they have been united, in life and in art, ever since. For the first couple of years, they had a long-distance romance, visiting each other for a week every couple of months.

Right from the start, it was obvious that they were committed to each other. 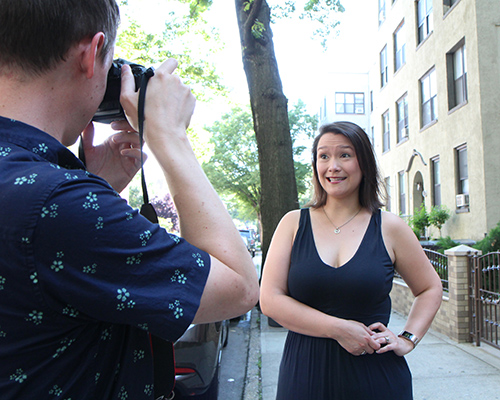 The first year, Mike even cooked Allison a Thanksgiving dinner. He had to do a lot of recipe research because England doesn’t celebrate the holiday. They agree that the meal was as exceptional as the company.

Mike, who has a bachelor’s degree in drama from England’s University of Northampton, stayed in that regional-theatre-centric town as a director, a role he relished because “I enjoy crafting stories.”

Allison, meanwhile, completed her bachelor’s degree in theatre and psychology at the University of Alabama as well as an acting apprenticeship in Louisville, Kentucky. 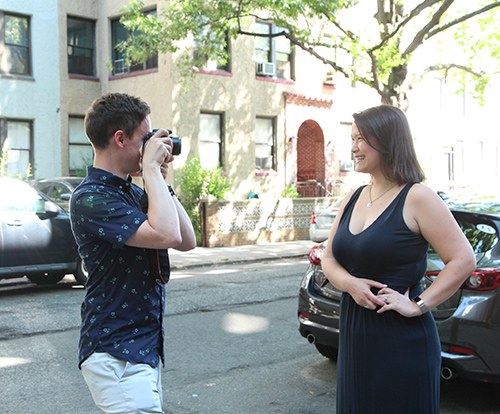 In 2009, Allison moved to Astoria to pursue an acting career. In April of that year, Mike showed up on her doorstep with a diamond engagement ring.

Allison: “He came unannounced and got down on one knee.”

Mike: “She didn’t answer for a long time.” 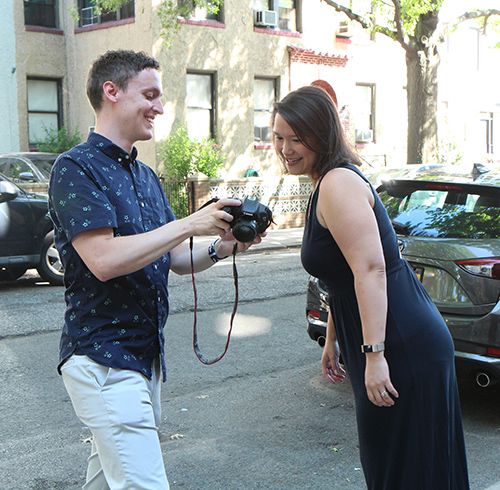 Allison: “I screamed, ‘What are you doing here?’”

She pauses, just as she did when he popped the “marry me” question.

Allison: “It didn’t compute in my head because I had just talked to you on the phone, and I thought you were in England.” 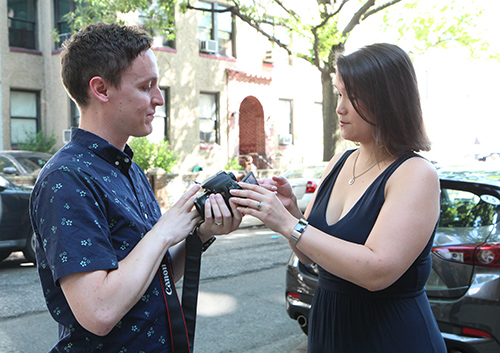 Mike: “Proposing that way was a reckless thing to do. Within a week, I had spoken to her Dad, bought the ring and got on the plane. I’m usually not that impulsive.”

He laughs; like a take in a movie, he’d do it over and over again to get it right if he had to.

In January 2010, Mike moved in with Allison. They were married in February 2010 in a sunset ceremony in Long Island City.

Allison: “The longest time we had ever spent together was three weeks.”

Mike: “We chose to stay in New York because we were both pursuing careers in the theatre so it made sense.”

For the last three years, Mike has been a freelance producer and director for theatre and film, and two years ago, they established their own production company, Evening Squire. 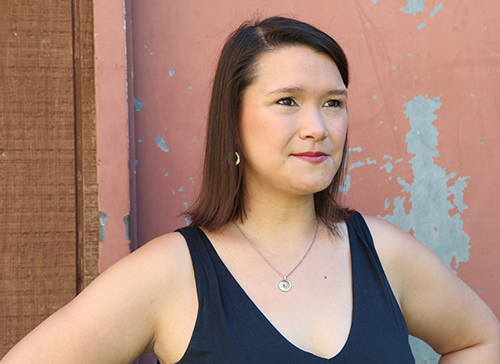 Allison is the screenwriter for their next film, 15 Down.

Allison, who kept her day job in the advertising technology industry, also learned the art of puppetry, which came in handy on The Pits, an award-winning short film about an avocado in Astoria searching for his other half.

She pulled the strings on a pair of bananas that split and a flying leaf; Mike acted as the director and cinematographer.

Their next film, 15 Down, which is centered on three generations of women living in a biracial household in the South, will be released early next year. Written by Allison and directed by Mike, it runs 15 minutes; it’s longest they have done. 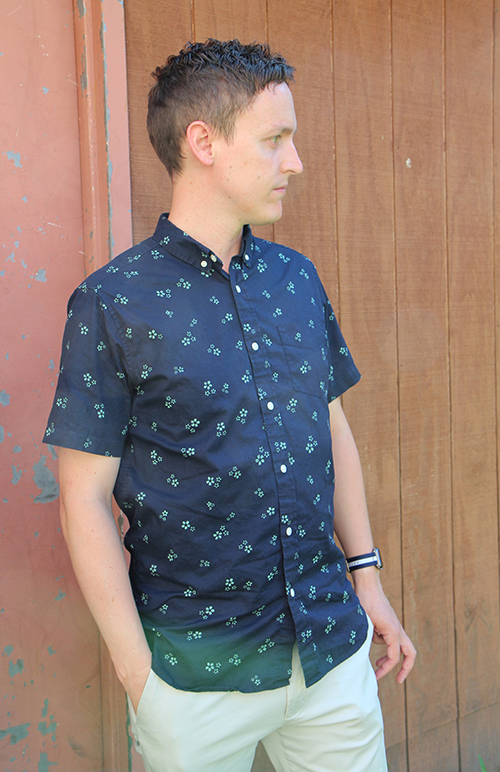 Mike, thinking of his next film.

They also have what Mike calls a “quirky zombie romantic comedy” in the works.

Allison: “We love to make stories that seem small but that hit universal themes that everyone can relate to.” 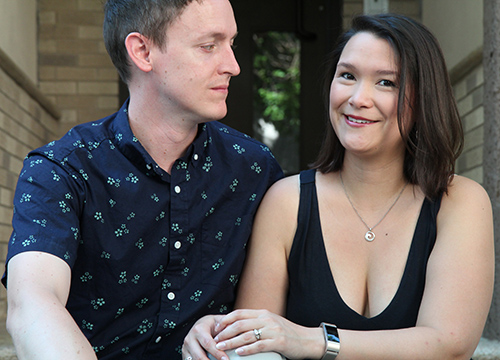 Mike and Allison worked on the award-winning short film The Pits.

Mike: “That’s what The Pits is about — loneliness and searching to complete yourself. The theme is about trying to find a connection.”

Just like the one Mike and Allison made at that summer camp all those years ago.