When he reaches the end of the dark, tunnel-like hallway, Kenny Greenberg switches on the signs. 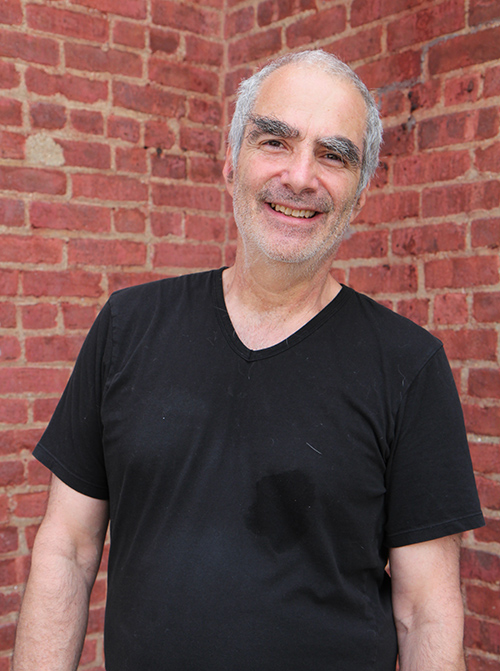 Kenny is the owner of Krypton Neon. 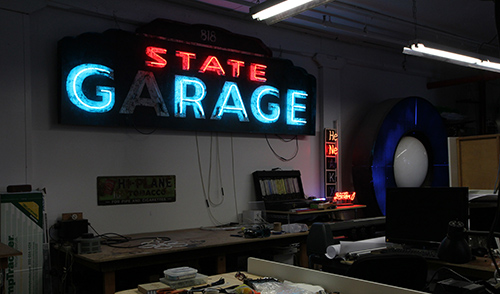 Beacons in the blackness, they blink their eyes open, one by one, bathing the studio in the soft glow of history.

Neon signs debuted 108 years ago, and for the last 38 of them, Kenny and his Krypton Neon studio have been an integral part of their illuminating story.

Kenny, a lanky man with eccentric eyebrows that frame his face like baby bird wings, styles  himself as a neon, light and technology artist. 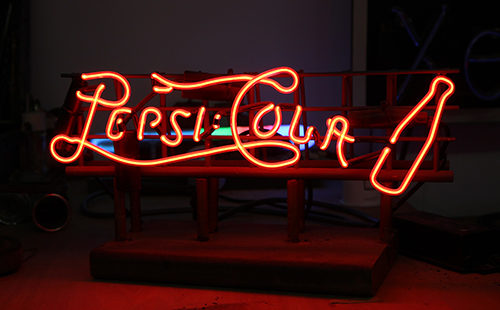 He was raised in Flatbush, Brooklyn and Englewood, New Jersey, and spent his childhood drawing cartoons and tinkering.

He noticed the large neon signs of Long Island City when he accompanied his father, a color chemist who toyed with the tones of crayons and Play-Doh, to work.

“My parents made it clear that being in the arts was not practical,” he says. “I was told I was going to be an engineer.” 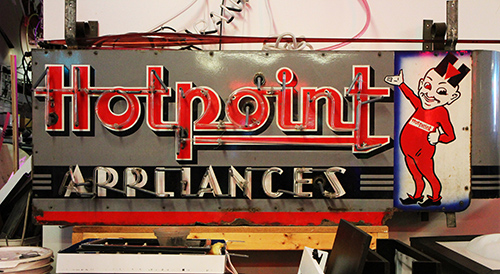 He set out to do just that, studying the field at Columbia University.

“I was instantly miserable,” he says. “It wasn’t me. I walked out in the middle of midterms.”

While he was deciding what he really wanted to do, he transferred to liberal arts, where he traded his Cs and Ds for straight As and a place on the dean’s list. 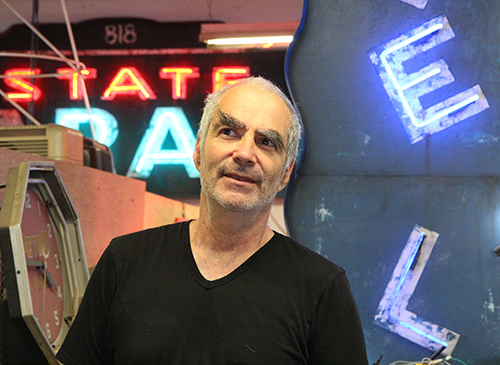 For Kenny, neon work is the perfect intersection of art and science.

For the next decade, he worked in the child-care field, where he held supervisory positions and created programs for emotionally disturbed youngsters. 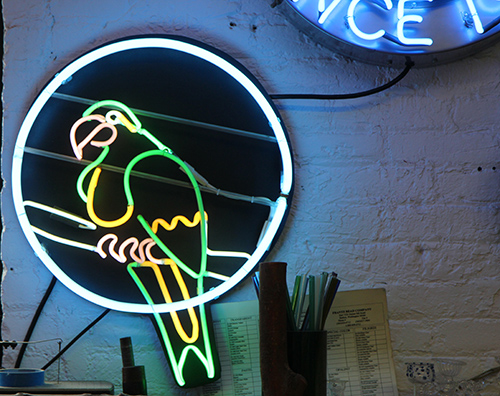 Krypton Neon does work for TV shows, movies and Broadway.

The thing was, he wasn’t sure exactly what his creative urge was or what it was urging him to do with his life. 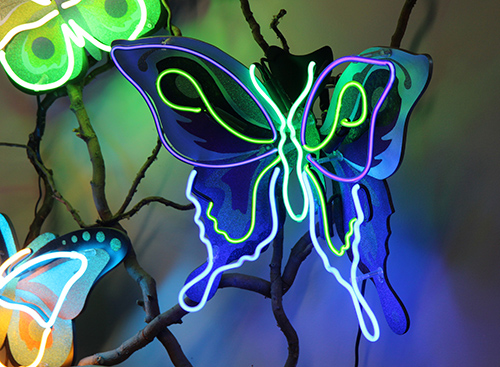 Neon wasn’t even on his radar when his then-girlfriend showed him a couple of ads for classes.

It was a revelation, he says, to learn that “human beings make neon.” 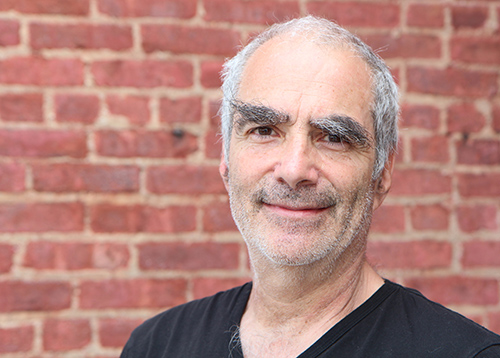 Kenny had a career working with emotionally disturbed children when he switched to neon.

The science and art of bending thin glass tubes and filling them with the inert gas appealed to him, and after learning the technique from the New York Experimental Glass Workshop, Kenny set up part of his Tribeca loft as a neon studio.

“Converting matter to energy is magical,” he says. “I love to see the natural light that comes from the pure atoms themselves.” 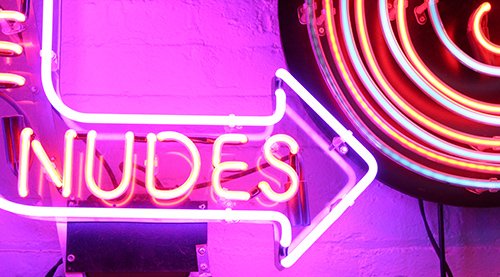 A year later, he opened Krypton Neon in Long Island City, where he lives.

“I chose that name because I loved Superman comics as a kid, and krypton is one of the rare gases we can use,” he says. “It’s a beautiful and subtle color that is used by only a handful of neon artists. I also like the contrast between its soft white-lavender color and the blazing red of neon.” 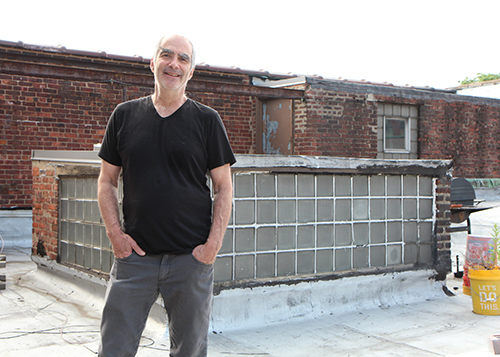 Kenny’s neon scenic and environmental art pieces have been in Broadway shows (Hairspray, Mamma Mia!, In the Heights, Jersey Boys, Grease and SpongeBob SquarePants: The Broadway Musical), TV shows (Saturday Night Live, The Tony Awards, The Emmy Awards, The Marvelous Mrs. Maisel, Sesame Street, and ABC, CBS and NBC News) and Hollywood movies (Men in Black I and II, The Producers, Dead Presidents and I Don’t Know How She Does It).

Kenny also has done work for a number of corporate clients, including Macy’s, Disney World and the New York Stock Exchange, and has restored and installed pieces for numerous museums, notably MoMA, PS 1 and the Queens Museum. 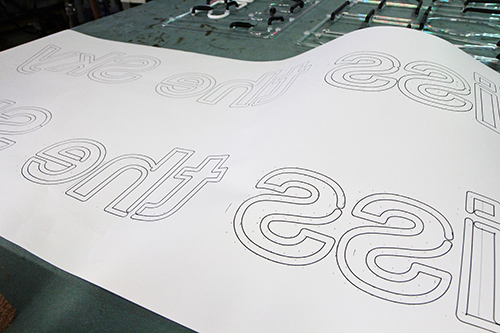 The glass tubes are bent to follow to-scale paper patterns that are printed backwards.

Krypton Neon’s signs illuminate the city’s storefronts; Milkflower pizzeria in Astoria is one of Kenny’s clients.

“They wanted the sign to look old,” he says. “I aged it with artificial rust and decay and beat it up with a hammer. I did such a good job that the website Forgotten NY featured it.”

Kenny also has collaborated with artists like Doug Aitken, Matthew Day Jackson, Carsten Holler and Terrence Koh, and his own neon works have been featured in art shows and galleries. 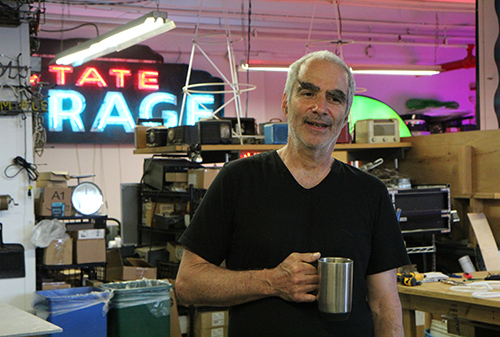 He’s in the studio every day.

In addition to the signs, Krypton Neon’s 2,000-square-foot space houses one full-time and one part-time employee. Kenny generally works seven days a week. Because he wants to.

“Glass blowing is not easy,” he says. “There’s a satisfaction to its fluidness and balance and Zen. I’m also an amateur musician, I mostly play piano and am reacquainting myself with the guitar, and I compare it to playing a musical instrument. Music takes place in time, and so does glass blowing.”

Kenny, who is 67, has no plans to retire; neon guys, he says, prefer a slow fade. 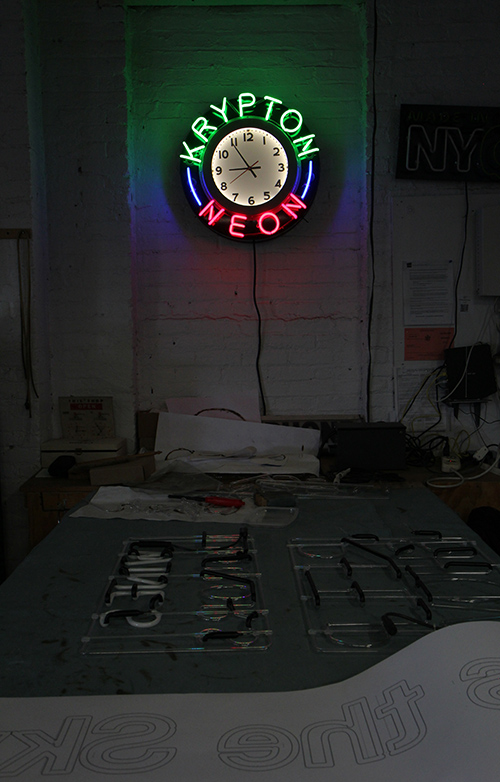 “As long as I can stand up and work and see, I’ll be here,” he says. “But that could change. It’s hard to say where neon will be five to 10 years from now. It has a history of life and deaths.”

He hasn’t thought about passing on the burner. And there’s no next generation.

“I have two cats, but they don’t blow glass,” he says.