Jane McGinn has always had a sweet spot for ice cream. She loves it in and of itself, but her affection for the beat-the-heat summer treat is more than cream deep. 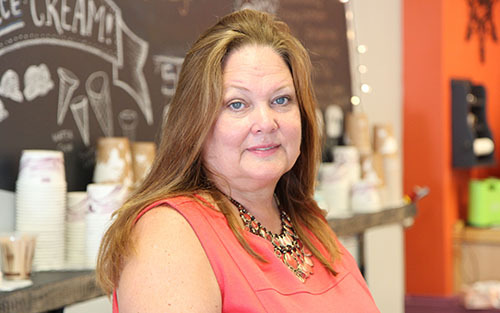 Photo by Nancy A. Ruhling
Jane grew up on ice cream.

You see, her grandmother married her grandfather because of ice cream. (OK, he also was a good dancer, but that has nothing to do with this sweet story.)

Their melt-your-heart romance began when he took her on a date and they shared a dish of the decadent dessert. 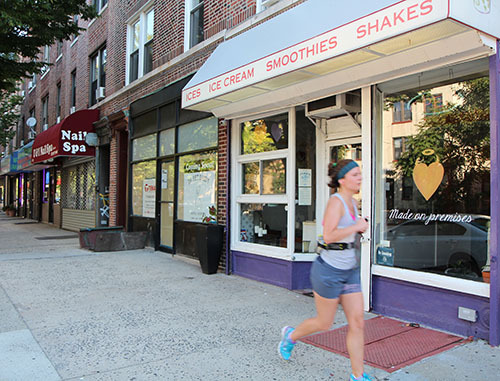 Photo by Nancy A. Ruhling
Sweet Janes is on 24th Avenue at 27th Street.

When they wed, he bought an ice cream machine, and by the time Jane and her quartet of siblings came into the picture, they, too, were helping with the churning.

Jane’s ties to the cold confection were cemented, for the most part, in East Granby, Connecticut. That’s where the family moved from Hartford, the city of her birth, when she was 4. 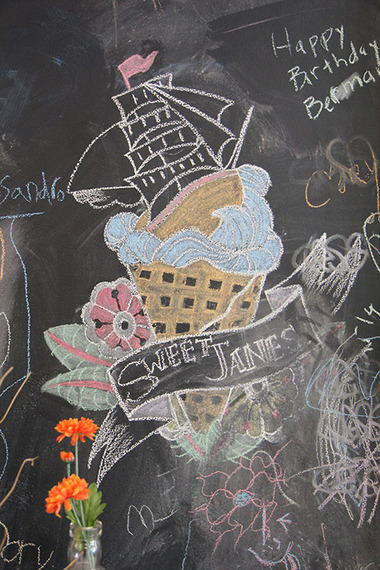 “We lived next to a dairy farm,” says Jane, a short woman with long hair who dresses in orange to match the store’s decor. “It was idyllic; we kids used to help milk the cows. We had a big freezer in the basement that was half filled with ice cream. I used to sit in my swing and eat it, and every Sunday, my dad took us out for ice cream.”

By the time Jane’s family moved to Suffield, she was a preteen who not only was a whiz at making ice cream but who also knew her way around the kitchen.

“Cooking ran in our family,” she says. “My great-grandfather was a chef for Katharine Hepburn’s parents.” 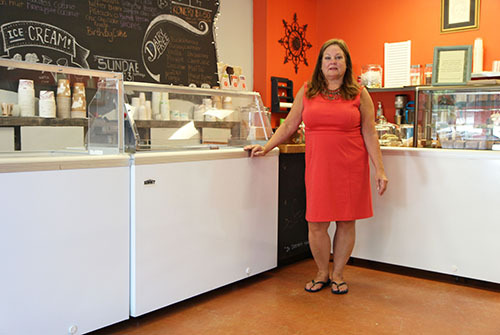 Photo by Nancy A. Ruhling
Jane dresses to match the decor.

Jane put her culinary interests on the back burner, majoring in psychology and social work in college. After her marriage, she reserved her cooking for her husband and two children.

She lived in several states — Oklahoma, Massachusetts and California — and when she divorced decades ago she moved to Los Angeles to study acting. 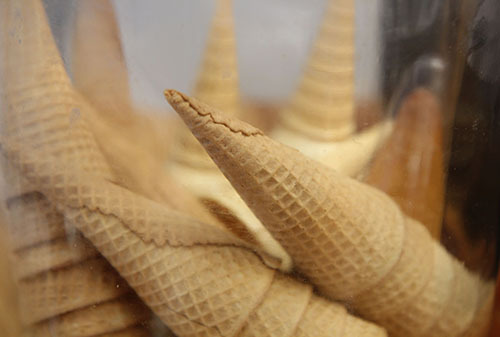 Photo by Nancy A. Ruhling
What is ice cream without a cone?

In 2005, she came to New York City to work with the MTA on large-scale real-estate issues involving the East Side Access and the Second Avenue Subway projects. 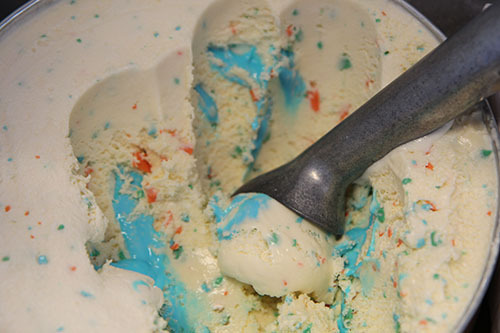 Photo by Nancy A. Ruhling
Have a scoup of Blueberry Lavender with a Coconut Base.

When she decided to walk away from the 9-to-5 corporate world, her mind screamed ice cream.

“I was bowling and bought a Magnum Ice Cream Bar,” she says. “The chocolate coating was melting, and I couldn’t even enjoy it because I had to eat it so fast. And I realized that nobody was making a bar that wasn’t filled with ingredients I couldn’t pronounce.” 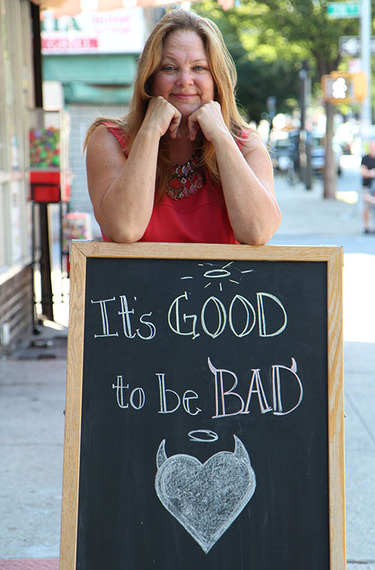 Photo by Nancy A. Ruhling
A motto to eat by.

So she created Fudgestickle, a skinny-calorie, non-GMO, non-dairy bar that, she says, is “maliciously healthy, disastrously divine and tastes like frozen sex on a stick.”

She knew she had a great recipe; all she needed to do was let other tongues try it. 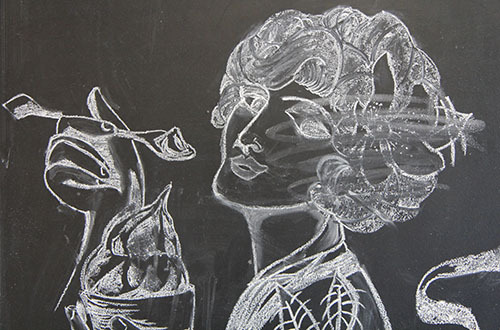 When Jane walked past an ice cream parlor on 24th Avenue, she asked the owner whether she could rent his kitchen during off hours.

He immediately offered to sell her the business, and Sweet Janes, a cool version of an old-fashioned ice cream parlor whose good-to-be-bad logo is a heart crowned with horns and a halo, came into being at the start of the summer of 2014. 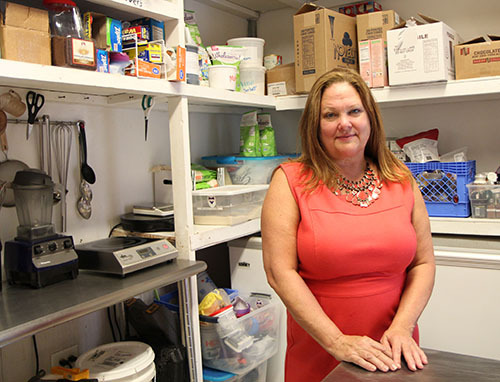 Photo by Nancy A. Ruhling
Jane in the kitchen, ‘where the magic begins.’

The fancy flavors, which include Blueberry Lavender with a Coconut Base, Heavenly Wine and Roses, Porter Ale with Coffee and Vanilla, Nutterbutter, Salty Caramel Pretzel and Orange Blossom, are rotated according to Jane’s tastes. 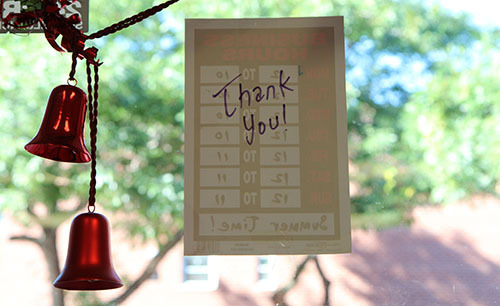 Photo by Nancy A. Ruhling
The friendly front door.

Jane makes the Fudgestickles in batches of 50 to 70 in the back kitchen.

“This is where the magic begins,” she says, pointing to a stainless-steel table. 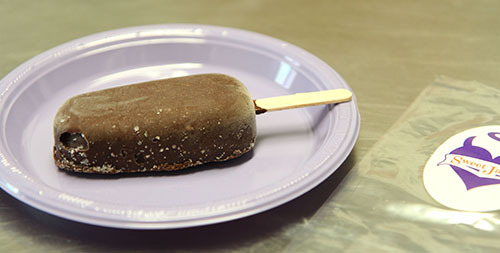 The process, which includes hand-filling the molds and freezing, takes about 14 hours.

Jane can and does eat ice cream all year round, and when the weather changes, Sweet Janes will continue to serve it, along with winter soups and hot chocolate. 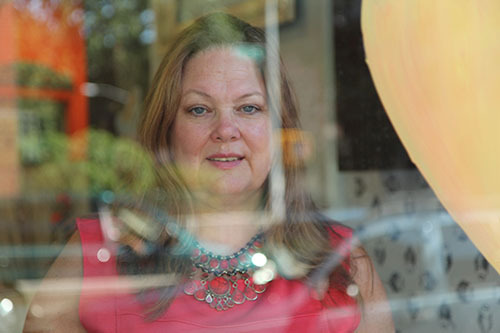 Photo by Nancy A. Ruhling
Sweet dreams of success.

If this is the first time you’ve heard of Sweet Janes, that’s OK by Jane because she’s way ahead of the scoup.

With her Fudgestickles being served in a handful of restaurants and with deals in the works to put them in supermarket freezers, she’s confident she’ll be the next Ben & Jerry’s.

And that, even more than ice cream, makes Jane jump for joy.