It’s pouring cats and dogs. That’s why Jill Parshley Cardillo and her sunny yellow umbrella are out. Jill likes to walk in the water, saving the drops on her tongue for a rainy day. 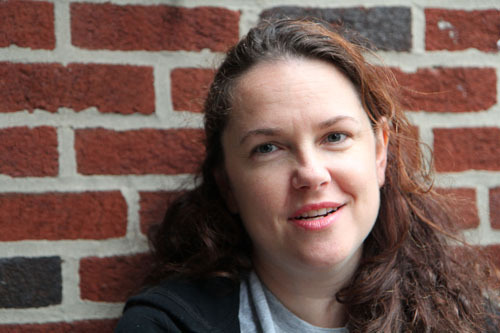 Photo by Nancy A. Ruhling
Jill became an adult when she was 9.

But this soggy slog is serious: The front door of her apartment blew open during the downpour, and Storm, one of her four friendly felines, is missing. She found Pete wandering on the balcony. Pixie and Raisen are safe inside. But Storm appears to have gone out into the storm.

She prowls the block, calling his name and offering treats but returns defeated. Then she gets the bright idea to look in the spare bedroom, the only place she didn’t search. Sure enough, Storm is on top of the tall bureau.

Relieved, Jill sits at the kitchen table and lights a white candle. She performs this ritual every day to remind her of those who are no longer with her.

The flames serve as the keepers of her memories, which have been clouded by time. Jill’s father died when she was 9, and long before her mother followed him, she was taken away by sorrow and the drinks she downed to stave it off. 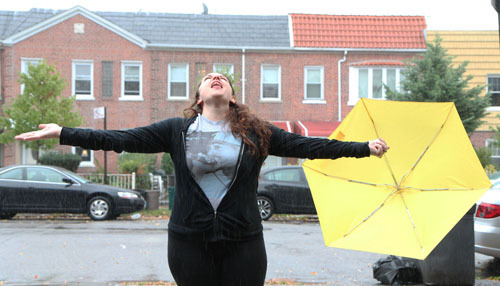 Photo by Nancy A. Ruhling
Soaking up the rain.

Jill and her older sister clung to each other.

“I had to become the man of the house,” Jill says. “The day I turned 14, I got my working papers. I wanted to help out, and my mother needed me to. There wasn’t enough money to buy me a winter jacket or lunches at school.”

That first job, at Key Food, led to a succession of others that continue to this day. Jill filled the rest of her schedule with school activities, signing up for volleyball, swimming and gymnastics.

“I had a bucket list,” she says. “I wanted to experience everything.” 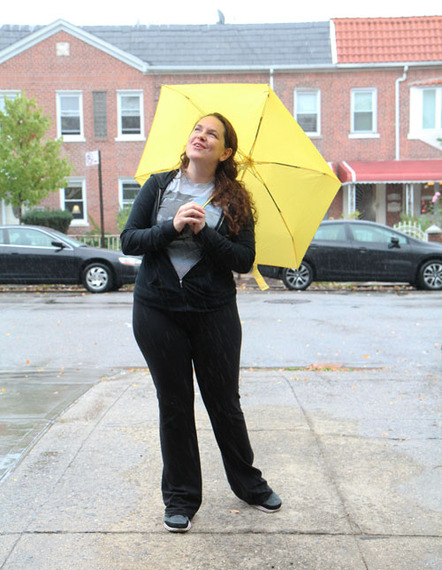 Photo by Nancy A. Ruhling
Seeing the sunny side.

She also became a reporter for the school newspaper and began filling blank notebooks with her feelings. She still has them; there are too many to count.

“My journal became my best friend,” she says.

She begins reading aloud a poem she recently wrote about a long-lost summer day she spent on 28th Street in Astoria, where she grew up. It’s sadly nostalgic.

Without prompting, Jill says that she doesn’t blame her mother — “a beautiful woman” — for anything that did or didn’t happen.

“She did the best she could,” she says. 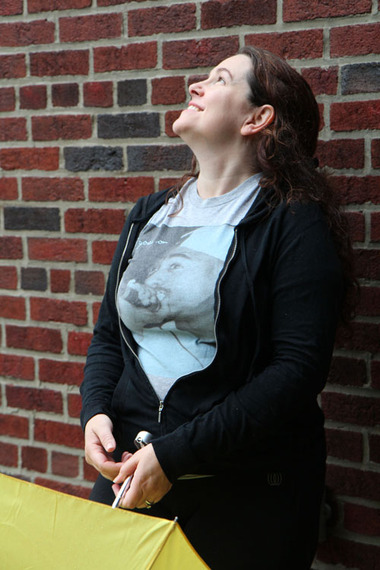 Photo by Nancy A. Ruhling
Jill sees her role in life as helping others.

She glosses over the time her mother spent three days in jail for a drunk-driving crash, saying that “she wasn’t bad, she was sick.”

There really were good times. To prove it, she goes to the kitchen and produces a mug that features a decades-old photo of her, her sister and her mom. See, everyone is smiling.

Jill, a youthful woman with old eyes, has a lot more family stuff that she has carried with her all through her 41 years. There’s a cassette tape of her mom and dad singing that she likes to listen to. Recently, she discovered a book her dad wrote in his youth. She’s editing it. She wants to get it published.

Although Jill worked her way through Queens College, she’s quick to give credit to her mother. “She helped me financially with the first semester,” she says. 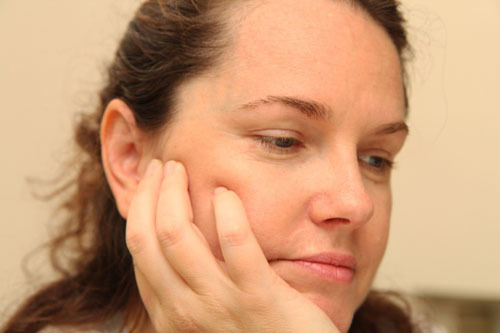 Photo by Nancy A. Ruhling
Jill musing about her childhood.

After graduation, she focused on acting, winning a lead in an educational production. The touring show, geared to schoolchildren, came with a history lesson about the Holocaust that Jill played out in 23 states.

Somewhere along the way while Jill was taking care of everyone else, she took up drinking as a hobby.

“I felt I was turning into my mother,” she says. “Liquor gave me a comforting feeling. It allowed me to swallow my fears and put a new skin on. Fortunately, I realized early on that I had a problem and stopped. I’ve been sober for 15 years.”

There are other things she can’t kick and wouldn’t think of removing from her DNA. An overachiever and perfectionist, Jill sees her role as helping others. 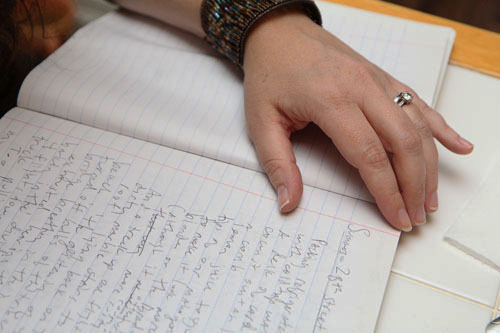 Photo by Nancy A. Ruhling
Jill’s poems and short stories center on her childhood.

To earn a living, she’s done everything from babysitting to writing press releases. She likens herself to a Jill of all trades.

“I get bored easily,” she says.

Which is why she can’t wait to begin her latest venture.

“I want to be a writing therapist,” she says. “Writing helped me. I can add this to my skills in drama therapy to help young adults. That’s the most beautiful thing I can think of.” 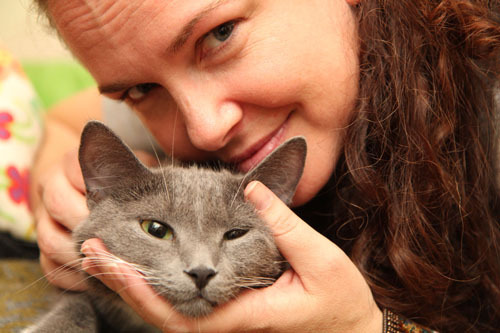 Photo by Nancy A. Ruhling
Pixie is one of the strays Jill saved.

But there’s something else she’s also like do to. Recently, she became a certified yoga teacher, but before she got to show her first class how to do downward-facing dog, she hurt her hip. She probably won’t be able to return to the mat.

“Since I can’t practice the way I used to, I thought I would develop a yoga class for disabled children and adults,” she says. “We’d be learning together.”

She gives Pixie a big kiss on the top of the head.