‘Tis the month of Christmas, and I’m strolling along Steinway Street, when what do my wondering ears hear but “Rudolph, the Red-Nosed Reindeer.”

I look left. I look right. Curiously, the carol isn’t coming from a car stereo. Or a store.

I’m not Dorothy, but I stare at my shoes; will Santa and his sleigh go away if I click my bronze MBTs three times?

And then I look to the sky and see the sound. Yes, Virginia, the song is singing itself silly out of a speaker strapped to a streetlight. 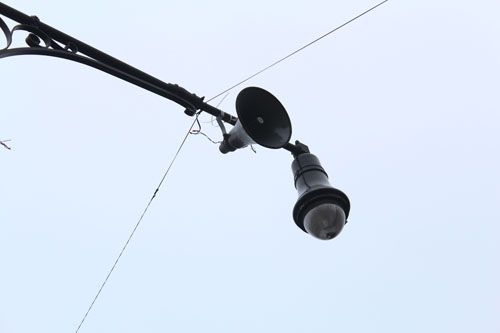 Photo by Nancy A. Ruhling
At Steinway Street and 28th Avenue, there’s a singing streetlight.

There’s something seriously seasonal and sentimental about this. It’s so un-Astoria-like. The neighborhood has always been more grit than greet. A lot of movies have been filmed here, but It’s a Wonderful Life wasn’t one of them. And Astoria, thank goodness, sure ain’t Bedford Falls.

Why was this streetlight singing? And when did it start blurting out its songs? Nobody, not even Dasher and Prancer, seemed to know. 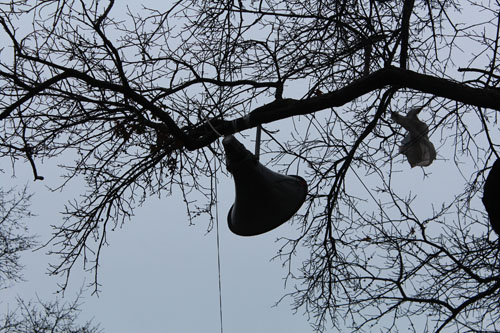 Photo by Nancy A. Ruhling
It’s not a pear tree.

The answers aren’t magical. It turns out that it was a gift from the Steinway Astoria Partnership, not Santa. Marie Torniali, its executive director, gave me the scoop on the lyrics and lights.

A dozen years ago, someone who didn’t have a white beard and a red suit got the bright idea to have carols playing during the holiday shopping season. It’s been going on ever since. 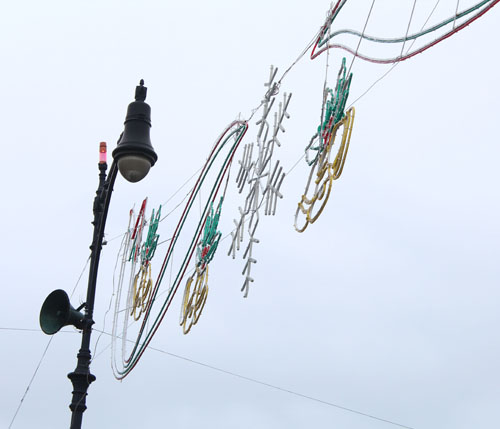 Photo by Nancy A. Ruhling
Did Rudolph lose his nose at 30-02?

Marie informed me that there’s not one but 14 singing streetlights — and a solo speaker in a non-pear tree. The singing streetlights perform in the business improvement district, 28th to 35th Avenues, from 11 a.m. to 7 p.m. daily from Black Friday through New Year’s Eve.

The playlist, which ranges from “Grandma Got Run Over by a Reindeer” to “White Christmas,” is programmed on an iPod. 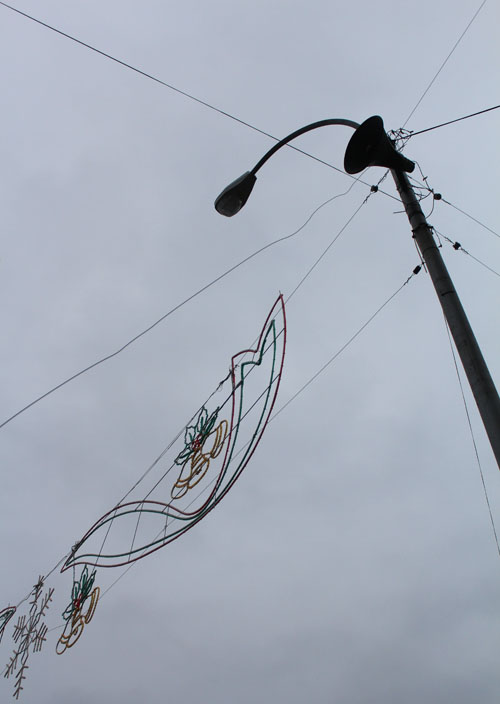 Photo by Nancy A. Ruhling
The scene at Steinway and Broadway.

“The music adds to the seasonal ambience of the street,” she says. “Sometimes we get complaints about the noise, but there are many more fans than complainers. One year we didn’t do it and got a ton of complaints.”

I decided that I had to hear this for myself. So I set out on a frosty, foggy Saturday morning to do the first part of the route, from 28th Avenue to Broadway. 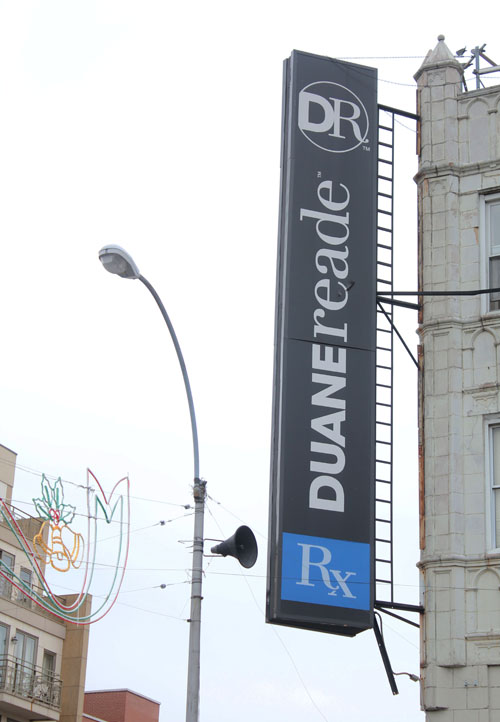 Photo by Nancy A. Ruhling
The carols bring holiday cheer.

At 28-48, the first stop, where I originally heard Rudolph ride by, there’s a Chinese restaurant named Shampan whose golden awning hangs in tatters. By the time I got to stop No. 2 at 30-02, the site of Mini Star Restaurant, “I Saw Mommy Kissing Santa Claus” was playing. (There’s no excuse for missing this one; the vintage-style light pole is topped by a Rudolph-red light.)

Outside Giorgio’s of NY Hair Salon, 30-26, Elvis’ “Blue Christmas” was blaring from the bare branches of a tree. At CEX Entertainment, 30-60, “God Rest Ye Merry, Gentlemen,” was ringing out. At Modell’s, 30-88, I was cheered by “Santa Claus Is Coming to Town.”

As I headed for the subway, I started singing along, taking comfort and joy in knowing that the singing streetlights will keep up their chorus.