Lordy, lordy, things could have taken quite a different turn if Maureen McGowan hadn’t hated Irish step-dancing so much.

In a burst of ill-conceived patriotism, her immigrant parents made her take lessons so she could learn the culture of their homeland. What’s worse, they signed her and her three older siblings up with a group that went around performing in nursing homes and way stations for wayward children.

That’s why at age 10 Maureen found herself in Peekskill, New York, dancing in front of a bunch of teenage girls who were under the supervision of the Sisters of the Good Shepherd. The teens applauded all the acts before hers. But they booed Maureen’s group. 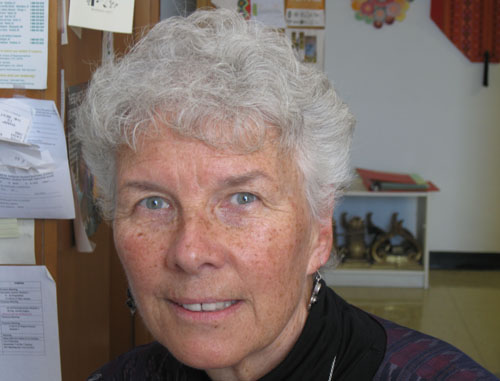 “I connected with the girls because I didn’t like doing it,” says Maureen. “The sisters gave them one look, and they stopped booing.”

Maureen, a tower even in her flat, sensible shoes, never forgot the teens or the nuns, and when she decided to dedicate her life to God, she chose to join the Sisters of the Good Shepherd, who make it their mission to empower the women and girls around the world society doesn’t give any mind to. 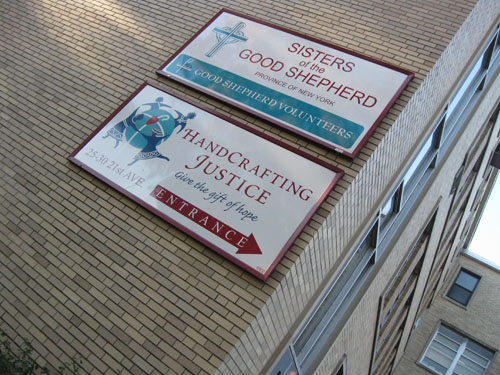 “You could say that I danced my way to the sisters,” Maureen says. “Forty-seven years later, I’m still dancing and loving the steps.”

Wait, shouldn’t we be calling Maureen Sister Maureen? “Oh, it doesn’t matter,” she says humbly. “Everyone in the office calls me Maureen.” 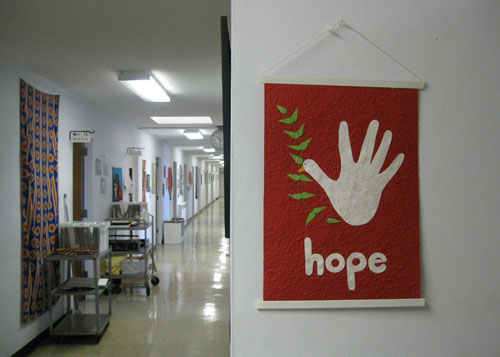 Photo by Nancy A. Ruhling
The sign inside says it all.

Maureen’s the director of Handcrafting Justice, a Sisters of Good Shepherd project that sells handmade goods made by impoverished women in the developing world, and the office she’s talking about is on the top floor of a parochial high school.

She leads the way down a tunnel of a hallway that’s punctuated every couple of feet by doors on each side. Compulsively clean and decoratively challenged, it could be a hospital ward. It is here that the goods — purses and pottery, statues and silk scarves, bracelets and bags for laptops, dolls and decorations — are stocked to the ceiling on utilitarian metal shelves. 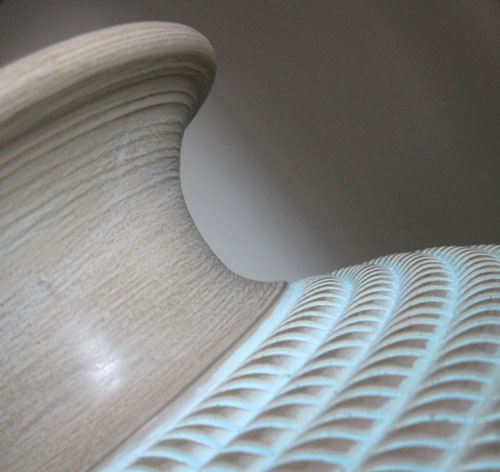 Photo by Nancy A. Ruhling
Items for sale include pottery from Thailand.

Maureen, whose royal-purple recycled-silk jacket from Handcrafted Justice makes her silver Sisters of the God Shepherd cross shine like the Star of Bethlehem, rattles off the names of a UN of countries: Thailand, Peru, Sri Lanka, Haiti, Madagascar, Paraguay, Kenya, the Philippines.

This is no mom-and-pop charity; the Fair Trade nonprofit makes $300,000 in annual sales, and on any given day, there are 100,000 items in stock at the office. Maureen revels in revealing every detail about each of them. 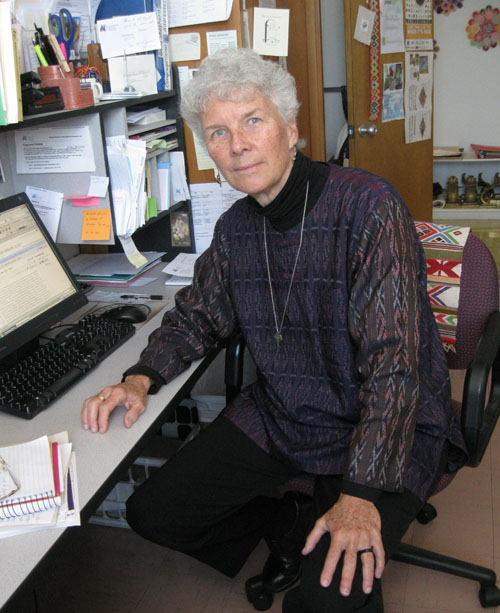 Photo by Nancy A. Ruhling
Maureen speaks for the world’s forgotten women.

Maureen, who grew up going to Catholic schools and morning mass, entered the convent in 1965 right after high school, before young women like her started rebelling against the establishment.

In those days, there weren’t many choices for women so they had to trust to God. Which is exactly what Maureen did. She didn’t see herself as a schoolteacher or a nurse. She saw herself helping other people. 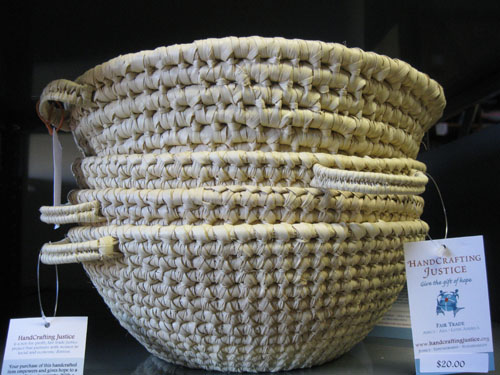 Photo by Nancy A. Ruhling
Baskets hand woven by the women of Haiti.

“I felt called to social work,” she says, adding that she earned her master’s of social work degree from Yeshiva University.

As the decades passed, the sisters enlisted Maureen for a variety of jobs in New Jersey, New York and Long Island. There was a time, early on, that she worked with adolescents in residential treatment centers. It was while she was helping the Good Shepherd Volunteers, which sends lay people to work with women around the world, that the idea for Handcrafting Justice was born. 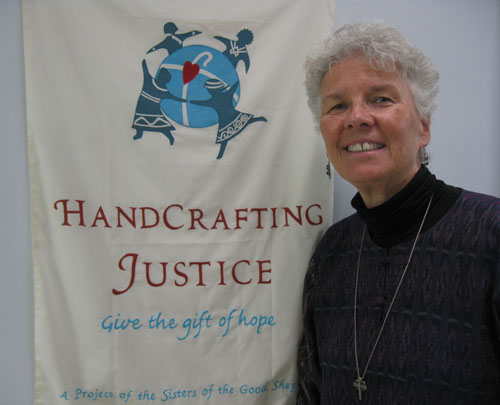 Photo by Nancy A. Ruhling
Maureen has been the nonprofit’s director since 2005.

The order has income-generating, female-empowering projects all over the globe, and the nuns abroad wanted to bring the goods to the U.S. market. Maureen took some of the first items to the States in a backpack. In 1997, she was a key player in the formation of Handcrafting Justice, which sells through its website and 22 U.S. reps.

“The sisters in the various countries set up social service centers,” she says. “The gift of the sisters to the women of the world is to bring them all together so they can practice their craft.”

For Maureen, the mission of empowering women doesn’t stop when she leaves Handcrafting Justice. She lives in Providence House, a Sisters of St. Joseph nonprofit in Crown Heights that helps women on parole readjust to society. 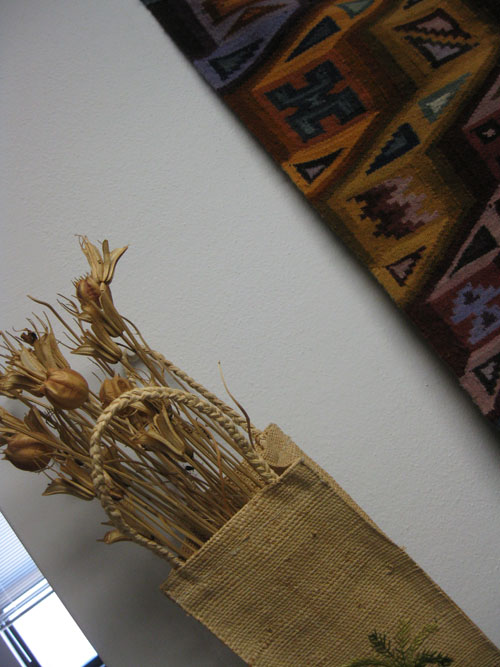 Photo by Nancy A. Ruhling
The office walls are filled with handmade items like these.

Maureen, who has been Handcrafting Justice’s director since 2005, dreams of a time when the nonprofit becomes self-sustaining; now, it relies upon grants.

“I’ve seen what the proceeds can do,” she says. “It’s quite empowering to meet the women. I went to a remote area of Peru, and I saw a house where a blue tarp was the only roof. When I went back, the family had a real roof and a real floor all because of the goods sold through Handcrafting Justice.”

She gets excited talking about the difference the nonprofit has made. She doesn’t take any credit for its success, she thanks God for that, but she would like to be a part of its future. 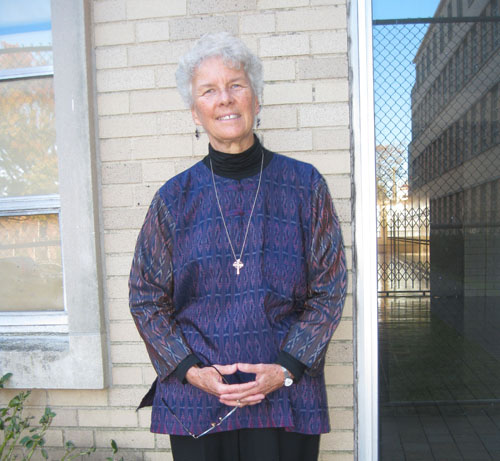 Photo by Nancy A. Ruhling
Maureen’s work has made a difference in women’s lives.

“I’m 64, and I’d love to stay involved in economic justice,” she says. “It lifts up the lives of women and children. The fullness of my life is more than I ever imagined. I see myself here as long as I can do it physically — it’s a lot of heaving lifting, unpacking the products and getting them packaged for sale.”

As she’s talking, she takes a hat off her office wall. Flat and round like a dinner plate, it is designed to shade from the searing sun of the Andes. The women of Peru presented it to Maureen when she visited them in 2002.

“It is a privilege for me to be the voice of these women until they have their own voice,” Maureen says, running her fingers over its hand-embroidered designs, marveling at its magnificence.