Veronica Devine is padding around in her bare feet. She’s a morning person, a really funny thing for a bar owner to be.

She’s shucked her sky-high silver sandals, which she swears on a bottle of Smirnoff are as comfortable as house slippers.

She went to a customer’s wake last night and didn’t put her pretty blond head to pillow until 11 p.m., long past her 8 p.m. bedtime. Her blue eyes look like faded jeans.

It’s not yet 9 o’clock, and she’s been cleaning up since dawn in her sundress, which is the color of shamrocks, and her big silver jewelry. 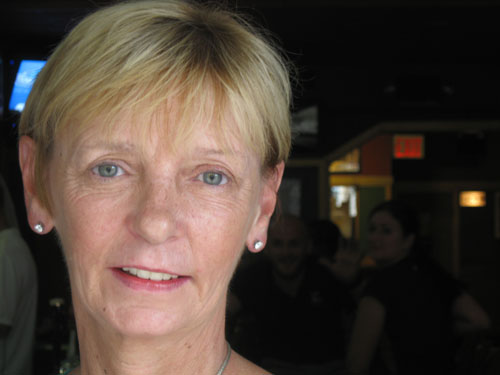 Photo by Nancy A. Ruhling
The Veronica of Veronica’s Bar.

Usually, she’s the only one at Veronica’s Bar at this ungodly hour, but it just so happens that a bunch of bartenders is crowded around the TV watching a rugby game. Veronica’s a Coke and vodka woman; she’s clutching a can of Coke for dear life — the caffeine will get her through the day.

Where the devil is Fawn? Veronica scurries around until she finds her precious pug, which she treats like her own child. 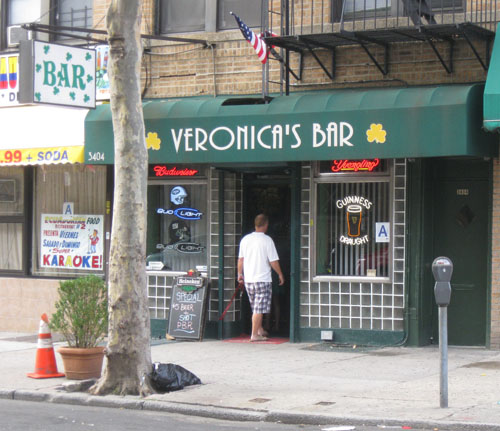 Photo by Nancy A. Ruhling
Veronica’s is an old-time neighborhood bar.

“A customer asked me to babysit her and never came back for her,” she says. “Not that I’d ever part with her.”

Veronica, Helen Mirren in Prime Suspect, grew up in County Fermanagh, Northern Ireland, the third child in a working-class Catholic family of six girls and a single boy.

In those days, Fermanagh was an Irish Republican Army stronghold. 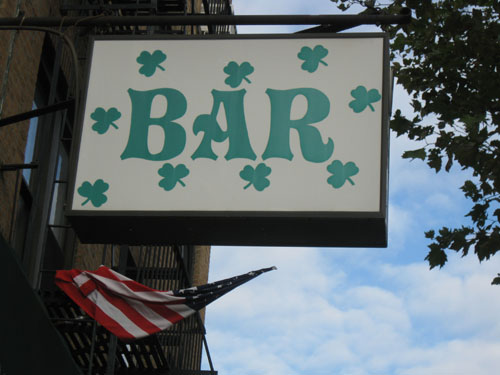 Photo by Nancy A. Ruhling
Veronica’s shows off its Irish.

“We never had any trouble,” she says, “because our parents brought us up not to be prejudiced. We weren’t afraid; we were young. We hung out in a Protestant bar, and when there were bomb scares, they sent in the sniffing dogs. We just carried our drinks outside and went right back in when they left.”

When she married Edward, a recently retired NYPD cop who takes the nighttime shift at Veronica’s, they settled in New York. “He was so good-looking,” she says, the lovely lilt of her accent bringing romance to her words. “Truth be told, he’s still good looking.” 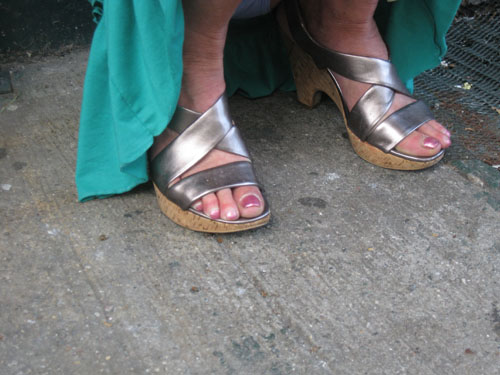 Photo by Nancy A. Ruhling
Silver sandals — a Veronica trademark.

It was when their two daughters were young that Veronica started bartending in Astoria and Manhattan. She’s never been to bartending school; she scoffs at the very idea.

“It’s simple to learn bartending if you drink because you know what goes in them,” she says. “I used to work at old-school Irish bars that didn’t allow women; I was the only woman bartender. It never was a problem. I’m tough. I can do what I want.”

Veronica opened Veronica’s a dozen years ago. The place’s history is as blurry as a drunk’s double vision. 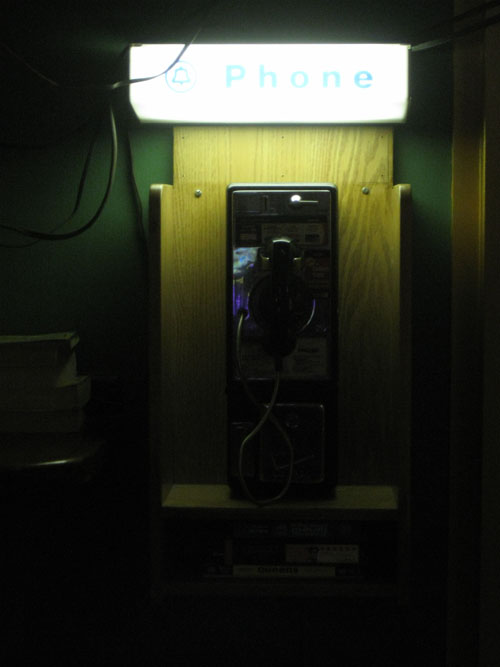 Photo by Nancy A. Ruhling
When was the last time you saw a pay phone?

It was a bar when Veronica bought it, of course, and somewhere back in time, as long as 60 or 70 years ago, it did do duty as a drinking establishment. In fact, at one point, it was the only pub in the neighborhood. It also served as an Italian restaurant.

“I’ve heard that in those days you could get spaghetti and meatballs for 50 cents,” Veronica says. 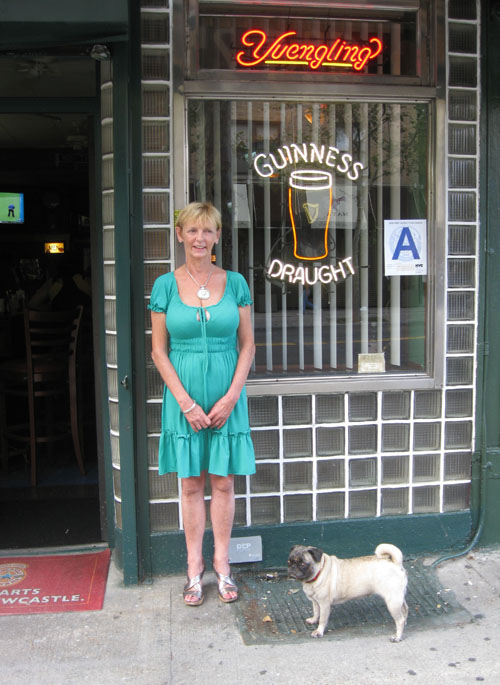 Photo by Nancy A. Ruhling
Fawn and Veronica doing the day shift.

Veronica’s announces itself to the world with a green awning decorated with yellow shamrocks. It’s not a fancy place on purpose.

The linoleum floor is a colorful crazy quilt of mismatched tiles, and the counters are scarred with the wedded rings of drinks gone by. There’s a pool table and a pay phone. The black leatherette barstools look like refugees from the 1970s. 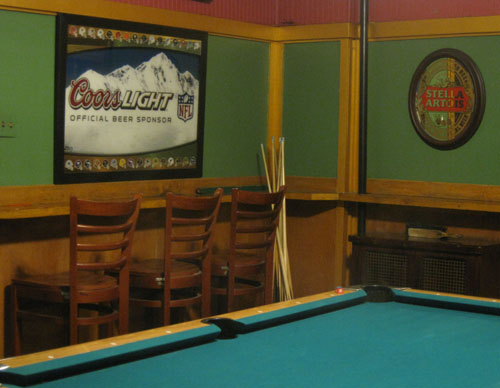 Photo by Nancy A. Ruhling
Everyone jump into the pool room!

“It’s an old place, but it’s not a dive,” Veronica says, adding proudly that it earned an A rating from the health department. “It’s a neighborhood bar, and it’s immaculate. I know because I do all the cleaning because I’m real particular.”

Veronica, a stunner, doesn’t miss bartending; she prefers to leave it to the “young, good-looking ones.” 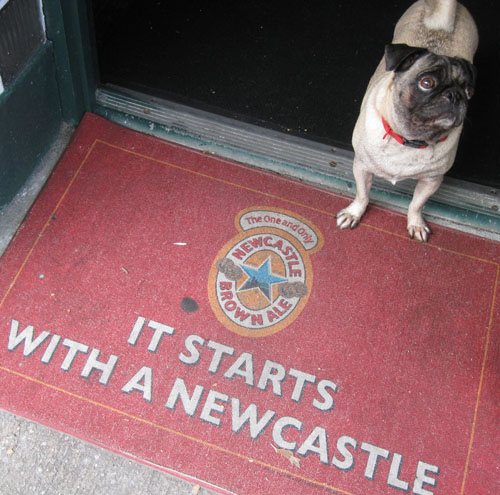 Photo by Nancy A. Ruhling
Fawn on the red carpet.

The cleaning done, she’s heading for home, which is just a couple of blocks away. Throughout the day and early evening, she’ll be popping in and out to check on things.

“I love owning the bar because my customers are like my other family,” she says. “I know everybody by name, and they know all about me.”

Sometimes, she dreams of owning a second bar, but Veronica is realistic. She doesn’t know what will happen to Veronica’s when she’s ready to give it up. 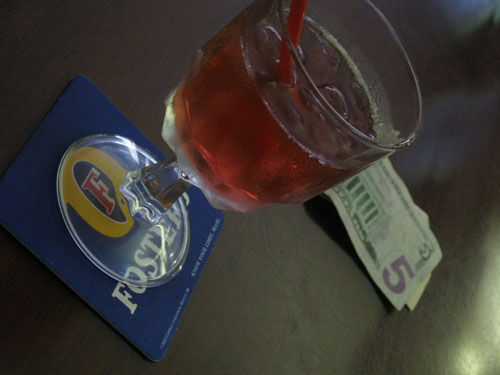 Photo by Nancy A. Ruhling
Raise your glass to Veronica’s.

It’s a sure thing that her daughters won’t take it over, and she knows that sometime too soon it will be the last call for establishments like hers.

She collects Fawn and walks out the door, her silver sandals shining in the morning sun.