This is no joke. The pancakes are damn good.

Tom Daddario had wondered whether he should make them. As a stand-up comic, he’s obsessed with getting the last laugh. 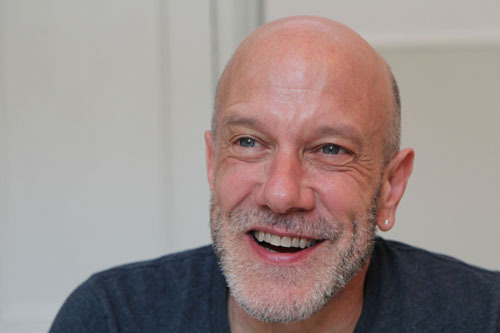 Photo by Nancy A. Ruhling
People always told Tom he was funny.

In all seriousness, people expect him to be funny even when the stage is his kitchen and he’s tossing oatmeal, mashed bananas and sliced chocolate bars into the Aunt Jemima mix.

As in his routines, he will let life, not pancakes, supply the punch line. 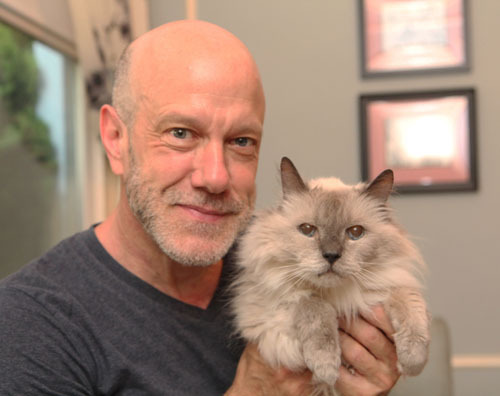 Photo by Nancy A. Ruhling
Tom and 19-year-old Elijah.

He’s not the only one stirring. Oliver, his aggressive cat, is locked up in the bedroom and is trying to scratch the door down with all of his 18 claws and nine lives.

His other cat, 19-year-old Elijah, is letting the wind from the air conditioner give him a punk hairdo.

Elijah’s a furry-purry ball, and Tom’s bald, but they have matching electric blue eyes. Laugh, but sometimes Elijah lets Tom put hats on him. 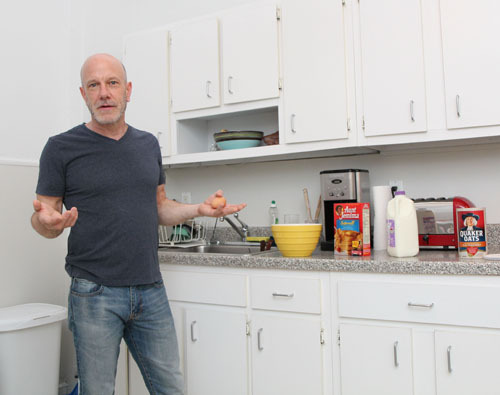 Photo by Nancy A. Ruhling
Will Tom’s pancakes routine have a punch line?

Tom’s girlfriend is sleeping through all the commotion.

This house holds a lot of memories for Tom because he practically grew up in it.

His grandfather owned it, and Tom’s family lived in the second house facing it that was erected on the same small lot. Tom played in the yard between them. 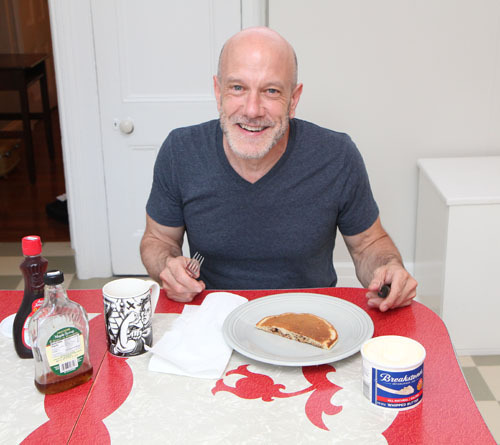 Photo by Nancy A. Ruhling
He’s waiting for your applause.

Tom didn’t have much to laugh about when he was a kid, so he played a lot of pranks.

“My father was a bit of a drinker, and he was emotionally abusive,” Tom says. “I used to rush out of the house when he came home, and I actually was relieved when he died because I always had a sense of dread when he was around.”

By that time, Tom was 17 and was making a name for himself as a singer in a local band.

“Everybody knew who we were,” he says. “I traded singing for acting because you can do it solo; you don’t have to depend on others.”

All too soon, Tom got married, got a 9-to-5 job installing burglar alarms and video surveillance cameras and landed roles in local plays. He didn’t pick up stand-up until he was 37.

“I had just gotten divorced,” he says. “I had always wanted to do it, but it was hard for me to get up enough nerve to get on stage.” 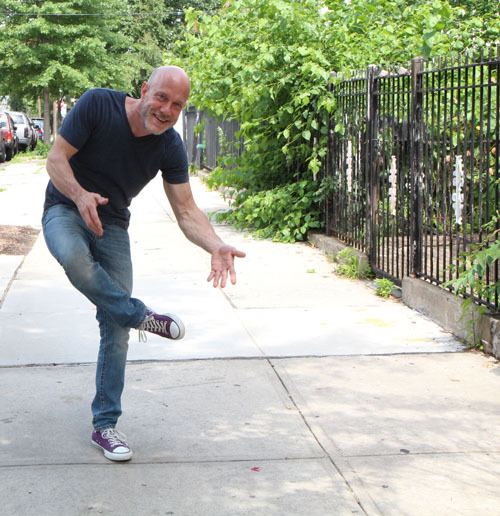 The funny thing about comedy is that you have to be serious to make it work.

“There’s a ton of disappointment and disillusionment in this business,” Tom says. “When you’re on stage, the goal is to make it seem like you’re simply talking. I go on with an idea and a punch line and go from there.”

His idea could be sparked by something as simple as a subway sign warning passengers not to dive onto the tracks for dropped items. OK, he gets it, leave the cellphone. But what if you drop a baby? 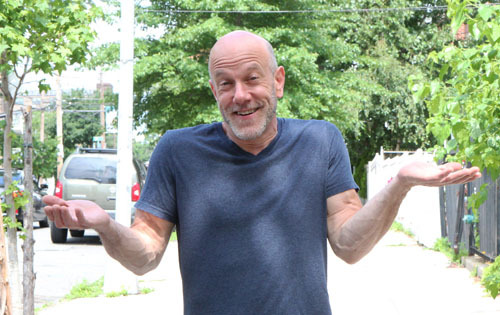 Photo by Nancy A. Ruhling
Who? Me?

Tom’s blue eyes bug out, and he throws his hands up into the air at the absurdity of this advice.

So what did they do, hold up the train with their bare hands? And did they play Superman for someone who had to pick up a dropped baby?

“A joke is like a kid,” Tom says. “Sometimes it turns out OK; other times it’s a total bum, and you have to get rid of it.” 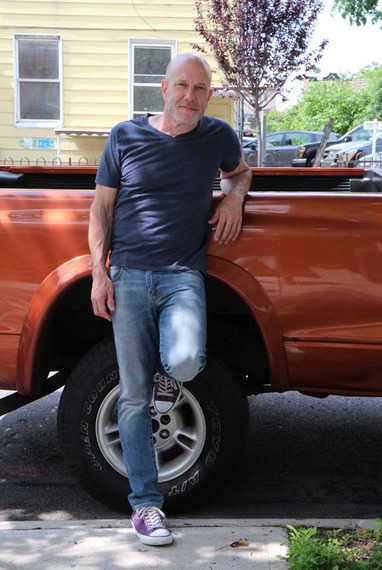 Photo by Nancy A. Ruhling
Tom waiting to pick up some jokes.

Harsh, yes, but somebody has to do it.

“You’re only as good as your last show,” he says. “The audience is like my father I could never please. Every time I get approval, I want it again and again and again.”

It’s been 17 years, and at 53, Tom isn’t standing around or standing up waiting for his big break.

“I’ve done more than I thought I could accomplish,” he says. “If I can make people laugh and have some fun, that’s great. But if lightning strikes and HBO calls, I won’t hang up the phone.”

He puts another pancake on his plate and slathers it with maple syrup.