Bigger than a dinosaur. Faster than DSL. Able to knock down tall buildings with a single blow.

Cera The Bull chuckles, and the room shakes. These things that people say about him may be a slight exaggeration. But be careful; they may be true. Let’s try not to put it to the test.

Sead Cerovic, aka Cera The Bull, is indeed a big guy. His 6-foot-2 frame stands on 240 pounds of monumental muscle. With his Popeye arms, piercing blue-grey eyes, long, straggly jet-black hair and earring, he looks like a Viking warrior. Or a pirate. Or a prizefighter. Or a rock star. 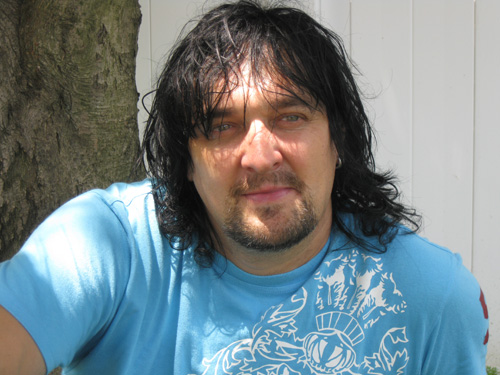 Photo by Nancy A. Ruhling
Cera The Bull is as strong as his nickname.

Cera The Bull came to Astoria not because he particularly wanted to, but because of the war in Bosnia. He was living in Sarajevo, the capital and city of his birth, with his wife, Gorana, and their 2-year-old son, Alen, when she decided to visit her mother, who lived right over the bridge.

It was on that date — May 4, 1992 — that the first bombs fell, cutting them off from each other for four years. She, a Christian, on the Serbian side; he, a Muslim, on the Muslim/other religions side. “I’m not religious,” he says. “I never go to the mosque.”

Before this, life had been good to Cera The Bull. He says this because the war made him forget about the bad times.

His parents got a divorce when he was 1, and his mother, Dzehva, struggled to raise him and his older brother. “When I was 8, my father gave me a watch,” he says. “The next day, he took it away from me.”

By 12, he was relying upon his brute strength to make his way through the world. During the summers, he got back-breaking jobs loading trucks and hauling heavy stuff. He enrolled in college with dreams of becoming a physical therapist or gym teacher, but he quit after two years. “By then, I had a wife and baby,” he says. “I needed to earn a living.”

He took up taxi driving, and he and Gorana sold goods at weekend flea markets. Pretty soon, he made enough money to open a flower shop for Gorana. “We made a lot of money,” he says. “During the war, the shop was looted and destroyed.” 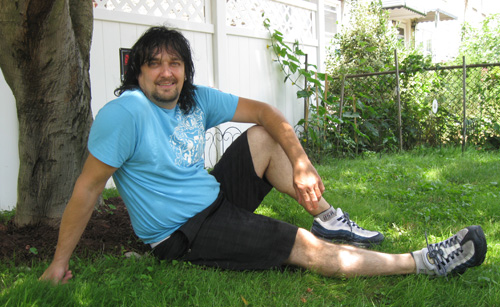 Photo by Nancy A. Ruhling
Cera The Bull survived a beating by soldiers.

Nothing frightens Cera The Bull, but the war, he says it was pretty bad. Because he and Gorana were of different religions, he was beaten by soldiers. It took an army of 25 to take him down.

“The hit me with their fists and guns, and they kicked me,” he says. “They damaged my neck and broke two ribs. Then they took me to the mountains for 14 days and forced me to dig a tunnel while I was injured. My friends finally persuaded them to let me go.”

The 12-story apartment building Cera The Bull, Alen and Dzehva lived in also suffered physical damage when it was hit by bombs three times.

When the fighting ended, couples of mixed marriage were encouraged to come to America, so in 1996 Cera The Bull brought his family to Astoria, where his cousin lived.

“I didn’t know any English,” he says in perfect English. “For the first three years, I could understand nothing, and then one day, everything opened up.”

Through a relief organization, he got a job as an upholsterer. “I didn’t know how to do it, but the company taught me,” he says. “If you show me something once, I can get it.” 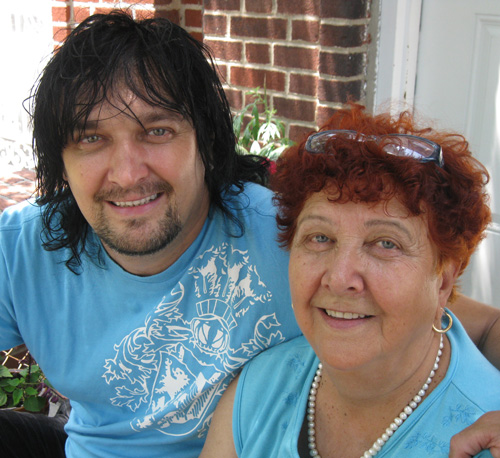 Photo by Nancy A. Ruhling
Cera with his mother, Dzehva, who has come to Astoria to live with him.

He was happy — he was making $265 a week and soon got a raise to $400. “Whenever they had a hard project, they came to me, not the others who had more experience,” he says.

The extra money came in handy after his daughter, Elma, was born. Cera The Bull, strong of heart, body and mind, took on extra work to feed the extra mouth. He became a live-in super in a 24-family building in Astoria. “I learned sheet rocking and plumbing and stuff I’d never done before,” he says.

When the first upholstery company closed, he got a job in another. Things were definitely looking up; they made a happy family.

One day in 2001, when Cera The Bull was outside working on a upholstery job, Gorana suffered a stroke. By the time he got to her, she was gone. She was 32; her death broke his giant’s heart.

“My mother flew in from Bosnia the next day,” he says, adding that she eventually stayed three years. “I had to move out of the building and quit the super job because they needed someone there during the day while I was at work.”

Shortly afterward, he lost his day job when the upholstery company went out of business. He started doing repair work for several landlords, turning himself into Cera The Bull, Super Handyman, on call 24/7. “I take care of 30 to 40 houses,” he says. “It’s still hard to make a living.” 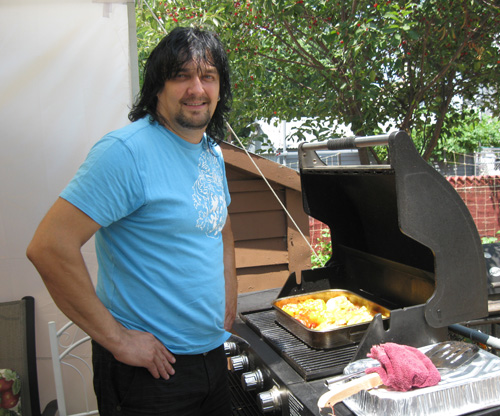 Photo by Nancy A. Ruhling
Cera The Bull is also handy around his own house.

Elma, who is 12, has been going to school in Bosnia, living with Dzehva and returning to Astoria with her grandmother every summer. This year, she and Dzehva will make New York their permanent home and live with Cera The Bull and 22-year-old Alen, who shares the upstairs space with his girlfriend.

Cera The Bull wishes he had more work; he doesn’t like to sit around. He fills up the time working on the car, cleaning the house and cooking. “If I sleep more than five hours, it’s too much,” he says, adding that work — not a formal exercise regimen — keeps him fit. “I cook a lot — stuffed peppers, goulash, steak. When I cook, everyone comes.”

He’s going to build up his upholstery business; someday he’d like to open a little shop.

“Thank God I left Bosnia,” he says. “I’m so happy because now my children and my mother will be with me. We’ll be together forever.”