The black lacquer coffee table is covered with a piece of chocolate-brown burlap. Boxes of vintage buttons and beads are scattered about.

Asami Hotta, cheerleader cute, kicks off her flip-flips and flips her long dark hair behind her head. Seated on a brown-leather footstool, she picks up a petite pair of pliers, and with the skill of a neurosurgeon, starts turning the bits into a piece of one-of-a-kind costume jewelry.

“I love antique things,” she says, unscrewing the lid of a jam jar jammed with glittering buttons. “They are irresistible. I see the history, and I feel their energy.” 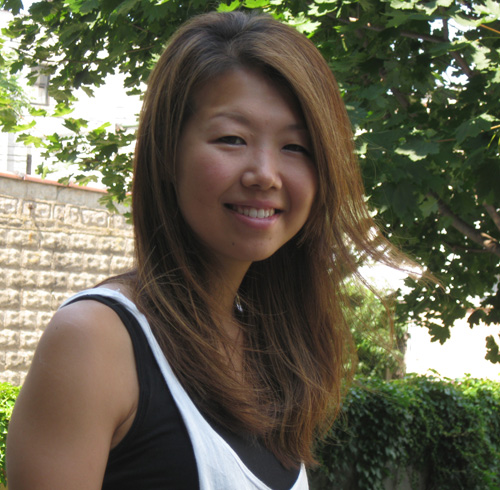 Speaking of history, a key piece of Asami’s isn’t here. Her boyfriend, Fumihisa “Fumi” Matsueda, is upstate racing his motorcycles.

Fumi, it will be recalled, gave up everything to follow Asami from Toyko to New York in the name of LOVE. Meeting Asami, it’s easy to see why. 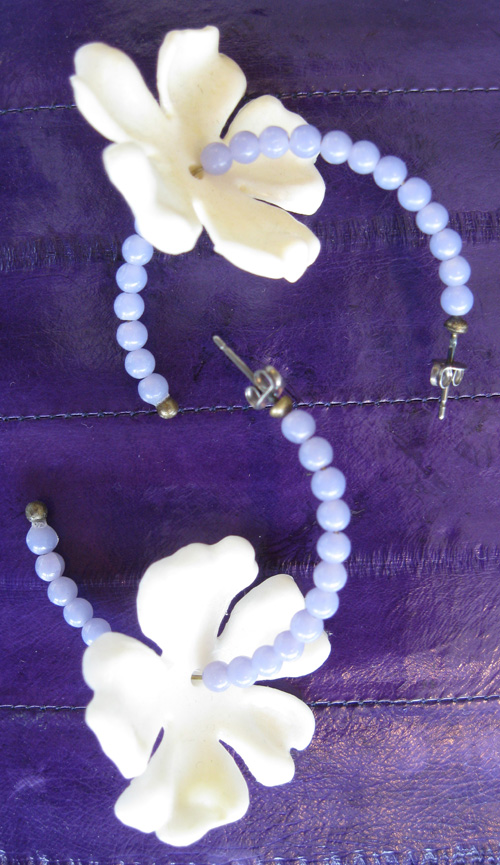 Photo by Nancy A. Ruhling
Asami’s jewelry includes pieces of the past.

Like Fumi, Asami is Japanese. But she, the older of two sisters, grew up in a happy family. Her father, a businessman, and her mother, a private English teacher, raised their daughters in Fujioka, a small suburb two hours from Tokyo.

“I used to play with my mother’s jewelry,” Asami says. “And even as a child, I always liked making things. I used to make jewelry to give to my friends.” 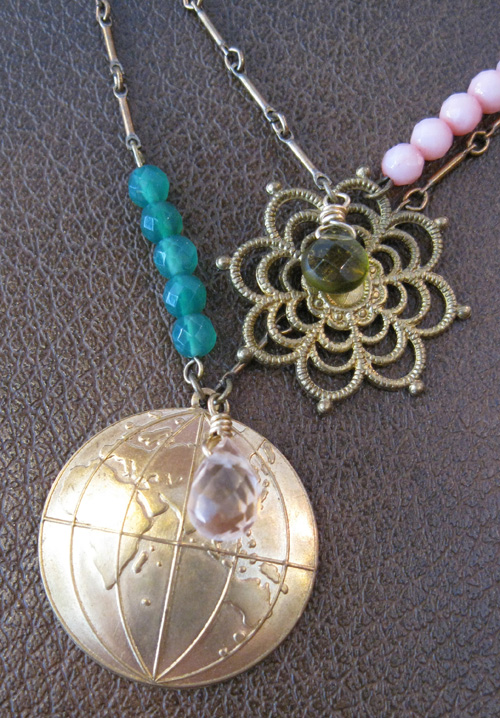 Photo by Nancy A. Ruhling
Her unique costume jewelry is Asian-inspired.

Asami, an excellent student in junior high school, had a hard time in high school. “All the students there were very good,” she says. “They studied all the time, and I lost the energy to keep up; I was making middle, even lower grades. I lost my self-confidence.”

Spending her 16th summer in Washington State — she was in a school program that brought Japanese students to America — gave her the idea to attend a U.S. college. “In Japan, you have to decide your major when you are in high school,” she says. “I didn’t know what I wanted to do.” 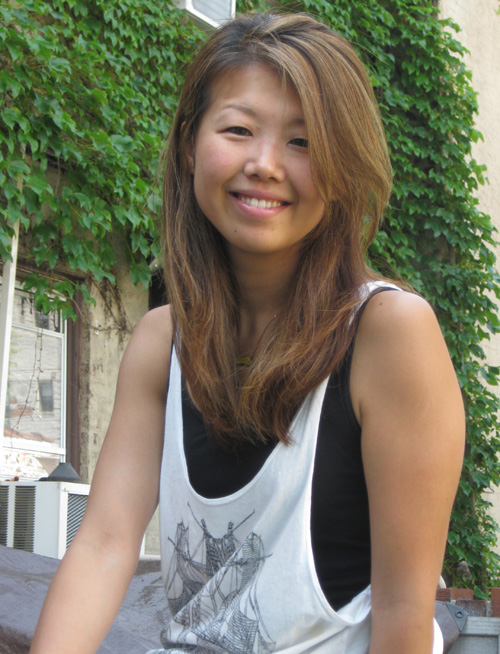 Photo by Nancy A. Ruhling
For Asami, home is where Fumi is.

Although she knew little English, she enrolled at Cedar Crest College, a private liberal arts college for women in Allentown, Pa. “I was young; I didn’t know how hard it was going to be,” she says. “I didn’t know how to order a hamburger in English; how could I pass college? Sometimes, not knowing anything is a good thing.”

But thanks to a very strict teacher in her English as a second language course, Asami thrived. Her senior year, she won a full scholarship and graduated with a double major in psychology and art. She took a jewelry-making course at college, and in her free time, she started designing her own pieces.

“I wanted to be an art therapist, but the college didn’t offer such a degree,” she says. “So I chose majors that were as close to it as I could get.” 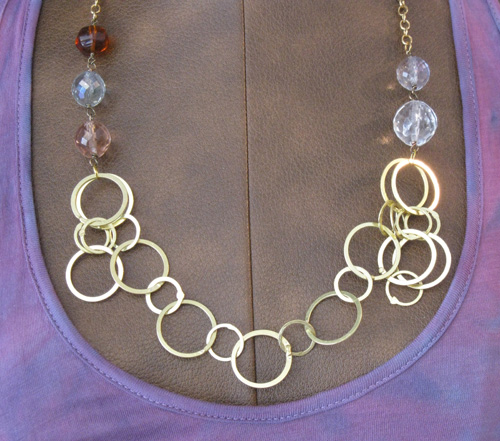 Photo by Nancy A. Ruhling
Asami puts her heart and creativity into every creation.

But after completing an internship as an art therapist, she decided that it wasn’t the career for her. She returned to her family in Japan, where she got a job with a study-abroad program. Fumi was a co-worker, then a good friend. They quit at the same time and became a couple.

“Fumi’s very confident, and I’m not,” she says. “So he really helped me. He does a lot more for me than I do for him.”

It was on a trip to New York City to visit friends that Asami decided to drop in at a job fair. Much to her surprise, a travel agency offered her a position in 2007.

“It was a way for me to come back to America,” she says. “I asked Fumi whether he wanted to come with me. We were not living together at the time. He said he didn’t have any interest in New York and didn’t want a long-distance relationship. He felt we had more opportunities in Japan.” 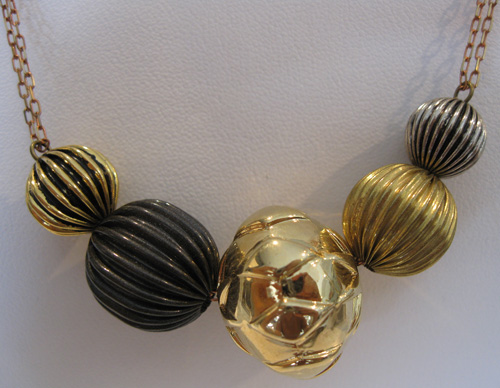 Photo by Nancy A. Ruhling
Asami likes to match the piece to the person.

She was determined to come by herself although the idea frightened her. “I felt I would lose Fumi if I left,” she says, adding that “I thought eventually he would join me. But I’m glad he came in the beginning. It’s usually the other way around: The girlfriend follows the boyfriend.”

Once she got to New York, she took up jewelry-making again, eventually turning her hobby into an income-producing venture. Early this year, she quit her travel agency job — “I knew I was going to be laid off” — and recently took a position with a travel-abroad company that’s similar to the one where she and Fumi worked. She just renewed her working visa, which is good for three more years.

“I don’t want to leave New York right now,” she says. “But my friends and family are all in Japan.”

The jewelry, well, it’s a nice way to make some extra money, and Asami would like it to be nothing more than that, at least for a while. “I don’t want to make it my work,” she says. “I want to do it because I love doing it not because I have to.” 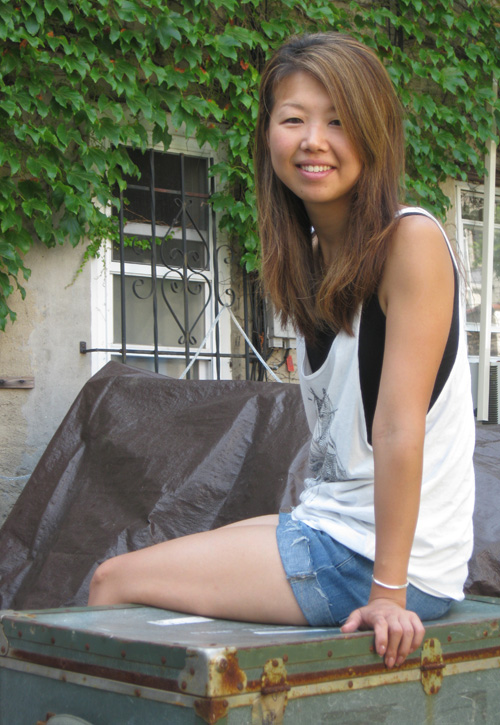 Photo by Nancy A. Ruhling
Next time, perhaps Asami will follow Fumi.

Fumi’s gone only for the day, but Asami misses him. Right by the front door, her shoes are artfully arranged on a five-foot-high shelf. “Fumi says I have too many,” she says, shaking her head in disbelief as she points out one of her favorites, a pair of Vivienne Westwood plastic flats with perky bows on the toes.

She hopes to marry Fumi. But only when they are ready. That could be next week or next year; it doesn’t matter when or where because they will always have each other.